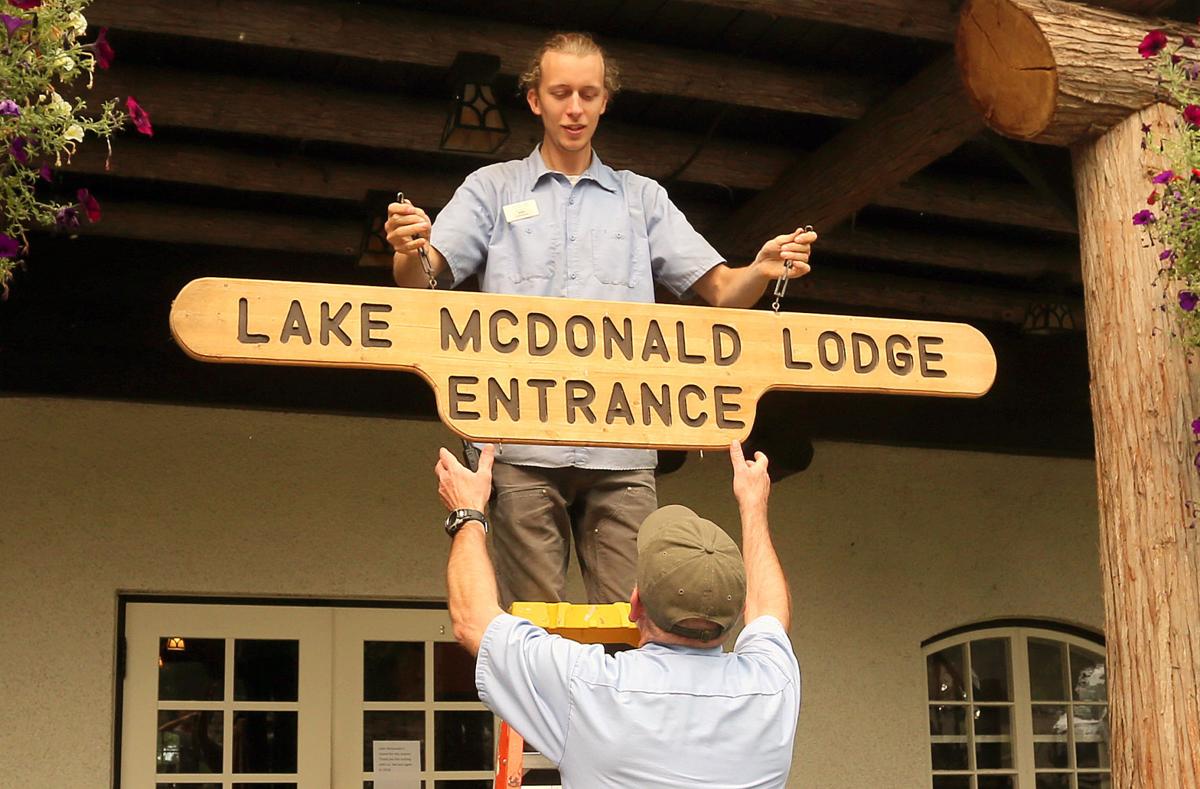 Xanterra Parks and Resorts employees Kody de Lucia and Steve Lungren take down the Lake McDonald Lodge entrance sign Thursday. The company decided to close the Glacier National Park lodge nearly a month early due to the unhealthy amount of smoke that has settled in over Lake McDonald area. 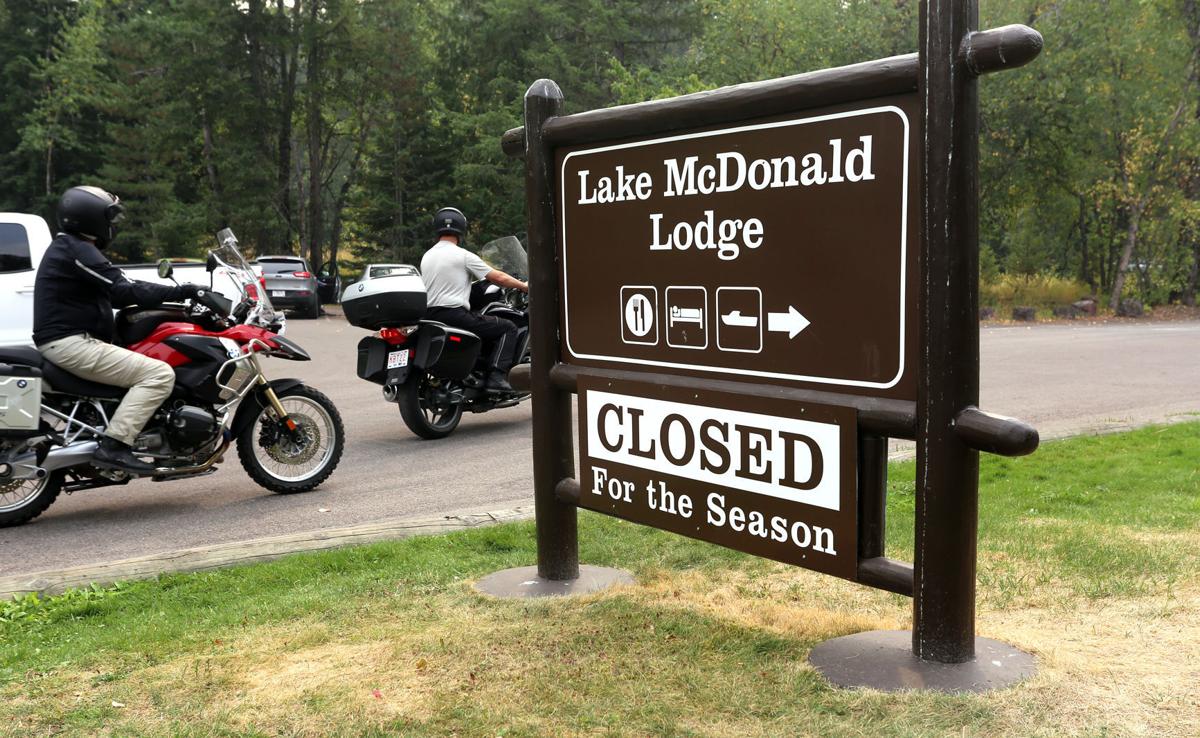 The company that operates Glacier National Park's Lake McDonald Lodge decided Wednesday to close the historic lodge for the remainder of the season after hazardous smoke levels were recorded. 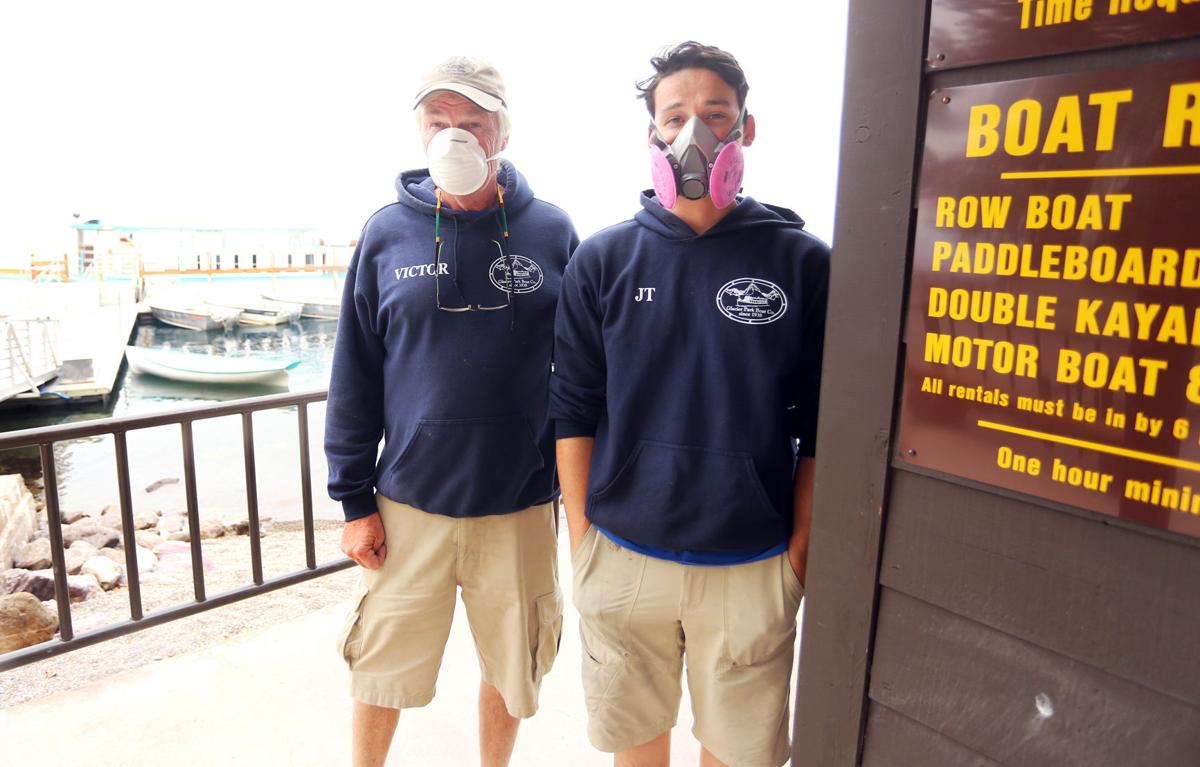 Victor Swenson of New Jersey and J.T. Dolores of Florida have taken to wearing masks while they wait for passengers for the scenic boat tours on Lake McDonald.

LAKE McDONALD LODGE — Sometime after noon, they came for the sign.

By that time, the sidewalks were empty and the parking lot half-full in front of what should have been a bustling center of tourism at Glacier Park’s Lake McDonald Lodge. The two men dressed in utility blues took just a few minutes to set up their ladder and pull down the carved sign that officially marked the end of this summer’s season at the iconic tourist attraction.

The only person near enough to notice was the lodge’s bellman.

Pettit was one of 150 Xanterra Parks and Resorts employees who learned Wednesday that the lodge was closing a month early due the hazardous amounts of wildfire smoke that had made a habit of settling like a heavy cloud over Lake McDonald the past few weeks.

“It's just one of those things that makes you remember that life can change suddenly,” Pettit said. “You just have to roll with the punches.”

The decision to close the lodge for the season wasn’t easy.

As far as anyone can tell, it’s the first time the lodge has ever closed early due to wildfire smoke. In 2003, however, the Roberts fire forced the evacuation of an estimated 3,000 people from the Lake McDonald Valley, including the lodge, Apgar and park headquarters.

This week's decision came after a newly installed air quality monitoring station at the lodge indicated that in the evening and early morning hours, the levels of smoke were beyond the uppermost limits of what’s considered hazardous to human health.

Mark Ducharme, the general manager of Xanterra’s Glacier Division, said the company took the health of both its employees and guests into consideration when it decided to close the lodge almost a month earlier than normal.

“We know there were a lot of disappointed people,” Ducharme said. “For many, their dream vacation had been altered. …The lodge doesn’t have air conditioning. It’s hard for people to be forced to sit inside a stifling historic building due to air quality concerns. There doesn’t seem to be an end in sight.”

The 82-room lodge was booked solid through its normal closing date in late September. The highly sought-after rooms are reserved a year in advance. It normally doesn’t take but a day or two for the lodge to fill when the openings open online.

“On any given day, we expect to have between 160 and 180 people in our home here at the lodge,” Ducharme said. “People love this place.”

The McDonald Lake Lodge is the second of Glacier’s historic structures to close this year due to the lightning-caused Sprague fire first spotted on Aug. 10. The decision to close the Sperry Chalet for the season came shortly after the fire began to spread toward the main trail used to access the chalet.

National Park Service interpreter-turned-fire information officer Diane Sine said people need to remember that heavy layer of smoke is centered on the Lake McDonald area. Other places in the national park aren’t being affected to the same extent.

“Most other places in the park are operating as usual,” Sine said.

People can get a good idea on localized conditions in the park by getting online and looking at the national park’s webcams.

Glacier Park Superintendent Jeff Mow spent part of Thursday morning touring the area around the lodge to talk with employees and visitors.

Standing on the boat dock with the mountain background shrouded in smoke, Mow visited with the three employees wearing masks to protect themselves from the particulate floating in the air.

The decision to close the lodge was “pretty unusual,” he said, and while some questioned the potential of just toughing it, the decision did protect the employees and guests from a heavy dose of smoke.

“It’s not as if we are the only place in the West that’s burning right now,” he said. “This smoke is coming from several different areas right now.”

The employees operating the tour boat know all about the challenges that have come with the ever-increasing amounts of smoke that blot out the scenery that people travel so far to see.

“We had to use the compass to get across the lake the other day,” said J.T. Dolores of Florida. “I’ve seen that happen before in Florida, only it was fog, not smoke.”

Out in the parking lot, Ann Coleman-Specht and her husband, Joe Specht, of Whitingham, Vermont, packed their bags into the trunk of their car. The couple had hoped to spend a second night at the lodge, but an envelope slipped under their door Wednesday night ended that dream.

“Being from Vermont, we know what it’s like to depend on tourism,” Joe Specht said. “We were certainly disappointed with the news, but we’re certainly not angry at anyone.”

They did manage to take in one of the famous red bus tours to Logan Pass, where the smoke was a little less thick and the views a lot more spectacular.

Ducharme said Xanterra is a large enough company that it was able to offer its employees at Lake McDonald Lodge other jobs at properties in both Glacier and Yellowstone. And, working with other local businesses, it also helped its guests to find lodging.

“This is a small community,” Ducharme said. “When something like this happens, everyone pulls together.”

The lodge’s housekeeping manager, Chris Rebouche of Louisiana, said that while decision to close seemed sudden, the company has done well in helping those employees who wanted to continue to work find somewhere to go.

After months of being in the center of one of the busiest places in Glacier Park during a record breaking summer, Rebouche just shook his head at the sudden quiet.

“It’s really bizarre,” he said. “In just one day, look what’s happened. It’s a trip, no doubt about it.”

“I, myself, am looking forward to getting out of here and going somewhere where I can take a deep breathe again,” Rebouche said. “It’s been an experience. That’s for sure.”

Emily Clark of Dallas, Texas decided she was ready to go home after breathing smoke for the past few weeks.

“When I first got here, the air was so clean that I thought it was going to do wonders for my lungs,” Clark said. “After the past few weeks, I’m not so sure about that anymore.”

Clark hasn’t decided if she’ll come back again next year.

“I do feel like when I get back home, that I’m going to dream about this place,” she said. “When the air isn’t filled with smoke, it’s just so beautiful.”

Coverage of the 2017 fire season: One of the worst in decades

Every day, usually twice a day, the Missoulian newsroom produced roundups on the fires consuming tens of thousands of acres in western Montana…

InciWeb is an interagency all-risk incident information management system for wildfire throughout the nation. The system was developed with tw…

Xanterra Parks and Resorts employees Kody de Lucia and Steve Lungren take down the Lake McDonald Lodge entrance sign Thursday. The company decided to close the Glacier National Park lodge nearly a month early due to the unhealthy amount of smoke that has settled in over Lake McDonald area.

The company that operates Glacier National Park's Lake McDonald Lodge decided Wednesday to close the historic lodge for the remainder of the season after hazardous smoke levels were recorded.

Victor Swenson of New Jersey and J.T. Dolores of Florida have taken to wearing masks while they wait for passengers for the scenic boat tours on Lake McDonald.