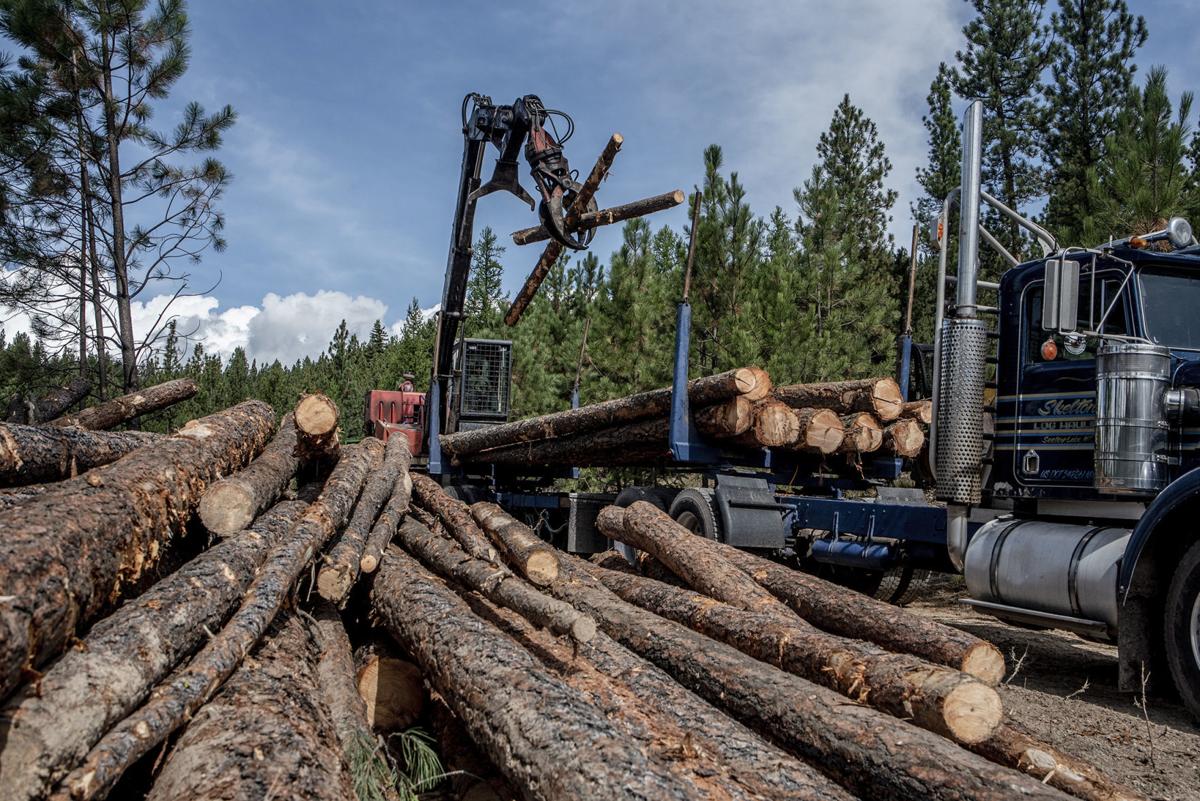 Timber is loaded onto a truck at a work site near Highway 200 on Tuesday. The logs are being used to produce paper chips, part of the Gnome Knob timber sale, a Bureau of Land Management project to reduce fuels in the Wildland Urban Interface. 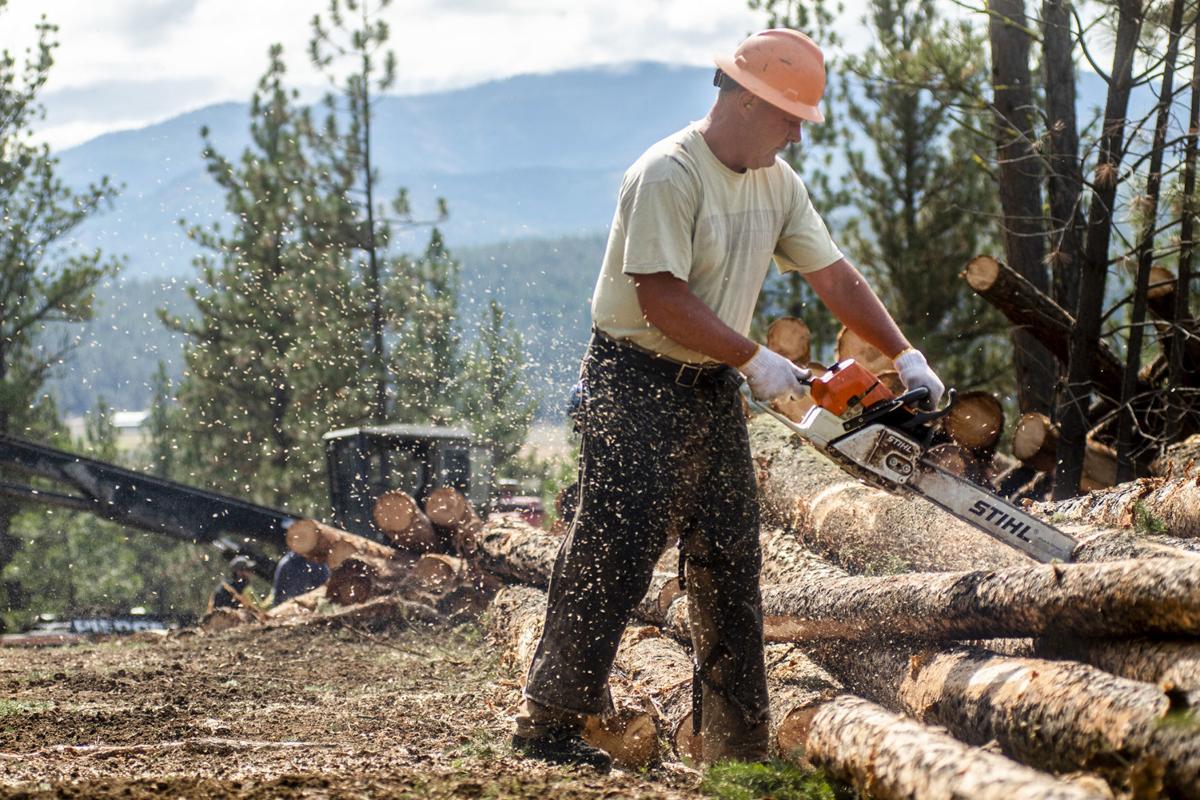 The Bureau of Land Management hired private contractor Blackfoot Forestry Inc. to treat small-diameter trees by using the Designation by Prescription method to identify which trees will be cut down. 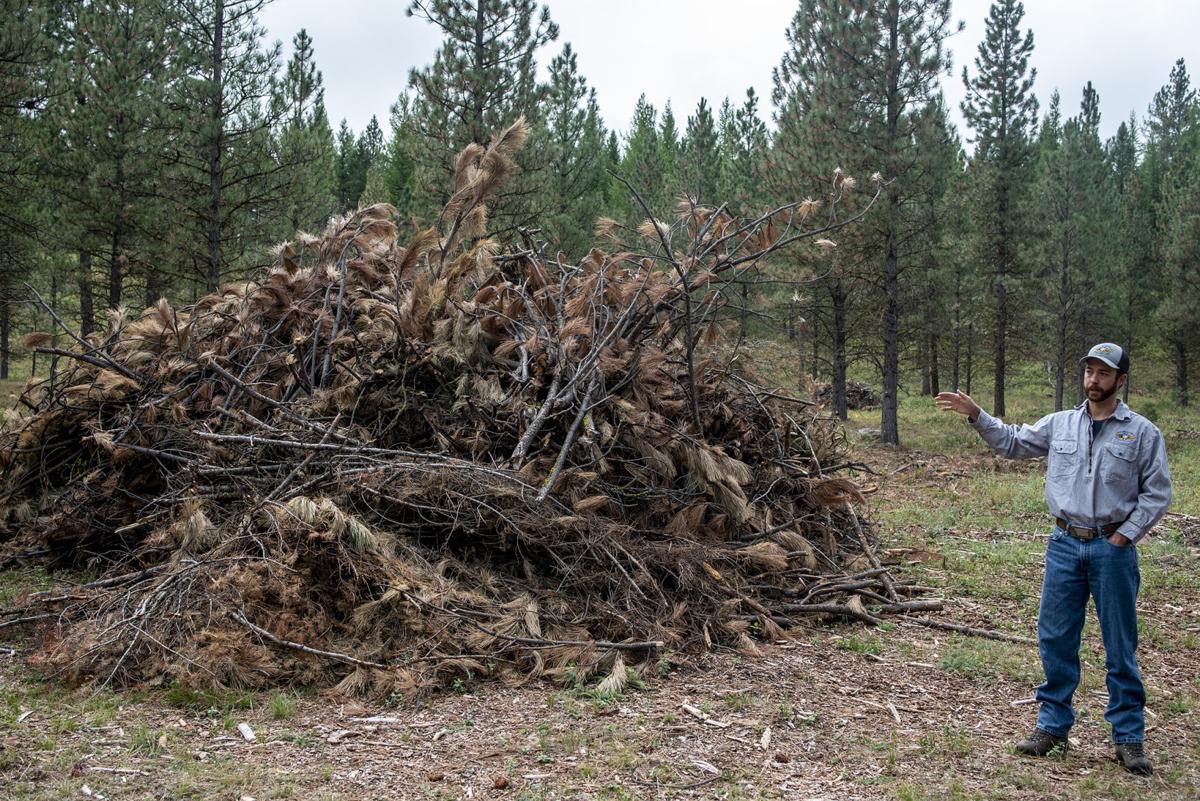 Kyle Johnson of the Bureau of Land Management shows piles of limbs that were cut from tree stands for the Gnome Knob timber sale harvest.

Timber is loaded onto a truck at a work site near Highway 200 on Tuesday. The logs are being used to produce paper chips, part of the Gnome Knob timber sale, a Bureau of Land Management project to reduce fuels in the Wildland Urban Interface.

The Bureau of Land Management hired private contractor Blackfoot Forestry Inc. to treat small-diameter trees by using the Designation by Prescription method to identify which trees will be cut down.

Kyle Johnson of the Bureau of Land Management shows piles of limbs that were cut from tree stands for the Gnome Knob timber sale harvest.

The whirr of Dave Chilcoat’s chainsaw was overwhelmed by the roar of Kevin Troutwine’s skidder as he dragged five logs of various diameters up a draw near the Blackfoot River. Troutwine dropped the load, then his grappling claw grabbed the logs one by one to pull them through the de-limber. He tossed the logs into a pile, and Troutwine backed down the draw for the next load of logs.

Their boss, Henry Fassnacht, watched with a smile on his face. He expects his company, Blackfoot Forestry Inc., will make money on this unusual timber sale that pairs large logs with smaller-diameter ones, removing potential wildfire fuels on public lands and some adjacent private properties.

Earlier in the day, Fassnacht walked through an area already logged with Kyle Johnson, a forester with the Bureau of Land Management, and Michael Albritton, a BLM fuels specialist.

On their left sat a mix of small logs and limbs in dozens of slash piles so small they could fit in large wheelbarrows; the piles were created by smokejumpers, who practiced felling trees and will come back to burn the slash during their off season. On their right were towering slash piles that included only tree limbs, which Fassnacht said will “burn in a flash” once the smokejumpers return next year to finish the work.

As far as the eye could see, sunlight streamed through the now-open forest canopy, but these weren’t in the pattern from a typical logging operation, which might have left three trees per acre. Instead, an enormous larch stood near two Ponderosa pines and a smaller larch. Further away was another opening, surrounded by other mature larch and Ponderosa pine trees. A small house sat upslope, where thick stands of dog-hair fir had been removed in an effort to protect the home against wildfires in the Wildland/Urban Interface, or WUI.

This is part of a new harvest design that marries fuels reduction in the WUI with removal of the small-diameter stands as well as the merchantable large trees, in a practice known as an “ICO” treatment. The acronym stands for Individuals, Clumps and Openings, which try to mimic the historic mosaic patterns left after a wildfire.

“We didn’t tell Henry to cut ‘this’ many trees per acre or ‘this’ far apart,” Johnson said. “That’s one way to get away from timber production as a sole goal. We are doing that within the natural NRV, or Natural Range of Variability. We’re looking for age and class diversity for the remaining trees, instead of them all being the same age, like when they were a plantation for Champion (Lumber Co.), and later Plum Creek.”

It wasn’t meant to be a pilot or demonstration project, but Johnson said it inadvertently became one. It also wasn’t meant to be a timber sale; the initial plan just called for thinning of the forest on the BLM property in part to protect eight primary residences in the adjacent subdivision surrounded on three sides by public lands.

But this eventually evolved into the Gnome Knob Timber Sale.

“One of the neighbors builds garden gnomes, and the name just popped into my head one day,” Johnson said with a grin. “I like to be a little facetious.”

The work was started a couple years ago, and didn’t involve any commercial timber sale on the 370-acre plot when Rich Lane with Willis Enterprises chipping facility in Bonner stopped by and said he could use the smaller logs for paper chips. After a series of meetings they worked out a deal, and Lane acquired the small logs.

“That size is not usually part of a timber sale; they were too small to be of any value,” Johnson said. “What spurred us forward was his interest in the local timber, saying this could work.”

Once the BLM decided to move forward with the timber sale, they didn’t mark the trees that would be harvested. Instead, Johnson and Albritton worked with Fassnacht on a “prescription” for the ICO treatment, telling him generally what they wanted as an outcome, then checking his work periodically to ensure he was adhering to their general plan.

“We wanted to enhance larch reproduction, so anything that’s within tree length of the larch they wanted me to cut,” Fassnacht said. “They wanted to focus on removing the Doug fir, then take the P-pine, and only cut the larch if it was malformed or really overstocked.

“It isn’t what comes out but what’s left behind. The industry has evolved to those requests by either private landowners or agencies. They’re finding out if they get the right operators … they can get the right results.”

Johnson estimated that by having Willis Enterprise involved, the BLM wouldn’t have to spend an estimated $200 to $700 per acre cost for smokejumpers to remove the small-diameter trees. Fassnacht bid $86,000 to pay the BLM for the logs he sold to Pyramid Mountain Lumber in Seeley Lake.

The nonprofit Blackfoot Challenge also stepped in to help some of the landowners' cost of tree removal on their properties as a fire-protection measure.

Signe Leirfallom, the Blackfoot Challenge’s forestry coordinator, said the BLM contacted them early on in the project, wondering if there was interest by the neighbors to use BLM grants allocated through the nonprofit for tree removal on the adjacent private properties.

“There really wasn’t momentum until Henry started working on the BLM side of the fence,” Leirfallom said. “They saw the work he was doing, liked it, and he gained their respect and trust, which was earned by the BLM employees as well. That’s when we stepped in and started processing the grant funding and put projects together with Henry.”

“The outcome is so much better when you can get work done on both public and private property,” Leirfallom said. “The fence line doesn’t really matter when there’s fire coming through or close by.”

Pairing the work on private property with the logging on public lands also brought down the cost for homeowners. Fassnacht noted that just to get a rubber-tired skidder to the job site costs about $600 to $700.

“This time we were here and just down the road,” Fassnacht said. “Mobilization costs on small-acre projects are significant.”

Albritton said the hope is that doing projects like this also can mitigate the cost of wildfire fighting.

“One big target for me was we were in the Wildland Urban Interface,” Albritton said. “We want to create a situation that when — not if, but when — there is a fire here, firefighters will feel comfortable and safe to come in and fight the fire. Generally, that means the fire is on the ground and it’s not conducive to a crown fire.”

They’ve brought groups from the University of Montana, the W.A. Franke College of Forestry and Conservation, and The Nature Conservancy to the site to discuss the lessons learned and develop plans for similar projects in the future.

“We’re trying to export this model to other areas,” Johnson said. “We want to build off this success and use it on the broader landscape.”

Alta: A melody born of rivers and history

ALTA — If you want to sing the Song of Montana, this is the place to be.