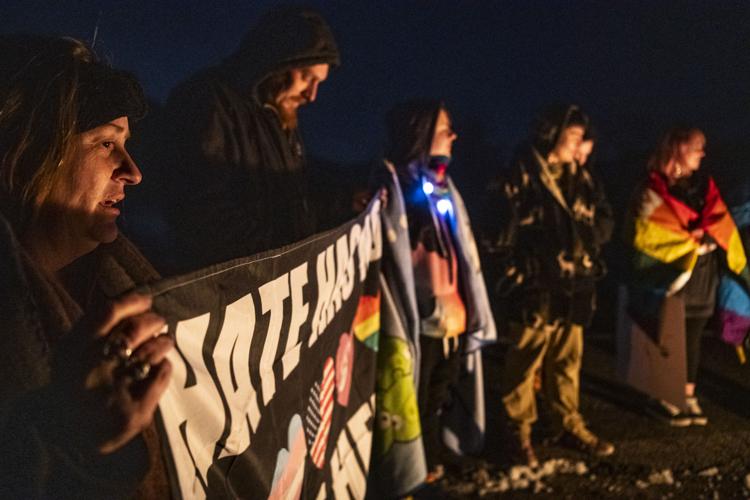 Sam Kelley, a Clinton resident, protests against a church rally in support of Pastor Brandon Huber outside the Clinton Community Church. 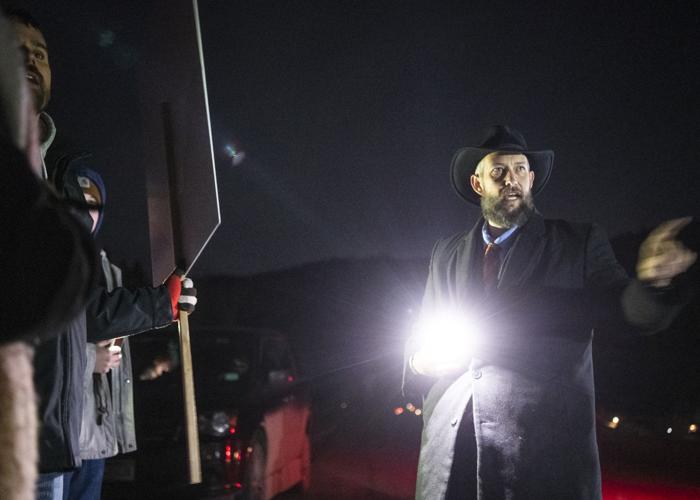 Jordan "J.D." Hall, a pastor at Fellowship Baptist Church in Sidney and publisher of the Montana Daily Gazette, speaks with protesters outside Clinton Community Church in November 2021. 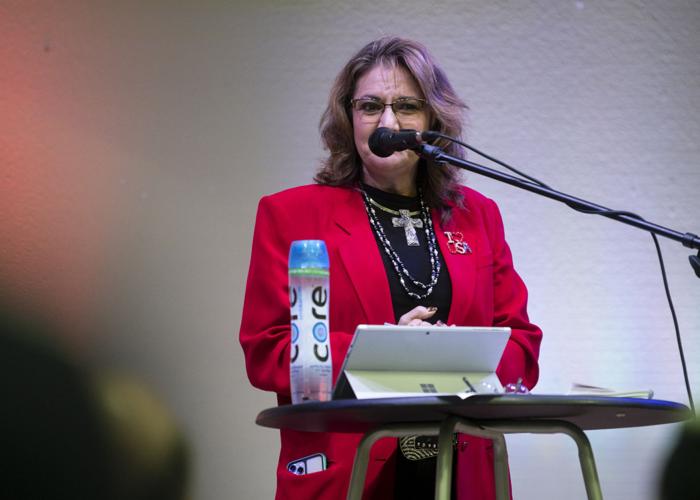 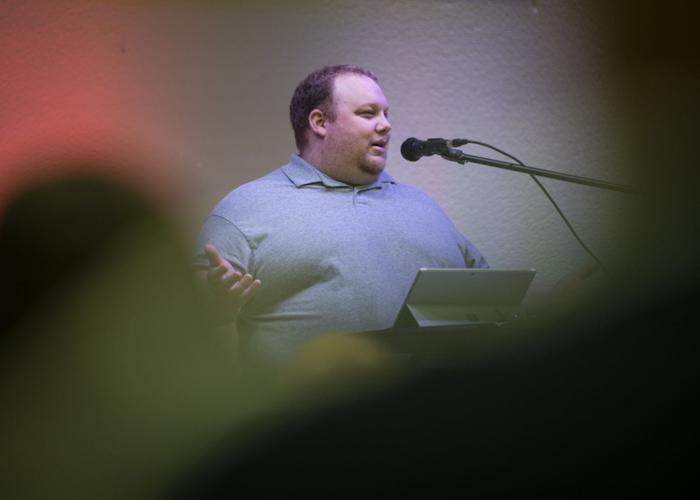 The “God, Country, Family” tour came to Clinton Community Church on Wednesday night, where speakers encouraged attendees to donate money to the church’s pastor to fund his lawsuit against the Missoula Organization of Realtors.

The stop in Clinton focused on “the LGBTQ agenda,” and speakers lined up to express support for Clinton Community Church’s lead pastor, Brandon Huber.

Earlier this summer, the church terminated its relationship with the Missoula Food Bank for its free lunch program after Huber discovered “pride” themed inserts in the sack lunches, saying they were “contrary to the church’s teachings.” The church started its own community lunch program.

In response, a Clinton resident filed an ethics complaint with the MOR that said that Huber “cannot separate his religious bias from his entire person and will continue to be inherently biased against the LGBTQIAS+ community in any and all circumstances.” Huber has been a member of the Missoula Organization of Realtors since August 2020 and works as a part-time agent for Windermere Real Estate in Missoula.

At Wednesday's church event, Huber offered his own thoughts on the situation at hand with the MOR to “set the record straight.”

“We never took food away from gay children. If children decided to not come down that was because the parents would not allow them to. It wasn’t because the church refused them,” Huber said, adding that the church served about 600 lunches from early July to Aug. 20 through its new program.

“The only question that we asked was ‘how many (lunches) would you like?’ We never asked if your child was gay, we never asked their familial status. So where all this is coming from? I have no clue."

Huber filed a lawsuit in Missoula County District Court that claims he was wrongfully accused of hate speech by no longer partnering with the Missoula Food Bank. He has been ordered by the Realtors to attend an ethics hearing in early December, according to the suit. He could be issued up to a $5,000 fine and have his membership terminated.

“Discriminatory conduct, including hate speech, is directly contrary to who Realtors are and should not be tolerated in any profession,” said MOR Chief Executive Officer Jim Bachand in a statement to the Missoulian.

“It will be up to the MOR hearing panel to determine whether any of the matters raised in the complaint constitute a violation based on the evidence presented,” Bachand continued.

In August, the MOR grievance committee said that if the complaint is accurate, it constitutes “potentially unethical conduct.”

Huber said he has received threatening messages that have made his children fear for his safety. He noted that another real estate agent called him to say that Huber is not fighting for himself, but “for every single realtor that is with the National Association of Realtors.”

Huber also serves on the board of trustees for Clinton School District #32. He moved to Montana from Washington in 2017, and became lead pastor of Clinton Community Church earlier this year.

Politicians, others weigh in

The "God, Country, Family" tour is coordinated by the Gideon Knox Group, which publishes the Montana Daily Gazette, and will make six total stops in communities around the state.

“I don’t know if their intention is to target him, I don’t know,” Manzella said about the local Realtor group. “But I think they’ve made an awfully big mistake because our founding documents make it clear that he most certainly has the right to stand on his sincerely held beliefs and I’m actually embarrassed for them, because it is one they’re going to lose.

“This is one we’re going to win,” Manzella continued to an eruption of “amens” and applause from attendees. “My right to live a righteous lifestyle based on my sincerely held beliefs does not end where their choice to live a perverse lifestyle begins.”

She took aim at “alternative LGBTQ lifestyles” and claimed that the LGBTQ community is trying to recruit young people. However, she encouraged those in attendance to approach the topic with “compassion and conviction.”

“We’re not here to whine or complain about this silly ethics complaint and the thoughts about persecution because that is nothing as compared to what Christ went through for us … We’re here to celebrate,” she continued. “We’re here to celebrate Brandon Huber and his stand for God and godliness.”

Manzella went on to say that members of the LGBTQ community like to “play the protected class card,” because queer couples in general have expressed that they’re scared to walk down the street holding hands in fear of possible violence against them for their sexuality.

“I've got to tell you, I think those are normal consequences associated with the choices they made,” Manzella said.

Olszewski took the stand after Manzella and incorrectly referred to Huber as “Justin” multiple times before correcting himself. He said he did not come to the church that night as a political candidate, former state senator, or in any official capacity, but as an individual to support the pastor.

“Regardless of the issue, a decision was made based on faith, which is constitutionally protected,” Olszewski said.

Olszewski encouraged participants to donate to Huber personally to support him and his family during this lawsuit.

“This is the line, if Brandon don’t win and this church don’t win, we don’t win,” Olszewski said.

'This is not our community'

About 15 protesters donned pride flags, a rainbow fish windsock and handmade signs along the road to greet attendees on their way to the church and show their support of local LGBTQ youth.

The protesters were split between a larger group at the intersection of the I-90 overpass and Clown Lane, and a smaller group farther down on Clown Lane near the property entrance to the church.

“This is not our community,” said Sam Kelley, a Clinton resident who helped organize the protest.

Kelley has a child who is in the LGBTQ community who attends school in Clinton, she said.

The protesters raised their signs and cheered loudly as headlights of oncoming cars illuminated the road. Some drivers confronted them, others cheered them on and thanked them for showing up.

“I have a feeling that he’s schmoozing his congregation to grease his palms so we can pay for his attorney,” another protester from Clinton said to the group.

None of the protesters went inside the church that evening because they didn’t want to “violate anybody’s personal space,” Kelley said.

“We just want the community to know that this is not how we feel,” she added.

“Our community has lots of young (LGBTQ) members, and lots of young members who are not represented and can’t speak out at home and their parents are sitting right over there,” she continued, gesturing toward the church. “They need to know that they’re not alone.”

Joe McGraw of Missoula was accompanied by his son and stepdaughter to the protest. He felt compelled to be there because he grew up in Clinton and has family members who are in the LGBTQ community, he said.

The nonprofit organization The Trevor Project, which focuses on suicide prevention efforts among LGBTQ youth, recently released results from it 2021 national survey of more that 35,000 LGBTQ youth.

The survey found that nearly half of LGBTQ youth in rural areas and small towns indicated that their community was somewhat or very unaccepting of LGBTQ people, as compared with just over a quarter of those in urban or suburban areas.

Additionally, queer youth living in rural communities reported higher rates of experiencing discrimination and physical harm as compared with those in urban or suburban areas. Those in rural areas had slightly greater odds of experiencing depression, considering suicide and attempting suicide.

The survey found that access to LGBTQ-affirming schools in small towns is associated with lower suicide risk.

“These data show that we have significant work to do to ensure all LGBTQ youth in rural areas and small towns have access to supportive communities and affirming spaces,” said Amy Green, vice president of research at The Trevor Project. “It’s heartbreaking to see nearly half of these young people report that their communities are not accepting of LGBTQ people. But it also gives me hope that, once again, we see access to LGBTQ-affirming schools helps prevent suicide.”

IF YOU NEED HELP:

Several relatives of Old Person were in attendance to celebrate the occasion alongside current members of Kyiyo and others in the university community.

A series of triggers would allow lifting the universal masking policy as early as the beginning of January, if goals are met.

Brandon Huber is the lead pastor at the Clinton Community Church. He filed a lawsuit in early November against the Missoula Organization of Realtors, which said he had violated their hate speech policy.

The new complaint was filed by a fellow realtor who identifies as part of the LGBTQ+ community, saying the pastor's actions create an environment where the complainant doesn't feel welcome to do business.

A Missoula Organization of Realtors document shows Brandon Huber violated the Realtors’ Code of Ethics. He intends to appeal the decision.

Sam Kelley, a Clinton resident, protests against a church rally in support of Pastor Brandon Huber outside the Clinton Community Church.

Jordan "J.D." Hall, a pastor at Fellowship Baptist Church in Sidney and publisher of the Montana Daily Gazette, speaks with protesters outside Clinton Community Church in November 2021.