A bicyclist turns off the Riverfront Trail onto the California Street footbridge earlier this week, where graffiti has spread from a private wall designated for such to the public sidewalks, lamp poles and across the footbridge. 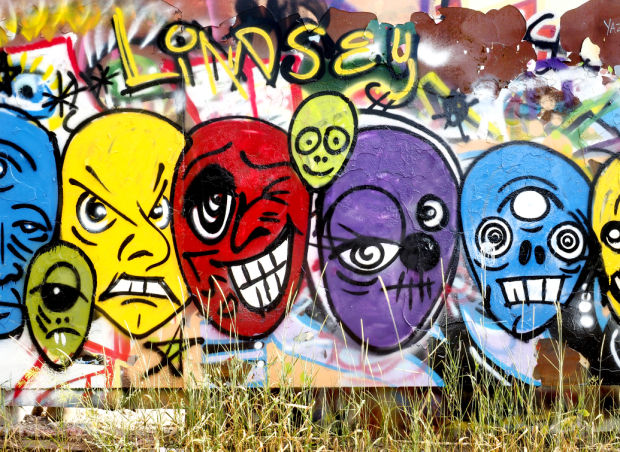 Colorful graffiti covers a private wall at the south end of the bridge.

By MEGAN MAROLF for the Missoulian

A designated wall for graffiti art near the California Street footbridge has spread past its legal bounds onto public property, and that has some residents and officials asking that the wall be removed.

Others, however, don’t see a problem with the expanding graffiti-covered sidewalk on Missoula’s Riverfront Trail and across the bridge.

Rob Scheben, a crime prevention officer for the Missoula Police Department and director of the Graffiti Task Force, said the city hasn’t received any reports about graffiti from the area. The wall is on private property, he said.

“The city doesn’t have any say of what goes on that wall,” he said.

Scheben said he thinks the area hasn’t changed since the wall was built and designated as a graffiti-friendly zone, and said his task force takes care of graffiti at the footbridge in the same manner as elsewhere in Missoula.

A person guilty of illegal graffiti-making is charged with criminal mischief, he said. If the damage is less than $1,500, it’s a misdemeanor; property damage more than $1,500 is considered a felony.

Ellen Buchanan, director of the Missoula Redevelopment Agency, said graffiti has been an issue around the California Street footbridge for years. She said the graffiti keeps spreading farther from the wall and onto the Riverfront Trail, which is part of the Missoula Parks and Recreation trail system.

Buchanan said allowing graffiti on the wall is contributing to its spread.

“Both the Graffiti Volunteer Task Force and Parks try to stay as ahead of it as they can, but the volumes are just overwhelming,” she said.

Emily Bentley, a city councilwoman for Ward 3, said the spread of graffiti has been a problem for a while.

She said the north-facing wall also creates an unsafe area because it is high and narrow, so the area is hidden from view. She said although the task force has helped with Missoula’s graffiti problem, the wall should be knocked down.

“In theory, it’s a good idea to have a wall that’s legal and safe for people to use, but in practice it’s not working, and it’s making the bridge intimidating on the Westside and the Riverfront neighborhood,” Bentley said.

Sgt. Travis Welsh of the Missoula Police Department said graffiti long has been an issue throughout Missoula, particularly on bridges and underpasses.

He said the Orange Street underpass is one example, and also anywhere there’s a blank wall. This could be a business, residence or Dumpster, Welsh said.

Graffiti becomes a problem when people report it, or when someone sprays graffiti on another’s property, he said. But it’s treated differently if the property owner allows it.

“What people do on their own property, as long as it’s not illegal, is their own business,” he said.

Welsh said reports of graffiti have dropped in the past several years, and he attributes that to the Graffiti Task Force response. If the police department hears a report of something illegal, they notify the Task Force who then cleans it up.

The Task Force is doing a good job of scrubbing off or painting over the graffiti, he said.

“It’s not necessarily a citywide problem, I mean you’ve got to add a little perspective,” Welsh said.

Police say graffiti is down in Missoula, share tips for prevention, cleaning

There’s a thin but clear line between street art and misdemeanor.

If Alex Regnier had painted his most recent creation on, say, the Orange Street underpass, he’d be in big trouble.

In an effort to make the Orange Street underpass safer and cleaner for pedestrians, local agencies and volunteers on Wednesday gave the walkwa…

When Mike Parker walks through the graffiti-strewn Orange Street underpass in uptown Missoula, he sees the spray-painted expletives and crude,…

A bicyclist turns off the Riverfront Trail onto the California Street footbridge earlier this week, where graffiti has spread from a private wall designated for such to the public sidewalks, lamp poles and across the footbridge.

Colorful graffiti covers a private wall at the south end of the bridge.