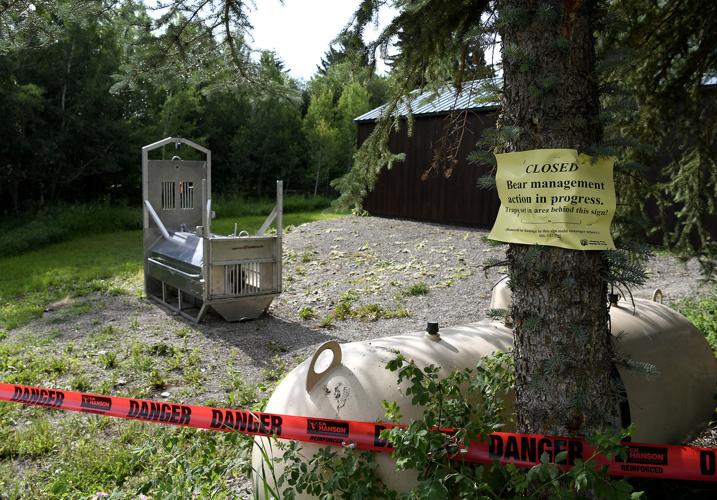 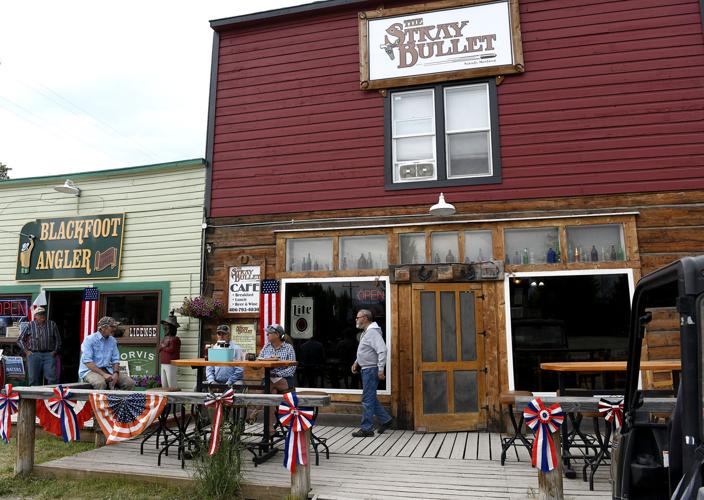 Businesses in Ovando were open the day after the attack. The mauling remained a topic of discussion. 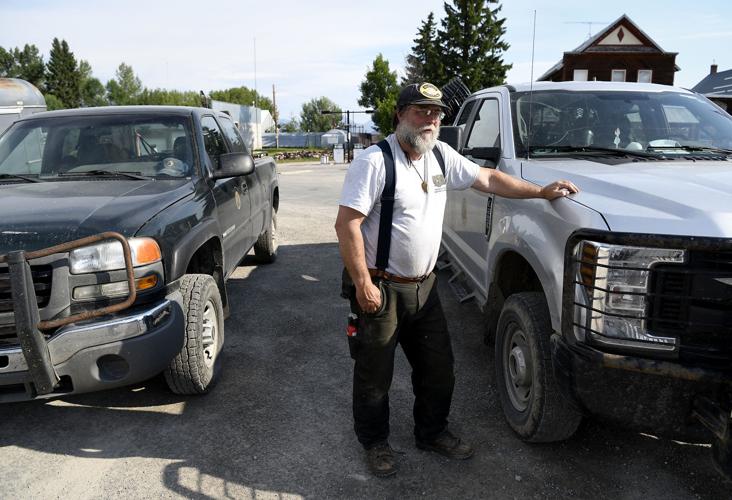 Jamie Jonkel, a Montana Fish, Wildlife & Parks wildlife management specialist, helped  search for the bear that was involved in the fatal Ovando mauling. 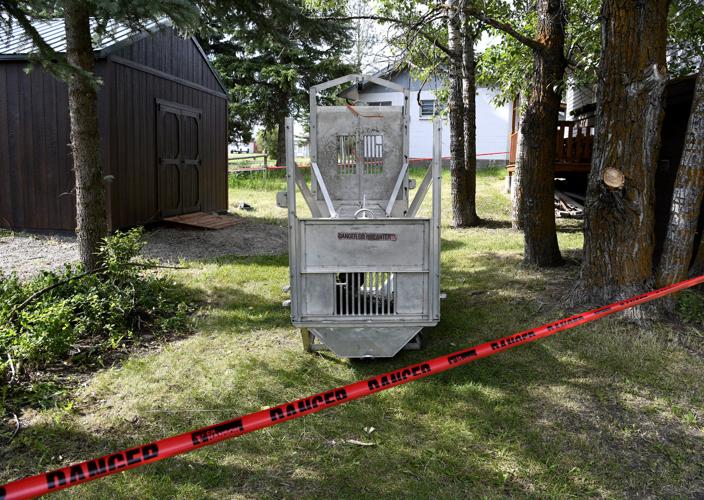 One of five bear traps that was set up in Ovando shortly after the attack.

OVANDO — Red “Danger” tape surrounds the shady patch of grass at the corner of Pine and Short streets where a grizzly bear killed a bicycle camper before dawn Tuesday.

Two steel culvert traps, each big enough to hold a riding lawnmower, sit in the campground where the tents used to be. Signs on the trees warn, “Closed: Bear management action in progress.”

Progress is slow, but not for lack of trying. The 100-person town between the Bob Marshall Wilderness Area and the Blackfoot River has seen its population jump 20% in the past 48 hours with Powell County Sheriff’s deputies, Montana Fish, Wildlife & Parks specialists and others involved in the search for the suspect bear.

Two helicopters started sectoring the skies before dawn Wednesday, using special infrared optics to peer through the underbrush covering numerous creeks and river bottoms around Ovando. By late morning, the spotters had found lots of deer, but no grizzly.

“The fact it was right in town — that’s pretty messed up,” said Travis Thurmond, who co-owns the Blackfoot Angler fishing shop with his wife, Kathy Schoendoefer.

Their business sits across the street from the Brand Bar Museum, whose grounds have become a well-known rest stop for long-distance bicycle tourists. Many of them use an automatic camera on the Blackfoot Angler building to take selfies, which Schoendoefer posts for their friends to see. On Monday night, the camera caught a blurry image of the suspect grizzly walking through town.

What happened next remains under investigation. Powell County Sheriff Gavin Roselles identified the victim as Leah Davis Lokan, 65, of Chico, California. Friends on social media noted Lokan was a well-known bicycle long-distance rider when she lived in Sandpoint, Idaho.

What is known is the bear entered Ovando about 3 a.m. Tuesday. Lokan was in her tent near a tent with another couple when the grizzly awakened them, according to FWP spokesman Greg Lemon.

“The three campers removed food from their tents, secured it, and went back to bed,” Lemon wrote in a press release on Wednesday. “At about 3:30 a.m. the two people in the tent adjacent to the victim were awakened by the sounds of the attack. They exited the tent and sprayed the bear with bear spray. The bear pulled the victim from the tent during the fatal attack.”

Based on the photo image, other witness reports and scene evidence, the bear appears to be a 400-pound young adult grizzly. It also raided a chicken coop in Ovando the same night.

FWP bear specialists spent Tuesday night in Ovando monitoring four culvert traps, with a fifth in reserve in case they got word of grizzly activity nearby. They were planning to be on scene Wednesday night as well. The campground remains closed until at least Sunday.

“This is bear country — we all understand that,” Thurmond said. “I know what they’re about. There’s lions and bears and wolves here. You’ve got to be aware of your surroundings. Some people are not comfortable being in a place where there are predators about. For me, that’s what keeps me on my toes. I enjoy knowing it’s a functioning wild system.”

That said, Thurmond personally doesn’t feel comfortable sleeping in a tent outdoors, unless he’s with a friend who has a brave watchdog, he said. He has frequently encountered bears while guiding clients on fishing trips, but they’ve all separated without incident.

The last person anyone can recall dying by grizzly in the Ovando area was an elk hunter in the Blackfoot-Clearwater Game Range in 2001. But the number of grizzlies has been steadily increasing since they were listed as threatened under the Endangered Species Act in 1975.

Howard Fly has lived in Ovando for 60 years, and used to guide grizzly hunters when the bear was still a big-game animal.

“Back when they were hunted, they were very hard to find,” Fry said. “They’re not stupid at all. I think hunting would make a big difference. It would actually help bears survive, if we hunted them in limited numbers like we did in the past.”

Even after the grizzly was put on the Endangered Species List, Montana continued its big-game grizzly hunt until 1990, to remove what state wildlife officials considered “surplus” bears. That ended after the state failed to show in court that it actually had enough grizzlies to sustain a viable population.

Biologists and wildlife managers still debate whether hunting trains grizzlies to avoid humans, or whether excessive killing in the 1970s and 1980s reduced bear numbers to nearly undetectable levels. Fry added that at the time he was an active guide, Montana had barely half the population of humans it holds today.

“Even though these kinds of events are extremely rare, we take them very seriously,” Wilson said. “Our deepest condolences go out to the family of the victim, and we’ll be working with the community to craft solutions and build tools that helps us prevent these tragic events. There’s always risk. There’s risk driving Highway 200. My hope is we can learn from all of this.”

As of Wednesday evening, no sign of the suspect grizzly had turned up. FWP's Lemon said searchers were pretty sure it had left the Ovando area, but the traps would remain on scene until better evidence appeared.

Bicycle tourists continued riding through town, often surprised to see a bear trap occupying the spot they planned to stop. A sign in the Blackfoot Angler listed visitors from New Hampshire, Florida, Michigan, California, Georgia, Minnesota, Illinois, New York and Massachusetts. Summer has at least two months to go, and a town like Ovando depends on tourist dollars to stay healthy.

At the Stray Bullet Cafe, Renee Faltings was finishing breakfast as the riders rolled by.

"Last year, we had five bear encounters and they all ended exactly as you'd expect — the bears did what they're supposed to do and went away," she said. "I think we need to figure out a way to work with them, because they're not leaving."

A lawsuit pitting habitat needs for grizzly bears and bull trout against road access for loggers and motorized tourists has resolved in favor of the animals in the Flathead National Forest.

To understand the “Interagency” in the Interagency Grizzly Bear Committee, consider Bear 863.

Grizzly bears and bull trout will lose much of what they gained from decades of protection in the Flathead National Forest if a new management plan gets OK’d, wildlife advocates argued in federal court on Wednesday.

A federal Wildlife Services agent with night-vision equipment shot and killed a grizzly bear early Friday morning that is suspected of fatally mauling a camper in Ovando on Tuesday.

DNA from the grizzly bear killed near Ovando last week matches samples taken from the scene where a camper was killed three days earlier, according to state analysts.

Bear put down by game warden after entering Missoula houses

"You can't have bird feeders up this time of year in areas where bears are adjacent. It's like putting a piggy bank on your porch and being surprised that someone steals your piggy bank."

No horses, or fish, participate in Dead Fish Polo, and usually nobody dies.

One year after a grizzly bear fatally mauled a sleeping bikepacker in Ovando, official safety recommendations could be hard to implement given the self-reliant nature of bike-packing along the Continental Divide.

Businesses in Ovando were open the day after the attack. The mauling remained a topic of discussion.

Jamie Jonkel, a Montana Fish, Wildlife & Parks wildlife management specialist, helped  search for the bear that was involved in the fatal Ovando mauling.

One of five bear traps that was set up in Ovando shortly after the attack.