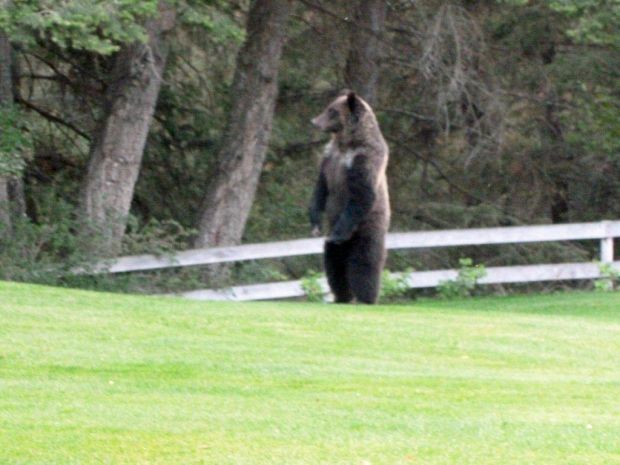 This photo of Ethyl the wandering grizzly bear was taken shortly before she was captured near Lake Blaine in 2012. 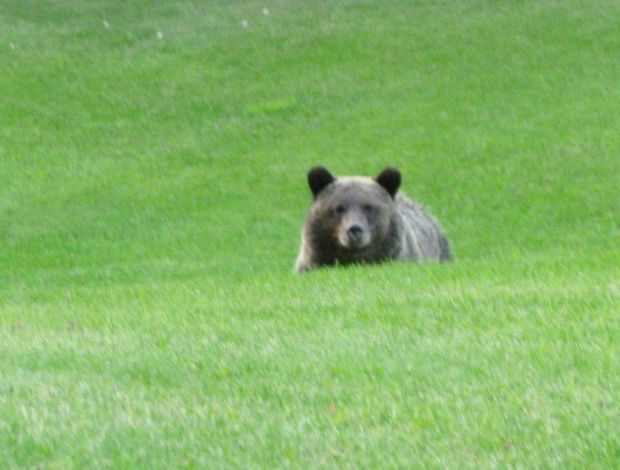 This image of a grizzly known as Ethyl near Lake Blaine became famous for a 2,800-mile trek around northern Montana and Idaho. 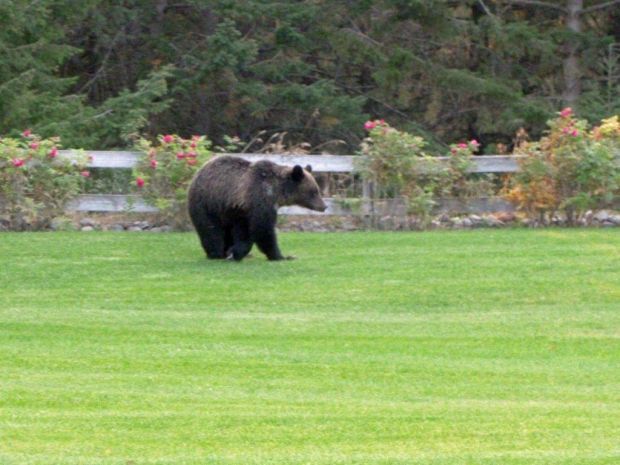 Ethyl the grizzly bear was photographed near Lake Blaine shortly before being captured in 2012. She then traveled 2.800 miles across Montana and Idaho. 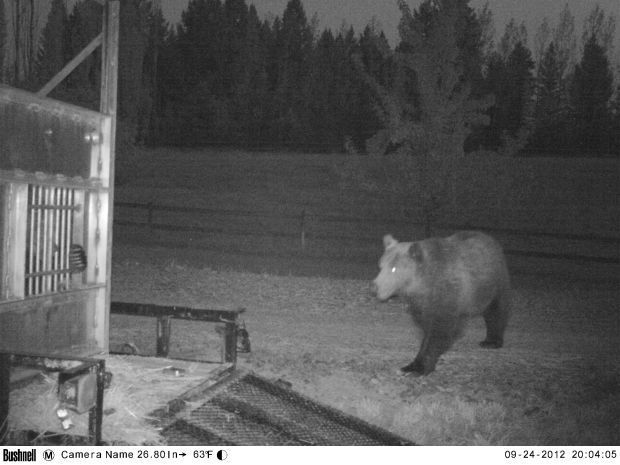 A grizzly sow nicknamed Ethyl inspects the trap holding her 2-year-old cub shortly before taking off on a three-year, 2,800-mile ramble that has biologists fascinated. 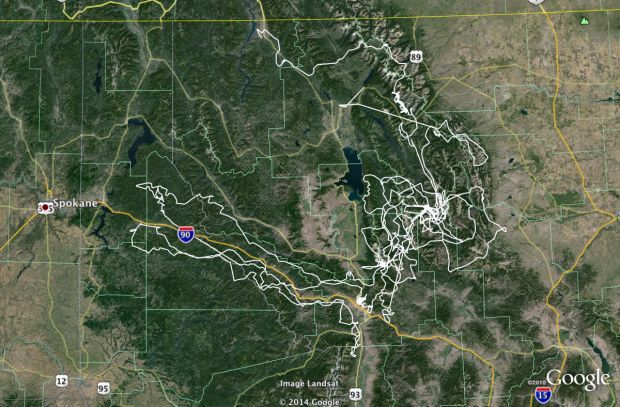 A GPS collar recorded Ethyl the grizzly bear's 2,800-mile wanderings through Montana and Idaho, including visits to Kellogg, Idaho, Missoula, Florence and Eureka.

The roomful of biologists had lots of funny ideas why Ethyl the grizzly bear logged 2,800 miles arcing from Coeur d’Alene, Idaho, past Florence and Missoula and eventually up to Eureka by way of Glacier National Park.

Maybe she ate a bad chicken. Or she was looking for someone she couldn’t find. Or she couldn’t find her back to her home range northeast of Bigfork – the one place she noticeably missed in the three-year ramble.

“The one thing we can say is this was not representative of normal bear movement, and certainly not female grizzly bear movement,” said Chris Servheen, grizzly bear recovery program coordinator for the U.S. Fish and Wildlife Service. “She had some really bizarre travels.”

Actually, there’s one more thing we can say about Ethyl. The 20-year-old sow proved grizzly bears can cross interstate highways, major city boundaries, municipal landfills and residential backyards without getting into trouble with humans.

That’s important to the wildlife managers of the Interagency Grizzly Bear Committee, whose Northern Continental Divide Ecosystem subcommittee members were meeting in Missoula on Tuesday.

It adds hope that the big omnivores can coexist with people as their numbers start pushing out of their wilderness core habitat.

Montana Fish, Wildlife and Parks biologist Rick Mace joked that Ethyl seemed to be traveling with a “Be People-Aware” brochure and a can of people-spray on her journey. Apparently she’d learned her lesson after being caught and collared in 2006 and 2012.

Ethyl spent most of her life around Lake Blaine, between Bigfork and the Swan Mountains. After her first capture while raiding an apple orchard, she was relocated to the Wounded Buck Creek drainage along Hungry Horse Reservoir.

She came back and was traveling with her 2-year-old cub when she was busted again in the apples in 2012. This time, the duo was moved to the more remote Puzzle Creek drainage.

And then Ethyl took off.

She prowled around the Bob Marshall Wilderness for a while, including a few peeks at the Rocky Mountain Front between Lincoln and Augusta. Then she moved down to the Mission Mountains and the Jocko Lakes area.

Passing Arlee, she headed for the northern fringe of the Bitterroot Mountains and then made a deep stab into Idaho along the Interstate 90 corridor.

She moved north of Wallace, Idaho, past Kellogg and nearly to Coeur d’Alene before apparently denning somewhere in the Panhandle. An article in the Kellogg newspaper reported someone seeing her moving 10 miles away from the high school.

Her collar turned off for the winter on Nov. 25, 2013, to conserve battery power. She started sending signals again in April, moving back along I-90 but south this time, past Superior.

The collar’s GPS only logged several locations a day, but it appeared Ethyl punched straight up and over the steep and snowy mountains dividing Fish and Petty creeks.

Reaching the southern fringe of Missoula on May 13, she turned south through the Blue Mountain Recreation Area and made it to Lolo in about three hours. She stayed in the foothills of the Bitterroot Mountains as far south as Florence.

“On May 20, she goes basically right through downtown Lolo and we didn't have any sightings,” Servheen said. “She was minding her own business, walking around trying to figure out where she is.”

Ten days later, she had shot back into Idaho as far as Coeur d’Alene again. Then she turned around, safely crossed over Interstate 90, and headed back for Missoula. She went right past the Republic Services landfill but only sniffed the garbage.

She also cruised some apple orchards in the meadows east of Evaro Hill, as well as some hunters’ gut piles in the fall, moving back to sleep in the Rattlesnake Wilderness nearly four miles away every night.

Then she barged up the Bob Marshall again, bypassing her Lake Blaine stomping grounds, headed for Glacier National Park. After some time there, Ethyl moved west toward Eureka. She lost her collar on Oct. 17.

“That’s a total distance of 2,800 miles,” Servheen said. “The only place she didn't go in the Northern Continental Divide Ecosystem was the Blackfeet Indian Reservation.”

New Christ statue in Brazil will be taller than Rio's

New Christ statue in Brazil will be taller than Rio's

Northern Continental Divide grizzly bears made it through 2014 without one dying at the hands of a game warden.

A crucial piece of wildlife habitat in the Ninemile Valley has been protected through the Vital Ground Foundation and Missoula County.

Grizzly bear on the move in Missoula neighborhood

Dave Harper takes his 700-pound grizzly bear for a ride through a Missoula neighborhood Tuesday afternoon. Harper, a metal sculptor in Darby, …

Grizzly bears have boundary issues. In northwest Montana, about a thousand of them wander the Northern Continental Divide Ecosystem.

NOXON – Grizzly bears will not be severely impacted by proposed mining operations around the Cabinet Mountains Wilderness, the U.S. Fish and W…

From almost four miles away, the grizzly bear appeared to have picked up the elk carcass’ stench.

Yearling grizzly bears busted for getting into trouble and relocated are not any more likely to offend again than bears with a clean rap sheet.

Grizzly researchers meet in Missoula Tuesday; Ethel on the agenda

Grizzly bear experts from throughout western Montana will gather in Missoula on Tuesday to compare notes on their latest observations.

CONDON – With a can of bear spray strapped to a Montana Grizzlies belt, Lee Boman got ready to publicize a place known for isolation.

When it comes to managing nature, humans aren’t naturals.

The first thing you need to know about bear spray is that it works: Field studies show it’s far more effective than firearms at stopping a bea…

Montana went without a traffic death over the last three days of 2017 and finished the year with 186 fatalities, the lowest count since 1989.

Fenced off and boarded up, a 40-foot-high natural geothermal mound behind the state hospital at Warm Springs looms tall in Montana history.

This photo of Ethyl the wandering grizzly bear was taken shortly before she was captured near Lake Blaine in 2012.

This image of a grizzly known as Ethyl near Lake Blaine became famous for a 2,800-mile trek around northern Montana and Idaho.

Ethyl the grizzly bear was photographed near Lake Blaine shortly before being captured in 2012. She then traveled 2.800 miles across Montana and Idaho.

A grizzly sow nicknamed Ethyl inspects the trap holding her 2-year-old cub shortly before taking off on a three-year, 2,800-mile ramble that has biologists fascinated.

A GPS collar recorded Ethyl the grizzly bear's 2,800-mile wanderings through Montana and Idaho, including visits to Kellogg, Idaho, Missoula, Florence and Eureka.