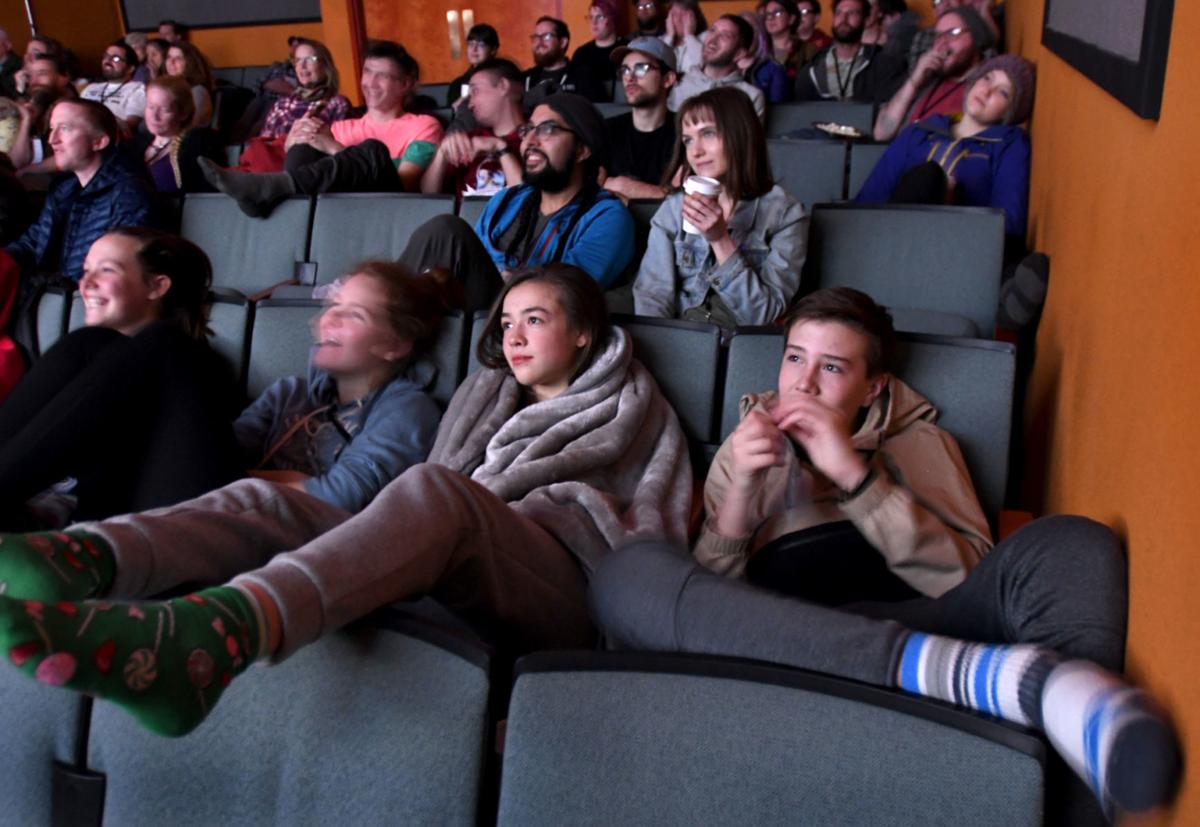 Dressed in sock feet, sweat pants and blankets for the long ordeal, Clara Tallent, Lauren Dick, Annie Squires and Trey Mattson (left to right, front row) sit through the third of six consecutive showings of the movie, Groundhog Day, Friday at the Roxy Theater. The theater challenged moviegoers who sat through all six showings of the movie without distractions — "looking at your phone, cracking a book, falling asleep, leaving the Roxy premises, losing your mind and hollering at the screen, etc." — to win a Cosmic Membership at the theater, good for a year's worth of movies and popcorn. 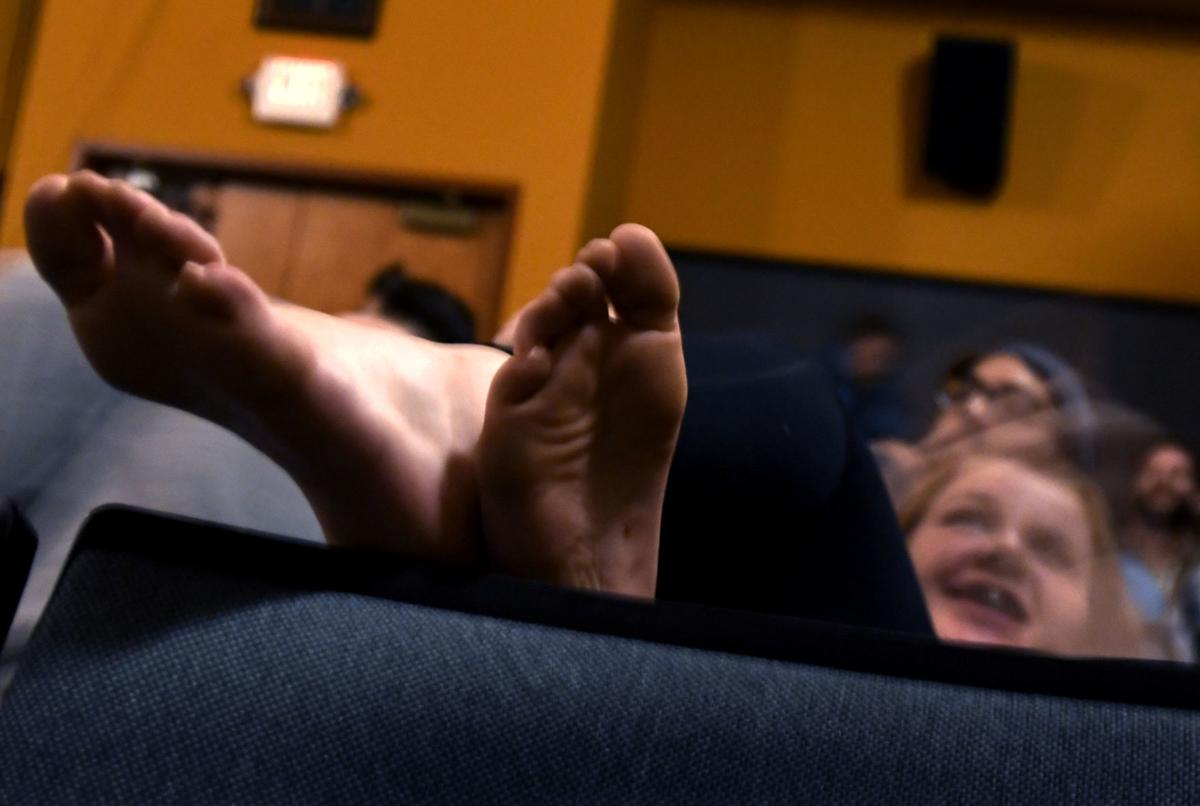 A moviegoer puts her feet up for the beginning of the third of six consecutive showings of Groundhog Day.

Friday, Groundhog Day, more than 40 people did something really stupid.

They sat through the Roxy Theater’s Groundhog Day marathon, where contestants watch the 1993 comedy six times in a row, from 11 a.m. to 11 p.m. The prize was a year of free movies and popcorn at the Roxy.

The rules: no phone usage during the movie, no sleeping, no leaving the theater during the showing and you must sit through the credits every time. That left about 15 minutes between each showing to use the bathroom or get more popcorn.

The movie, about a weatherman who gets stuck living the same day, Groundhog Day, over and over and over, is repetitive to the max. There is no way Sonny and Cher’s “I Got You Babe,” which plays every time Bill Murray’s character wakes up, will ever mean anything to me again outside of this movie.

It started out really fun. I ignored my boss’s jokes about Stockholm Syndrome. Oh boy was I wrong.

The first showing was great. “Groundhog Day” is funny, interesting and enjoyable. My friend PJ, who skipped work to be there, felt the same way and we were both excited for the second viewing.

Roxy manager Mike Steinberg, along with a couple of employees, did regular patrols through the theater, making sure the rules were being followed. After the first show, he let us know that Punxsutawney Phil saw his shadow this year. (Just like in the movie!) Six more weeks of winter, but only five more viewings of “Groundhog Day.”

The viewing was over before I knew it. This was starting to feel easy, but I talked strategy with some fellow watchers just in case.

It was hard to know whether to lean into trying to dig more out of the movie as the day went on, or to just disengage and stare at the screen. In the end, both ended up happening out of sheer desperation.

A Roxy employee told me around 50 people had started the first show, but it was now down to 44. I overheard someone say the last time the marathon was held, only two people finished. I got nervous.

Watching the same movie six times in a row is a great way to make the day just fly by.

Other marathoner strategies: one woman did yoga between showings, a group of high schoolers skipping class broke out the blankets and pillows.

I tried to pay more attention during this showing and just came up with a list of inane observations.

I don’t like this movie anymore. The marathon was accomplishing its goal of making me feel like I’m living one long, repeating day.

Midway through this viewing, I got confused and thought we’d already watched a scene, because, well, we had, just two hours earlier. I laughed at scenes not because they’re funny, but because I laughed every time before.

I was very thankful when this showing ended. The rest of the crowd was with me, as the end-of-movie applause broke out earlier and earlier before the credits rolled.

Also, Bill Murray was starting to look like a groundhog.

PJ and I were not looking forward to watching this movie again. A Roxy employee informed us that this showing was sold out, so all the marathoners squeezed together to make room. A guy sitting in my row couldn't believe how easy the whole marathon thing sounded. I dislike that man.

Another person said they didn't want to sit through the marathon because it would ruin the movie for them. Smart.

My only note for this show — my head is starting to hurt.

In actuality, the packed theater saved us. Instead of being the predicted nadir of the day, the added viewers gave new life to the movie at a much-needed time. I was reminded that “Groundhog Day” is a good movie. Bring on the final show!

A wave of dread hit me when the opening credits rolled. I didn’t want to watch it again.

The last show was by far the hardest. My body started fighting back. My eyes had trouble staying open. I couldn’t focus on the movie, my legs hurt and my stomach started feeling weird after eating only popcorn and sweets all day.

About halfway through this viewing I whispered to PJ that I legitimately couldn’t remember what parts of the movie we’d seen. There was no longer any separation between viewings. They’d morphed into one very long day.

As the movie wound down I was startled to feel sad during certain scenes, realizing I wasn’t going to be watching them again right after. The jokes about Stockholm Syndrome were less funny now.

And then it was over!

I felt sick. After six viewings of “Groundhog Day,” the possibility that I would wake up the next morning and be reliving the same day seemed all too real. I tried not to think about it.

I woke up Saturday feeling like Bill Murray in the last scene, when he wakes up to find the repeating curse is broken.

“Do you know what today is?” he shouts. “Today is tomorrow!”

University of Montana women’s soccer coach Mark Plakorus, whose resignation was announced Tuesday, was asked to leave after a UM investigation…

A cheat sheet to arts and cultural events happening around Missoula this week.

Dressed in sock feet, sweat pants and blankets for the long ordeal, Clara Tallent, Lauren Dick, Annie Squires and Trey Mattson (left to right, front row) sit through the third of six consecutive showings of the movie, Groundhog Day, Friday at the Roxy Theater. The theater challenged moviegoers who sat through all six showings of the movie without distractions — "looking at your phone, cracking a book, falling asleep, leaving the Roxy premises, losing your mind and hollering at the screen, etc." — to win a Cosmic Membership at the theater, good for a year's worth of movies and popcorn.

A moviegoer puts her feet up for the beginning of the third of six consecutive showings of Groundhog Day.