Three conservation groups are taking a second run at blocking a federal plan for managing bull trout populations, saying the plan will lead to fewer fish than when they were listed as a threatened species.

Save the Bull Trout, Friends of the Wild Swan and Alliance for the Wild Rockies allege that the recovery plan put forth in 2015 by the U.S. Fish and Wildlife Service ignores both the best available science and the federal agency's own previous findings about the bull trout status and what they need for recovery.

Arlene Montgomery with Friends of the Wild Swan said the current plan has no population targets or habitat standards, and that it’s “not a road map to recovery but a road map to extinction.”

“Basically, it says they will manage threats, but without any criteria on how to determine whether you have managed the threats or not,” Montgomery told the Missoulian on Tuesday. “If you’re not managing your population and (don’t) have some sort of demographic idea of what recovery is, how do you know that you have managed that threat?” 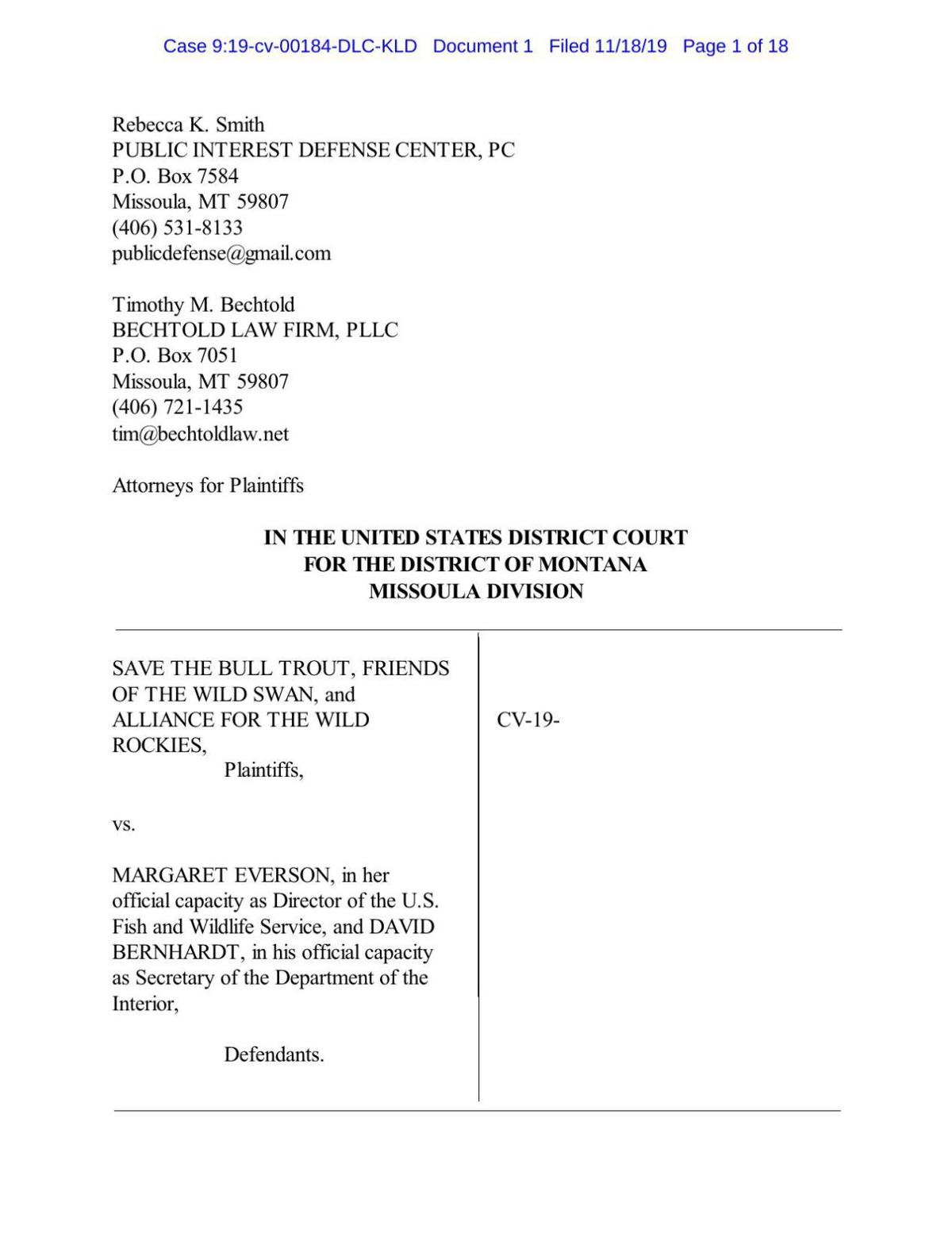 Bull trout historically were abundant in Montana, Idaho, Oregon, Washington, California and Nevada. But the number of the cold-water fish plummeted in the past few decades due to habitat loss, sedimentation and warming waters.

The recovery plan is especially important now, Montgomery said, as the U.S. Forest Service is updating forest management plans that involve bull trout habitat. Both the Lolo and Bitterroot national forests' management plans haven’t been revised since the late 1980s.

“You can see where weaker recovery standards are leading to weaker forest plans,” Montgomery said. “It’s not trickling down but is cascading down. It’s really important for recovery plans to be a road map.”

A spokesperson for the U.S. Fish and Wildlife Service didn’t return a phone call or email seeking comment on Tuesday afternoon.

The previous lawsuit alleged the U.S. Fish and Wildlife Service didn’t do enough to protect the bull trout’s cold-water habitat from global warming. In that case, conservation groups also alleged the recovery plan lacked hard data and metrics, along with quantitative criteria, and would actually speed up bull trout extinction.

A judge ruled that the 2015 plan was not a final agency action, but just described management actions, along with time and cost estimates to achieve conservation and survival of bull trout. As such, the groups could sue under the citizen lawsuit provision of the Endangered Species Act.

Montgomery called that decision “a technicality.” In his June 2017 ruling, Oregon U.S. District Court Judge Michael Mosman wrote that the groups would be allowed to refile the claims if they could “assert additional facts that would demonstrate a violation of a nondiscretionary duty” and provide a basis for the court’s jurisdiction.

In the newest lawsuit, the groups say the Endangered Species Act requires that the recovery plan consider the same factors the U.S. Fish and Wildlife Service did when listing the bull trout as a threatened species. Those include:

• The present or threatened destruction, modification or curtailment of habitat;

• The adequacy of existing regulatory mechanisms;

• Other natural or manmade factors affecting its continued existence.

The recovery plan is supposed to manage and ameliorate the primary threats so bull trout can exist into the foreseeable future.

However, the groups note that the Fish and Wildlife Service itself determined that habitat degradation and fragmentation plus the blocking of migratory corridors by roads, culverts or dams was a factor in the decline of bull trout. It also was harmed by warmer water temperatures, along with sediments or pollutants; introductions of non-native fish species; and climate change.

“The impacts have been well-documented over a long period of time,” said Mike Garrity, director of the Alliance for the Wild Rockies, in a news release. “Yet, the recovery plan issued by the Fish and Wildlife Service fails to clearly identify and address those threats.

“Fact is, the ‘plan’ doesn’t even call for actually monitoring bull trout populations to see if they are recovering, continuing to decline, or even test for genetic inbreeding.”

The Seeley Lake Ranger District plans to move forward with a second salvage sale for trees on lands burned during the 2017 Liberty fire.

After the burn: Landscapes regenerate with a little help

SEELEY LAKE — We pause in the truck as the red fox crosses snow-covered Dunham Creek Road in front of us. It turns to stare boldly as we rumbl…

ELBOW LAKE — A plan to remove a wall of rocks is roiling the waters at this small lake on the Clearwater River.

The Center for Biological Diversity filed a formal notice of intent to sue the Trump administration over the Endangered Species Act.

Federal agencies have agreed to consult with one another over management of bull trout in the East Fork of Rock Creek and in the St. Mary River drainage.