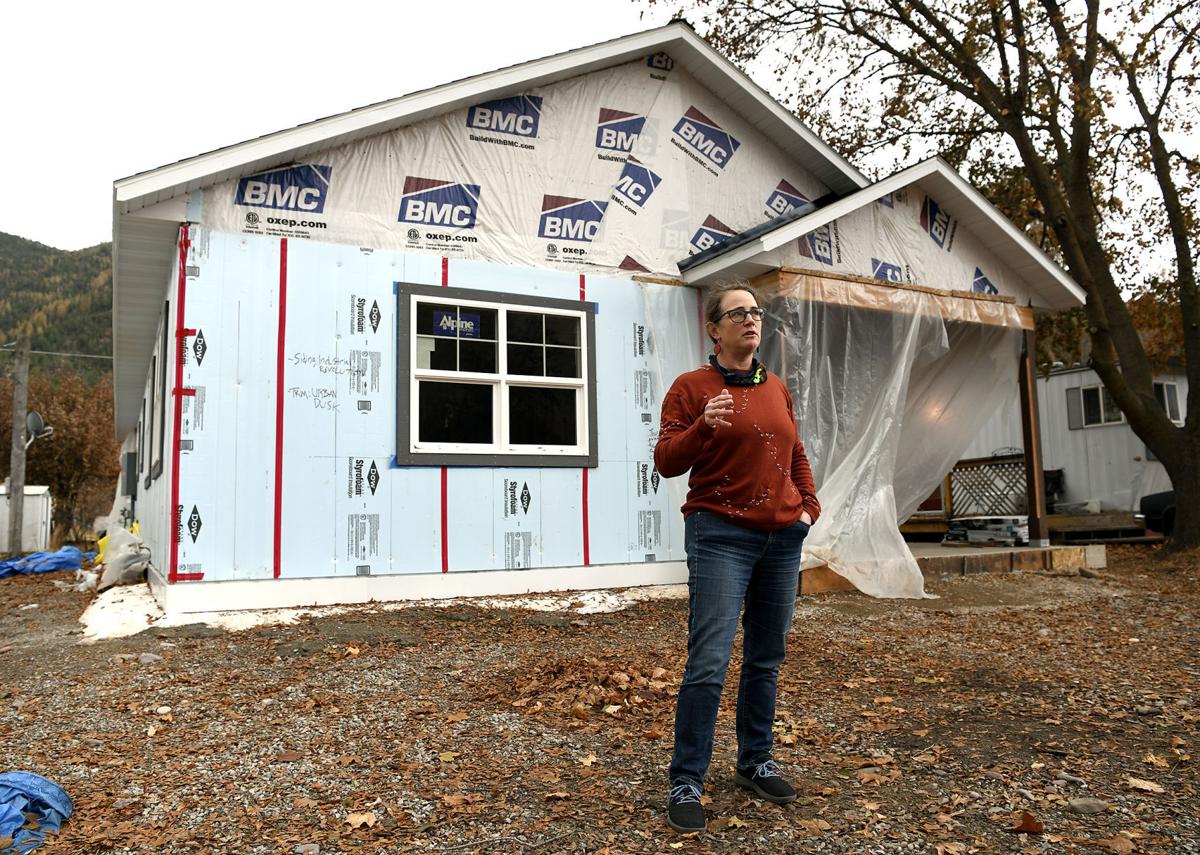 Heather Harp, the executive director of Habitat for Humanity of Missoula, stands in front of one of the organization's homes being built in East Missoula on Thursday. Harp said Habitat hopes to build 30 homes a year by 2030, and that one of the biggest hurdles to overcome in building affordable housing in Missoula is finding land to build on. 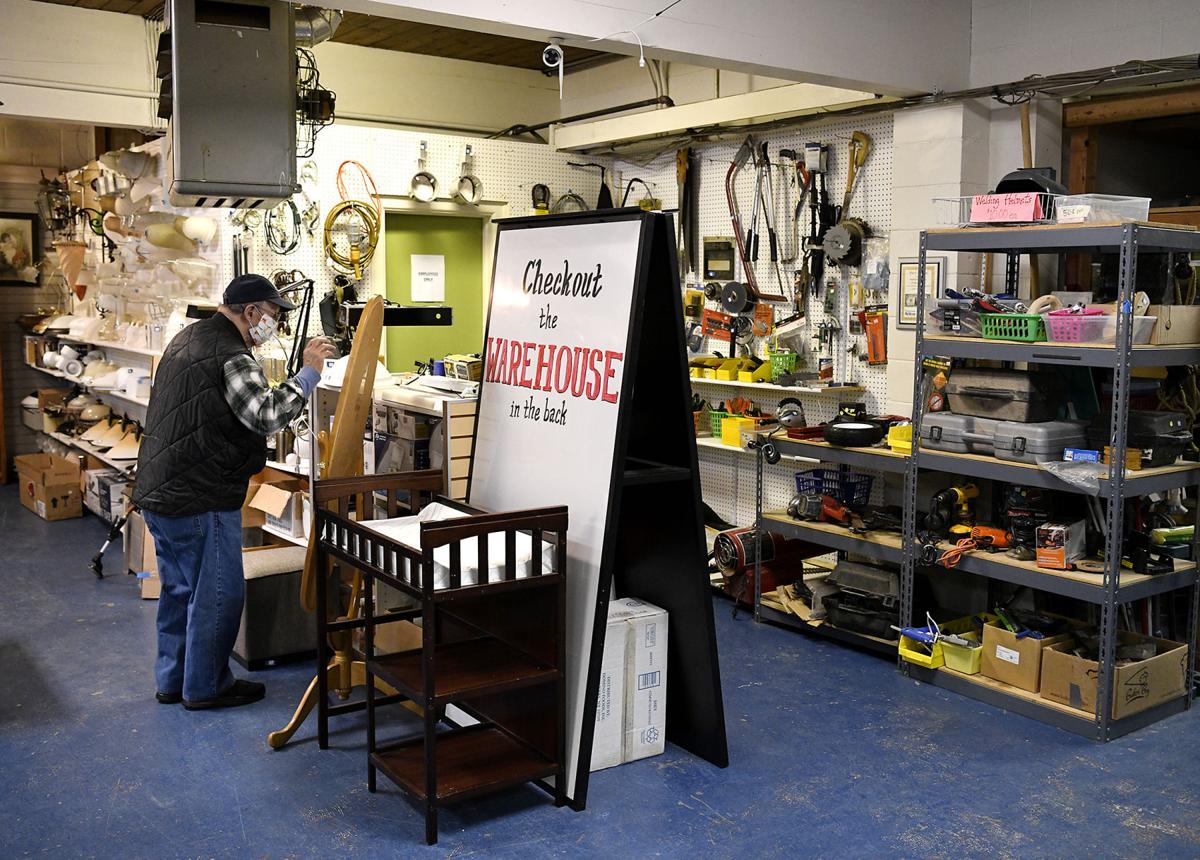 Joe Walker looks over goods for sale at Habitat for Humanity's ReStore business in East Missoula on Thursday. ReStore takes donations of goods and sells them at a reduced price.

Heather Harp, the executive director of the nonprofit Habitat for Humanity of Missoula, readily admits that the "30 homes a year by 2030" plan she announced on Thursday is "ambitious and audacious." Yet she believes it's also achievable.

"We've been averaging two homes (built) a year for the past 29 years," she explained. "Next year is our 30th anniversary. We're launching right now a campaign to build 30 houses every year by the year 2030. And it's going to be incremental, but we're going to get there."

Her goal is to increase the stock of affordable housing in Missoula by finding ways to get buildable land at below sky-high market costs. Her organization is well-versed in building houses that are relatively affordable compared to market-rate costs, but finding the land has always been the problem. She believes that developers in the community want to help, and she knows that landowners in the community want to help because she's seen generous donations come in before.

"I believe that people in Missoula understand our lack of affordable housing issue, they want to help but they don't know how," Harp said. "So we're working on putting together a land acquisition development committee. It is my dream team of the experts in this community, whether they're engineers, architects, land use planners or attorneys, that can really help us identify where we can find some places within our code that we can tweak to make homeownership possible for many more Missoulians."

Harp also is a member of the Missoula City Council, and has heard from developers and concerned citizens about the lack of not only affordable housing, but housing in all income ranges in the area. She said due to population growth, Missoula needs to build 800 homes a year and the private market is only producing 500 a year. So she wants Habitat to take on 10% of that 300 gap and hopes that for-profit partners and government agencies will collaborate and help.

"I suspect that there are other allies of ours that are looking for that kind of leadership and will come along with us," she said. "We know we can't do it by ourselves."

Some areas of the country experiencing high housing prices have implemented mandatory inclusionary zoning, which means developers have to set aside a portion of their new developments as affordable housing and usually pass the cost on to the price of the market-rate housing. Harp believes that method is a "stick" rather than a "carrot."

"Most people don't like being told what to do, developers included," she said. "Developers also by and large, they have to make things pencil. They are not the evil demons people make them out to be. Because remember, every one of us with a roof over our head only has that roof because a developer built that house. So if we want more affordable housing maybe we have to work with developers in a different way to present a carrot."

She believes many developers want to be part of the solution without being hit with a "stick," so she's formed a committee comprising various partners to look at options. She thinks eventually, developers will cooperate and allow Habitat to access land at a very reduced price, or perhaps even for free, so Habitat can build.

Harp said her organization can build homes for about $150,000 if you don't include the land and some of the labor. They use volunteer labor and land donations and other mechanisms to do that, and Harp believes it can be scaled up.

"If we can manage to do that, that's very achievable for people earning around $15 an hour to be a homeowner," she said. "That's extraordinary. So we know that part of the model works. We have to figure out a way to make more of that happen."

The $150,000 home, therefore, would be tucked in with market rate construction. And because of the high-quality construction Habitat is committed to, it wouldn't stand out "like the sore thumb people might think it would," according to Harp.

"Fundamentally, (developers) know we have an issue, and they don't want to be a problem-maker, they want to be a problem-solver," Harp said. "This is their way, at least I visualize and believe, that they can help us achieve that while achieving their own goals. It is a win-win."

There are other creative solutions as well.

"We have a lot of single-family housing in Missoula, we also have a lot of people in their senior years who are living in four and five bedroom houses and it's one or two people left," she said. "And yet they don't want to move out of their treasured neighborhood right? They want to downsize but they can't find that."

Harp said one creative solution might be to build Accessory Dwelling Units that could be owned rather than rented on those single-family lots. For example, a Community Land Trust could be set up to make sure one home on the lot is permanently affordable.

Pehan said her research shows forcing developers to build affordable housing only works in communities with a high level of subdivision development and where housing prices compared to wages are far higher than they are in Missoula.

"This risk is, in our market, we still have many homebuyers earning 100% and 120% of the average area income," Pehan told the Missoulian last year. "If as a result of enacting (mandatory) inclusionary zoning, we are adding $30,000 to $50,000 to market-rate housing, we are pushing people in Missoula out of the market in exchange for a small number of income-restricted units, so that's a very real risk to the market."

Last week, the City Council’s Land Use and Planning Committee voted unanimously to confirm Pehan as the director of a new office, called Community Planning, Development, and Innovation, as part of the city's effort to make more headway in housing development as well.

Harp made the "30 homes a year by 2030" announcement at Habitat's 58th home, which is under construction in East Missoula. It will house a mother and two children, and each child will get a separate room. Harp said studies show that kids who have their own room to study are much more likely to get an education and become homeowners themselves one day.

Harp knows that Habitat's work flies a little under the radar, but she's hoping this new plan will attract more collaboration. Their home construction program isn't the only part of the organization that isn't well-known, either.

The nonprofit also operates the Habitat ReStore in East Missoula, which employs people with barriers to employment elsewhere. The store takes donations of home building materials, furniture, fixtures and other goods and sells them at a reduced price. Harp said her managers have estimated that the store keeps perhaps a dozen dumpster loads of materials from going to the landfill each week while also providing an affordable place to buy used equipment, tools and housewares.

Ken Cropp, a staff member who's worked at the store for years, said many people don't realize East Missoula has such a place.

"A lot of people that come in never knew the place was here," he said. "It's basically people driving by or word-of-mouth. Satisfied customers that tell the story to others. But that's a slow process too."

Like the ReStore, Habitat's new plan to build 30 homes a year will require donations, collaborators and people willing to pitch in, Harp said. She tells the story of how one woman in East Missoula happened to chat with a couple ReStore employees and decided with her family to donate the land for the 58th home. Harp is hoping to replicate that on a broader scale.

We are looking for property owners who can align themselves with our mission creating a win-win-win for you, our partner families, and the community," she said. "We welcome anyone who wants to join our table of problem-solvers with their time, money, property or voice.  After all, the quality of life we all treasure depends upon us all to work together."

The Debate Over Vaccine Passports

Californians 16 and up now eligible for vaccine

Californians 16 and up now eligible for vaccine

Fauci, Jordan clash over what it takes to reopen

Fauci, Jordan clash over what it takes to reopen

With huge subdivisions west of Reserve Street in the works and immense pressure on builders to create even more homes, the City of Missoula has reorganized its housing, community planning and development offices.

Time to invest in innovative solutions to housing

"Builders all around the country have figured out how to work within the parameters of inclusionary policies, and we should be able to expect the same amount of creative problem solving from our talented local builders."

The City of Missoula and the Poverello Center are opening a new winter homeless shelter near Southgate Mall that will drastically increase capacity for those in need.

"Unfortunately, with a high waiting list and stuff like that, landlords can pick and choose who they want to rent to," said one property manager.

"The overall temperature is this sort of heightened frenzy," said a local real estate agent and former Missoula City Council member. However, at least one set of data shows price increases are just following a years-long trend.

A man attacked a police officer with a knife, and the officer shot the man, according to a news release from Missoula police.

The director of the Missoula Redevelopment Agency said Thursday she's excited about a possible $20 million project in the Northside neighborhood that would include permanently affordable housing.

Shopping local during the pandemic holiday

Local stores are looking to keep shoppers at ease during the holiday season with safety precautions and extra services.

Mark Thane: A conversation with one of Missoula's new state lawmakers

"It's really critical for health insurance to not always be tied to employment, because when unemployment spikes there needs to be a vehicle to continue to get health services."

Heather Harp said she could hardly believe it when she opened the ordinary white envelope.

Heather Harp, the executive director of Habitat for Humanity of Missoula, stands in front of one of the organization's homes being built in East Missoula on Thursday. Harp said Habitat hopes to build 30 homes a year by 2030, and that one of the biggest hurdles to overcome in building affordable housing in Missoula is finding land to build on.

Joe Walker looks over goods for sale at Habitat for Humanity's ReStore business in East Missoula on Thursday. ReStore takes donations of goods and sells them at a reduced price.