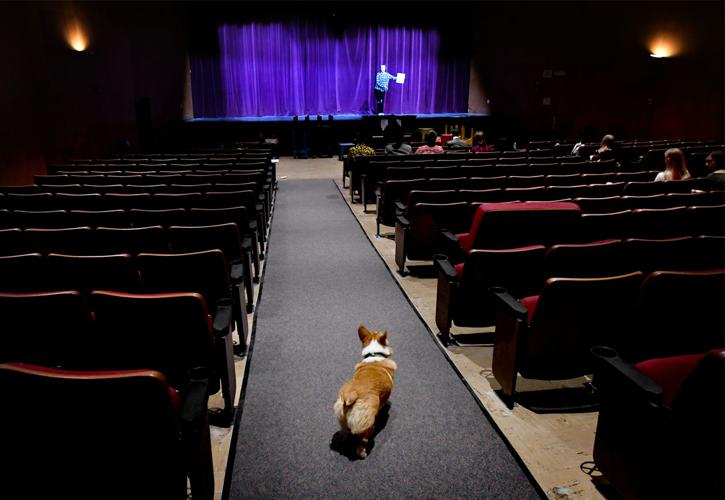 "Hank," a corgi belonging to Sentinel High School's drama teacher Katie Cassidy, watches rehearsal of a solo Monday afternoon while the students were practicing their production of the musical, "How to Succeed in Business Without Really Trying." Hank generally only attends weekend rehearsals, but since Monday was a day off, he came along for the show. 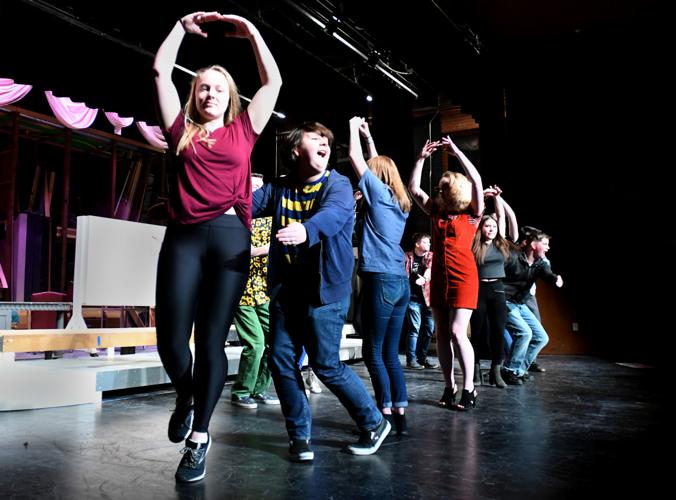 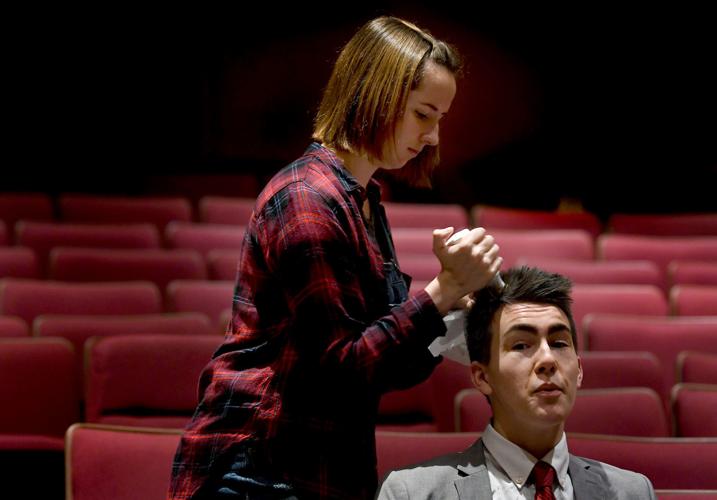 Monday was a vacation day at Sentinel High School. But the cast and crew of its spring musical spent five hours onstage, polishing numbers with titles like “Coffee Break” and “A Secretary is Not a Toy.”

Both are part of the lineup in Sentinel’s production of "How to Succeed in Business Without Really Trying," Fred Loesser’s 1961 musical satirizing mid-century corporate America. The lead role, J. Pierrepont Finch, is played by senior Stephen Clements.

Smartly dressed in a gray suit and blue bow tie, Clements told the Missoulian before rehearsal that he’s been involved with every Sentinel show since his freshman year, and predicted that “this is going to be a great way to end my high school theater” career.

The show, which won both a Tony Award and a Pulitzer Prize after its initial release, follows Finch’s journey from window washer to chairman of the board of the World Wide Wicket Company — guided by a self-help book titled "How to Succeed in Business Without Really Trying."

“I really enjoy how bright and consistently positive he is,” Clements said of his character. “I feel he really does have that joy and positivity in his heart.”

A few years ago, English and drama teacher Katie Cassidy saw a Broadway production of the musical, starring Daniel Radcliffe as Finch, “and I have loved the show ever since.”

This year, she and vocal music teacher Jessica Franks decided it was time for a Sentinel version. The school now has some especially strong male actors, she said, and the show’s critique of office culture is as relevant as ever.

“There’s a very specific line between women as secretaries and men as businessmen,” she said, “and we talked about how it’s very suiting to the #metoo movement.”

The show drew a cast of about 30 and a crew of about 15. Since February, they’ve been busy building sets, designing costumes, choreographing dance numbers, and rehearsing every day after school.

Sentinel’s ongoing renovations added some challenges this year, said junior Peyton Smith, who heads the show’s costume department. With the school-owned costumes locked away in shipping containers, “it’s been a lot of borrowing from other schools, going to second-hand stores and working with what the actors own,” she said.

But Smith considers all of that time well spent. “I think I like musicals the most because they draw the biggest crowd to work on them,” she said. Cast member Mena Carrara-Ackermann also said it had been a bonding experience. “I like how it’s a very accepting community … we just have a lot of fun together, and we feel like what we’re doing is important, so we work hard.”

That, predicts Cassidy, will be clear to everyone in the audience.

“High school performing arts in Missoula are top-notch,” she said. “If people from the community come to the show, they are going to be absolutely blown away by the talent of these students.”

Each week on a rotating basis, the Missoulian visits a private or public school in the Missoula region to see what’s new in the halls and within the walls of our learning institutions, especially the ideas or people making each campus unique. Contact K-12 education reporter Cameron Evans with your suggestions at 523-5241 or cameron.evans@missoulian.com.

Musicians have long flocked to Missoula for the city’s vibrant arts and culture scene. The migration of musicians, along with those born and r…

Missoula may be a beautiful city, but it has one of the worst air quality ratings in the country.

About 30 students in Sentinel High School’s carpentry class got a bit of harsh reality Monday morning.

"Hank," a corgi belonging to Sentinel High School's drama teacher Katie Cassidy, watches rehearsal of a solo Monday afternoon while the students were practicing their production of the musical, "How to Succeed in Business Without Really Trying." Hank generally only attends weekend rehearsals, but since Monday was a day off, he came along for the show.