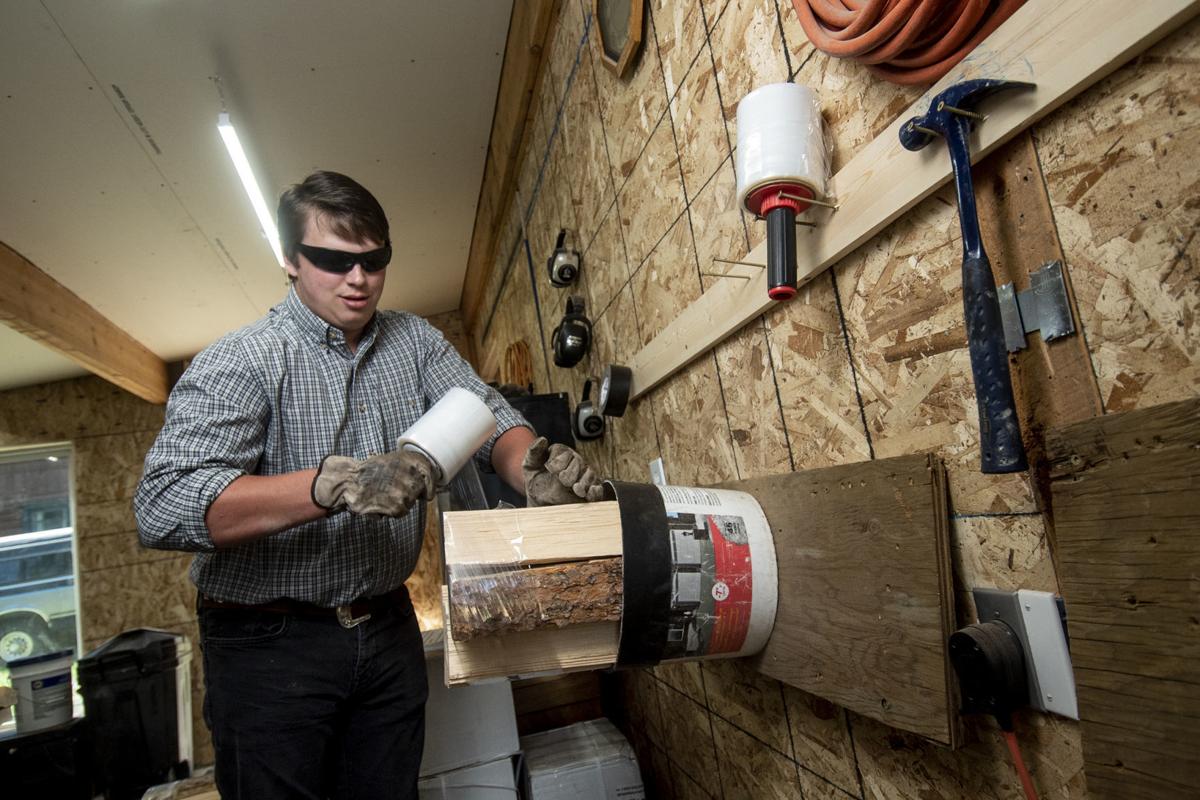 Chris Mosser, 20, wraps a bundle of firewood with cellophane after splitting the log in the workshop at his family's home in Stevensville on Thursday. Mosser, who was diagnosed with autism at the age of 3, has since started a business, Bubba's Bundles, which sells and distributes firewood to local businesses in the area. 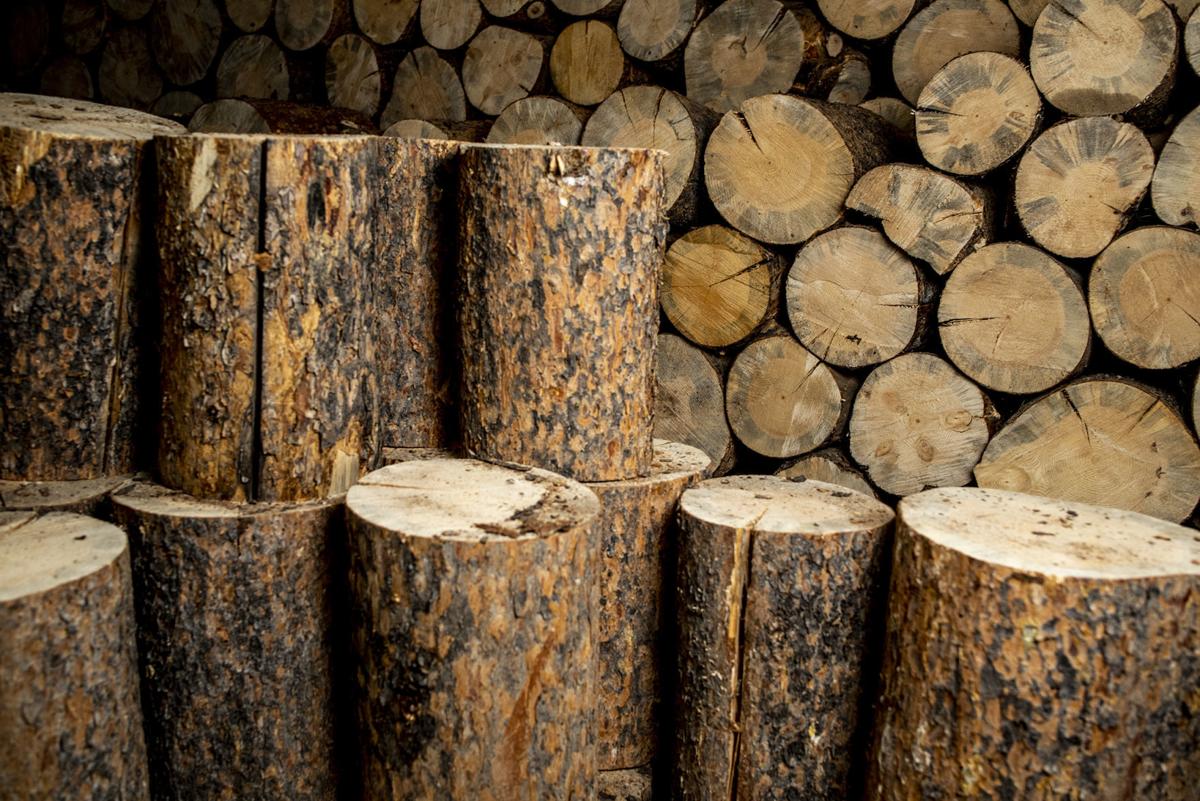 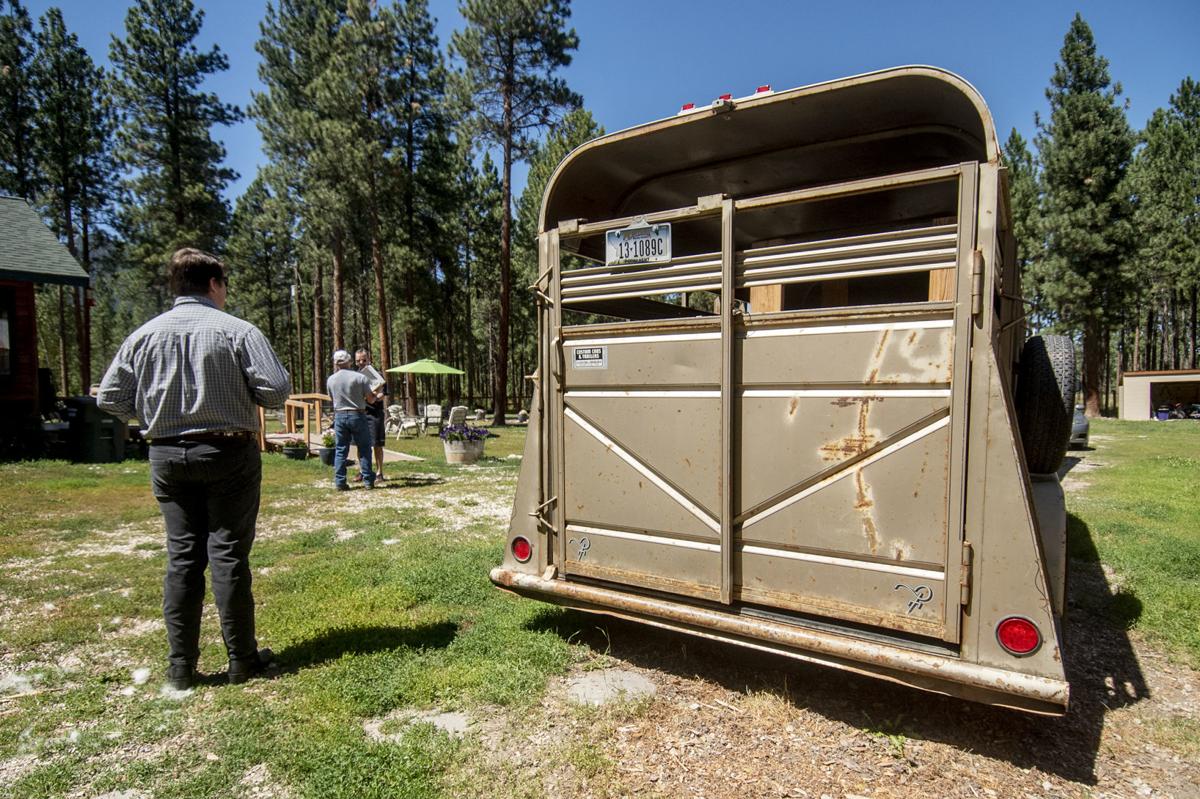 Chris Mosser watches as his father Gary, 60, speaks to a delivery driver at his home. Gary said he has learned much from being a father to Chris over the past 20 years.

Chris Mosser, 20, wraps a bundle of firewood with cellophane after splitting the log in the workshop at his family's home in Stevensville on Thursday. Mosser, who was diagnosed with autism at the age of 3, has since started a business, Bubba's Bundles, which sells and distributes firewood to local businesses in the area.

Chris Mosser watches as his father Gary, 60, speaks to a delivery driver at his home. Gary said he has learned much from being a father to Chris over the past 20 years.

STEVENSVILLE — Christopher “Bubba” Mosser doesn’t have a lot to say, but he’s got a lot to do. He’s in the kindling and firewood business, and business has spiked in the past few months.

He works from a shop that he helped build on his parents' property in Stevensville. With sliced tree stumps piled to the ceiling on one side and bundles of chopped wood stacked on the other, the scent of sawdust permeates his work space.

When asked for a demonstration, Chris wordlessly slipped on his gloves, fired up the electricity to his 34-ton 220v log splitter and grabbed a stump. Within minutes, he had a plastic-wrapped bundle waiting to be hauled off.

For the past two years, Chris has loaded, chopped, bundled and delivered firewood. During that time, the number and range of his customers has grown from two to 19, from Polson to Hamilton. He works alongside his father, Gary Mosser, a full-time contractor when he’s outside of Chris’ shop.

“We chop and bundle for hours, and every once in awhile, I’ll ask him if we’ve got enough,” Gary Mosser said.

He said he and his son can have 50 bundles ready in an hour. At more than 6 feet tall and 240 pounds, Chris towers over his father and lifts stumps like they're pillows. He’s got enough strength to spend part of the day chopping wood, another part helping his father on contracting jobs and, on one occasion, to lift up a Toyota Corolla stuck in a ditch near his home.

Bubba’s Bundles and Firestarter launched in 2017. A fourth-generation Montanan, Chris Mosser comes from a legacy of entrepreneurs. His great-great grandfather built the Tripp and Dragstedt Apartments in Butte, and he has relatives currently operating ranches and businesses in Anaconda.

At 20 years old, he’s carving out his own livelihood despite his autism diagnosis.

“He’s 20. I’m almost 60. My wife, Kim, and I are trying to have something set up for him so that when we’re not here, he's self-sustaining and not dependent on anyone, government or otherwise, to meet his needs,” his father said.

Just as with their three daughters, Gary and Kim Mosser agreed that their son needed independence, something to strive for and fulfillment in his work.

At the age of 3, Chris didn’t have anything to do, and didn’t want anything to do. According to his father, he sat in the yard and tossed dirt into the air. If his parents as much as touched his arm, it sent him into a tantrum.

“We had lost our son. And we didn’t know how to get him back,” said his father.

According to the federal Centers for Disease Control, a 2014 survey of 8-year-olds from 11 communities in the United States identified 1 in 59 children with autism spectrum disorder. There is no medical test to diagnosis autism, and there is no cure. Symptoms can include unresponsiveness, repeated actions or phrases and a lack of interest in people.

However, ASD can be detected as early as 18 months or younger, and early intervention can have an incredible impact on a child’s development.

Missoula’s Child Development Center provided that early intervention for Christopher Mosser when he was 3 years old and diagnosed him with autism.

The center started a relationship with Mosser and his family that has lasted 17 years. Para-educators took him from sitting in his backyard most days, to clapping his hands, to being able to read and write.

“Without them, we wouldn’t be talking,” Gary Mosser said.

At 12 years old, Chris Mosser had spent years bringing wood to his father to chop at the hydraulic splitter. When his father asked him if he’d like to run the splitter, he said, “Yes.”

“I realized in his mind, that at 12 years old, he was taking the head position. He was taking this is the important job from me. He had such a positive feeling about that I was never able to sit at the log splitter again,” his father said.

Around this same time, he picked up the nickname that his parents used for his business. When his mother gave him the name “Bubba,” his father didn’t think it suited the boy who was then just short of 5 feet and weighed 95 pounds. By the time he turned 16, he grew into his name.

At that same age, the Child Development Center told his parents to start planning for his transition to adulthood. It was “another kick in the gut” for his parents, since they hadn’t even thought of what he would do once he graduated from Stevensville High School.

Taking into account his affinity for mechanics and labor, along with coordination and financial support from Montana Vocational Rehabilitation and Blind Services, Bubba’s Bundles started supplying firewood to its first retail location at Stevensville Hardware Co.

Word of Chris’ business spread, and local support from Stevensville’s Super 1 Foods and Cenex raised Bubba’s Bundles’ profile and volume. In May 2019, two executives from Town Pump came from Butte to meet Mosser and his family before opening up several locations to his firewood.

Since the start of this business in July 2017, 10% of total sales have gone toward repaying those who came to the Mossers when they needed help. As of July 2019, Bubba’s Bundles has made over $7,100 in donations to the Child Development Center, World Vision, Feed the Children and Birthright in the Bitterroot. It also recently started making payments to Voc. Rehab for its $4,500 startup fund.

“He’s the first person in their 89-year history to reach back out to them and say, ‘Where do I send the checks to?’ They told us we don’t need to do that, but that wasn’t the point,” his father said.

“We get our values from our parents and we do everything we can to make sure that he understands what’s happening and why. To the best of our abilities, he’s on board with the decisions we’re making.”

“But he’s pretty easygoing,” he said.

Although his business gives back to the organizations that made Bubba’s Bundles possible, it still turns a profit and pays him a living wage. With the money from his business, Mosser has earned himself two dirt bikes, and he plans to upgrade to an ATV.