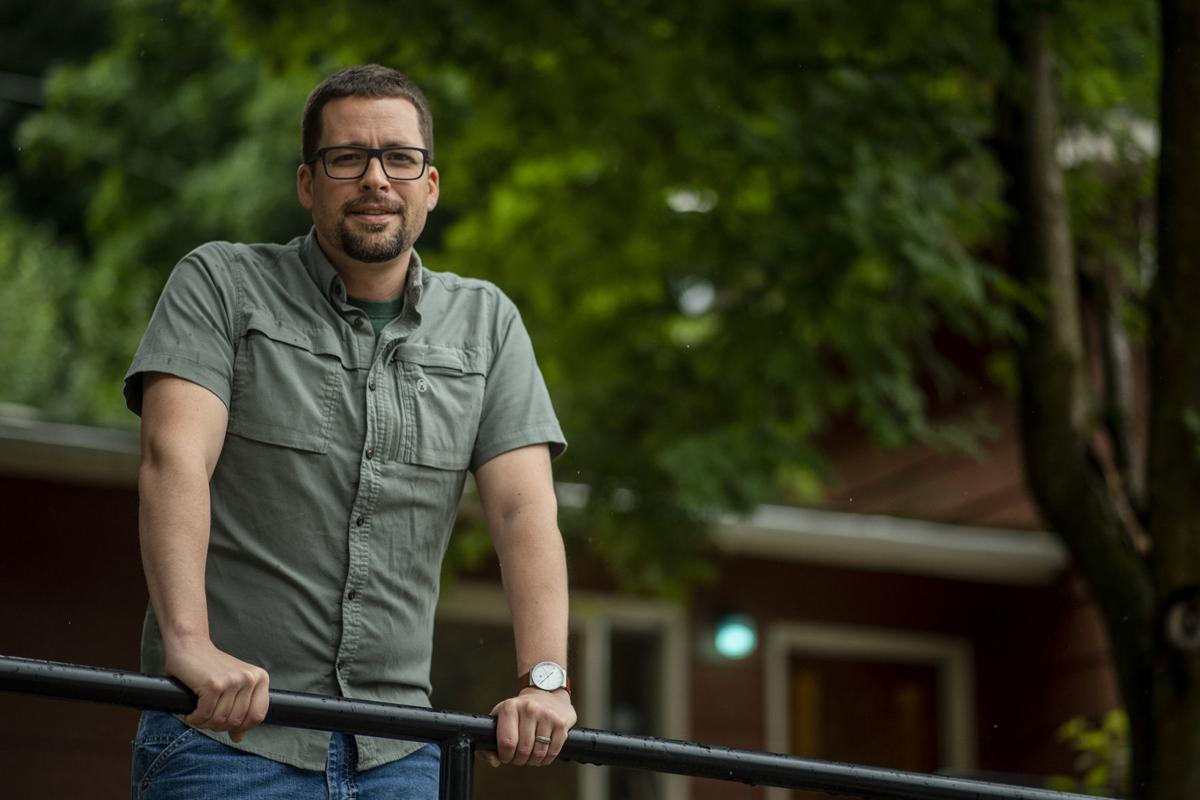 Shawn Grove, director of the Veterans Education and Transition Services Office, stands for a photograph outside the VETS office on the University of Montana campus in Missoula earlier this month. Grove was made director of VETS in December 2013. He said his biggest accomplishment within the office is a shift in culture among University of Montana students who utilize the VETS office resources. 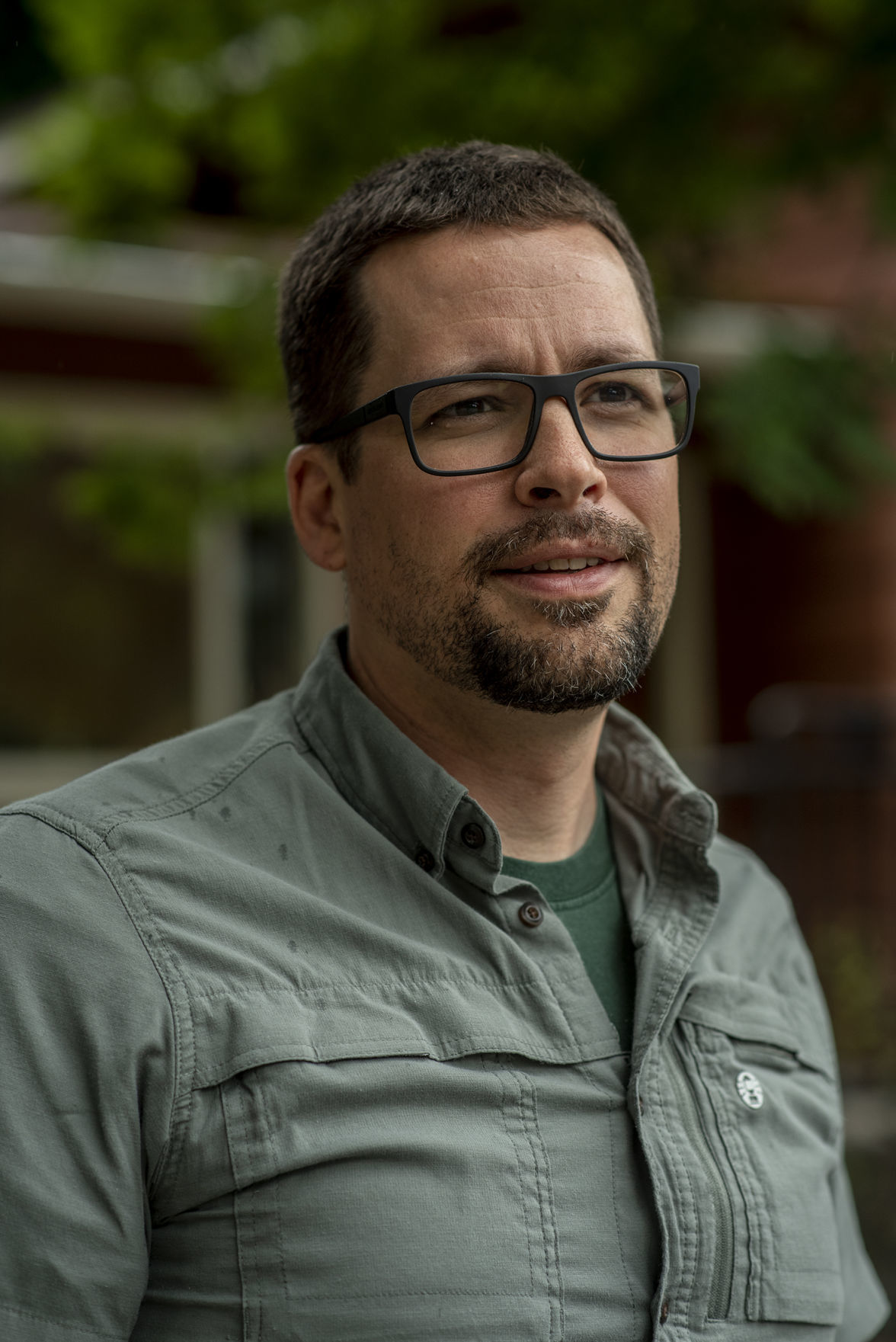 Grove managed to save the VETS program at the University of Montana from the brink of collapse. Since becoming director, the University has garnered national attention and has been awarded the Order of the Purple Heart.

Shawn Grove, director of the Veterans Education and Transition Services Office, stands for a photograph outside the VETS office on the University of Montana campus in Missoula earlier this month. Grove was made director of VETS in December 2013. He said his biggest accomplishment within the office is a shift in culture among University of Montana students who utilize the VETS office resources.

Grove managed to save the VETS program at the University of Montana from the brink of collapse. Since becoming director, the University has garnered national attention and has been awarded the Order of the Purple Heart.

Like a veteran’s transition from soldier to civilian, the director’s office at the University of Montana’s Veterans Education and Transition Services transitioned from a bathroom.

Shawn Grove, an Army veteran who has led the department since the end of 2013, had no problem making the bathroom his office and leaving the rest of the building to his staff and the hundreds of veterans enrolled at UM. Renovations to the three-story building on Beckwith make up only a small portion of the improvements for veteran students made under Grove’s leadership.

“Every year we try to come up with a new project, something to build on what we’ve accomplished so far,” he said.

Since he took over as director, the department that manages benefits for veterans has gone from near collapse to consistently earning the university national recognition for its service to students.

Grove left active duty in 2009 after serving for five years. While attending school at the University of Maryland, he entered a work-study program through Veterans Affairs to lend a hand to the school’s single administrator who managed the paperwork for those enrolled with military benefits.

“During my first semester, I was a little bit miffed by how inefficient it was,” he said. “It was a week before classes started, and I still hadn’t registered. The person in charge was a sweaty mess, just overwhelmed by everything that he had to sort through.”

A year later, the University of Maryland hired Grove as a full-time employee in the registrar’s office. About that same time, he decided that he’d found a new career path.

“I went back to school with the intention of working for one of the three-letter agencies, but I realized I didn’t want to do that. What I wanted to do was help veterans with their higher education,” Grove said.

After working as a VA auditor for the Maryland Higher Education Commission, Grove and his wife came to Missoula. In the years before Grove arrived, the university faced intense scrutiny from the VA.

“When I first interviewed for the job, the picture was not painted very pretty. The university was just learning about the Post 9/11 GI Bill and way out of compliance with the VA. It got to the point where the VA threatened to take away all veteran benefits from the university,” he said.

A year after he became director, the VA audited UM and found it to be 100% compliant with its standards. A year after that, UM became the only school in the Northwest to be recognized as a Purple Heart University for its service to veterans.

Along with the additions to the VETS office, which include a computer lab, printing station, rec room and patio, Grove has also coordinated with UM administrators to place staff on the university’s main campus and at Missoula College.

“They have all the same resources we do, but one thing that vets said they wanted was a space that was not necessarily off campus, but ‘away from the brass.’ This place is their escape, their refuge.” Grove said.

Grove said in the nearly six years that he’s been at the University of Montana, the greatest accomplishment on the part of his office and administrators has been what he called a “culture change.”

In response to climate surveys, the VETS center unlocked all of its doors, allowing veterans who may not be “social bugs” to access the computer lab without passing the front desk. Staff has also expanded from what used to be “all white dudes who were in the Marines” to men and women who served in the Marine Corps, Army, Navy and Air Force. Instructions for the staff reinforce this cultural change.

“I received feedback from female veterans who would come in and the first thing staff would ask is, ‘When did your dad get out?’ They’d turn in what they had to, but then never come back again. Now, no matter who walks through the door, the first question is: 'When did you separate from active duty?' If they’re a vet, then they get that recognition right off the bat.”

Grove said he also helps to mediate issues between students and teachers that can arise from the change of “training to fight to training to learn.”

“A university is unnatural environment, but is a unique opportunity for someone just exiting the military. You have a huge support network that you won’t find in the civilian world with counselors, faculty and your classmates,” he said.

Grove said veteran students, himself included, still have to contend with civilian responsibilities, like scheduling dental appointments, finding a place to get a haircut and even dressing themselves. Grove himself still wears a pair of tan combat boots.

"But that’s because I’m hiking the M later,” he said.

Under the M: Veterans invited to learn about Missoula College programs