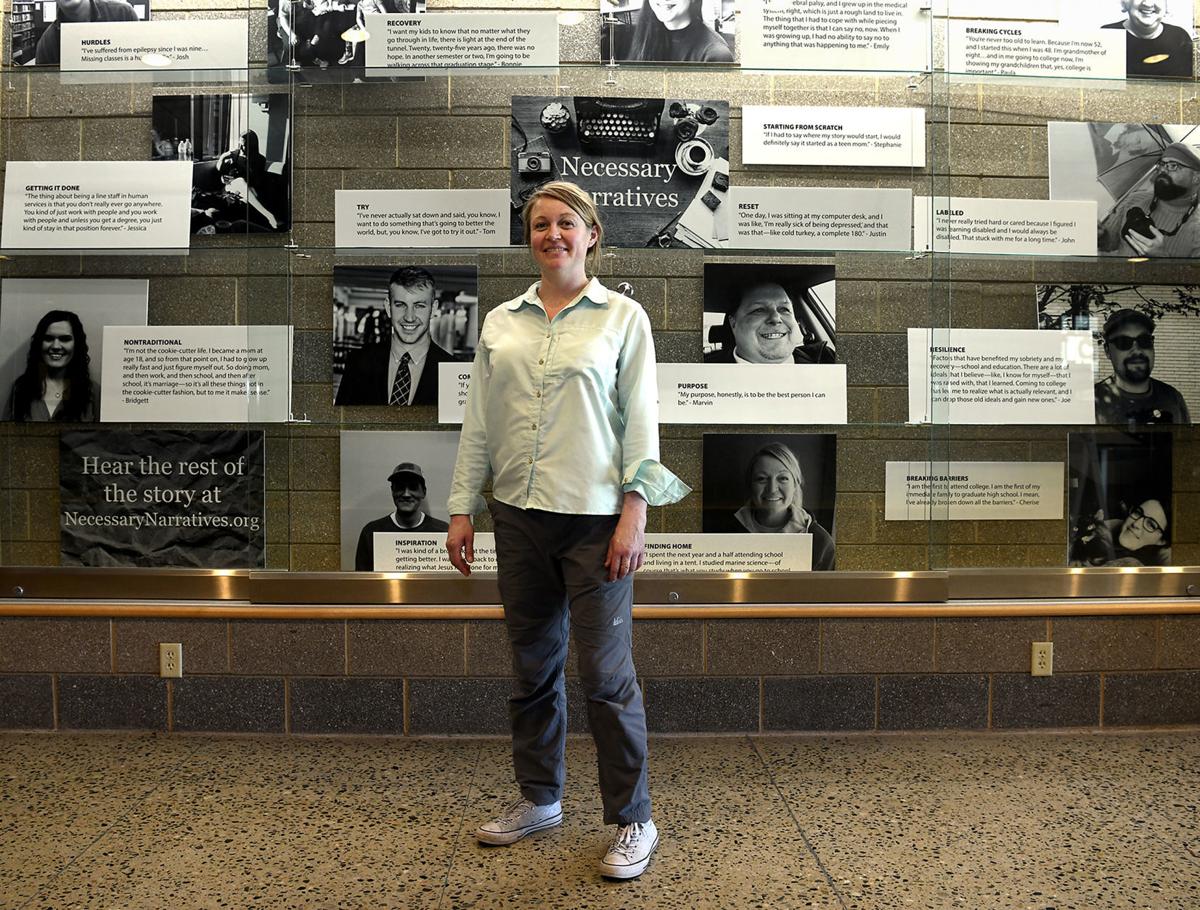 Monica Latham, a student at Helena College, stands in front of a display case of stories from the college's Necessary Narratives project last spring. Latham shared stories from her life for the project, which helps students, faculty, staff and administrators learn about students' backgrounds and challenges they've faced. 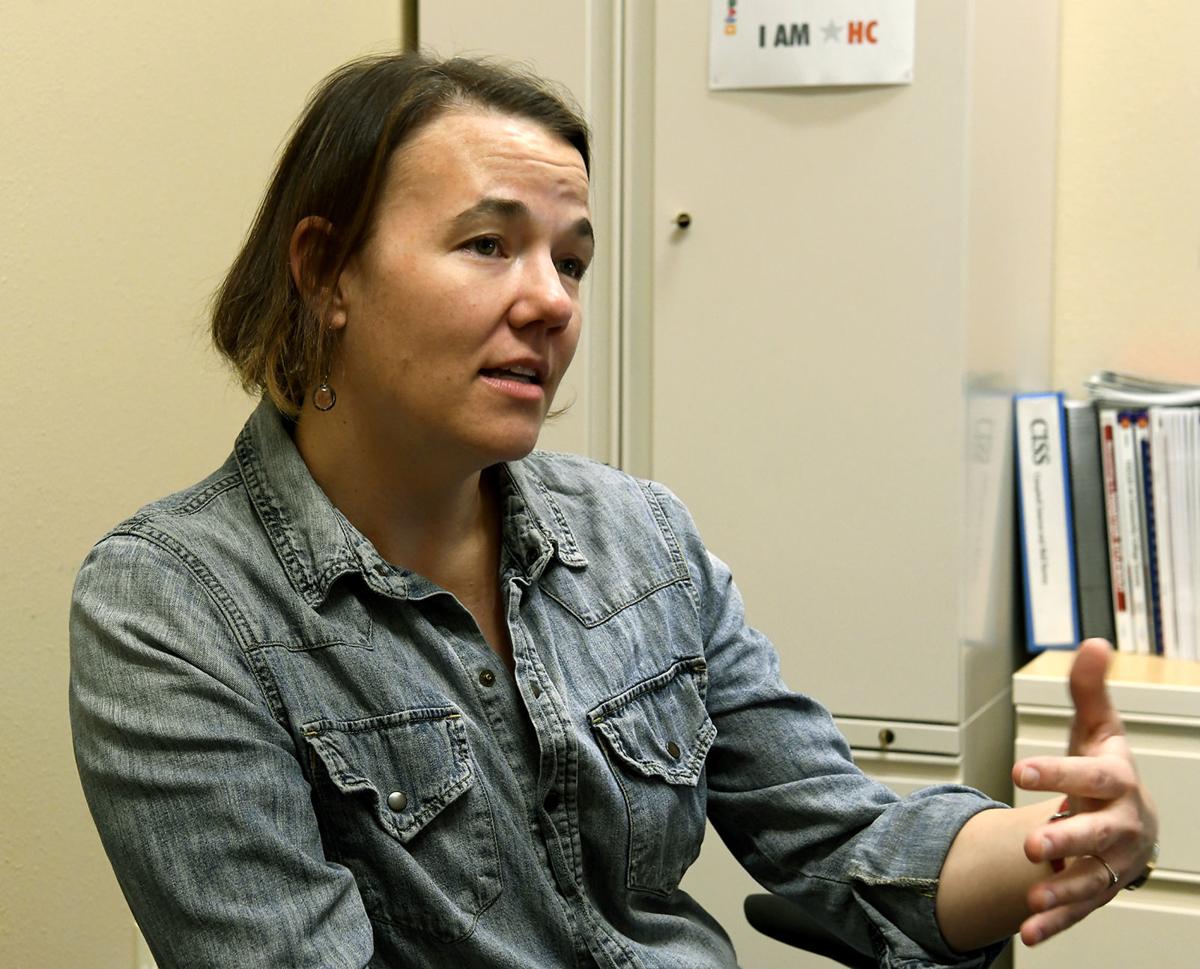 Virginia Reeves, a faculty member at Helena College, began the Necessary Narratives project as a way for students to share their stories of resilience and perseverance, and learn the craft of narrative along the way.

Monica Latham, a student at Helena College, stands in front of a display case of stories from the college's Necessary Narratives project last spring. Latham shared stories from her life for the project, which helps students, faculty, staff and administrators learn about students' backgrounds and challenges they've faced.

Virginia Reeves, a faculty member at Helena College, began the Necessary Narratives project as a way for students to share their stories of resilience and perseverance, and learn the craft of narrative along the way.

Virginia Reeves was sitting on a deck in Helena drinking wine and eating cheese with a friend when she heard gunshots.

She and her friend could see people involved in the shooting a hill away. Only later would Reeves, a faculty member at Helena College, learn the story of the man who survived five bullets and watched his friend die roughly a decade ago.

“We had no idea what was happening. We read about it in the paper the next day. (But) from a hill over, I was there the day Joe was shot.”

Joseph Wohlers later enrolled in Helena College, and his story is part of a project Reeves started called Necessary Narratives. In an audio clip from spring 2018, Wolhers talked about the shooting, recovery, addiction to painkillers, and his eventual return to school.

“The factors that have benefited my sobriety and my recovery? School and education,” Wohlers said in the recording.

Across campuses and beyond Montana, faculty, staff and administrators talk about the importance of learning students’ stories, but the concept is often nebulous. At Helena College, Reeves started helping students share their stories in a concrete way.

The idea came out of a lunch she had with the director of TRIO Student Support Services, Ann Wilcockson. They talked about the TRIO population and the lives the students had lived of resilience and perseverance.

“A lot of times, they are stories that aren’t told, and it’s rare that we are celebrating those stories,” Reeves said.

Last semester, Helena College dedicated a display case to the portraits from the Necessary Narratives project.

Monica Latham, who worked at the TRIO office last semester, was among the students who shared her story through Necessary Narratives. She talked about eating rattlesnake, living in a tent while studying in Hawaii, being a ski bum and a vagabond, and eventually returning to Helena.

“I never thought I would be back in my hometown and would complete my degree in my hometown,” Latham said in her recording. “I love being back. I love being in the outdoors. I love hiking, skiing, being around family, and just enjoying the easy of life in Montana."

Students are eligible for TRIO if they come from families with lower incomes and are the first generation in their family to go to college or have a disability.

Reeves, a faculty member in writing and communication, decided to help the students share their stories and in doing so, learn the craft of narrative. An author herself, the process was more difficult than she’d imagined, but the outcome was likely more powerful.

For the last three semesters, Reeves has posted audio clips and portraits from students on necessarynarratives.org. Stephanie Hunthausen, a TRIO retention specialist, was in the room the day students first listened to each other’s stories.

“A lot of tears were flowing,” Hunthausen said. She said students commented on having sat next to a peer in class and having no idea who the person really was, and she herself realized something important about the project in that moment.

“We’re doing something really good here,” Hunthausen said. “And it was exciting and very moving for the students and for myself.”

Reeves said faculty and staff are learning about the students, and students have told her they’ve been inspired to see the way their classmates have come out of hardships. They feel that in the telling, they’re helped through their own difficulties with addiction, abuse, poverty, “fill in the blank,” Reeves said.

“I’ve had so many students who feel that in sharing, it’s part of their recovery, too."