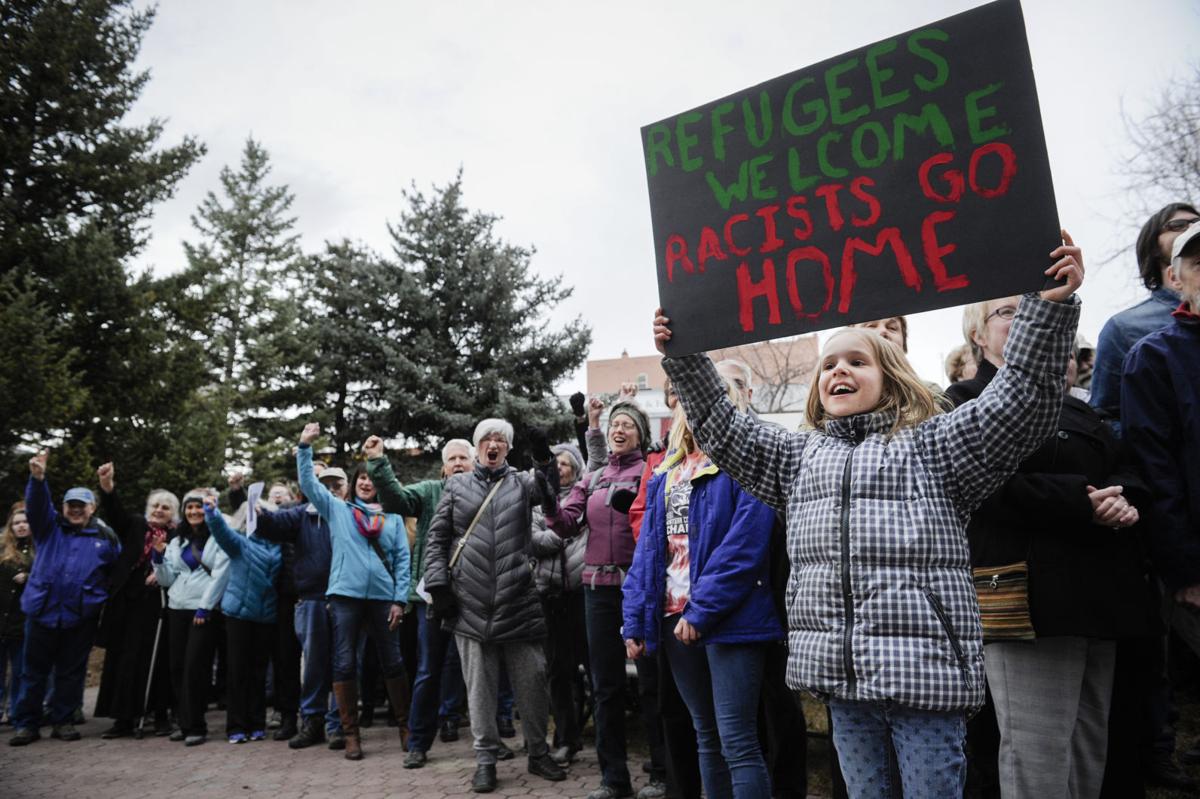 yells ‘stand together’ during Tuesday evening’s Stand Against Hate rally at Constitution Park in Helena. 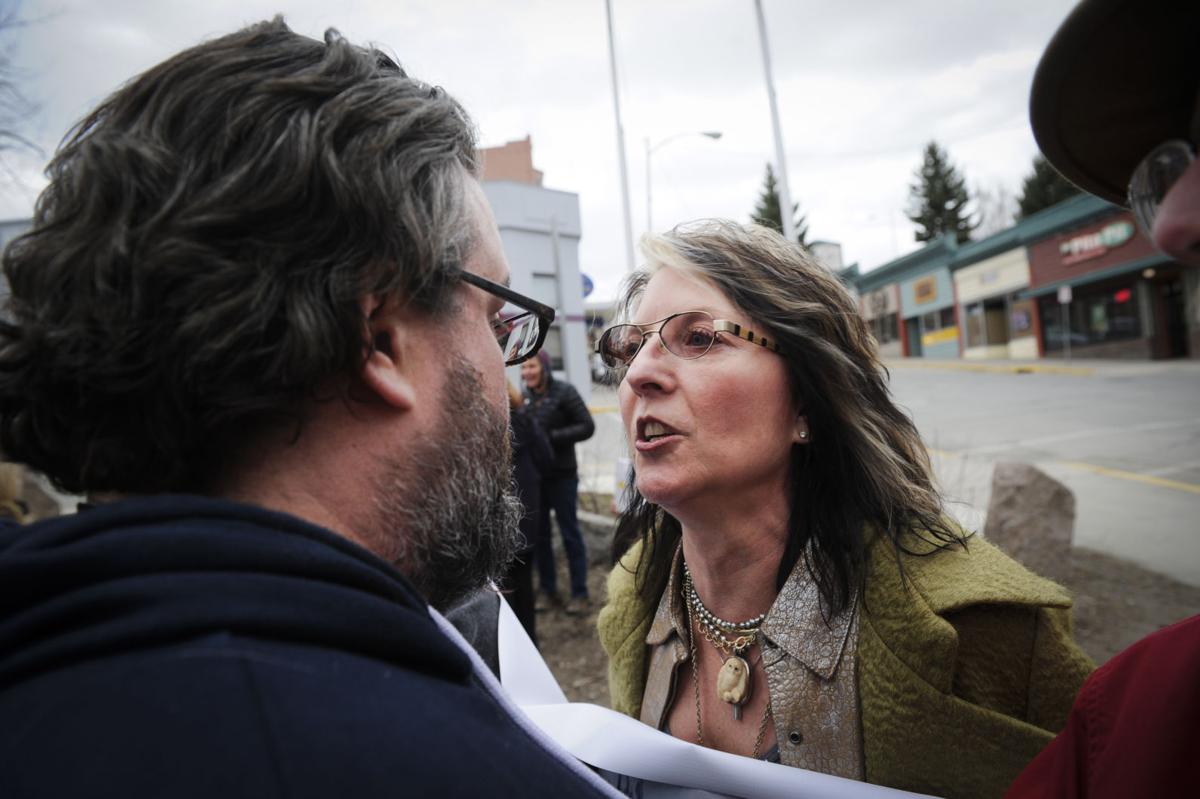 exchange words Tuesday evening before the Stand Against Hate rally at Constitution Park in Helena. 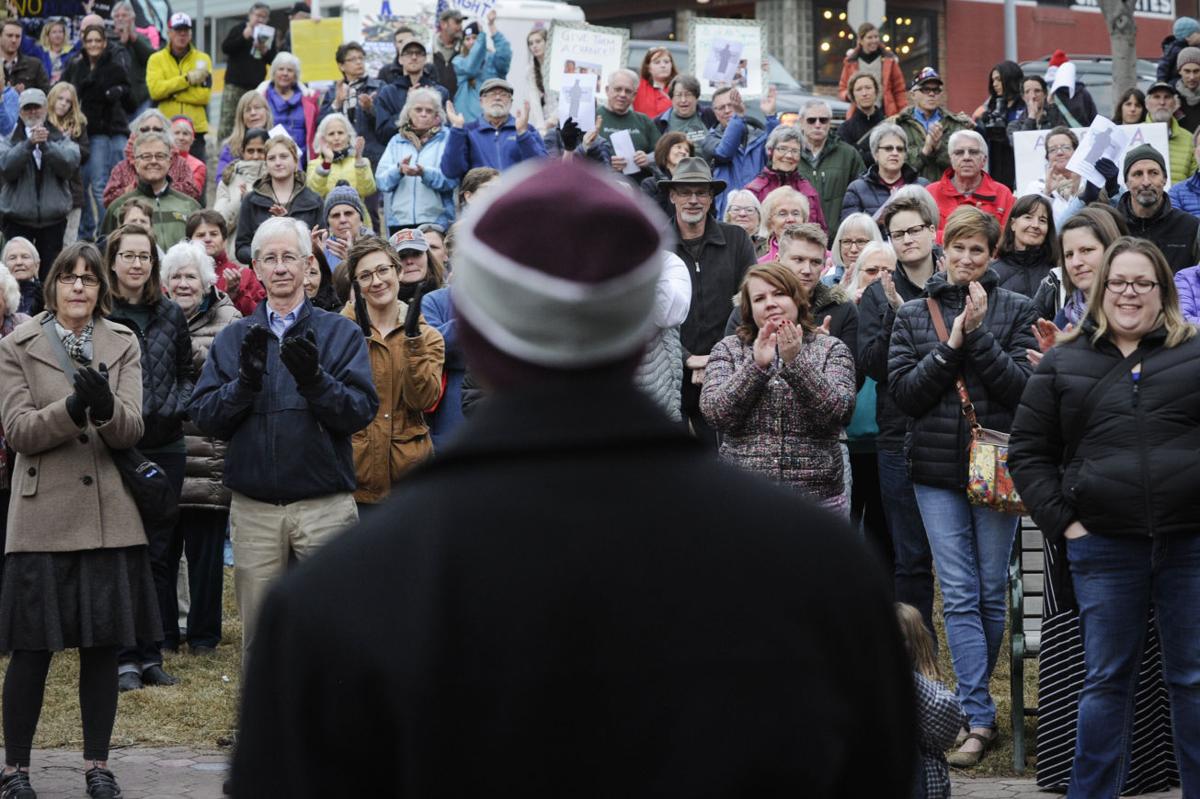 The crowd applauds Helena resident and Liberian refugee Wilmot Collins Tuesday evening as he tells a story about racist graffiti left on his house and the compassionate response of his neighbors at the Stand Against Hate rally at Constitution Park in Helena.

yells ‘stand together’ during Tuesday evening’s Stand Against Hate rally at Constitution Park in Helena.

exchange words Tuesday evening before the Stand Against Hate rally at Constitution Park in Helena.

The crowd applauds Helena resident and Liberian refugee Wilmot Collins Tuesday evening as he tells a story about racist graffiti left on his house and the compassionate response of his neighbors at the Stand Against Hate rally at Constitution Park in Helena.

The constitution was a hot topic Tuesday night at Helena’s Constitution Park, where hundreds rallied in support of Montana’s acceptance of refugees from war-torn Syria.

More than one speaker and dozens of rally attendees managed a reference to the country’s founding principles in the course of the nearly one-hour rally, one of five co-organized by the Montana Human Rights Network and simultaneously staged in cities around the state.

All seemed to agree America’s founders would have liked an oft-repeated line from the Emma Lazarus poem 'The New Colossus' that appears on the pedestal of the Statue of Liberty: “Give me your tired, your poor, your huddled masses yearning to breathe free.”

“Our great nation was built on refugees and immigrants,” refugee advocate Valerie Hellermann told a receptive crowd of around 300 supporters. “The average American is a fifth generation immigrant. Look at the richness of America from the assimilation of those many cultures.

“Some people have expressed fear over who gets into this country. … But keep in mind, refugees are fleeing terrorism, not propagating it.”

Hellermann’s speech came little more than a week after anti-refugee protesters descended on Montana’s Capitol building to decry the expected arrival of up to 10,000 Syrian refugees in the U.S. this year.

That event, the third such rally staged around Montana in recent weeks, also featured plenty of criticism aimed at Gov. Steve Bullock, who in November ignored calls from 55 Republican state lawmakers seeking to “block or resist the placement of Syrian refugees in our great state at this time."

The longtime state lawmaker, part of an eclectic lineup of rally speakers that also included a pastor and a Liberian refugee, wrapped up her brief remarks with a call-and-response chant inviting the crowd to “Stand together!”

Minutes later, that’s exactly what they did, posing for a group photo also taken at similar rallies in Bozeman, Missoula, Kalispell and Billings.

The rally closed in less than half the time anti-refugee protesters took up at the Capitol late last month, but attracted nearly twice as many attendees.

Signs welcoming refugees and inviting racists to “go home” greeted a half-dozen or so counter-protesters who picketed the rally around the park’s edges.

Some of those protesters, like Helena hair stylist Gina Satterfield, said rally attendees simply failed to grasp the danger posed by adherents to Islam, a religion she called “more political than religious.”

Feet away, Jan Larsen, who first immigrated from the United Kingdom in 1974, had just wrapped up a brief verbal clash with one of Satterfield’s cohorts.

“Would I not be let in (to the U.S.) today if I was a different color, or wearing a headdress?” Larsen wondered. “It’s just scary to see what’s going on.”

“They’re no different than anybody else,” he said of the refugees. “They’re the same. They’re people.”

Nearly a hundred protesters, and a handful of counter-protesters, took to the steps of the Capitol, Monday morning decrying the resettlement o…

An anti-refugee rally is scheduled for 11 a.m. Monday on the steps of the Montana State Capitol.

A group of Montana legislators is calling on Gov. Steve Bullock to block all Syrian refugees…

KALISPELL -- The Flathead County commissioners last week joined their counterparts from Ravalli County, going on record as opposing the resett…