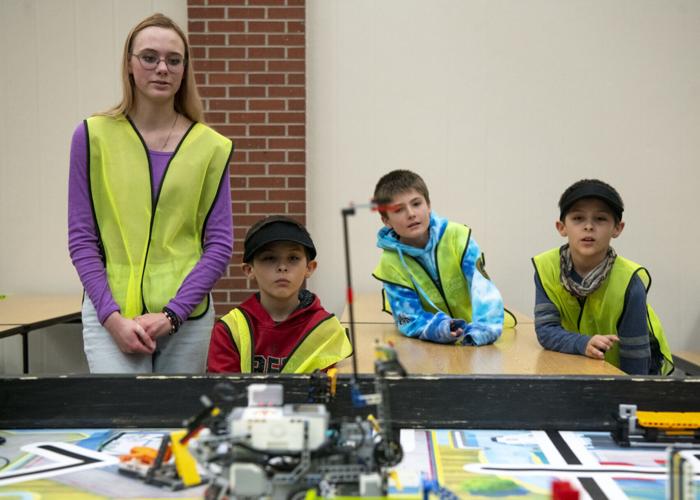 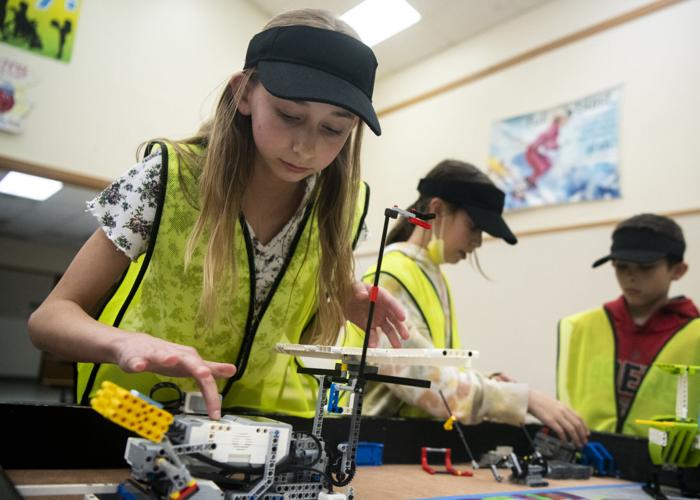 Emery Maxwell, a member of Hellgate Elementary’s Mechanical Maniacs robotics team, enters settings into the team’s robot during a practice on Wednesday afternoon.

In a cafeteria at Hellgate Elementary School, nine students cheered while watching their robot steadily hum across their lunch table, tracing black lines leading it to and from missions.

"We put a lot of work into it and a lot of hours and it just feels really rewarding to have it be paid off now,” said Adalyn Maxwell, Mechanical Maniacs team captain and an eighth-grader at Hellgate Elementary.  “We were all expecting to do well after all the work we had put in, but we were pretty excited to know that we had won the state championship.”

There are 100 students competing on 10 teams at Hellgate Elementary.

The Mechanical Maniacs are fundraising on GoFundMe to get themselves to Houston for the competition on April 20-23.

The team is composed of fourth- through eighth-grade students. Capp said the wide range of ages was largely determined by COVID with contact tracing in mind as some of the teammates are also siblings.

Normally, her teams have varying levels of experience and are closer in age.

“When I built the team I was like, this could either be really great or it could work out really terribly,” Capp said. “But obviously, it’s been really awesome.”

There were times during the season that it was challenging to strike a balance of energy and focus across all the teammates, Maxwell said.

“There’s the fourth-graders who, you know, they have such crazy bursts of energy and it’s a little difficult to rope them in, but you know they have some of the most creative ideas because anything that comes to their mind is a crazy, new, fun thing to add to the team,” Maxwell said.

“But then it’s also been helpful to have the other eighth-graders and seventh-graders and sixth-graders to work with because they’re more reliable — they’re people I can really count on to get jobs done,” she continued. “They’re kind of what brings us together.”

Robotics teams compete in robot game missions and make presentations to judges about their robot design and research project.

Each year, FIRST selects a unique theme to base the competition around. This year is “cargo connect.”

“Everything you see on that board and their project has to deal with shipment and problems with getting cargo and all that jazz, so the robot they build has to be able to drive around the board and complete various missions,” Capp said.

Teams have 2 minutes and 30 seconds to score as many points as possible during the robot game. There are 16 missions the teams can complete for points on the 8-by-4-foot foot board this year.

Each team designs their robot with different attachments to complete missions to knock down bridges, move trucks and packages.

“You have to have a lot of perseverance because … it’s a lot of trial and error — the program they’ve created might work one time, but then they try and go do it again and it doesn’t work,” Capp said. “I think the kids love working through challenges and oh my gosh it’s so much fun when they finally get that one program they’ve been working on for weeks to finally work consistently.”

But scoring points during the game isn’t the only way teams can win. Another equally important portion is to complete a research project to find an innovative solution to a problem related to shipping and receiving.

The Mechanical Maniacs’ project is called PicklCat, a delivery service combining the use of trucks, drones and subscription lock-boxes for more efficient and secure package delivery.

“One thing that FIRST really makes clear to students is working together as a team,” Capp said. "We have things called core values that we have to follow and the biggest one is gracious professionalism."

When the team is in front of the judge they perform a team-building challenge and receive scores based on teamwork.

“So not only are they gaining these science and STEM skills, but just learning how to be good team players," Capp said. "The biggest thing is they’re not worried about who wins, but who had fun.”

Teamwork has ultimately been one of the Mechanical Maniacs' greatest strengths, Capp said. Maxwell noted that gracious professionalism has come easily to their team.

“It was a lot of work and a lot of teamwork,” Maxwell said. "We had to be really considerate of each other. We had to find out each other's weaknesses and strengths and kind of work with each other."

On Tuesday, nearly 60 students cycled between 17 coaches for 20-minute individual sessions to get tips on grammar, structure, audience and everything in between.

No new deaths due to COVID-related illness have been reported since late February.

13 candidates file for MCPS school board election, levies to be considered

The school election will be conducted through mail-in ballots that must be received by the Missoula County Election Office on election day, Tuesday, May 3.

Elementary trustees present at the meeting unanimously approved running a $294,791 levy, which would have an approximate annual tax increase of $2.78 on properties with an assessed value of $100,000.

One in every four water faucets in Missoula County Public Schools buildings has been turned off after test results indicated the water they produced contained high levels of lead.

Thirteen candidates filed to run for six positions across four districts this year for the MCPS board.

The students helped raise the fish as part of the new Trout in the Classroom program.

These are the Most Popular U.S. Cities to Move To

These are the Most Popular U.S. Cities to Move To

Emery Maxwell, a member of Hellgate Elementary’s Mechanical Maniacs robotics team, enters settings into the team’s robot during a practice on Wednesday afternoon.