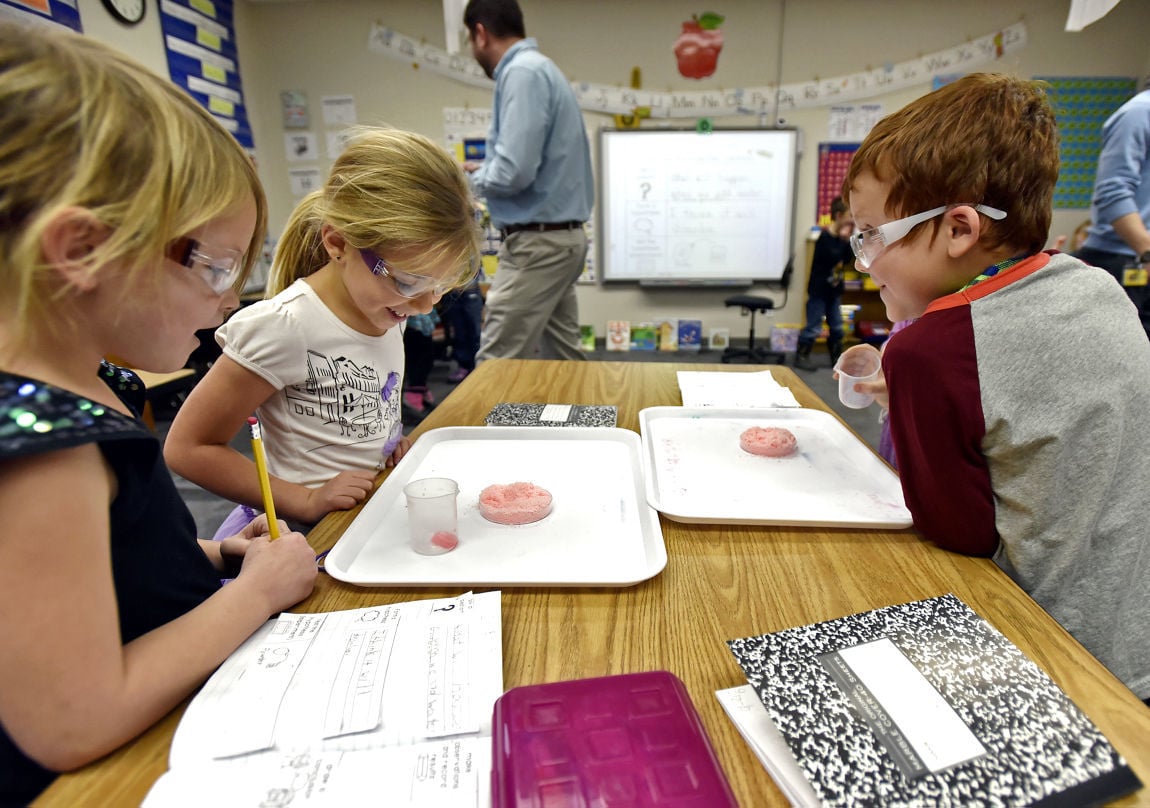 First-graders Lyla Wanberg, Madison Alfson and Kameryn Richards, from left, watch their science demonstration with Insta-Snow, which expands with water to look like snow, in Shane Byers’ class at Hellgate Elementary School on Tuesday. A grant helped fund some of the class’ demonstrations and brought in Ben Reeves, a researcher at Rivertop Renewables, to present science experiments to the students during the school year. 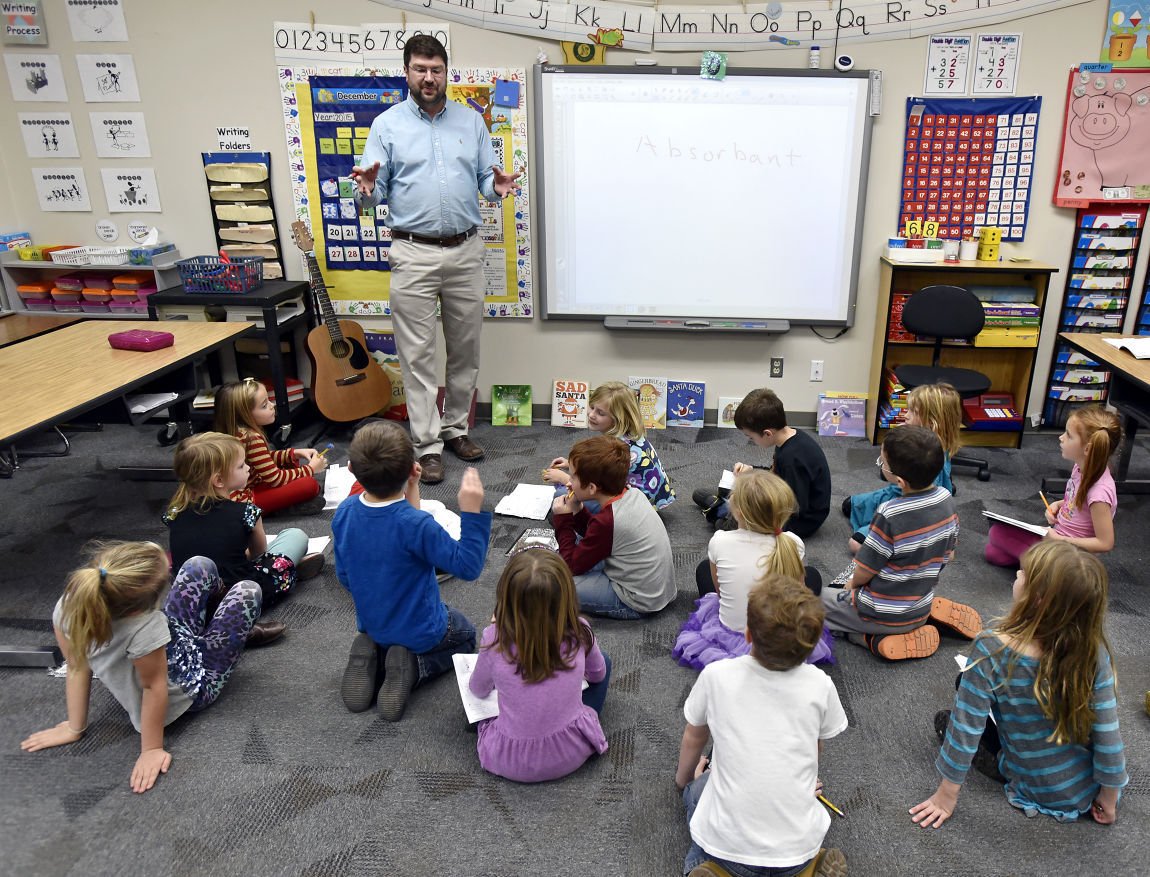 Ben Reeves talks about the behavior of water and snow with first-graders at Hellgate Elementary on Tuesday.

The ground might be dry outside, but there was plenty of snow to be found inside Hellgate Elementary School on Tuesday.

As part of a yearlong project to promote science education, Ben Reeves, a researcher with Missoula-based Rivertop Renewables, will visit Shane Byers’ first-grade class every month to conduct experiments with his students.

Tuesday’s topic was snow – and the students got to make artificial flakes in their classroom.

Reeves said he applied for a grant from an American Chemical Society program called Science Coaches last summer that is meant to bring working professionals into the classroom to show students some of the basics of the field.

“It allows chemistry professionals to share their expertise and enthusiasm for science in the schools,” Reeves said.

As part of the grant application, Reeves had to partner with a classroom he would work with if the grant was approved. His search was a simple one – his 6-year-old son Silas is one of Byers’ students.

At the start of the year, they received the $500 grant to pay for materials for classroom experiments, including every scientist's most basic safety tool – a pair of goggles – for each student.

Each of Reeves’ visits includes a brief discussion about a scientific principle that is usually related to topics the class is covering, as well as an experiment or demonstration. Byers said some of Reeves other visits so far this year have focused on weather and the water cycle.

Reeves’ visit Tuesday began with a discussion about why snow is important.

After many of the kids raised their hands and answered with their favorite winter activities, Reeves said that to him the biggest role snow plays comes in the spring and summer when it provides a source of water as the weather becomes warmer and drier.

"The mountains get to store all of our water, and that's the reason I like snow,” he told the students.

Because they couldn’t get their hands on actual snow, the demonstration for the day involved making artificial snow.

The students broke into groups and each was given a Petri dish containing a white powder. Reeves said it was a highly absorbent material called Insta-Snow, similar in composition to what is used in diapers to soak up liquid, that is commonly used by the film industry to create artificial flakes.

The students then poured water into the dish of powder, first writing a hypothesis in their "science journals" about what they thought would happen.

At one table in the classroom, Brady Lanz, Jack Sullivan and Charlotte Ward worked together.

For a brief second after Lanz poured some water – which was colored with food dye to make it easier to see – his face showed disappointment as the powder remained in the bottom of the dish. Within moments though, the powder expanded into a damp, fluffy material that closely resembled real snow.

Ward she always loves the days when “Dr. Ben” comes to visit her class. Her favorite experiment so far was when he talked about condensing air and how weather works – he made a cloud in a bottle in front of the classroom.

Reeves concluded the lesson by talking with the students about various objects that, while solid, are composed mainly of water.

Reeves is volunteering his time to visit the classroom and said Rivertop Renewables is very supportive of the effort. One of his main goals is to make sure the kids have fun while they learn.

“They are natural scientists,” Reeves said. “There’s a deep sense of wonder they bring to the process.”

Emma Kimerly's commute from home to Missoula's Head Start office is exactly 99 steps. At the end of this week, she will walk to work as she do…

Hellgate Elementary School is running out of classroom space and will seek the public’s input on plans to expand.

Every day, Hellgate Elementary School’s youngest students file to the cafeteria and rush through the lunch line as staff scramble to make sure…

First-graders Lyla Wanberg, Madison Alfson and Kameryn Richards, from left, watch their science demonstration with Insta-Snow, which expands with water to look like snow, in Shane Byers’ class at Hellgate Elementary School on Tuesday. A grant helped fund some of the class’ demonstrations and brought in Ben Reeves, a researcher at Rivertop Renewables, to present science experiments to the students during the school year.

Ben Reeves talks about the behavior of water and snow with first-graders at Hellgate Elementary on Tuesday.