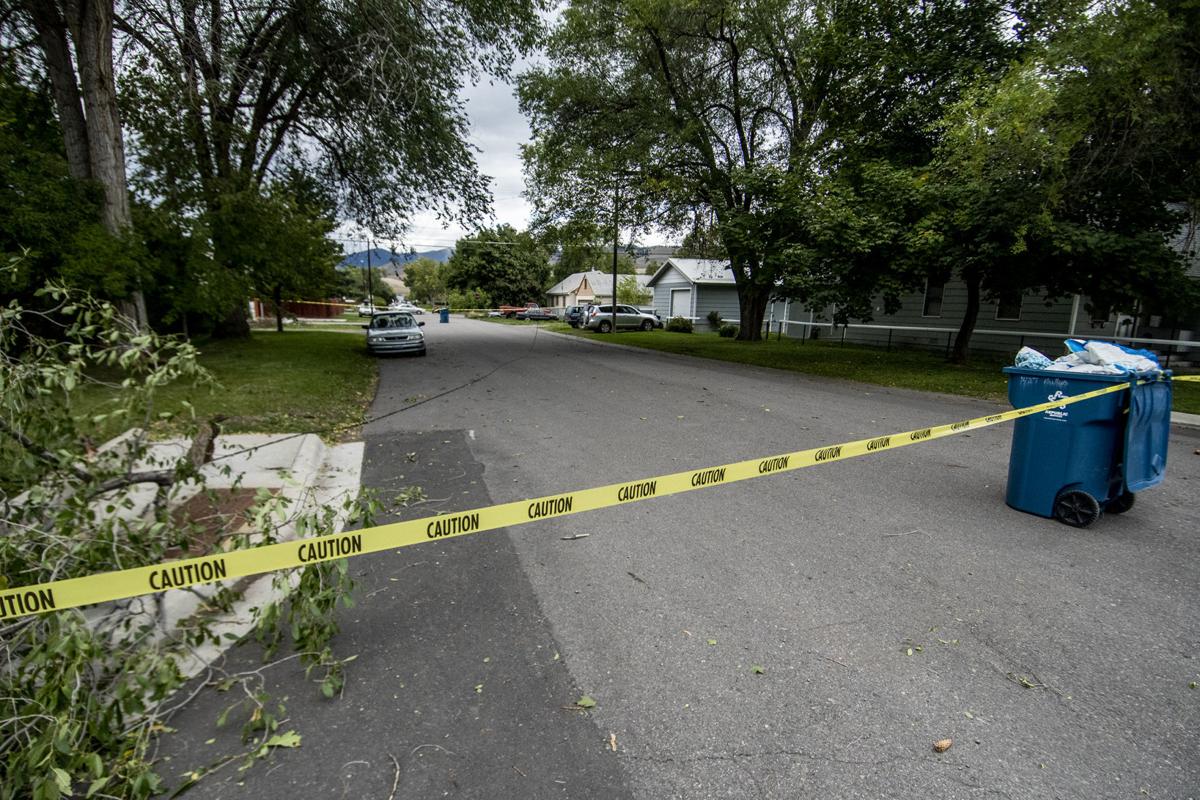 Caution tape surrounds Bulwer Street after a tree branch brought down a power line in the middle of the road due to high winds on Saturday. Early season storms can bring additional risks because heavy, wet snow and high winds can cause trees to fail, dropping heavy limbs and branches that are still covered in leaves. 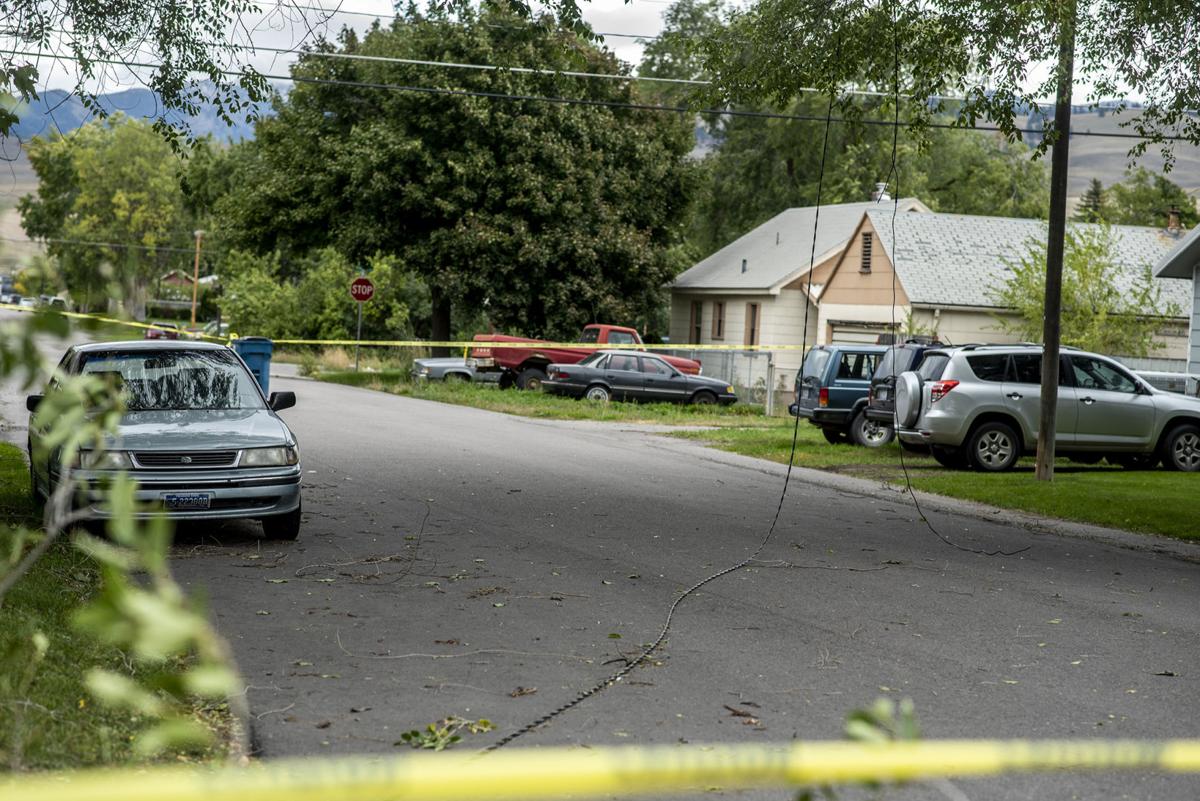 A downed power line sits on Bulwer Street after a tree branch came into contact with the line on Saturday. 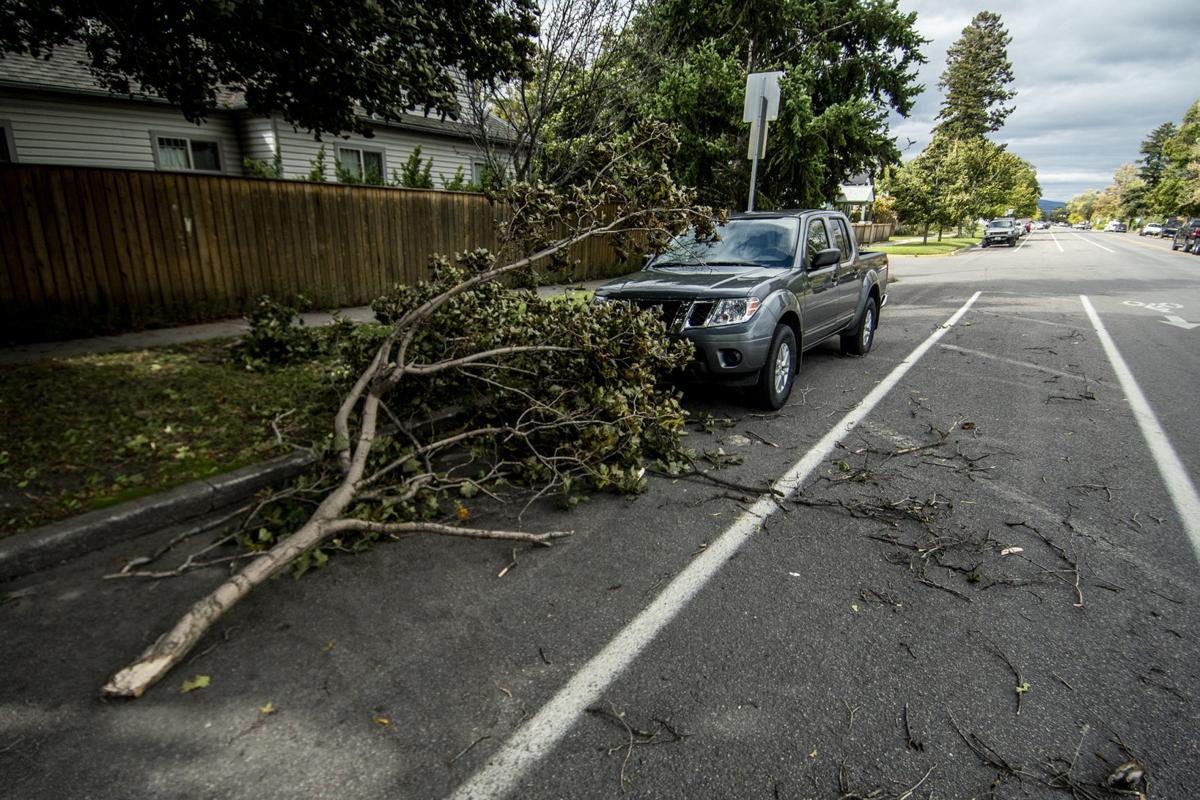 Snow wasn't falling in Missoula yet Saturday afternoon, but that didn't mean it was out of the picture.

With winds up to 40 mph Saturday afternoon in Missoula that were expected to continue into the evening, the National Weather Service issued a winter storm watch for Missoula in effect until 6 p.m. Sunday. To the north, the NWS reported 51 mph wind gusts at the top of Whitefish Mountain shortly before 1 p.m. Saturday.

Elsewhere in western Montana, the Associated Press reported that strong winds and heavy snow have led to power outages and temporary road closures as a wintry storm threatens to drop several feet of snow in some areas of the northern Rocky Mountains.

People posted photos on social media of heavy, drifting snow in and around Glacier National Park.

Snow is piling up in Glacier National Park in Montana! These are some of the images Saturday afternoon courtesy @GlacierNPS #MTwx pic.twitter.com/dI2Pqm9wHg

Closer to home, "we are expecting still some snow by tomorrow morning in Missoula and in the Bitterroot Valley to a lesser extent,” Leeann Allegretto, a meteorologist for the National Weather Service in Missoula said Saturday afternoon.

“About 1 to 2 inches. It should only stick on grass, but we are expecting a drop in temperatures as well so there is that uncertainty as to whether or not it could really impact travel here in Missoula, especially Sunday morning.”

Allegretto said the winter storm watch may be upgraded for Missoula and the National Weather Service will post updates for Missoula on its website and social media.

Early season storms can bring additional risks because heavy, wet snow and high winds can cause trees to fail, dropping heavy limbs and branches that are still covered in leaves.

“When a tree has a full canopy, the weight of snow and rain combined with high winds can cause more frequent and unpredictable limb failure,” Missoula Urban Forestry Specialist Marie Anderson said in a press release the city's Parks and Recreation Department sent Friday evening.

The Urban Forestry and the City Street Maintenance divisions of Missoula Parks and Recreation developed an emergency plan to keep streets and sidewalks clear.

Crews in Missoula are preparing for the worst, but hoping for the best, said Gerald Auch, who is coordinating the efforts.

Auch said several trees had fallen on power lines in the Rattlesnake area as of Saturday afternoon, with reports of more downed lines on trees and vehicles starting to come in.

"We have some of our crews in conjunction with the power company and streets department trying to mitigate that right now," Auch said. "It's not terribly bad right now but it's certainly keeping us busy."

Auch said it is important for residents to stay aware of their surroundings and keep an eye out for hazards such as older limbs or downed power lines.

"If we get a heavier snow, that accompanied with the foliage that's on the trees makes for a good combination to bring some of the older limbs down so we don't want people under those heavy snow load trees," Auch said.

Auch said residents should stay in their vehicle if a power line happens to come down on their car.

Residents should report downed power lines to NorthWestern Energy at 888-467-2669 or 911. Residents should also call 911 to report tree debris blocking streets, sidewalks and alleys, or to report property damage resulting from a city tree failure, according to the press release.

“As we expand outward, the winter storm warnings that are in effect basically all around Missoula and across western Montana into north central Idaho, there is snow expected, but we’re also seeing it combined with up to 50 to 60 mph winds,” Allegretto said.

As of Saturday morning, NWS had reports of up to 30 large trees down on the east side of Flathead Lake, which took down several power lines and left people without power and, in some cases, phone service.

A winter storm warning was in effect from 6 p.m. Saturday to 6 p.m. Sunday, for areas including I-90 East Missoula to Bearmouth, Highway 200 Bonner to Greenough, Highway 83 Seeley Lake to Condon, Butte, Georgetown Lake, Highway 12 Garrison to Elliston, Homestake Pass, and MacDonald Pass, according to the National Weather Service.

"It started snowing in Butte, it’s a mess on MacDonald pass and things are just going to get worse throughout the night," Allegretto said.

The National Weather Service in Great Falls reported nearly a foot of snow had fallen near Marias Pass just south of Glacier National Park by midmorning Saturday. Meteorologists say snowfall rates in the Glacier park and the Blackfeet Reservation areas could reach up to an inch an hour during the height of the storm.

Lou Bruno, an East Glacier resident who lives near Highway 2, said he estimates that the area received over 20 inches of snow.

"It's snowing like crazy," he said. "We’re not even going to try for a while, it’s just too much trouble to get out of here."

Bruno said his main concern at the moment is protecting his trees which are loaded down with the wet snow.

"It came down yesterday, started as rain and then froze and all the trees still had their leaves so it makes them very heavy and in danger of breaking in half," he said.

Bruno said even with the forecasts, he was surprised with the amount of snow they received because the weather had been nice and he was hiking in Two Medicine less than 24 hours earlier.

"It was a bit chilly but it wasn’t doing anything except drizzling a bit and that was around 5 or 6 p.m.," he said.

"Before this, we hadn’t had a single frost. All the flowers in pots were still alive so it came on us really, really suddenly even though they were forecasting it, it was hard to believe."

The storm system was also bringing strong winds and snow to the mountains of northern Washington and northern Idaho.

NYC nurse tells her story to get people vaccinated

NYC nurse tells her story to get people vaccinated

Various organizations were gearing up or changing plans Thursday in advance of what could be a historic winter storm this weekend.

The half-inch of snow covering trees, lawns and cars in Missoula on Sunday marked the first measurable snow here in September since 1983.

The early onset of winter is expected to keep Missoula colder than normal for at least the next week.

Even though last weekend’s wintry weather put the kibosh on many popular summer outdoor activities, there’s still time to take advantage of wa…

Town along the Rocky Mountain Front were mostly back to normal Tuesday, but the area’s ranches were still working to extract themselves from the snowdrifts.

Caution tape surrounds Bulwer Street after a tree branch brought down a power line in the middle of the road due to high winds on Saturday. Early season storms can bring additional risks because heavy, wet snow and high winds can cause trees to fail, dropping heavy limbs and branches that are still covered in leaves.

A downed power line sits on Bulwer Street after a tree branch came into contact with the line on Saturday.