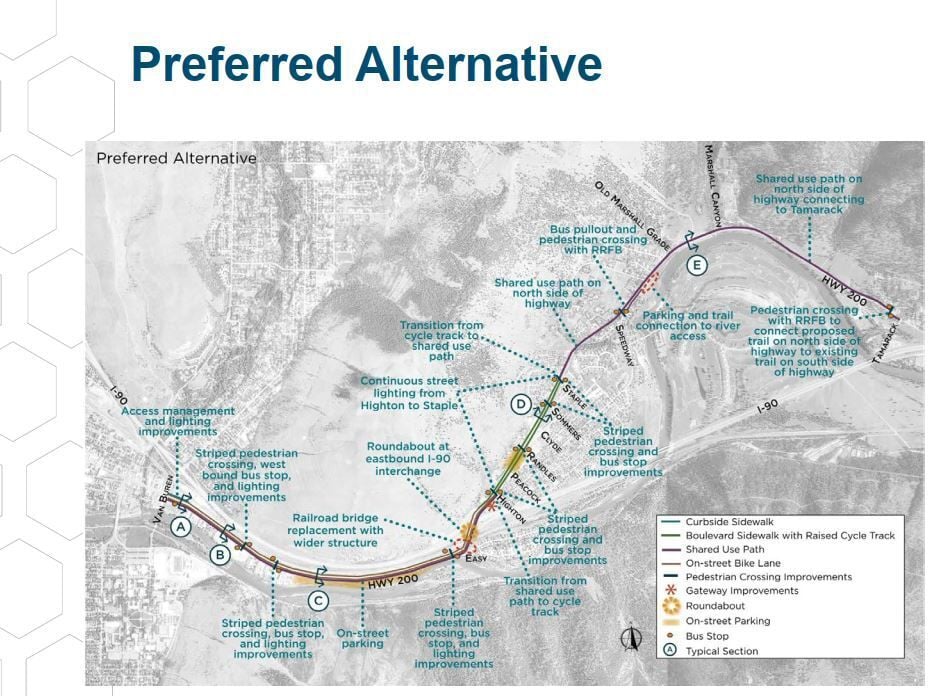 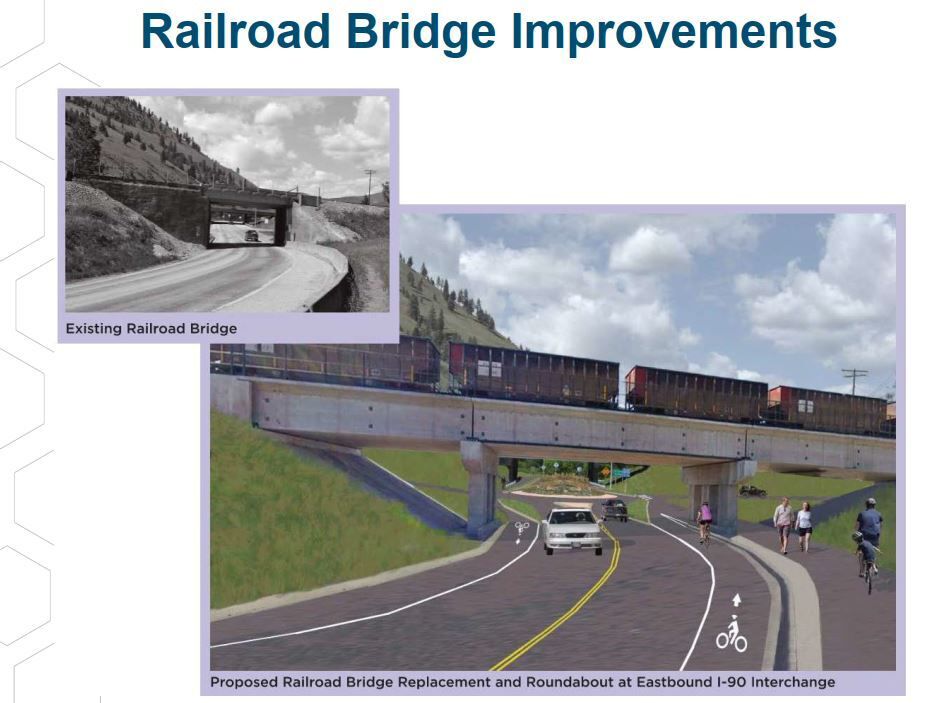 A new railroad bridge over I-90 is proposed as part of a project to reshape Highway 200 from Van Buren Street to Tamarack Road.

The project, called the East Missoula-Highway 200 Corridor Plan, was presented at a Public Works committee meeting last week. It calls for a reconstructed railroad bridge near the I-90 interchange, as well as increased parking near the Sha-Ron River Access Point, a popular recreation area in the warm months of the year.

Trails, potentially two roundabouts and major changes to the main stretch through East Missoula around Randles Street and Clyde Street are also in the plan, which at this stage is mostly conceptual.

The hope is that the improvements will be safer for both motorized and non-motorized vehicle traffic, as well as pedestrians. The infrastructure could also eventually benefit urban growth in the area.

"It's about both accessibility and safety," said Aaron Wilson, Missoula's infrastructure and mobility planning manager. "There's a whole host of issues associated with that particular section."

The plan is still conceptual, meaning there has not been preliminary engineering or surveying done. In a city document outlining the probable costs for the preferred way the project would be done, the price tag would come out to around $31 million.

With inflation, the cost will rise as years pass. For example, the project total by 2035 rises to nearly $50 million. Construction would likely take place in stages and much would depend on grants the city could potentially get from state and federal sources.

Costs will differ greatly depending on which plans are picked and the project is split up into three segments.

The East Broadway section, which runs from Van Buren to I-90, would include lighting improvements and large changes to the railroad bridge in the area. Roundabouts for both the east and westbound exits are included in the preferred project.

The proposed plan calls also for improvements alongside the road for cyclists and pedestrians. This directly relates to the reasoning for a new railroad bridge — it is a very tight squeeze at the bridge right now and lacks walking and biking amenities.

In order to accommodate a shared-use path, the space under the bridge would need to be expanded. During construction, a temporary bridge adjacent to the existing bridge would have to be constructed.

"That's sort of the most challenging pinch point in this corridor," Wilson said. "We're looking at a number of options."

One of the biggest parts of the plan would be a major reconstruction through East Missoula. Currently, the roads in East Missoula around Ole's Country Store are poorly marked and the driving surface is not defined in the way the City of Missoula would like it to be.

The area lacks curb, gutter and sidewalk and has paved sections of parking lots that directly flow into a road. Outside of being a safety hazard, this also causes issues with storm water drainage.

A boulevard and sidewalk are in the proposed plans, as well as a two-way left turn lane through most of East Missoula. Curb and gutter would also extend through that section of Highway 200.

Plans call for the existing skewed intersections to be more defined where they connect to the highway.

The final piece would be the shared-use path that would nearly go to Bonner and a parking lot near the Sha-Ron River Access point. Floaters frequent the area in the warm seasons and can clog up the road with vehicles.

"We're probably lucky that somebody hasn't been injured or killed in that section," Wilson said. "The primary goal there is to accommodate. We want to accommodate people's recreational activities, but we need to do it safely."

An 84-stall parking lot east of the Sha-Ron access point could potentially be added, as well as a bus stop. There was also discussion of another river access point that could be added near the parking lot for floaters and that the fishing access point would be used more for motorized watercraft than tubes.

There even was an idea to put an air pump nearby to help cut down on vehicle trips, as buses could then run to the area carrying floaters with deflated tubes.

No date exists for a potential start on the project. Funding and design work needs to be finished, which will likely take some time.

"It could be anywhere from the next two to five to 10 years or longer, depending on how successful we are identifying those sources to help get this project constructed," Wilson said.

Missoula Parks and Recreation invites residents to share their ideas to improve river access in downtown Missoula via a brief online public opinion survey through March 31.

Interviews for the citizen oversight committee for the Affordable Housing Trust Fund are pushing forward.

The City of Missoula annexed 20.21 acres of land north of the 44 Ranch and Flynn Ranch subdivision on Monday night, which will be called McNett Flats.

Feature photo: Bison on the Range

A bison wanders looking for spring green-up on the National Bison Range with the Mission Mountains in the background on Tuesday.

A Trump-era proposal which could disrupt funding to large communities in Montana has leaders of large cities around the state worried.

Mobile transactions could get a little less expensive for some merchants in town if a new payment system that debuted in Missoula on Friday finds its legs.

Missoula is set to preliminarily adopt an ordinance on Monday that would rezone a half-block in the Westside neighborhood, clearing the way for development on the property.

The search for the next Missoula County Health Officer is down to four people, including two who reside in Missoula.

The Missoula Parks and Recreation Department is looking for input on its new community center at McCormick Park.

The agency is looking to raise $85,000 this month for Meals on Wheels.

A push and a plan for a sustainable future of transportation in Missoula continues to roll along.

A Republican-backed group is claiming to have found issues within the 2020 Missoula County election, despite no evidence.

Rumble strip installation on highways in western Montana will begin this spring, the Montana Department of Transportation said in a Monday release.

Castle Rock Construction wanted to build 59 units on the 1.65 acre plot. The decision means they will only be able to build 44 units.

Hong Kong to euthanize at least 2,000 animals after 11 test positive for COVID-19

A new railroad bridge over I-90 is proposed as part of a project to reshape Highway 200 from Van Buren Street to Tamarack Road.