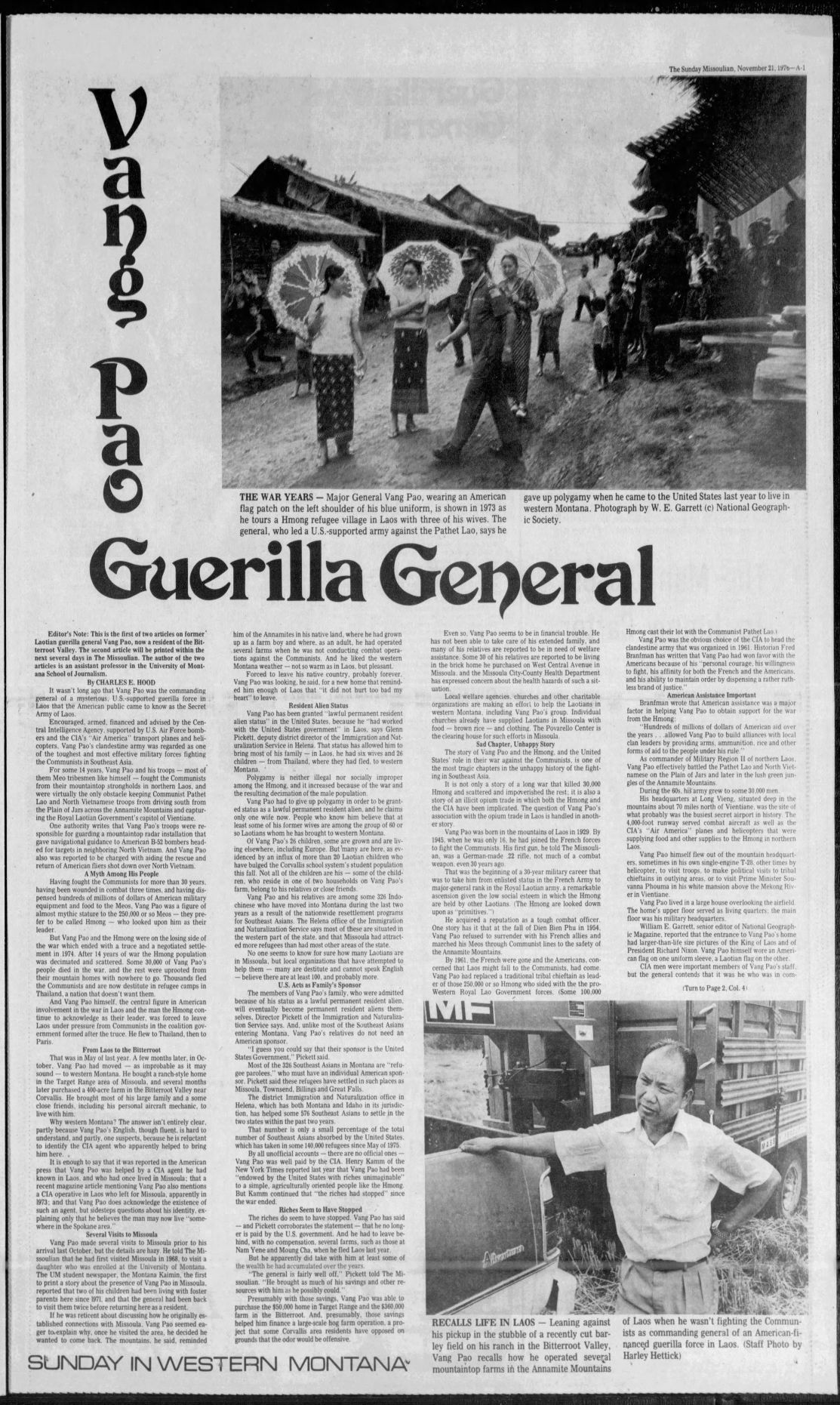 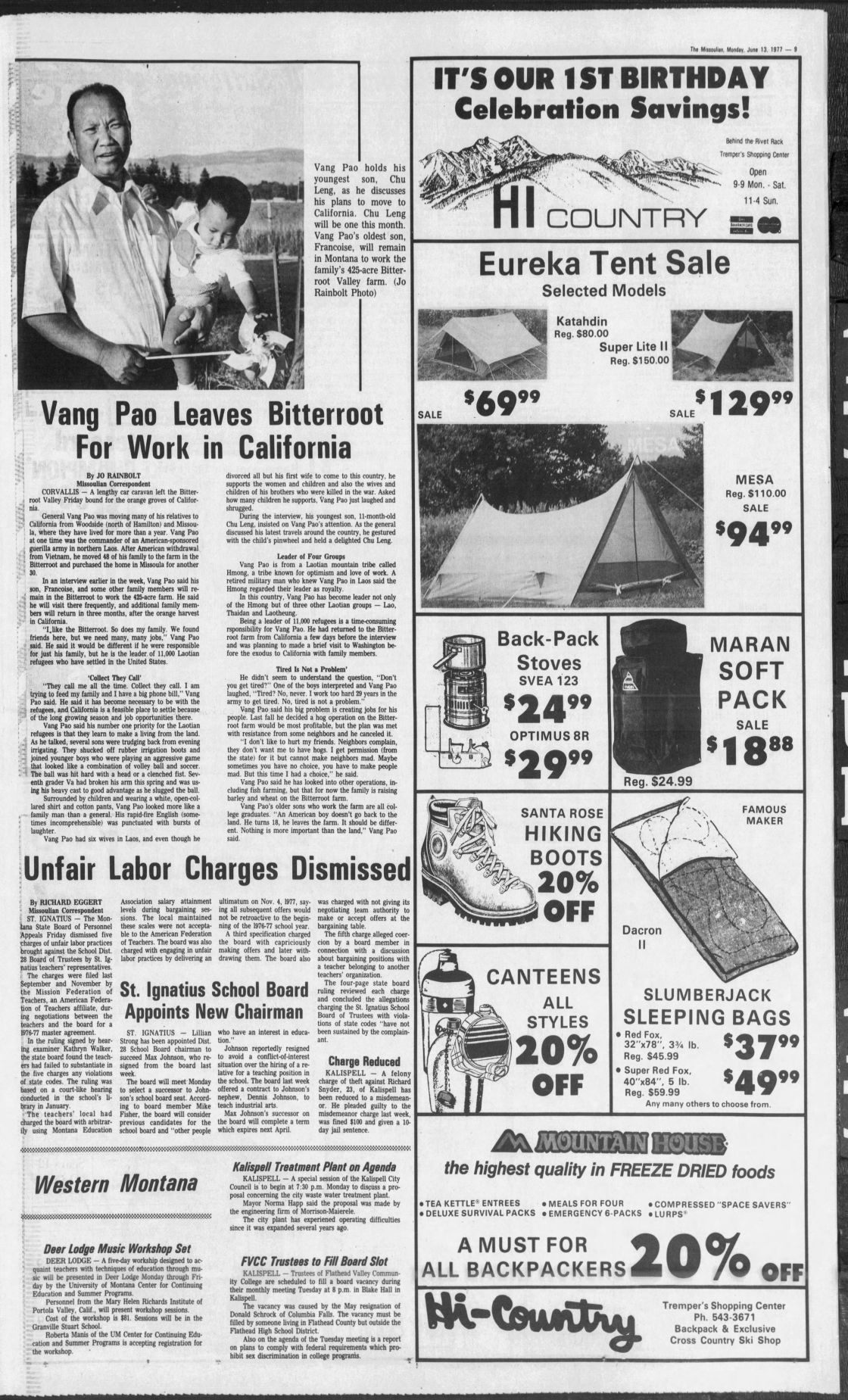 The word “Hmong” didn’t appear in the general consciousness of western Montana until late 1976, nearly a year after the first refugees from the wars in Southeast Asia began to arrive.

By then an estimated 100 Hmong lived in the Missoula-Ravalli County area, according to stories by Missoulian reporter Jane Byard in November of that year. The number grew to 600 by the end of the ‘70s as the highlands people from northern Laos settled into strange, safer lives in a world fraught with language, cultural and employment challenges. Most eventually left, but those who remained and the generations that followed wove their places into the fabric of Missoula.

Their successes, and those of subsequent government-sanctioned refugees from Belarus in the 1980s and '90s and the current three-year wave of mostly Congolese and Eritreans, are central to the local theme of this week’s national Welcoming Week. Soft Landing Missoula and partners are in the midst of a 10-day, nine-event “week” that began Friday to celebrate the contributions of refugees and immigrants to Montana.

Byard reported the Missoulian’s first stories on the local Hmong. Local health officials expressed concern over the lack of medical records and other information about the new refugees. In a story that ran on Saturday, Nov. 13, Dr. William Norman, part-time health department medical officer, said some of the refugees had “tropical parasitic intestinal diseases.”

Part of the problem was no governmental agency knew the identities and whereabouts of all the refugees. Byard also addressed a zoning issue raised by the 30 Hmong refugees living in a house at 3316 W. Central Ave., west of what in a few years would become Big Sky High School. The ranch-style house was apparently owned by Gen. Vang Pao, “former commander of a Central Intelligence Agency-supported guerrilla army in northern Laos,” who also owned a farm in the Bitterroot Valley at Woodside, west of Corvallis.

Vang Pao’s son, who went unnamed in the report, had told county sanitarian Cliff Fly in a letter that all 30 members were related by blood, marriage or adoption.

“An on-site inspection of the property indicates a well-kept, single-family residence,” Fly said. “As there are no zoning violations, I am closing my file on this matter.”

The Sunday Missoulian the next day (Nov. 21, 1976) shed more light on the mysterious Hmong migration. The first of two articles on Gen. Vang Pao by Charles Hood, an assistant professor at the University of Montana School of Journalism, described details of Vang Pao’s “Secret Army of Laos,” and its U.S.-supported 14-year battle against the Communist infiltration of Laos.

“Vang Pao was a figure of almost mythic stature to the 250,000 or so Meos — they prefer to be called Hmong — who looked upon him as their leader,” Hood wrote.

When Laos fell to the Communists in May 1975, Vang Pao was forced to leave Laos, first to Thailand, then to Paris, Hood reported. By October he had moved to Montana and bought the Target Range home. Several months later, he purchased the 425-acre farm in the Bitterroot.

“Why western Montana? The answer isn’t entirely clear," Hood wrote, "partly because Vang Pao’s English, though fluent, is hard to understand, and partly, one suspects, because he is reluctant to identify the CIA agent who apparently helped to bring him here.

“It is enough to say that it was reported in the American press that Vang Pao was helped by a CIA agent he had known in Laos, and who had once lived in Missoula; that a recent magazine article mentioning Vang Pao also mentions a CIA operative in Laos who left for Missoula, apparently in 1973; and that Vang Pao does acknowledge the existence of such an agent, but sidesteps questions about his identity ..."

Vang Pao was eager to explain why he’d settled here.

“Forced to leave his native country, probably forever, Vang Pao was looking, he said, for a new home that reminded him enough of Laos that ‘it did not hurt too bad my heart’ to leave,” Hood wrote.

Barely six months later, the general left Montana. Bitterroot correspondent Jo Rainbolt reported on June 13, 1977, that Vang Pao had moved many of his 78 relatives from Woodside and Missoula to the orange groves of California. His oldest son Francoise was staying to work the farm.

“I like the Bitterroot. So does my family,” he said. “We found friends here, but we need many, many jobs.”

Vang Pao lived in southern California until his death in 2011 at age 81.

Years after the general left Montana, the curtain was finally pulled back on the identity of the CIA agent who brought him here in the first place.

Jerry Daniels, a former Missoula smokejumper, died under mysterious circumstances in Bangkok in 1982 while working for the U.S. State Department. On Sept. 1, 1998, an article titled “Refugees in Missoula” appeared in a special Family section of the Missoulian. Jim Rolando, Refugee Services Coordinator in Missoula, described how Daniels and a colleague from the State Department convinced U.S. officials in 1975 that Vang Pao and the Hmong must be evacuated after Laos fell to the Communists.

“With hasty plans and little time, one group of about 200 Hmong ... came to Missoula with Jerry Daniels. They arrived in 1976,” Rolando said.

Not until 2008 did we learn through the Missoulian of how that came about. Daniels’ mother, Louise, who died in 1996 and to whom he was devoted, had worked for the International Rescue Committee in conjunction with the Lao Family Community in Missoula. She was on the receiving end when her son sent Hmong refugees this way — in essence playing the role that the IRC and Soft Landing Missoula fill today.

Missoula Rewound is a weekly presentation of Missoula and western Montana history from the archives of missoulian.newspapers.com.

The rise and fall of a Missoula kid

Most of those who've heard of Paul Maclean have his big brother to thank.

Hmong, Missoula came to grips with each other in 1st refugee resettlement

They called us “Hmongtana,” at least the Washington Post did.

Those may well be the remains of Jerry “Hog” Daniels that lie buried in the Missoula Cemetery. But it’ll take more than a postmortem report fr…

Missoula refugees are distressed by the Trump administration's cap of 18,000 refugee admittances this year, the lowest number since the federal program was established 40 years ago.

Rudolph the Red-Nosed Reindeer waited until he was 7 years old before he made his debut on the pages of the Missoulian. It's been smooth sledding ever since.