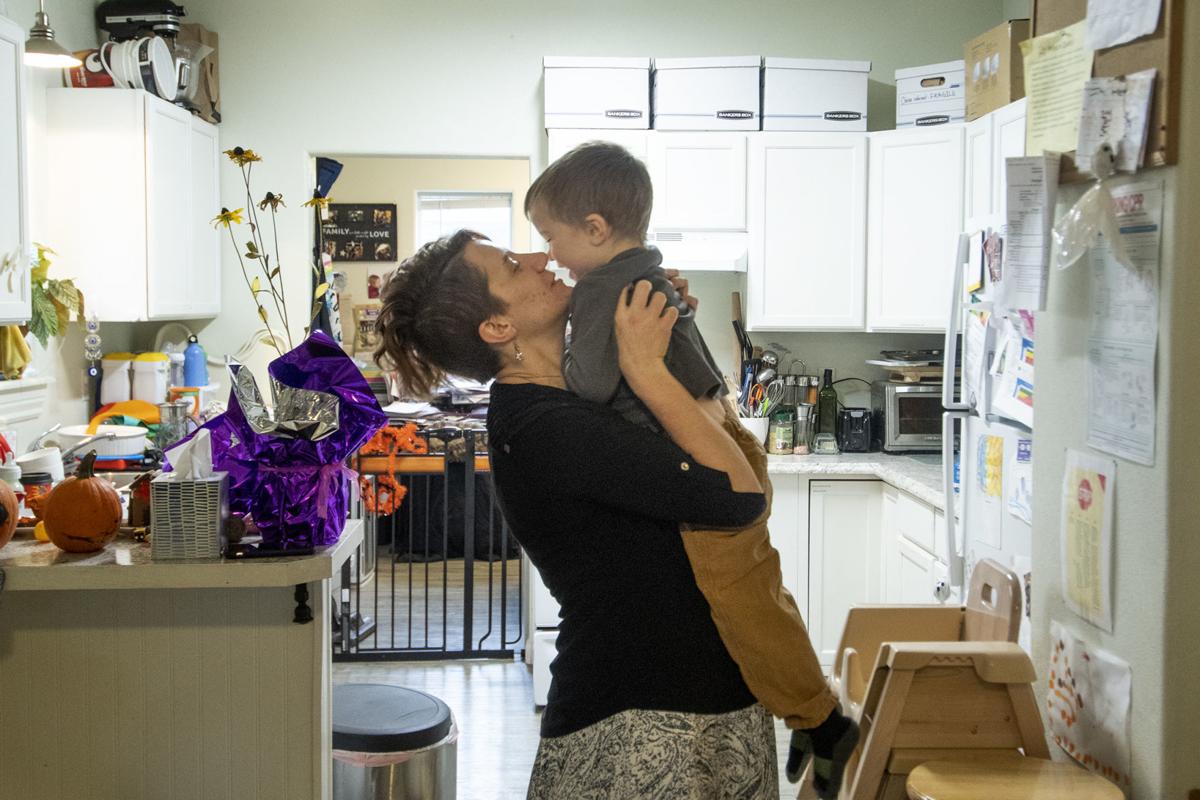 BriAnne Moline embraces her son Carl, 3, one of the many children she takes care of at the in-home Wild Wonders Early Learning Program in Missoula on Thursday. Moline moved the child care business into their home on Edith Street in June this year. 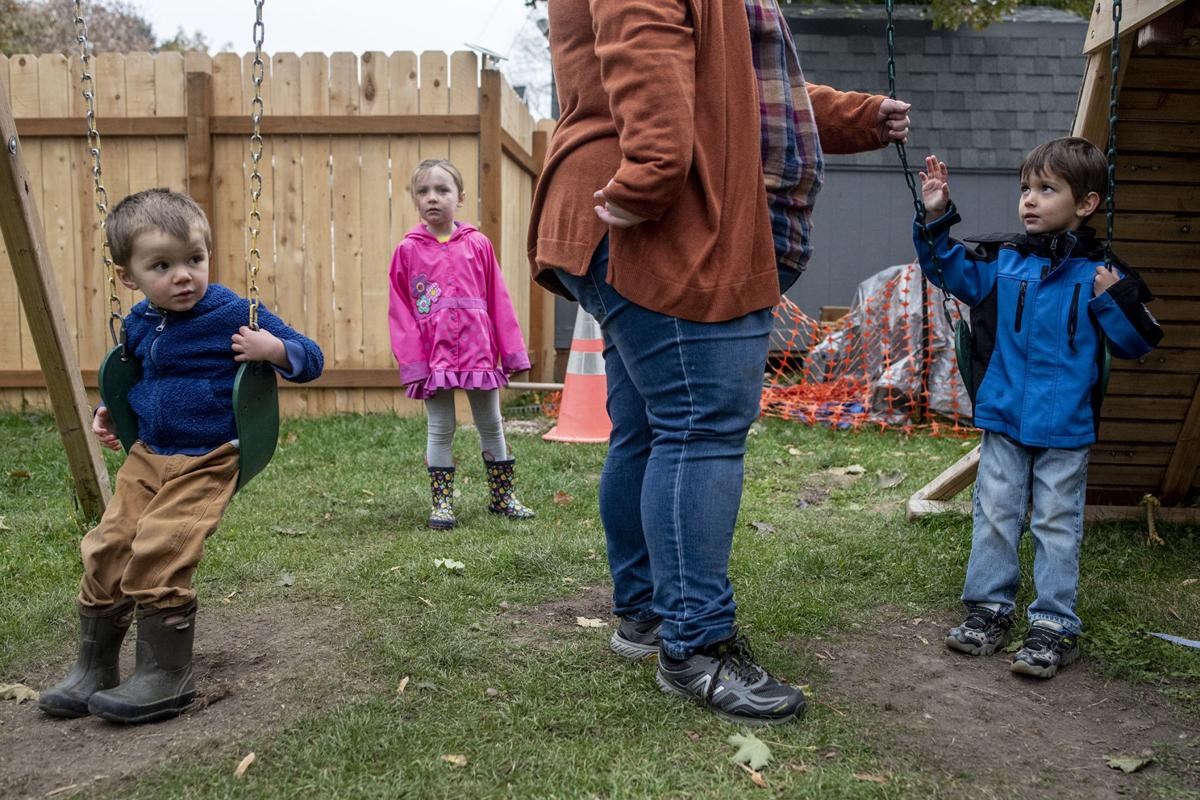 Holly Hanley, second from right, one of the Wild Wonders helpers, looks after the children in the backyard. Wild Wonders can provide care for up to 12 children with a maximum of six infants. 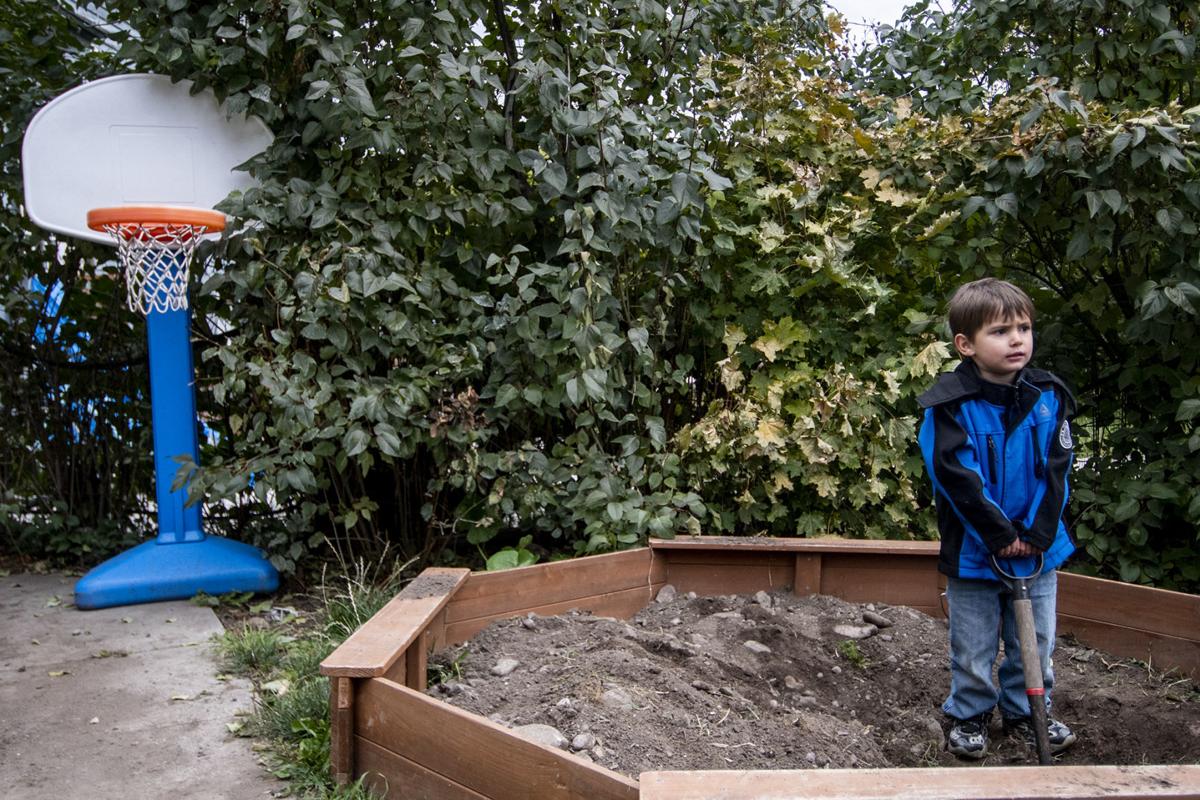 Jaxson, a child at Wild Wonders Early Learning Program, waits for his friends to dig a hole in the backyard on Thursday.

BriAnne Moline embraces her son Carl, 3, one of the many children she takes care of at the in-home Wild Wonders Early Learning Program in Missoula on Thursday. Moline moved the child care business into their home on Edith Street in June this year.

Holly Hanley, second from right, one of the Wild Wonders helpers, looks after the children in the backyard. Wild Wonders can provide care for up to 12 children with a maximum of six infants.

Jaxson, a child at Wild Wonders Early Learning Program, waits for his friends to dig a hole in the backyard on Thursday.

Brianne Evans bundled up four infants and placed them one by one in an oversized stroller Thursday morning outside Wild Wonders Early Learning program on Edith Street. Crisp temperatures in the low 50s made it the perfect day for an autumn stroll, although Evans said she takes the infants on walks every day regardless of the weather.

"It's so important for them to get outside like this," Evans said.

Wild Wonders is one of a dwindling number of licensed child care programs in Missoula that offers infant care. Like the majority of programs offering similar care in Missoula, the home-based program owned by BriAnne Moline has a waiting list for infants.

The solution might seem simple: open more programs. Yet homeowners insurance laws and low wages pose major obstacles to current and prospective program owners' ability to open or expand program offerings — or even to continue operating, as Moline has found.

As a state-licensed group home child care program, Moline has the capacity to care for seven to 12 children, with a limit of six under the age of 2, alongside another adult. Her three sons attend the program, which she runs out of her home, and she has a fourth child on the way.

She got into the industry soon after she had her first son and started working as a preschool teacher's aide.

"I just discovered that I loved learning about child development and doing my research to better my parenting skills," she said.

She continued working and went on to earn her associate's degree from the University of Montana–Western, but when she was nine months pregnant with her third child, the preschool she worked at closed. She not only lost her job, around the same time, she lost her son's spot on a waiting list at a different day care; without a job, she couldn't afford a different option.

In March 2017, she opened her own program, which she later developed with MyVillage, a company that helps providers open and run in-home programs. The company, founded by Erica Mackey and Elizabeth Szymanski, provides a "business in a box" to make it easier for people to open their own programs.

"We work through the licensing process, get support and training on early childhood development, help with all the business infrastructure and paperwork required to get your business going, we help market, we provide the curriculum and liability insurance, and then we connect them with a local mentor and also a global support network," Mackey said.

Moline is now a mentor for the program, which she said helped her understand how to run a business. The company helps providers overcome many obstacles, but in Missoula and across Montana, homeowners insurance laws hinder program offerings.

Last year, Moline had to relocate her business due to county covenants that she found prohibited her from operating a business from the home she was renting.

She moved to her current house on Edith Street, a small home with a porch decorated with carved jack-o-lanterns and dangling ghosts. Her family resides in the home's basement for the most part, and the first floor is dedicated to the business.

Moline said she would love to expand and maybe even open another group home, but right now her focus is on trying to find another place to rent come June when her lease is up.

She recently found out that she won't be able to renew her lease because state homeowner insurance laws exclude child care programs, making it difficult or impossible for providers to operate whether they own or rent the property.

She had planned to stay in the home she's renting for the next few years. She transformed the home's living room into a playroom, converted one bedroom into a room for infants, and outfitted the backyard with an array of toys scattered around a swing set.

She's still searching for a new location and also partnering with the Missoula Chamber of Commerce as they look at solutions to help alleviate the city's lack of affordable child care options.

Moline doesn't want to operate a larger program from a center, which would be one way to avoid the insurance obstacle, because she prefers the home-based setting. Opening a center would also require significant upfront costs that many providers like Moline just don't have.

"I've worked really hard to get where I'm at with a Star Four (quality rating), and I want to start working toward a Star Five ... I'm told that I can easily get there this year, but I have put that on the back burner because of all this," Moline said.

Moline said in addition to earning a higher star rating, she wants to finish her bachelor's degree in early childhood education from the University of Montana so she can offer education for kindergartners and first-graders, especially those that need more assistance than can be found at a lot of other programs.

She's working with local and national organizations such as the National Association for the Education of Young Children to advocate for high quality care and push for the development of nationwide standards, and to professionalize the field.

"You have a lot of generations that just look at it as babysitting," she said. "I still correct my family to call it an early learning program. I'm not a daycare, not child care."

Moline said she hopes professionalizing the field will help increase wages for workers, which are often only slightly above minimum wage. Moline said she thinks more child care and early learning programs should be subsidized by the government, adding that Best Beginnings only covers part of the rate for families, leaving quality care out of reach for many the program intends to serve.

She pointed out that a lot of fields such as health care and even food service are considered public goods and subsidized by the government.

"Why isn't it early learning?" Moline said. "Zero to five is the most important time for a child's brain development, and families are left alone trying to cover the cost of it."

Evans, the lead infant toddler teacher at Wild Wonders, said she loves working in child care and would love to stay in the field, but some of that decision will depend on pay.

"Wages are low and that can be really frustrating for a lot of people," Evans said. "Right now for me, it’s OK, but in the future, I would really like to see some, like federal funding for higher wages because we have a lot of training."

Child care in Missoula: 'They should call me as soon as they know they’re pregnant'