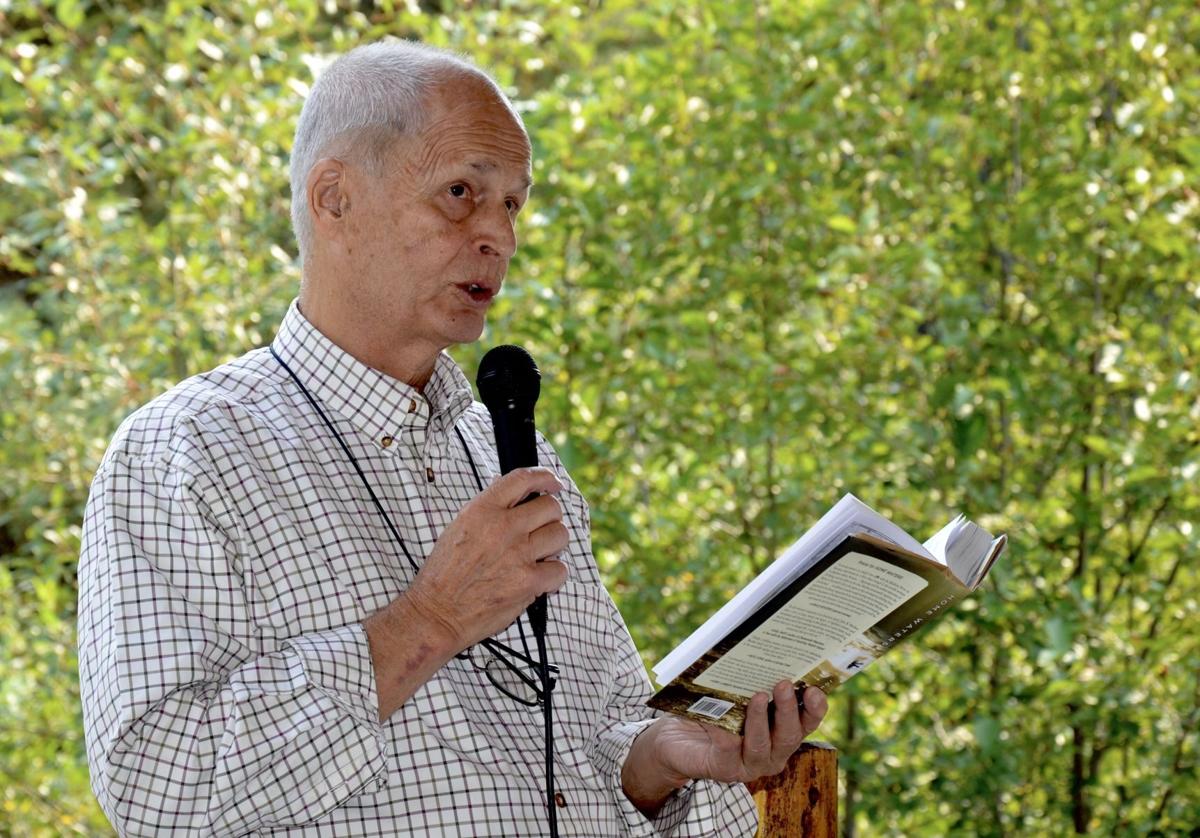 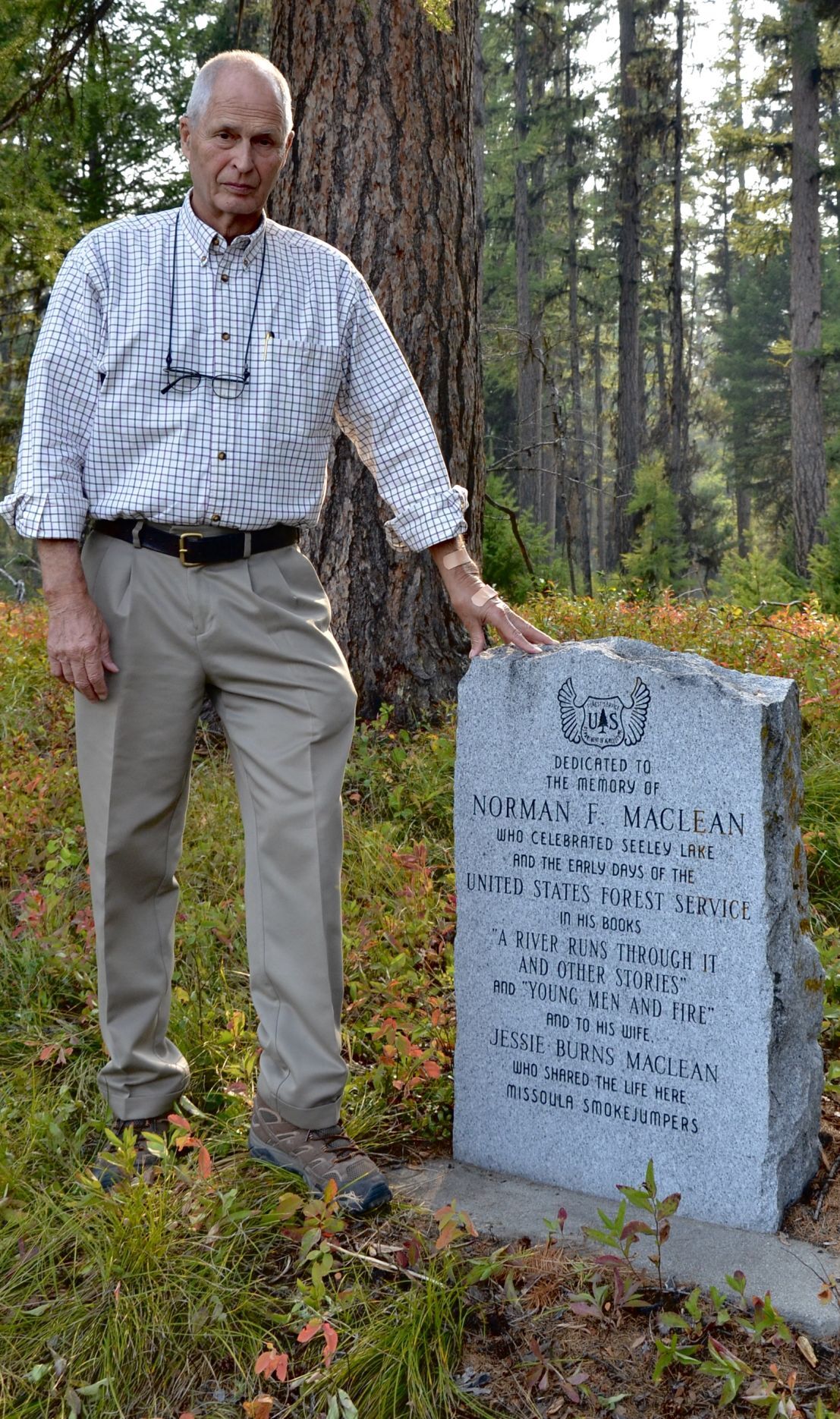 SEELEY LAKE — In asking his audience to look back at a favorite story, reporter and author John Maclean hopes they will look forward to protecting what made the tale matter.

“'A River Runs Through It’ made trout fly-fishing a global phenomenon,” Maclean said of his father Norman Maclean’s bestselling novella. “Now we need to deal with it in a sensible way.”

The younger Maclean has written five books about wildland firefighting after spending 30 years reporting from Washington, D.C. for the Chicago Tribune. But “Home Waters,” released this summer, focuses on how his father’s book came to be and the historic and natural features that shaped it.

Longtime Seeley Lake resident Addrien Marx introduced Maclean for the few in the audience of 160 who might not have been personally familiar with him and his literary legacy.

“John, you’re bringing a conversation today for people who love this area,” Marx said. “People read a book and transport themselves there. But for us, you’re writing about home.”

“A River Runs Through It” is a novella and short story collection about growing up fishing and working in the mountains of western Montana in the 1920s and ’30s. Robert Redford turned it into a movie, which helped launch the career of actor Brad Pitt as John Maclean’s charismatic uncle Paul, a legendary fly fisherman but unlucky gambler.

Together, the book and movie get lots of credit or blame for turning Montana into a recreation destination. But “A River Runs Through It” turns more around the challenging relationship between Norman and Paul, and their father, the Rev. John Maclean of Missoula’s First Presbyterian Church. It ends tragically, with Paul’s murder.

In “Home Waters,” John Maclean reveals a confounding detail. The book and movie conclude with Paul being killed over a gambling debt at Lolo Hot Springs. He actually died after an unexplained beating in Chicago, where he was a newspaper reporter.

John Maclean said his father took the liberty of writing fiction, not memoir, in moving the location of his brother’s death. In doing so, Norman Maclean transformed Paul’s end from “a meaningless murder in a Chicago alley” into something more — and that something has resonated with readers ever since.

“He’d get fan mail, saying ‘I had siblings who were troubled and I offered something of myself and it was refused,'” John Maclean recalled. “They felt alone. But then they’d say how ‘I read the story about how this suffering was taken to an eloquent level, and I was comforted.’”

“Home Waters” contains another serendipitous anecdote of the Macleans’ time in Missoula: The impact of the 1918 Spanish flu pandemic. It notes how a group of soldiers at Fort Missoula enjoying a Sunday partying in town triggered an outbreak.

The following Monday the Missoulian recorded that the Spanish flu had infected the post and 25 men had been "quarantined for examination." The disease traveled quickly in wartime, with troops moving easily by train and concentrated in places like Fort Missoula. Montana lost a recorded 4,187 people, then about 1 percent of its population, to the flu.

Maclean adds how churches curtailed services for weeks during the height of the pandemic to protect their congregations, but “saloonkeepers, though, kept their doors open until near the end of the pandemic.” In the years-long process of developing “Home Waters,” he had no inkling that history would repeat itself just as the book was coming off the press.

Mixing the lore of his own family with the environmental history of Lewis and Clark’s exploration of the Blackfoot and the geology of Glacial Lake Missoula prompted Maclean to call his new book a chronicle rather than a memoir. Its higher purpose, he said, was to encourage readers to protect the places like Montana trout rivers that they love, and prevent them from being loved to death.

“We’ve got real problems that need unending effort to fix, and we don’t have much of that now,” Maclean said. “If someone’s encouraged by reading ‘Home Waters’ to help preserve this, I would consider that an enormous success.”

“You really feel like you’re in alpine country up here,” said Missoula resident Marcy Colyer, who was making her first exploration of the trail on Thursday with friend Mary Donnelly.

Missoulian press goes silent; newspaper will be printed in Helena

At 10:50 p.m. on Sunday, pressman Larry Sorenson pushed a button and the “Red Monster” groaned to a halt.

A 12,000-acre swath of forest between Bonner and Seeley Lake has moved into public ownership through a deal with the Nature Conservancy and th…

A $2.5 million grant University of Montana wildlife disease ecologist Angela Luis recently received to study hantavirus does have some implications for COVID research.