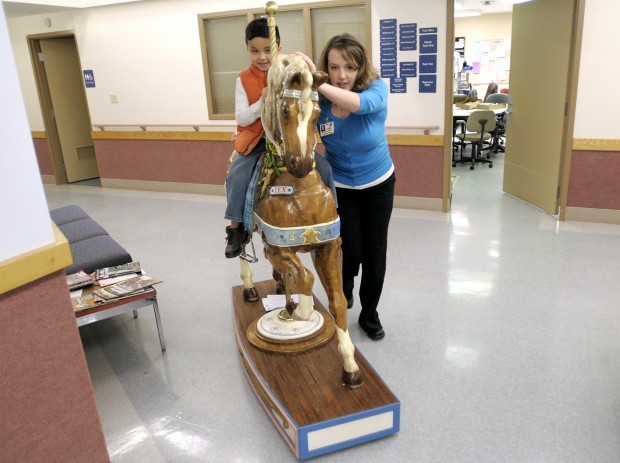 Speech therapist Erin Schwisow pushes Jeremiah Martinez on a carousel horse through the halls of the rehab center of Community Medical Center on Friday. Therapists at the hospital have found, almost by accident, that the horse on wheels helps Martinez and other children with speech problems. Photo by TOM BAUER/Missoulian 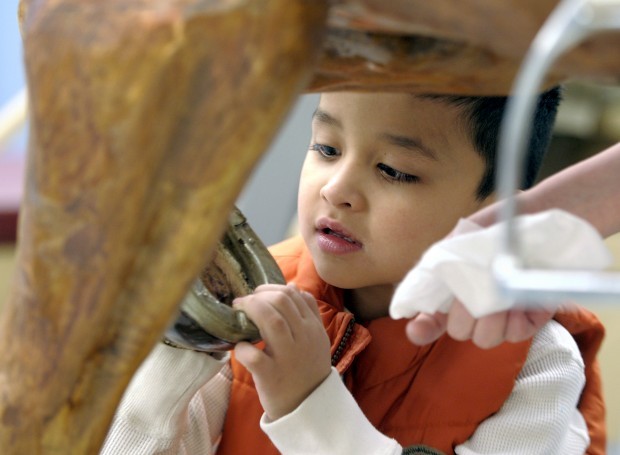 Martinez examines the hoof of the wooden horse during his therapy. Photo by TOM BAUER/Missoulian
By MICHAEL MOORE of the Missoulian

Friday was V-Day for Jeremiah Martinez.

He’s 5, so his V-Day has nothing to do with stopping violence against women or Valentine’s Day.

Instead, it was literally about the letter V.

Jeremiah, a kindergartner at Target Range School, has a problem articulating some letters. And that’s why he spent part of Friday morning with speech therapist Erin Schwisow and a wooden horse on loan from A Carousel for Missoula.

“Try again, and remember to tickle your lip,” the therapist said.

“Now, do you want to go for a ride?” Schwisow asked.

With that, Jeremiah mounted a wooden horse named Tex, who carries a bouquet of yellow roses and a blue saddle blanket. Seconds later, Schwisow rolled an excited boy through the halls of the rehab center at Community Medical Center.

“It’s amazing what the horse has done for the kids I work with,” Schwisow said. “Using a carousel horse isn’t really something we learned in school, but he’s been an extraordinary tool for me. The kids, even children who won’t talk, just really respond to the horse.”

When CMC occupational therapist Nancy Kinsey first arranged to borrow a horse from A Carousel for Missoula, she had a particular patient in mind.

“This was somebody who had horses at home and I thought we might find some use for it in his therapy,” Kinsey said. “He was grateful and it was all fine, but nothing really extraordinary.”

Not that anybody would have had extraordinary expectations. After all, it’s just a wooden horse on wheels.

But what happened next cheered the hearts of nearly everyone in the rehab center.

“It’s been an amazing turn of events,” Kinsey said. “Something I never anticipated.”

Not long ago, Erin Schwisow was working with a young boy who has serious problems speaking.

“I took him down for a ride on the horse and he just opened up in a way that I really didn’t believe,” she said. “That sparked something in my mind.”

Soon enough, she was using the horse with most of her pediatric patients.

Using objects is nothing new in speech therapy with children. Therapists often use a series of props to calm anxious children, to bring them out, to spark some affiliation that might lead them to talk.

“We might use blocks, a toy truck, stuffed animals, a lot of books,” Schwisow said.

Schwisow works with a lot of autistic children, kids with severe behavior issues and major problems verbalizing their thoughts.

“With some of these children, the horse has proved to be an incentive, a reward for their work,” she said. “But for others, it seems to have sparked a joy that brings them out and makes them verbal.”

In fact, Schwisow has had kids who rarely utter a sound become verbal on Tex.

“I had one little girl that used maybe 10 words,” she said. “But with the horse, she just blossomed. You can see it in her eyes.”

“Vehicle” came out perfect on V-Day. But “video” came out “vileo,” so Jeremiah tried a few more times and finally got it right.

Then, inexplicably, Tex slowed as Schwisow and Jeremiah made their way down the hall.

“He’s out of word energy,” Schwisow said. “Can you give him some more?”

Jeremiah launched into a enthusiastic version of the ABC song, wrapping it up with Schwisow’s help on the chorus.

“Now I’ve said my ABCs, let’s go horsey, run with me,” they sang in unison.

As the session wound down, Schwisow and Jeremiah gave Tex a “bath,” then rolled him into his “barn” for a “nap.”

“It’s gotten a little silly,” Schwisow said, “but the way it’s opened these kids up, well, it’s definitely worth a little silliness.”

“This has been something of a revelation for me,” said Schwisow. “It’s really opened my mind to new ways we can work with children.”

Reporter Michael Moore can be reached at 523-5252 or by e-mail at mmoore@missoulian.com.

Students at Loyola High School have since come together to respond to a toxic environment and are calling for immediate change.

From Idaho to Montana, Ethyl the bear rambled 2,800 miles

A radio-collared grizzly sow took a 2,800-mile trek through Montana and Idaho. Her trail shows the many places bears may soon inhabit as their numbers increase.

The owners of the popular Kamoon and Ragheef food trucks, which have been operating in the Imagine Nation Brewery parking lot, have purchased the old Tia’s restaurant building at 1016 W. Broadway.

A 25-year-old Colorado skier missing since Thursday was found deceased Friday on the Idaho side of the divide.

Officials are asking the public to call 406-758-5600 or email tips@flathead.mt.gov with any information about the incident.

The bodies have been transported to the medical examiner in Missoula for autopsies.

Nathan B. Harbison, 35, is accused of physically abusing and attempting to sexually assault a woman at her house.

The identities of two people who lost their lives in an apparent homicide-suicide shooting in Big Arm on Wednesday have been released.

Speech therapist Erin Schwisow pushes Jeremiah Martinez on a carousel horse through the halls of the rehab center of Community Medical Center on Friday. Therapists at the hospital have found, almost by accident, that the horse on wheels helps Martinez and other children with speech problems. Photo by TOM BAUER/Missoulian

Martinez examines the hoof of the wooden horse during his therapy. Photo by TOM BAUER/Missoulian
© Copyright 2022 Missoulian, 500 S. Higgins Missoula,MT | Terms of Use | Privacy Policy | Do Not Sell My Info | Cookie Preferences
Powered by BLOX Content Management System from TownNews.com.
You don't have any notifications.