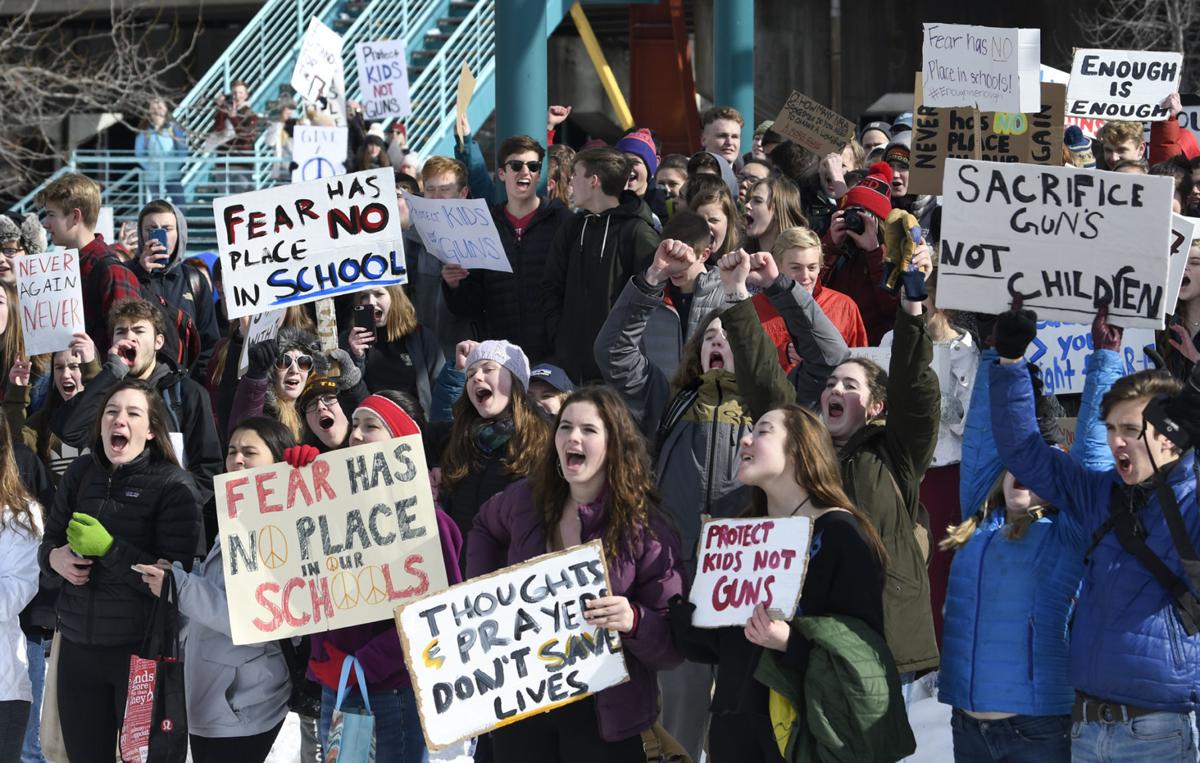 Hundreds of students from Missoula's Hellgate High School rally in Caras Park after walking out of class on Wednesday afternoon to call for stronger gun laws in the wake of the recent school shooting in Parkland, Florida. The students lined the Higgins Avenue bridge for about 30 minutes before marching through downtown and gathering at the park before returning to school. 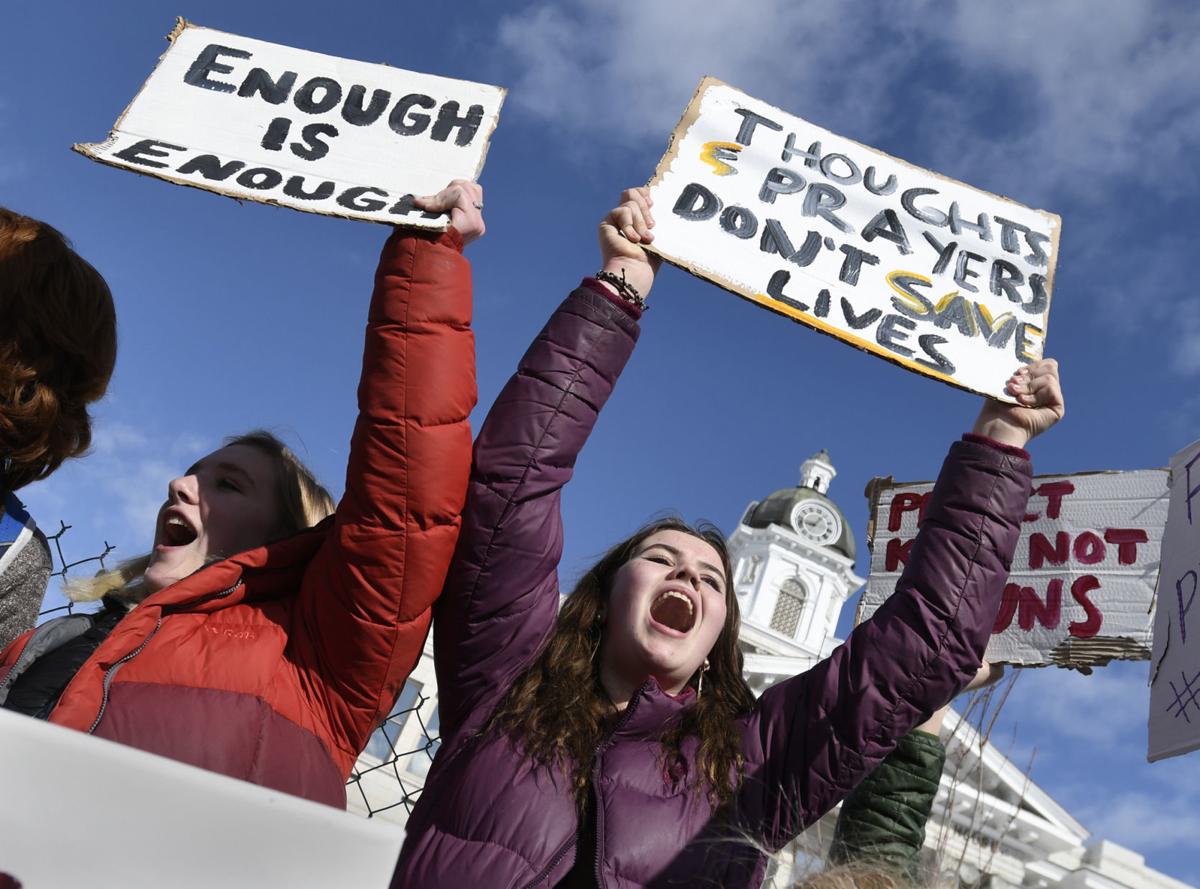 The students walked through downtown and around the Missoula County Courthouse where they stopped briefly to chant for their cause. 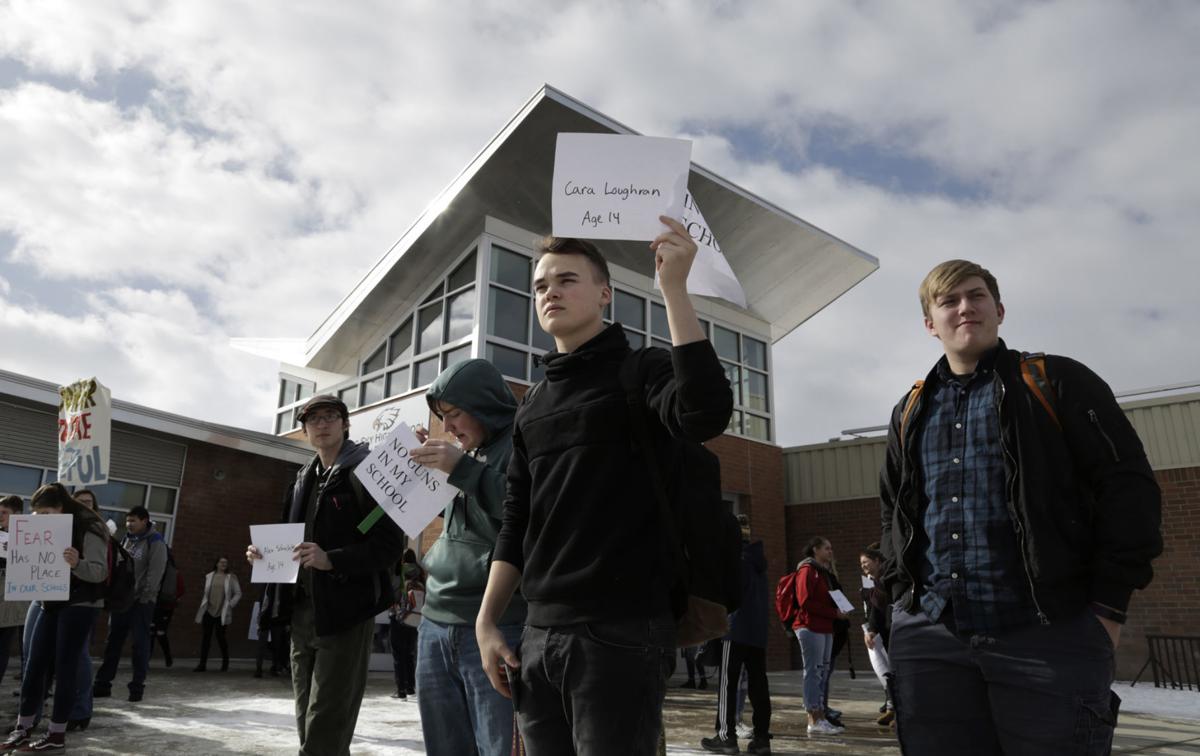 A student from Big Sky High School holds a sign with the name of one of the 17 victims killed in the Florida high school shooting last week. About 50 students walked out of school on Wednesday in protest of gun violence.

Before noon Wednesday, the fire alarm went off at Hellgate High School and the building evacuated, though many students had already planned to leave.

Hundreds of students with signs that read things like “Enough is Enough,” and “Protect Kids Not Guns,” walked toward the Higgins Avenue bridge. People driving by honked their horns in support of the walkout.

Students had different reasons for marching: to protest Montana’s lenient gun laws, to bring attention to the lack of security at their high school, to stand in solidarity with the survivors of the Marjory Stoneman Douglas High School shooting in Florida that left 17 people dead.

“In my opinion it’s sad that it’s taken this long for people to get this upset about it,” said Henry Charman, a senior at Hellgate who helped to organize the walkout. He noticed other schools were planning walkouts on Twitter, and thought his school should join as well.

“It’s really cool and powerful to see how they’re using social media as a tool,” Charman said of the students in Parkland, Florida. “It’s become a really big thing and its unprecedented. I love to see my generation using its voice more.”

Dozens of Big Sky High School students also walked out of their classes, and a handful stayed out protesting until around 2 p.m.

After a stop on the bridge, Hellgate students continued marching through downtown, passing Sen. Steve Daines' office and the Missoula County Courthouse, with a final stop at Caras Park before they returned to school. MCPS Communications Director Hatton Littman said normal attendance procedures are followed when students leave class, so parents will be notified if their kids were absent.

“People our age are being affected and we want to show that we have a voice and we have opinions on this,” she said.

Her classmate Matthew Knight, 16, said he’s protesting the “lack of any strong response from our government officials.”

“If they can’t take it into their own hands then we’re going to do it ourselves,” he said.

Hellgate principal Judson Miller said while the school cannot officially endorse the student protest, they can make it a safe space for students who decide to participate. He said he told staff to use this as a teachable moment, and he spoke to the school newspaper about the protest as well.

"This is a real opportunity for students to demonstrate responsibility," he said. "If I give you a lot of responsibility, you need to help peer monitor each other."

Miller also said there is an ongoing investigation about who pulled the fire alarm. He suspects it was related to the protest, and if a student is found responsible, he or she will be charged with a misdemeanor.

Some faculty and parents also joined the students, walking alongside them. Susan Snetsinger, whose child goes to school at Hellgate, came out to support “the kids taking leadership.”

“It’s heartbreaking that kids are having to take leadership on an issue like this,” she said. Snetsinger said she planned to attend the PTA meeting at Hellgate on Thursday night to ask about what the school is doing to protect its students.

Hellgate School Resource Officer Jim Johnson honked at the protesting students while driving over the bridge. He said school shootings are a tragic thing and something they need to be prepared for. Active shooter training and more drills can help students in that situation, he said.

Johnson also suggested tighter security measures — cameras, monitoring exits and training staff regularly. He said he doesn't like protests because they can be dangerous, but he understands why the students decided to walk out.

"They're exercising their right to free speech, and I think it makes people feel better if they can do this," Johnson said. "They feel like they need to do something, and in that way I think it's good, it kind of brings the school together."

Hundreds of students from Hellgate High School and about 40 from Big Sky High School stage a walkout Wednesday, February 21, in support of str…

University of Montana enrollment down again

Philipsburg student arrested, charged with felony for threats to school

When the Montana Board of Regents hired a corporate executive to lead the University of Montana, it brought a business and military profession…

Only about 1,200 tickets are left for Pearl Jam's Aug. 13 concert at Washington-Grizzly Stadium. They were scheduled to go on sale at 10 a.m. …

Montanans are feeling the ripples from the nation’s deadliest high school shooting, which left 17 students dead in Parkland, Florida, as stude…

HAVRE — For the first time in three years, Montana’s smallest ski hill is open for business.

Federal officials must go back and review documents related to the disputed Keystone XL oil pipeline, under a Wednesday court ruling that came after environmentalists accused President Donald Trump's administration of withholding details on the project's approval.

Wildlife official broke the law by giving grant to nonprofit his wife worked for, investigators say

Investigators say a senior official at the U.S. Fish and Wildlife Service broke the law with his involvement in awarding $324,000 in conservation grants that benefited his wife. Details on the conflict of interest finding were revealed in a report released by the Interior Department's Office of Inspector General. Investigators say that as chief of the agency's international conservation division Richard Ruggiero authorized grant awards to a nonprofit group where his wife worked as a contractor.

First show at Bobcat Stadium in Bozeman since 1981: Imagine Dragons

A new and improved Milltown State Park has a tentative public opening date, and it may include a significant addition when the public finally …

The U.S. Forest Service hopes to double the workload of its volunteer helpers as it attacks a backlog of trail maintenance largely in Montana.

Béla Fleck and the Flecktones and Slightly Stoopid will headline concerts at the KettleHouse Amphitheater this summer.

Trees, shrubs to be removed at Van Buren exits before spring construction

Rebuilding of Sperry Chalet begins with an open house

There are 73 breweries in Montana, with 12 more set to open this year, and that means beer is not only popular for consumers here but is an im…

Weeks after prosecutors dropped a charge of vehicular homicide while under the influence, the driver whose SUV hit and killed Benno Big Back J…

State mining permits could be denied if polluted water requires perpetual treatment, under a ballot initiative submitted for review Wednesday.

Darby Superintendent Loyd Rennaker has confirmed another social media threat toward the school on Wednesday, but said it is not on lockdown.

A Capital High School student was removed from class on Tuesday after posting a Snapchat video with a pistol in it.

Letters to the editor: What to do about gun violence

The Missoulian has received many letters to the editors on gun violence after the recent high school shooting in Florida.

Big Sky High School was under a perimeter lock-in Thursday after graffiti was found in a girls' bathroom that reads "Don't be at Big Sky at 1:…

Student barred from Missoula high school, allegedly threatened to 'shoot up this school'

In 2 decades in Montana, gun legislation has been more about increasing access than limiting it

Since the shooting and killing of 17 people at a high school in Parkland, Florida, on Feb. 14, the Montana chapter of Moms Demand Action For Gun Sense has been busy.

RICHMOND, Va. — As schools around the country brace for student walkouts following the deadly shooting in Parkland, Florida, principals and superintendents are scrambling to perform a delicate balancing act: How to let thousands of students exercise their First Amendment rights while not disrupting school and not pulling administrators into the raging debate over gun control.

Students around Montana plan to walk out of school Wednesday for 17 minutes, one minute for every life lost at last month’s school shooting in…

Hundreds of students from Missoula's Hellgate High School rally in Caras Park after walking out of class on Wednesday afternoon to call for stronger gun laws in the wake of the recent school shooting in Parkland, Florida. The students lined the Higgins Avenue bridge for about 30 minutes before marching through downtown and gathering at the park before returning to school.

The students walked through downtown and around the Missoula County Courthouse where they stopped briefly to chant for their cause.

A student from Big Sky High School holds a sign with the name of one of the 17 victims killed in the Florida high school shooting last week. About 50 students walked out of school on Wednesday in protest of gun violence.