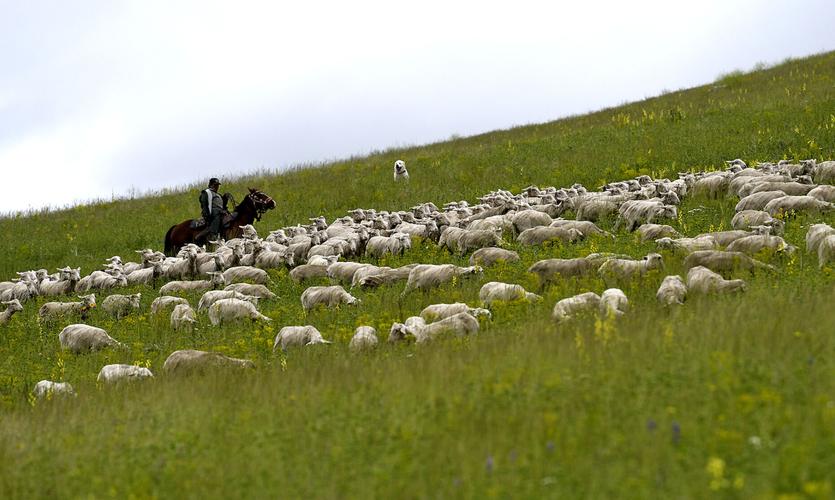 Sheep graze on flowering weeds on Missoula's North Hills on Monday. The sheep are being used help control non-native species. 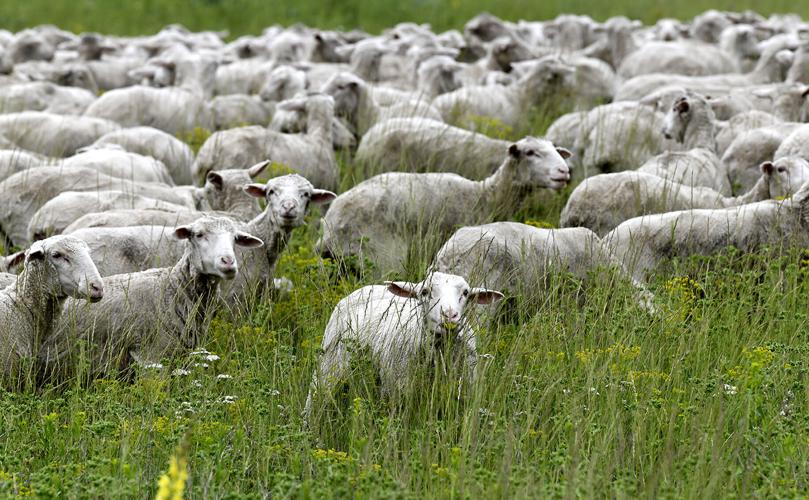 The 805 sheep from the Helle Rambouillet ranch in Dillon are attracted to flowering plants like Dalmatian toadflax, leafy spurge and spotted knapweed. 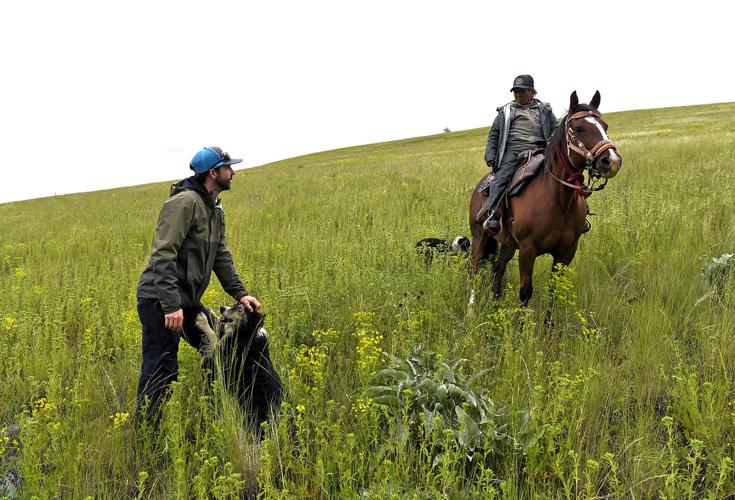 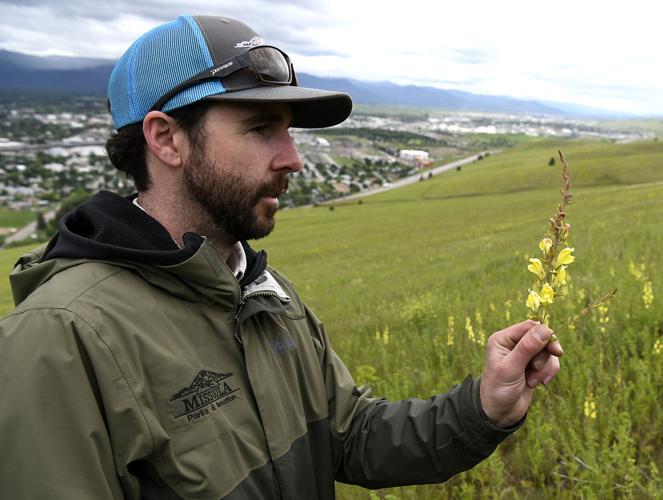 Jeff Gicklhorn holds a piece of Dalmatian toadflax, one of the invasive species spreading on the North Hills. 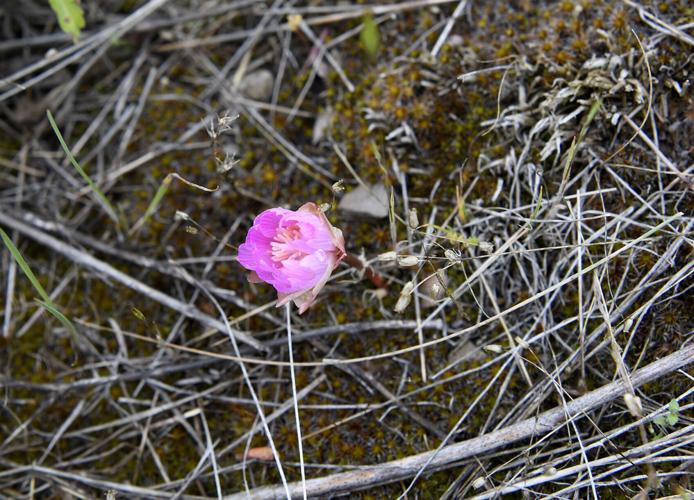 Native bitterroot flowers are showing up in the North Hills above where the sheep are grazing on invasive plants.

The invasive weeds infesting the hills surrounding Missoula have had a five-year break to multiply without disruption. Last weekend, they suddenly became fair game for 805 hungry sheep looking for lunch.

This year, the City of Missoula contracted with the Helle Rambouillet ranch in Dillon to graze sheep on public lands in order to beat back non-native species like Dalmatian toadflax, leafy spurge and spotted knapweed.

The energy those sheep get from snacking on the unwanted plants will be converted into their thick, insulating Merino wool, which will then end up on storeshelves as performance apparel from the Montana-based Duckworth brand.

"The grazing program is a cost-effective, sustainable way to control noxious weeds on conservation lands and encourage the beneficial and beautiful wildflowers and native grasses we all enjoy,” said the city’s conservation lands manager Jeff Gicklhorn.

The herd has started munching the North Hills, and will graze other areas through late July.

Because they’re attracted to flowering plants, sheep selectively target invasive weeds while native grasses are mostly left undepleted. The native flowering plants like lupine can handle a little bit of grazing, and almost all of the native bitterroot flowers are higher than the grazing area.

Gicklhorn said the plan is to graze the weeds for a few years before using a targeted herbicide to really beat back and destroy the invasive species, thereby returning the grasslands of the hills to their more natural state. The weeds won’t be completely eradicated, but careful management can keep them from creating uncontrollable infestations. The grazing also reduces wildfire risk.

Grazing areas are completely closed to dogs this year because of the size of the sheep herd and the risks to both sheep and domestic dogs.

“At over 800 head, this by far the largest grazing project the City has ever undertaken,” Gicklhorn noted. “In the past, we’ve had maybe 100-200 sheep on open space lands. With a herd this large, the potential for injury to both sheep and domestic dogs increases exponentially.”

That’s because the horseback-mounted Peruvian sheepherder hired by the ranch also has a specially-trained Great Pyrenees guard dog that sleeps with the herd and is trained to protect the sheep.

No matter how well a pet dog is trained, the instinct to chase could put both it and the sheep in danger.

“Livestock guardian dogs are not friendly toward other dogs or humans,” Gicklehorn explained. “They are trained to attack predators and can severely injure or kill a domestic dog.”

He said nobody wants to see a sheep or a pet killed, so people should really take the dog closures seriously.

“By working together, residents, pet owners and land managers can save money, preserve the natural landscape, and reduce the need for chemical herbicides,” Gicklehorn said.

John Helle, the third-generation owner of the Helle Rambouillet ranch in Dillon, is a co-founder of the Duckworth brand. He said Missoula’s grasslands are good-quality range for the animals.

“We’ve been doing grazing programs like this for 30 years and plan to have as little impact as possible on Missoulians who recreate on these lands,” Helle said. “We’ll be bringing in a larger herd than you’ve likely seen in the past, which means we’ll be able to move from one location to the next quicker and finish in less time.”

Next March, the Rambouillet sheep will be shorn and their Merino wool will be sent to facilities across the United States for spinning, knitting, dying and garment manufacturing. Helle said that wool has made a resurgence in popularity in recent years after losing ground to synthetic fibers.

"Merino wool is really a magic material," he said, noting that sheep have been selectively bred to make sure the wool is less itchy on human skin.

The initial North Hills temporary dog closure includes the Froelich (Orange and I-90), Waterworks, and Mountain View trailheads from approximately June 20 to July 10. The Waterworks trailhead remains closed for construction but should re-open by mid-July. During the temporary closure, dogs are permitted at the North Hills Sunlight Lands trailheads but must be under excellent voice recall or leashed. Later in July and into August, the herd will move to the Sunlight lands and then Mount Jumbo’s southern face and Saddle area. Missoula Animal Control will help enforce the closures.

The project is being funded by the 2018 Conservation Lands mill levy.

Visit Missoulaparks.org for closure maps, which will also be posted at trailheads.

A Mexican food truck and a local mobile tiki bar are partnering up. Also, Missoula's free bus service is starting Sunday routes for the first time ever, and the Poverello Center is hosting a picnic.

Kevin Costner was pictured this week perusing Scheels in Missoula, while lawmakers debated whether or not to extend and increase a tax credit designed to attract film moguls back to the state in the future.

Missoula's shelters for those without housing see big surge in utilization

"In regards to not improving because of individuals experiencing houselessness, it may be counter intuitive, but vibrant parks that attract residents are safer," said a city official.

“It’s definitely been more than I intended to take on but it’s super cool where it’s at," said co-founder Kiah Hochstetler.

Jane Goodall to speak in person at UM on Sunday

Goodall's talk, "Hope Through Action," is a part of the university president's lecture series.

Pearl Boba Tea is returning to downtown Missoula, and a 73-room hotel with a Black Coffee shop is also opening up downtown. Also, Bob's Sew and Vac is closing after many decades in business.

Biden meets with governors after overturning of Roe

Eight reported killed at protests against military rule in Sudan

Eight reported killed at protests against military rule in Sudan

Sheep graze on flowering weeds on Missoula's North Hills on Monday. The sheep are being used help control non-native species.

The 805 sheep from the Helle Rambouillet ranch in Dillon are attracted to flowering plants like Dalmatian toadflax, leafy spurge and spotted knapweed.

Jeff Gicklhorn holds a piece of Dalmatian toadflax, one of the invasive species spreading on the North Hills.

Native bitterroot flowers are showing up in the North Hills above where the sheep are grazing on invasive plants.