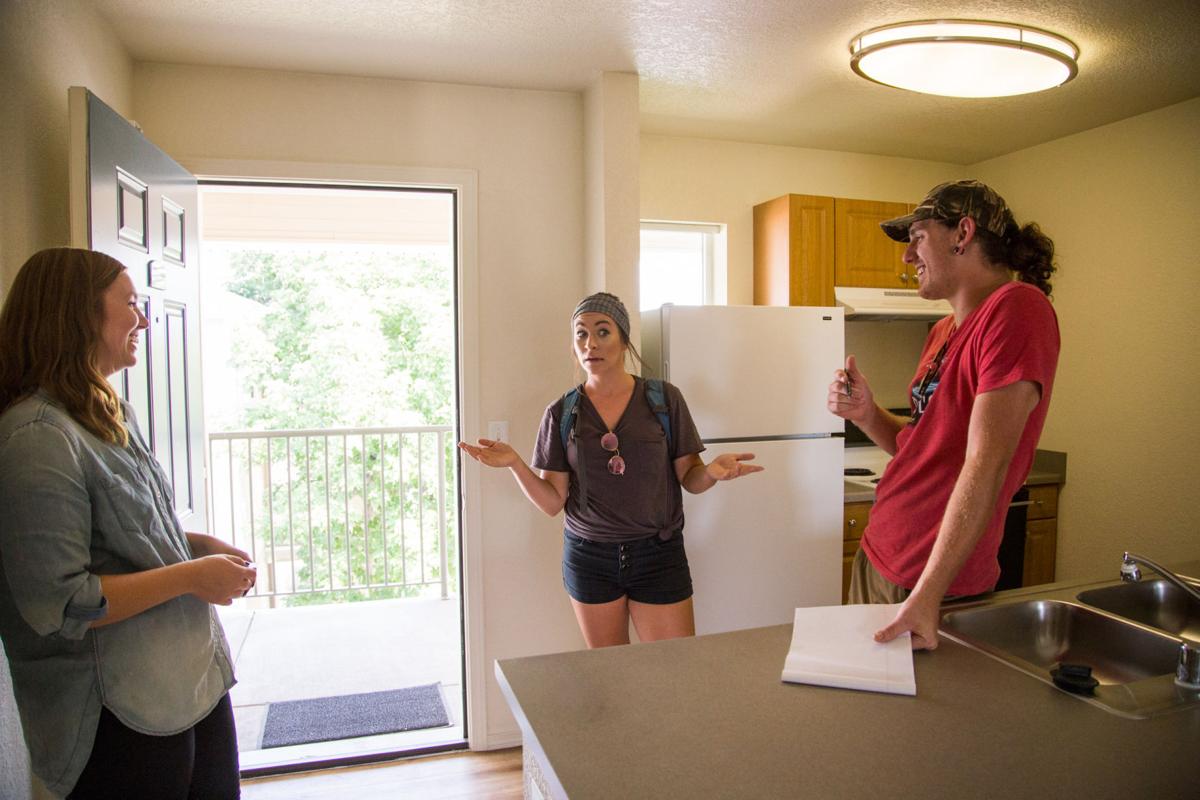 Carly Wingert, center, and Matt Metzger discuss the difficulties of their housing hunt, and the possibility of renting the unit that Maggie Scott, Copper Run's assistant manager, is showing them. 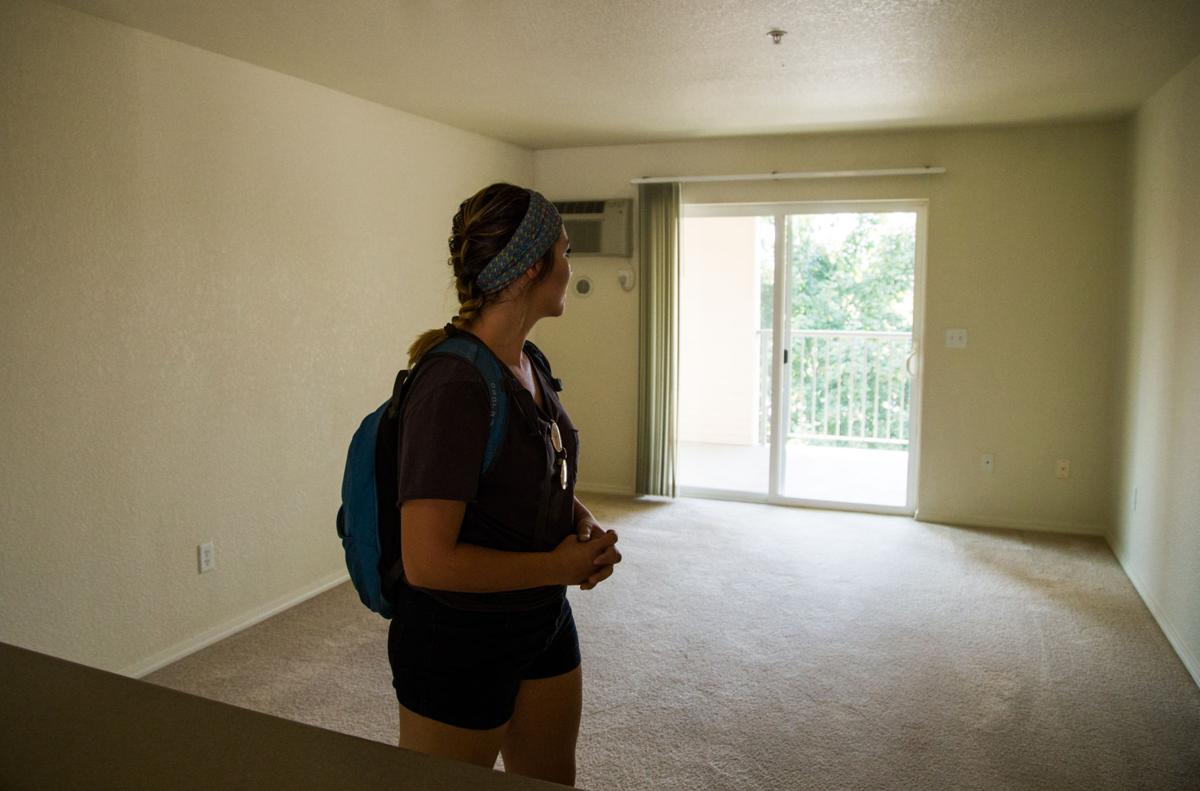 Carly Wingert checks out an available unit in the Copper Run apartments at the North end of town, near Mullan and Reserve. Wingert and her Boyfriend, Matt Metzger, are among the many students hunting for housing during the fall semester rush.

When Matt Metzger and Carly Wingert showed up to view apartments early Friday afternoon at a complex on the south end of town, the property management office was closed.

Another tenant pointed them to the mailbox with applications they could take and fill out. But it was empty.

So they were off to make more calls. They'd already looked at a couple of places, including one that still was under renovation.

"It's not easy at all," Metzger said.

After looking at just a handful of units, they were already talking about how to adjust their budget and possibly work overtime to afford a suitable home.

Wingert and Metzger plan to finish their degrees at the University of Montana — he's studying wildlife biology and she's interested in literature and the environment. They're among a slew of students looking for housing around the same time.

Despite all the construction that's been taking place in Missoula, the rental market remains tight. In its 2017 housing report, the Missoula Organization of Realtors reported that the pace of construction increased in 2016, but the annual rental vacancy rate declined to 2.9 percent.

"While a decline of 1.2 percent in the vacancy rate typically wouldn't be of concern, Missoula's already-low rates make a tight rental situation incredibly more so," stated the report. "And this is despite additional units coming onto the market as well as the decline in enrollment at the university."

The number of units already permitted may mean a little more give in the market down the road.

Jordan Lyons, director of the Associated Students of the University of Montana Renter Center, said students have a few more hurdles than other tenants looking for homes.

"Probably one of the biggest is they're all looking at the same time," Lyons said.

They may not have a long rental history or much credit history, and may not have cars to drive to look at units, he said. And most property management companies are charging application fees; websites show nonrefundable rates of generally $20 to $40 per applicant.

Lyons recommended that house and apartment hunters keep their wits about them so they don't get caught in a bad situation. For one, he said, take care to look at the condition of the unit and document it, and review the old condition report from the previous tenant.

"The No. 1 complaint is definitely disputes about getting security (deposits) refunded and damages that come out when people move out," Lyons said.

To ensure a unit is safe, he also suggested students use the city of Missoula's inspection service; it usually costs $15, but he said it's free for students.

He advised students to talk with him before moving into an apartment. His office is at the University Center on campus, and he's reachable at 406-243-2017.

"It seems like a crisis when you're looking for housing, but it's important to take a breath," Lyons said.

Missoula appears to be on track to make a dent in the need for more housing in the future.

"All that was doing was accommodating the new growth that we were seeing," Haynes said.

He said conservative estimates pegged growth at 1,000 to 1,100 more people a year, roughly the number who could live in the new homes being built. Last year, though, the city permitted 775 units.

"That was when the needle started to move," he said.

This year, he said it has already permitted 514 units in seven months.

There's a lag time from when the city issues permits for units and when they're actually built and available, but Haynes said the numbers are encouraging.

"I think that should ease the upward pressure that we've been seeing on rents," he said.

The drop in the vacancy rate did not push up rental prices in 2016, although some students looking now are seeing higher prices, at least for studio apartments, which go for roughly $500 to $750, the Realtors' report noted.

Some of the new projects coming online are higher-end condominiums, but Haynes also anticipates "workforce housing that regular Missoulians could afford," too.

A couple of new projects are targeted specifically to student tenants.

At the Old Sawmill District, the U-Global project broke ground recently on a development that will consist of 52 units of pod-style apartments, each with four bedrooms and private bathrooms, a common living area, kitchen and washer and dryer.

Downtown, a six-story, 488-bed housing complex on East Front Street near Kiwanis Park is expected to be complete in late spring 2018.

Lori Davidson, director of the Missoula Housing Authority, said she's excited to see those projects go up because her agency generally can't serve students. The wait for a housing voucher is so long, she said, most people are in and out of school before they reach the top.

The exception is the Silvertip Apartments, which the agency owns. Students account for 30 percent to 35 percent of the renters at the East Broadway complex, and Davidson anticipates the student population will increase since Missoula College opened its new location nearby.

Generally, though, Davidson said renters in Missoula are looking at a tight market and prices that are higher than many can afford.

"Rental housing is still just as hard to find as it's been for the last 15 years," Davidson said.

Students live on campus, too, of course, and Sandra Curtis, director of residence life, said she believes there's an adequate supply of university housing. The residence halls can accommodate roughly 2,250, she said. University Villages has 563 different apartments, and Lewis and Clark Village can house 462 students.

Even when UM had its highest enrollment and students were temporarily camped out in dorm lounges, Curtis said they eventually got rooms once the university accounted for no-shows and other departures. The enrollment headcount last fall between UM and Missoula College was 12,419.

"We do have some space available for students, and we would be happy to help them out," she said.

Metzger and Wingert landed in Missoula on Wednesday, made appointments to see homes on Thursday, and were on the hunt Friday.

They moved from Springfield, Missouri, where rent is more affordable. Their research in advance of the move clued them in to the type of challenge they'd face in Missoula, although possibly not the degree.

"(Springfield is) a really inexpensive place to live, and there's an abundance of rental properties," Metzger said.

"So this is really different," Wingert said. " ... It's challenging, but we expected it to be challenging."

One place just off Reserve Street cost $911 a month for one bedroom, not including energy, although including amenities such as a gym and fire pit.

The couple's parameters were price, places that allow not only dogs but pit bulls, and if not the latter, the opportunity for a short-term lease in order to find a place for their dog. They're nontraditional students returning to college part-time for now to complete degrees, and they both plan to work full time.

"There are a lot of really nice apartment options. They are a little bit pricey," Metzger said.

The biggest complaint Metzger had about the search was the restriction many places have against specific dog breeds. The couple left their pup Tula in Missouri for now; she's docile, but she's a pit bull, and they knew they'd need extra time to find a place that would have the three of them.

Following suit with the city, Missoula County is likely to have a tax decrease this year, after initial budget calculations predicted an incre…

Candidates drop out of city elections

Three candidates for city offices have dropped out of contention in the 2017 election before the final deadline Monday night.

University of Montana vice president for administration and finance Mike Reid accepted a position at Sierra Nevada College on Lake Tahoe. His …

Carly Wingert, center, and Matt Metzger discuss the difficulties of their housing hunt, and the possibility of renting the unit that Maggie Scott, Copper Run's assistant manager, is showing them.

Carly Wingert checks out an available unit in the Copper Run apartments at the North end of town, near Mullan and Reserve. Wingert and her Boyfriend, Matt Metzger, are among the many students hunting for housing during the fall semester rush.