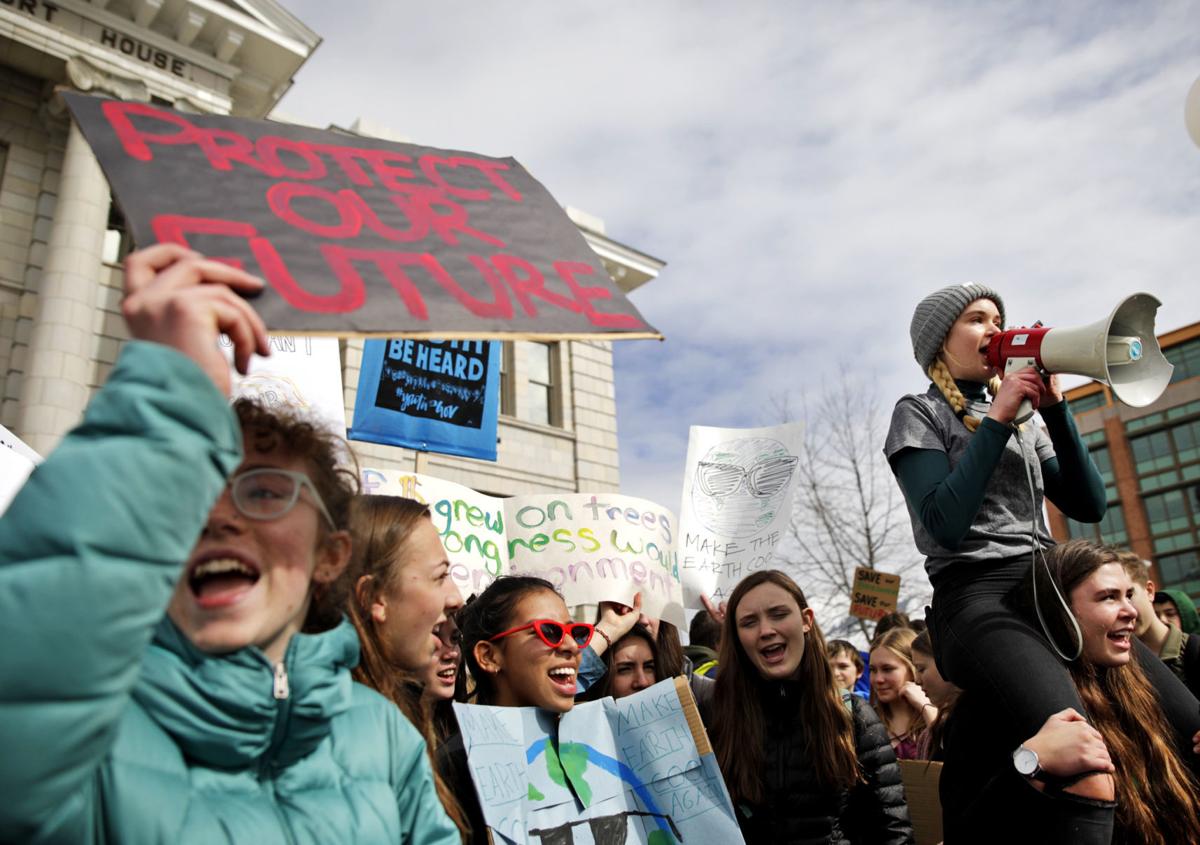 Ella DeGrandpre, top right, sits on the shoulders of Aileen Beaton, as the two Hellgate High School seniors lead a chant in front of the Missoula County Courthouse on Friday afternoon. Students from Hellgate and Big Sky high schools joined students around the country in a march demanding action on climate change. 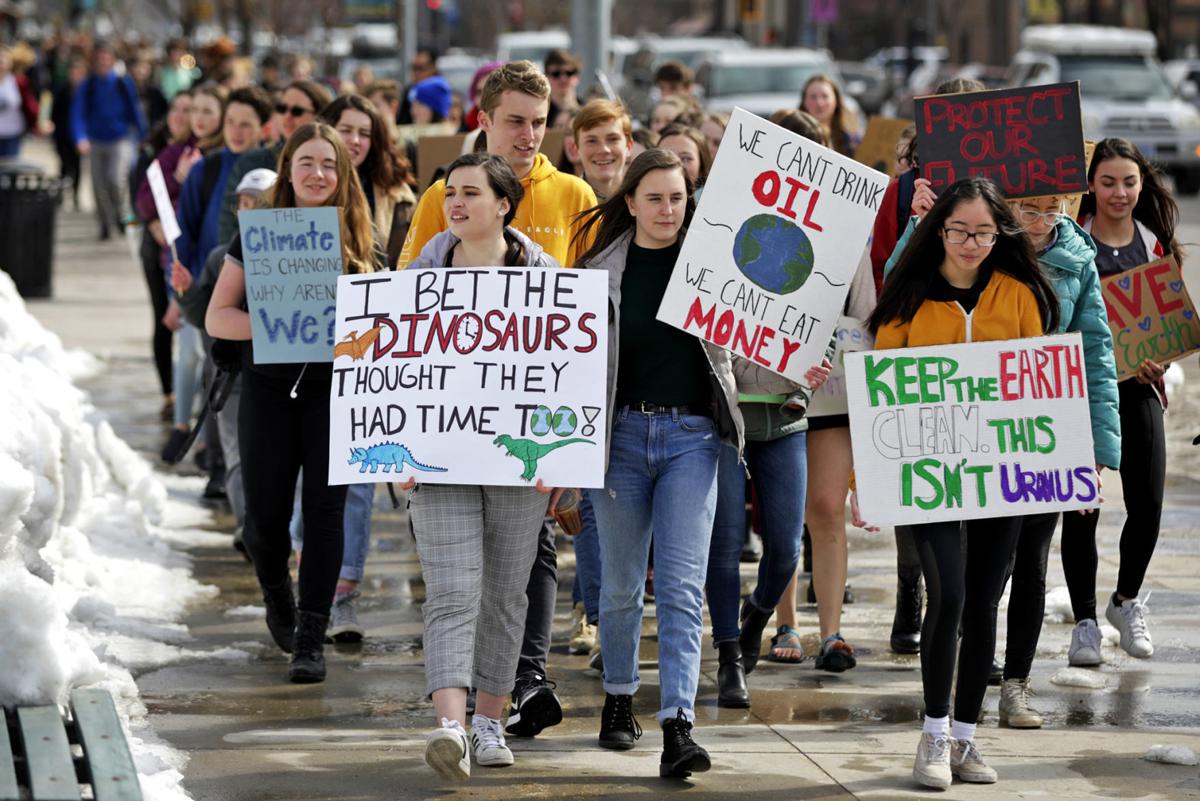 Hellgate High School students hold signs and chant as they make their way to the Missoula County Courthouse from the school on Friday afternoon. 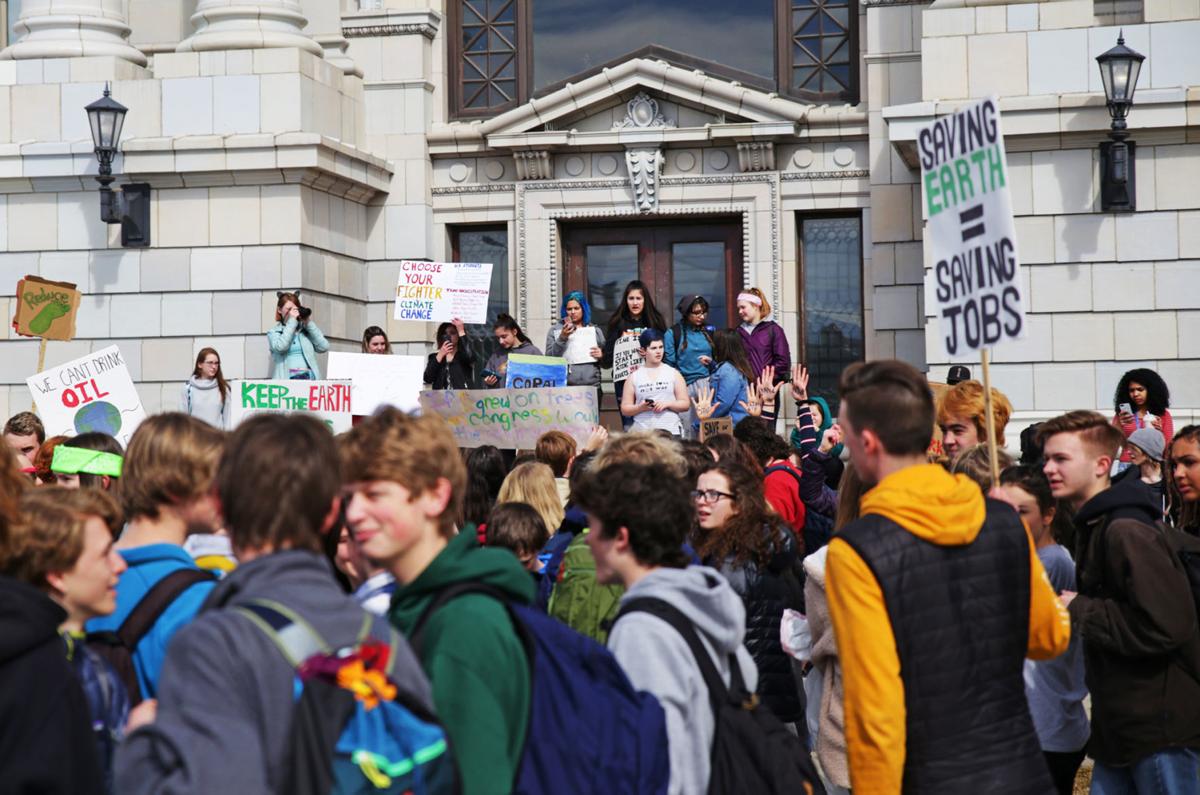 Ella DeGrandpre, top right, sits on the shoulders of Aileen Beaton, as the two Hellgate High School seniors lead a chant in front of the Missoula County Courthouse on Friday afternoon. Students from Hellgate and Big Sky high schools joined students around the country in a march demanding action on climate change.

Hellgate High School students hold signs and chant as they make their way to the Missoula County Courthouse from the school on Friday afternoon.

More than 200 Missoula high school students left class early on Friday afternoon to participate in an international school walkout and call for action on climate change.

The students from Hellgate, Big Sky and Sentinel high schools marched through downtown Missoula carrying signs that read “Make earth great again,” “Policy change for climate change,” and “What I stand for is what I stand on.”

The students were among more than 150,000 students around the world who walked out of school Friday to protest inaction on climate change in the "Youth Climate Strike."

Passerbys on the street took videos and cars honked as they drove by a hoard of students from Hellgate spanning the entire length of the Higgins Street bridge as they walked to meet students from Big Sky and Sentinel.

Together, the students marched to the courthouse where they chanted “Hey hey, ho ho, fossil fuels have got to go,” sometimes interchanging the second part of the verse with “climate change has got to go.”

Other students chanted: “What do you want? Climate action. When do you want it? Now.”

Gillian Sherrill, a sophomore at Hellgate, carried a sign that read: “Sea levels are rising and so are we.”

“It's time to change something,” Sherrill said. “If no one does anything about it, it's not going to be an issue of whether or not we have energy that people are using. It's going to be whether we can continue living here and eventually it's just not going to be an option anymore.”

Sherrill was one of many students at the march who said they want the government to cut down on greenhouse gas emissions and shift to using renewable energy sources instead of coal and fossil fuels that pollute the environment.

“If the policies stay the same and our actions stay the same, by the time I'm old enough to be able to truly affect change, we’re not going to have that option,” Sherrill said.

Student marches in the U.S. were inspired by protests that began after Swedish teenager Greta Thunberg delivered a powerful speech at the United Nations climate summit in December 2018 that criticized lawmakers for their inaction on climate change.

The movement spread to the U.S., where youth are pushing for change as concern over climate change grows. The issue hits home for many students like Sherrill, who consider how it could affect their home state.

“We live in a state that's kind of notorious for the beautiful landscape and just the outdoor activities and if the climate is continuously getting worse, Montana is no longer going to be known for that,” Sherrill said. “That's our state’s reputation and I want to keep it that way.”

Students also brought up their frustrations that climate change has become a politicized debate despite mounting evidence.

“It doesn't feel like it should be political,” said Kaylee Holdsambeck, a sophomore at Big Sky who said she is not part of a political party. “It started becoming debated because people were saying that is a debated topic.”

“It's not something that needs to be debated; it’s facts,” added Mya Toone, a sophomore at Big Sky and co-president of the school’s new environmental group called Leaf.

“Our school is very divided on it,” Farago said, pointing to the size of their environmental club, which looked like a group of friends in comparison to Hellgate’s mob of at least 100 students.

“That's the thing with our school is that we get such a backlash with other students,” Farago said. “Some of them are very extreme Republicans. Even when we are walking in the hallways, a lot of people were like ‘Why are you doing this? That’s stupid.'”

Farago and Mitchell said that while there are a lot of kids at their school who don't think climate change is real, they think the majority of students recognize that it’s a major issue.

Students from all the Missoula schools said that overall, their teachers were supportive of their decision to leave school early for the march.

Kathleen Kennedy, a science teacher at Big Sky, took a personal day to “serve as an ally” for students marching.

“Our school, our district, they have to make sure that we're not taking political action but I would argue that this is a moral imperative,” Kennedy said. “But just to keep controversy out of it, I decided to take a personal day.”

Kennedy has taught science for over 20 years. Climate change is a topic that she said gets brought up naturally. She said she’s heartbroken that there hasn’t been more change in the time she’s spent educating students on the issue, but she’s impressed by the movement.

“Nationally, students are leaving their schools because they are saying ‘Why should we be educated for a future we don't know will exist?’” Kennedy said.

Students at the Missoula march echoed the hope that the movement will help politicians realize the importance of taking action on climate change is to the youth.

“It's very frustrating because our voices aren't being heard because we can't vote,” Holdsambeck added. “But that just means that we have to find alternatives like today.”

One person was killed, a Montana Highway Patrol trooper was in critical condition and two others were hospitalized after a shooting spree in M…