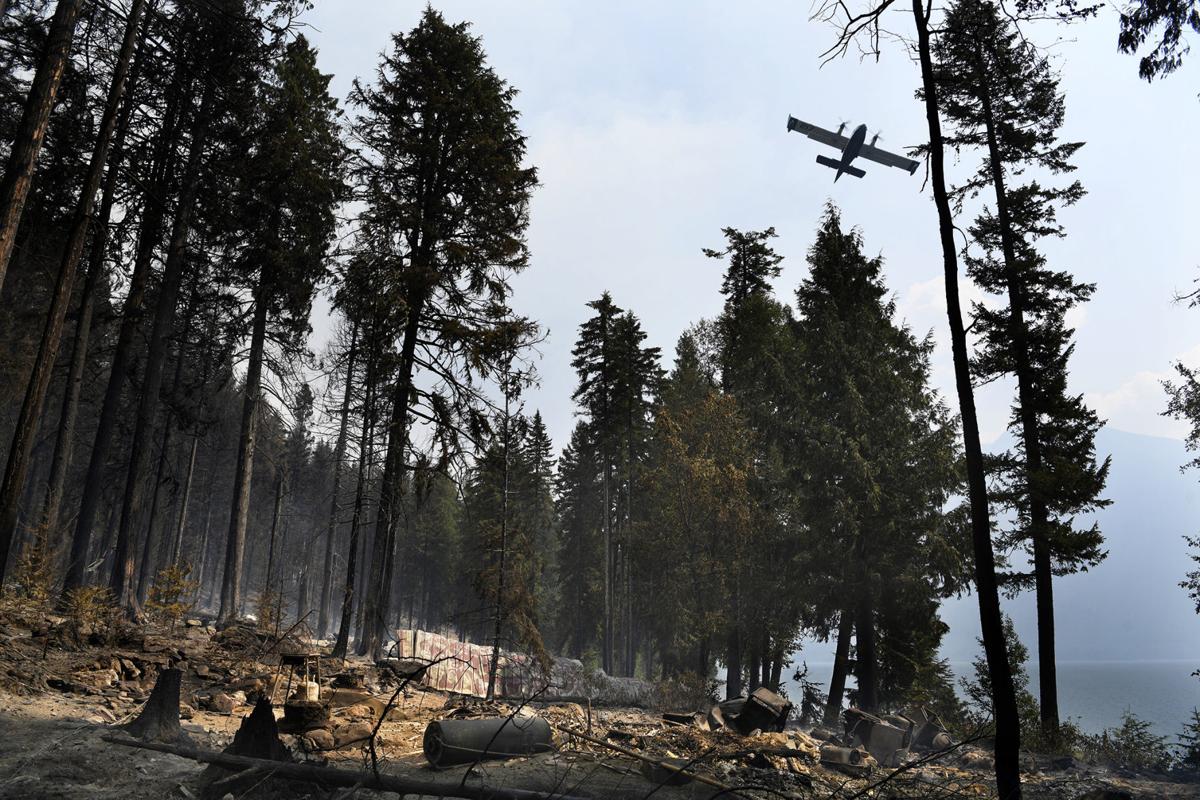 A CL-215 "Super Scooper" flies to a drop point near the Kelly's Camp historic district on Monday afternoon. The Howe Ridge fire has burned at least 4,000 acres since ripping through the area last Sunday. The planes have been used on and off since the fire was started by lightning on Aug. 11. 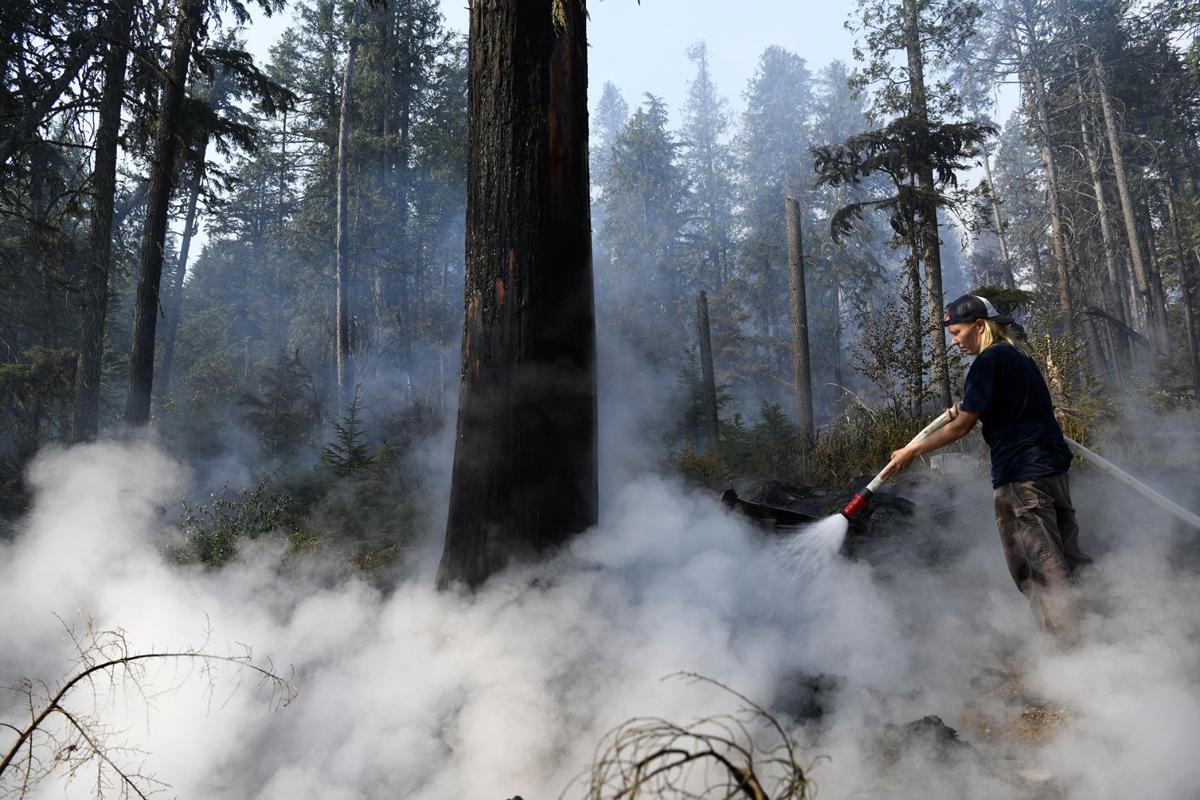 Heather Hodges hoses down a hot spot near a friend's cabin in Kelly's Camp Historic District after the Howe Ridge fire ripped through the site overnight on Sunday, Aug. 12. 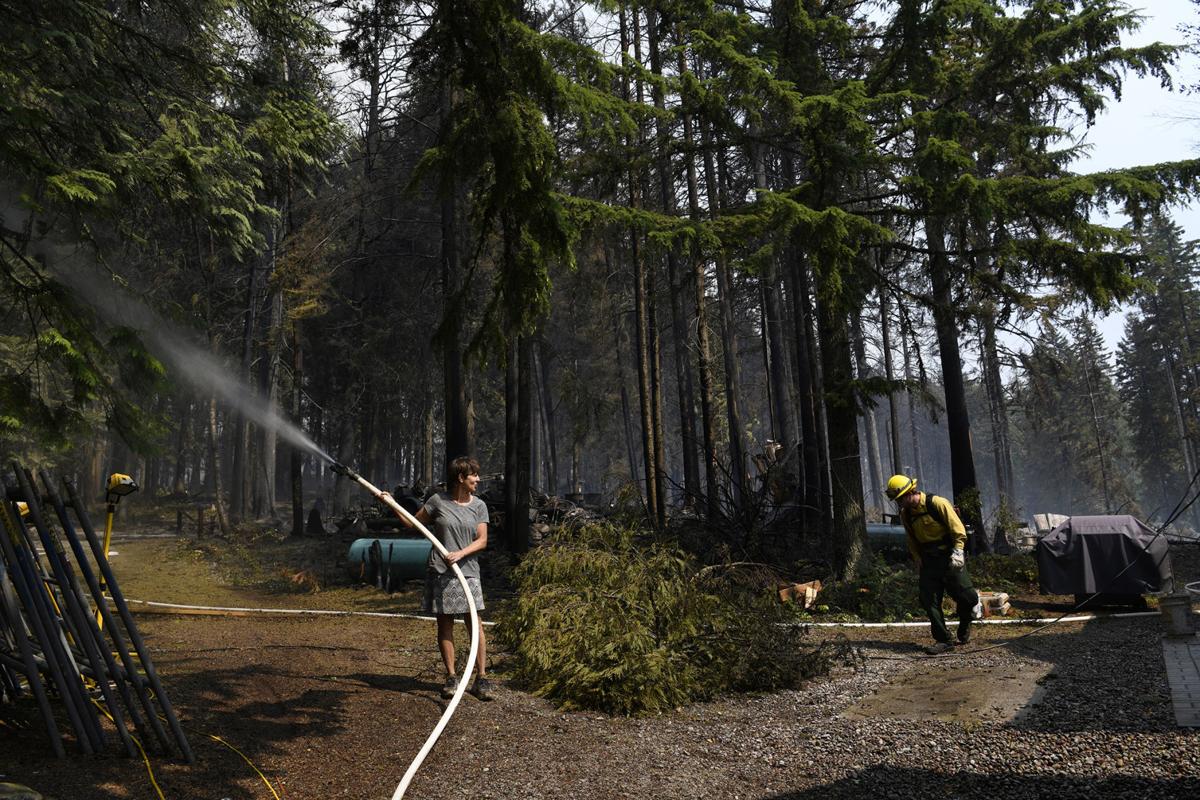 A Kelly's Camp resident hoses down a hot spot near one of the remaining structures in the historic district as she talks to a firefighter accessing the scene.

A CL-215 "Super Scooper" flies to a drop point near the Kelly's Camp historic district on Monday afternoon. The Howe Ridge fire has burned at least 4,000 acres since ripping through the area last Sunday. The planes have been used on and off since the fire was started by lightning on Aug. 11.

Heather Hodges hoses down a hot spot near a friend's cabin in Kelly's Camp Historic District after the Howe Ridge fire ripped through the site overnight on Sunday, Aug. 12.

A Kelly's Camp resident hoses down a hot spot near one of the remaining structures in the historic district as she talks to a firefighter accessing the scene.

GLACIER NATIONAL PARK — Around 10 p.m. last Saturday night, Randy Harrison got a phone call from his niece, Aidan Myhre. A lightning strike had ignited a forested patch of Howe Ridge above Lake McDonald.

Myhre could clearly see the flames from her cabin near Lake McDonald Lodge. But from Harrison’s property across the lake, about 100 yards from Kelly’s Camp on the lake’s west shore, the ridgetop blaze was invisible.

“I went out in a kayak and sure enough, there was a fire,” he remembered.

Within 24 hours, that fire would be licking at his property and others on Lake McDonald’s west shore. Its rapid growth, and the race to escape from harm’s way, have underscored the risks of living along this beautiful but isolated lakeshore.

None of this seemed likely Sunday morning, as another typical day began in Glacier. All but a few trails were open, and drivers were making their way up the Going-to-the-Sun Road.

Those in the Lake McDonald area could see a slender plume of smoke rising from Howe Ridge. “Literally, I watched nonstop from the time I woke up till 10 o’clock when we were evacuated,” Myhre said.

Glacier took the threat seriously enough to call in CL-215 "Super Scooper” aircraft. They flew for about four hours, skimming water from the lake and dropping it on the fire. “If you're in the Lake McDonald area today, you may catch a bit of an air show,” Glacier posted on its Facebook page around 1 p.m. Sunday.

“We were all aware of it and watching it,” said Eric Kildahl, also in the Lake McDonald Lodge area. “It was pretty mellow until about 3 o’clock on Sunday.”

But as the afternoon waned, the fire surged.

“What I saw was this fire moving very quickly across the mountain and, surprisingly, going down drainages,” Myhre remembered. “Once it started moving you could just tell how dry and brittle everything was, because it launched.”

The blaze far outpaced established protocols. Park spokesperson Lauren Alley wrote in an email that “the park's ideal circumstance is to give 72 hours notice (evacuation warning) for a possible evacuation order.”

“In many circumstances,” she said, “the fire response organization is somewhat established by the time an evacuation warning is needed, which gives a fire team the opportunity to study fire behavior, do some modeling, and develop a prediction about how fire is anticipated to move. That was not the case with the Howe Ridge fire.”

Myhre’s no stranger to Glacier’s hazards. Her mother bought the family cabin in 1972, and Myhre’s spent every summer of her life in the park. But even then, “I’m still a bit in shock at how the fire moved. I don’t think anyone could’ve predicted the movement that took place on Sunday.”

Watching it advance from across the lake, Myhre could tell that “by Sunday evening, it was an inferno.”

As the flames raced closer to the cabins, the source of their charm — an isolated setting at the base of thickly forested slopes — became a liability.

“We don’t have cellphones up there,” said Myhre. Service drops off soon after leaving Apgar Village. “Many people don’t even have landlines anymore.”

She managed to reach neighbors across the lake around 6:30. “I called a couple people and said, ‘Get out,’ and they said, ‘Oh, we’re just having appetizers down on the deck,’ and I said ‘No, get out.’”

“Part of what prompted some people to get out was her direct phone call,” surmised Kildahl.

Meanwhile, Glacier rangers started knocking on doors. Around 7 p.m., Alley said, “three rangers in the immediate Apgar-Avalanche area responded to evacuate the residences along the narrow North McDonald Road.” About 50 individuals own homes along this road, which follows the west shore of Lake McDonald.

“As off-duty rangers and other park staff found out about the evacuation, they helped. … Rangers arrived to find some landowners had already left, and were thankful those residences were empty. They moved to other areas, finding residents still in harm’s way, and continued with the evacuation.

“Rangers encountered flames and fire conditions on North McDonald Road, on both sides of the road on their way out. Also on their way out, they encountered one resident attempting to get back in for more belongings, and assisted that landowner backing down the road as the road was too narrow to turn around.”

Still concerned, at 8 p.m. Kildahl and some others crossed the lake in his boat to see if anyone remained at Kelly’s Camp. Fortunately “everybody was out” by the time they arrived.

"It was clear from our standpoint that the road was toast well before that," Kildahl said.

Conditions stayed bearable a bit longer at the lake’s northern tip, site of the historic Walsh Lodge. Its current owners, Dana and Will Wright, and their son and his girlfriend stayed on, trying to hose down the historic structure amid flying embers and exploding trees.

Soon after, the entire area had been evacuated. One witness after another has since voiced gratitude for firefighters’ actions amid this fast-moving fire.

“From my perspective, you have to balance or understand what the Park Service is dealing with and be grateful that nobody did die,” said Myhre.

Randy Harrison, however, was rattled by the lack of communication Sunday.

“Between the lightning strike and us leaving at 3 o’clock, there was never any notice. By 3 o’clock it was a pretty good-sized fire.”

Glacier “never telephoned or sent a ranger to our cabins to tell us to evacuate” in that time, he said.

As they day went on, park staff shared periodic updates on the fire through press releases and social media. “But we don’t have electricity in our cabin,” Harrison said. “We can’t get emails. How difficult would it have been to knock on our door and say, ‘Be prepared to get out of there?’”

Some attendees at a residents’ meeting Monday night echoed his concerns, and questioned the Park Service’s response to the fire. (A second meeting was scheduled for Saturday night, Aug. 18. See related story.)

In Myhre’s view, the agency did the best it could with the resources it had. But she also thinks those aren’t sufficient “From my perspective, the Park Service is completely understaffed to deal with the millions of people who come in,” a sentiment shared by some Glacier employees.

While Glacier has exclusive jurisdiction over emergencies inside park boundaries, it can request mutual aid from Flathead County, a step it took for structural protection Sunday night. But Flathead County Sheriff’s deputies were not involved in the evacuation, Alley said, due to the relatively small size of the affected area.

Some of the task of preparing also falls to those who choose to live in the area, she wrote in an email. “Each summer the park holds a general landowner meeting. … One of the primary topics is fire safety and we talk about being in a constant state of readiness, and that the park will try to give folks as much warning as we can, but that it may not be possible.”

Looking ahead, Myhre — a Helena-based lobbyist whose clients include AT&T — thinks landowners will need to look at better communication and possibly cellphone service uplake. But as is, she said, “We’re fortunate to have a fairly tight-knit community, and that makes reacting to something like this much stronger.”

They can’t let their guard down yet, said Eric Kildahl, still working in the affected area Thursday afternoon. “The sad thing is, it’s the middle of August. We’ve got six [more] weeks of fire season, probably.”

He commended the firefighters and agencies involved for their support, and added that he would like to see at-risk buildings wrapped in fire-retardant foil to boost their odds of survival.

But whatever practices change this season and beyond, Glacier Country’s residents will always have to accept the risks of fire.

That much was clear to Kildahl as he walked through Kelly’s Camp and found a cast-iron skillet that had been melted by the heat.

“When you have something that ferocious, no planning can obviously stop that.”

The tipping point for Jeff Hainline came when his TV was stolen from his Westside living room as he and his wife slept upstairs, the burglar's…