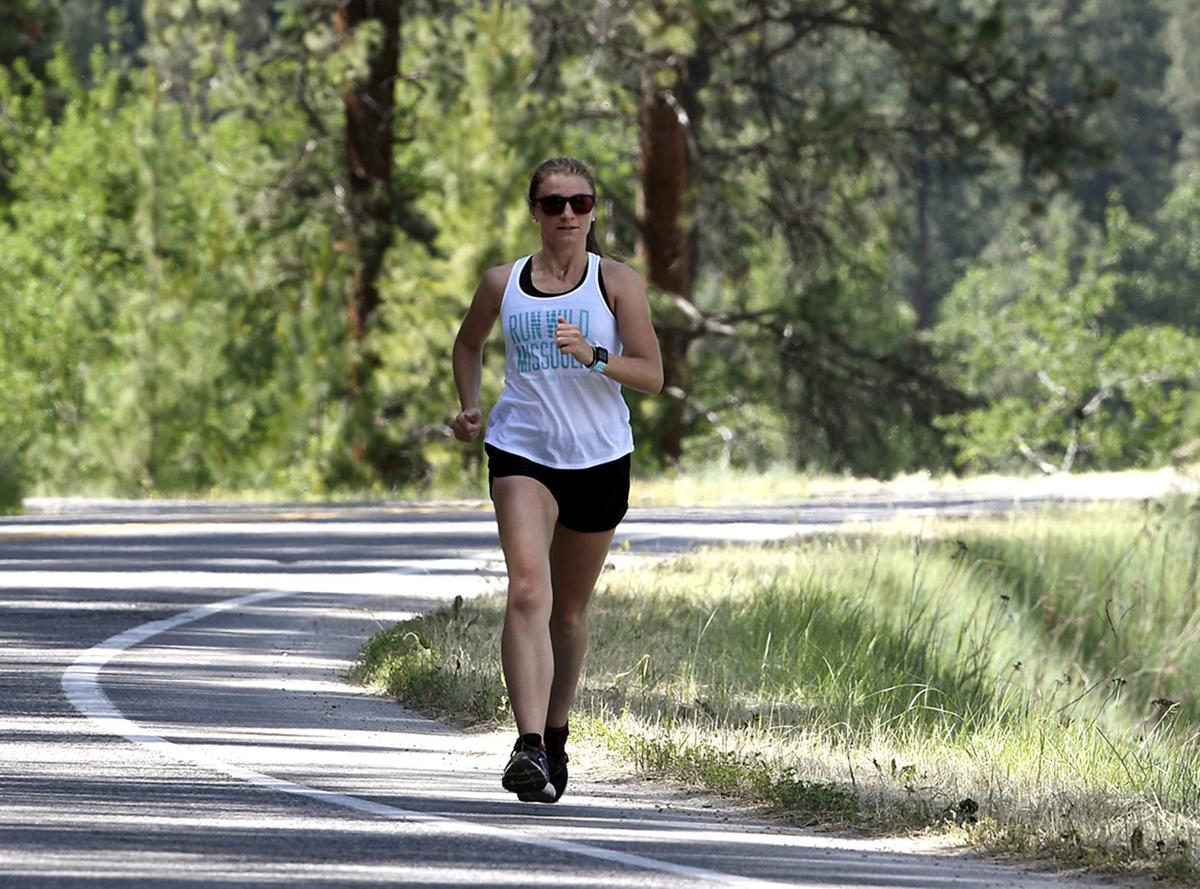 Elizabeth Wasserman runs last week along Big Flat Road, where there should have been thousands of runners on Sunday taking part in the Missoula Marathon were it not for the COVID-19 pandemic. Wasserman is a marathon runner and also program director for Missoula Marathon organizer Run Wild Missoula, and she would have been working the event. "I know it's a very heavy community-oriented event," Wasserman said. "I'm definitely going to miss that." 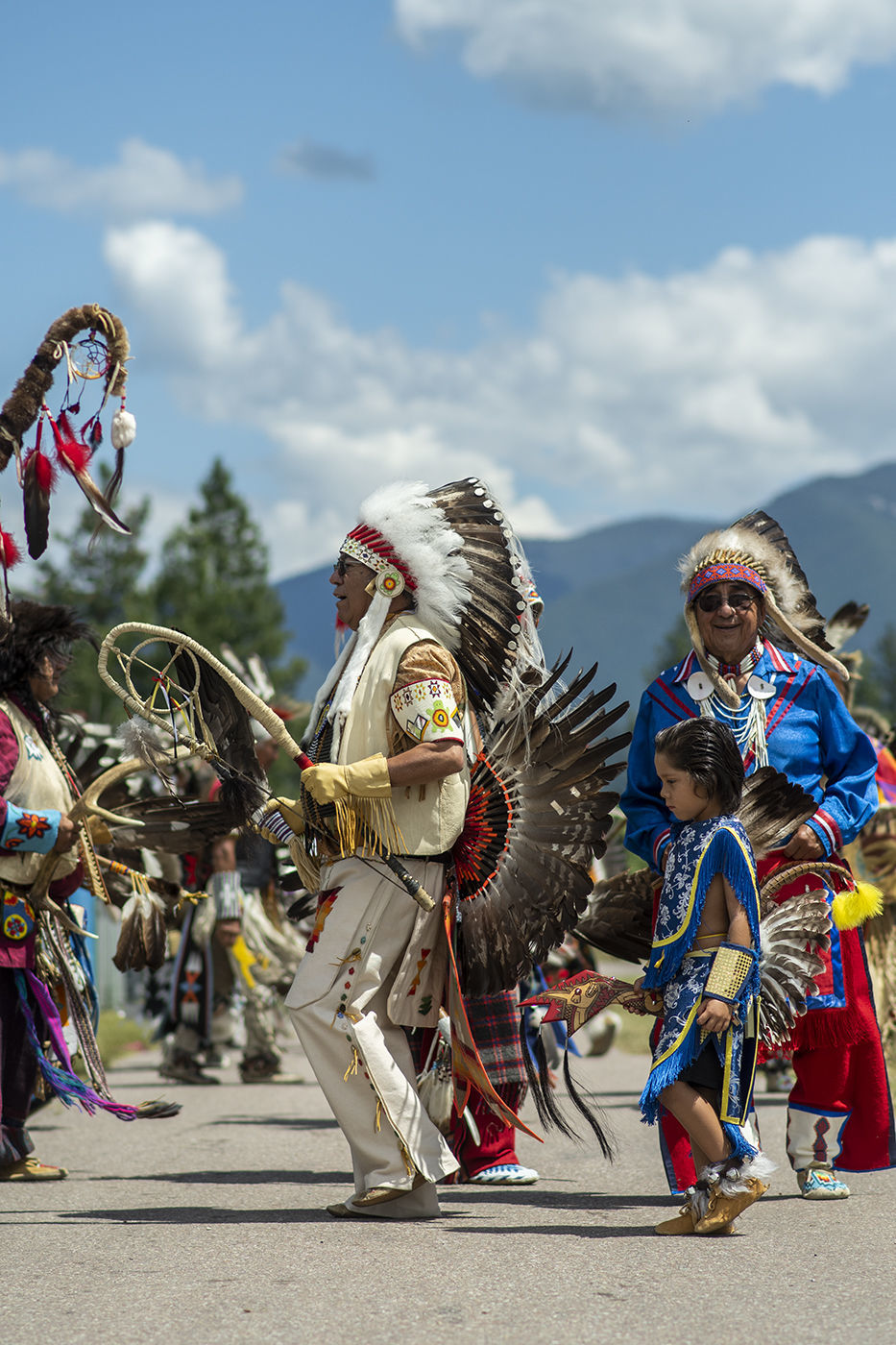 The Arlee Celebration, shown in 2019, won't be happening over the Fourth of July weekend.

The backroads from Frenchtown to Missoula will be eerily normal Sunday morning.

There’ll be no pit-pat of hundreds of running shoes nor cheers and huzzahs from the thousands who would usually flood into town for what would have been the 14th annual Missoula Marathon.

Independence Day parades, rodeos, powwows, concerts, festivals are all vanishing from July like so many altocumulus clouds.

In these parts you won’t see such staples during Fourth of July week as the 121-year-old Arlee Celebration, nee Powwow; the 42nd annual Old-Fashioned Fourth of July celebration at Fort Missoula, and pancake breakfasts and downtown parades in the likes of St. Regis, Polson, Bigfork, Seeley Lake, Condon and probably a dozen other towns.

What will we do without the traditional shower from a firetruck hose in Ovando as the parade makes its first and second loops past the Blackfoot Mercantile and the Stray Bullet?

“Apologies to all, but it was determined that it is better to be safe right now than sorry later. The possibility of even one person getting ill in our community is not acceptable,” Kathy Schoendoerfer wrote on Facebook, voicing concerns of event organizers everywhere in announcing the decision. It came, according to the Seeley Swan Pathfinder, after a 2-1 vote by members of the small Blackfoot Valley community. And it echoed the sentiments of dozens of organizers and programmers around western Montana.

The Drummond PRCA Rodeo would have been next Sunday, but the agonizing decision to halt one of the town’s and Granite County’s biggest summer attractions had to be made.

The same is true for outdoor concerts, from Thursday’s show by 311 at the KettleHouse Amphitheater in Bonner to big-time music events later in July like the Montana Folk Festival in Butte, Under the Big Sky in Whitefish and Red Ants Pants in White Sulphur Springs. Missoula has already called off its River City Roots Festival in late August.

Big Sky Brewing in Missoula has moved all its June-July concerts to 2021. KettleHouse has done or is in the process of doing the same.

“It’s going to be different. This whole year is different,” Racene Friede, president and CEO of Glacier Country Tourism, said this week. “We just have to look at things differently.

“We need to keep practicing safety, kindness, being respectful and being prepared. So much of this is getting back to basics, spending quality time with family and friends. With this being summer in Montana, holy cow, that’s a great thing.”

“I tend to not look at what has been canceled or what I may or may not have lost. I tend to think how better it’s going to be next year,” Danelle Gjetmundsen said.

An office administrator for both the Missoula County Sheriff’s Office and Detention Facility, Gjetmundsen ran in all 13 previous Missoula Marathons. She’s a volunteer coordinator for the run that has garnered national and international fame in its relatively short existence.

And she’s kept her streak alive.

When it canceled, the Missoula Marathon offered a virtual marathon. Pay your fees and run 26.2 miles anywhere in the world, whenever you chose. Gjetmundsen completed hers, on the familiar Frenchtown-to-Higgins Avenue Bridge course, three Saturdays ago.

It was a blessedly cool, sometimes rainy June day, and an altogether different experience plodding alone, she said. Her husband, Elvind, served as a mobile aid station at points along the course.

This week, race organizer Tony Banovich said runners like Gjetmundsen and a variety of community groups had raised some $23,000.

“Each of the cross-country programs at Big Sky, Hellgate and Sentinel High Schools will be awarded $1,000,” a press release from Run Wild Missoula said. “The Missoula Food Bank, Missoula Youth Homes and Opportunity Resources will each receive $5,000. And Run Wild Missoula will retain $5,000 for future 2020 giving opportunities.”

Such make-do has become common throughout the region. When the Seeley Lake Chamber of Commerce realized it couldn’t safely provide its usual Fourth of July parade and fireworks show, Jessica and Jeff Kimmel of the up-lake Tamaracks Resort came up with an alternative.

“Normally in Seeley Lake, 6,000 to 7,000 people show up for the parade,” Ariana Castillon, general manager of the Tamaracks, said. That’s a lot of folks along a one-mile route, and such crowds didn’t pass muster with the health department of Missoula County.

“With social distancing of 6 feet, it was almost impossible to follow the rules,” Castillon said.

So Tamaracks proposed and received approval from the health department and the Forest Service for an alternate Fourth.

A boat parade around the lake for all interested participants begins at 1 p.m. That night, at 10:30 p.m., the Kimmels will put to use training they received last week in Helena to conduct a professional fireworks display from a boat off River Point Campground. The central location should make the bangs, pops and sparkles visible from around the lake, including River Point, Seeley Lake and Big Larch campgrounds.

Some Fourth of July events will go on. Bigfork, while nixing its traditional parade, has received the go-ahead from Flathead County and the Professional Rodeo Cowboys Association to host its third annual PRCA rodeo July 4-6. Lincoln’s two-day Northern Rodeo Association show received the green light from Lewis and Clark County health officials to carry on over the weekend of the Fourth. It was still a go late last week, starting at 1 p.m. The parade at 11 a.m. on Saturday was reportedly canceled last week, but reports on the Lincoln Chamber of Commerce Facebook page on Thursday indicated it was back on. There'll also be fireworks Saturday night in Lincoln.

The Clark Fork Valley Press reported last week that a “No Limits Monster Truck Firecracker Nationals” event is good to go at the Sanders County Fairgrounds in Plains on July 4, with separate events at 1 p.m. and 7 p.m.

At Fort Missoula that same Saturday, where thousands are wont to gather to mark our nation’s birthday, the historical museum will be open. But the idea of a traditional large-scale celebration was put to rest, with regrets, awhile back. Matt Lautzenheiser, executive director of the Historical Museum at Fort Missoula, said the museum will be open for visitors inside and out. But a full-scale, crowd-drawing event isn’t feasible.

Next door there's an itinerary of activities at the Rocky Mountain Museum of Military History, though no food will be offered. A sanitization station will be available, there'll be distance markers for spectators across the length of the museum grounds, and masks will be required inside. Activities will include a traditional flag-raising ceremony and a Revolutionary War-era military camp.

It's not ideal but it's good enough for Francis Weigand of the Sons of the American Revolution, who for the third year has printed up a copy 2 feet wide by 4 feet tall of the U.S. Constitution for visitors to sign under the John Hancocks of the founding fathers.

Friede, from the Glacier Country Tourism bureau, looks at the COVID-19 conundrum this way.

It’s not a No-Fun Fourth for Montana but a Make-Your-Own-Fun Fourth.

“I think people are just doing different things,” she said. “Hey, it’s a back-to-basics Fourth, an old-time Fourth that we spend with family and friends.”

COVID-19 and all it has wrought be damned. We’ll wear our masks and keep our distance, but it’s summertime in Montana.

“Myself, I was planning on this being a summer of concerts,” Friede said. “That has to be retooled. Now I’m looking at biking and hiking and going to the lakes.

“We adapt really well. Montanans know how to change course and still be able to have a good time, and take advantage of this great lifestyle we are afforded on a daily basis.”

"It’s never too late or too far behind to make a change and stand for justice. There’s always time," said Aleathea Standingrock.

Steadily the drops that filled rain gauges Monday helped June, on its penultimate day, live up to its reputation as the wettest month of the year.

The Higgins Block Stair Restoration is gearing up the entrance to one of Missoula's most historic buildings for another 131 years.

Elizabeth Wasserman runs last week along Big Flat Road, where there should have been thousands of runners on Sunday taking part in the Missoula Marathon were it not for the COVID-19 pandemic. Wasserman is a marathon runner and also program director for Missoula Marathon organizer Run Wild Missoula, and she would have been working the event. "I know it's a very heavy community-oriented event," Wasserman said. "I'm definitely going to miss that."

The Arlee Celebration, shown in 2019, won't be happening over the Fourth of July weekend.