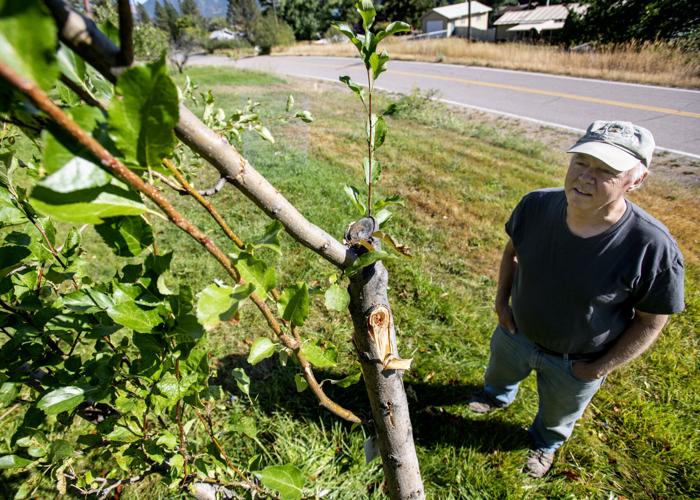 Bob Summerfield, co-owner of the Brovold Community Orchard in Alberton, looks at bear damage to one of the fruit trees on Tuesday afternoon. Summerfield, along with his wife, Jeanne, are urging Alberton community members to bear-proof their properties after black bears were seen climbing trees and eating fruit at the orchard. 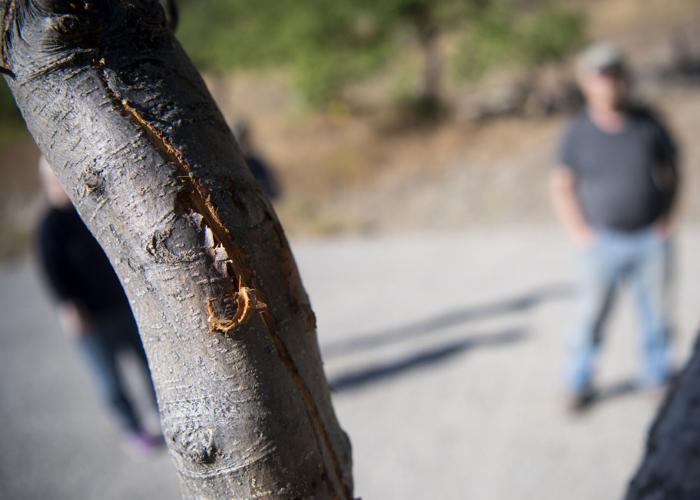 Claw marks from a black bear on one of the orchard trees at Brovold Community Orchard on Tuesday.

ALBERTON — Bob Summerfield likes bears, but he'd prefer that they didn't make a meal out of the fruit trees in his orchard.

That's exactly what happened late last week at the Brovold Community Orchard in Alberton, when a black bear sow and her two cubs feasted on more than a dozen trees and inflicted major damage on many of them. Now, Summerfield and his wife, Jeanne — whose father, Norman Brovold, planted the trees — plan to make the orchard an example of so-called "Bear Smart" methods of reducing human-bear conflict around Alberton.

Bob, 73, is uniquely positioned to manage the hungry bruins: Before he retired from a career as a bear biologist, he worked as the U.S. Forest Service's grizzly bear habitat coordinator for the Lower 48 states.

"I like bears," he said on Tuesday at the apple, plum and pear orchard, which gives away thousands of pounds of fresh fruit annually. Seated in a lawn chair next to Jeanne, he stressed that theirs was not a battle between agriculture and bear. "These bears are just doing what bears do. It's our responsibility to secure attractants, and so that's why we're putting up a fence."

An electrified fence, that is. And it'll take about $2,000 in materials alone to surround the 3-acre orchard about a half-hour west of Missoula. The Summerfields started a GoFundMe online fundraiser to collect money for the expense (gofund.me/75846b23). Volunteer labor, they presume, will get it installed. They hope to have it up by Aug. 1, 2023, before bears enter their annual pre-hibernation gorging, known as hyperphagia.

It might take the community to give the orchard a fence, and Bob and Jeanne hope the effort will give the community something, too: A better idea of how to reduce bear conflict in Alberton.

Jeanne was raised on the orchard and attended school in Alberton. Bob grew up in Virginia and didn't travel west until 1969, when he visited Yellowstone National Park. That was long before the advent of modern bear management and Bear Smart practices, and he recalled spectating as bears picked through the park's open garbage dump.

Accessible garbage and other attractants are a problem in Alberton, Bob said. Bears that raid food sources in Alberton are usually ignored, he said, and they're killed if they become too much of a nuisance.

"Our intent is to set the example here with our orchard for our community," he said, explaining that electrified fencing is a "maintenance headache ... but it's the right thing to do, it's the responsible thing to do."

And it's something he wants to do before more bears, particularly grizzly bears, show up in Alberton looking for easy meals. Bob had no knowledge of grizzlies in Alberton or immediately around the orchard, but he knows they're in the region and have crossed Interstate 90 nearby. He said he wants to make Alberton and the orchard Bear Smart before they show up, because "it's just a matter of time."

Alberton is on the edge of grizzly bears' estimated population distribution around the Northern Continental Divide Recovery Zone, which centers on Glacier National Park. There have been verified sightings in all directions of the town during the past decade. Grizzlies have "more than likely" passed through the area, according to Hilary Cooley, the grizzly bear recovery coordinator for the U.S. Fish and Wildlife Service.

People generally consider black bears to be harmless, Bob said, but "on those rare occasions when something does go south on you, it can be catastrophic."

"It's only prudent to be smart with how you deal with black bears."

This summer, a black bear family began its incursions into the orchard in early August, usually arriving around 8:45 p.m., according to a neighbor who watches the property while the Summerfields are at home in Missoula. But it wasn't until last Friday that the couple arrived to find major damage across the roughly 80-tree grove: At least five trees sustained major damage, with multiple limbs broken off and a distinct risk of dying over the winter. Another 10 had at least a couple limbs snapped.

"The ones that had fruit got hit pretty hard," Bob said, noting that the silver lining of an already poor growing season was that many trees had no fruit to attract bears. "The bears consumed a lot of what was there."

One tree, Bob said, is "on its last leg at this point. There were a couple big limbs ... the bears broke off." Another, he remarked, "wasn't the best tree in the world but they really did a number on it. They took this whole side out."

Surveying deep claw marks and broken branches on a particularly brutalized tree near the orchard's parking area, Jeanne remarked: "I'd be surprised if it makes it."

Bob said he "knew it'd happen someday, it's inevitable." Now that it has, Jeanne said, "We're worried about the mother and her babies. They know now this is where fruit is and next year they'll come back."

"This is a community orchard," Jeanne said of the place that is home to trees named Bob and Stuart — dubbed so last year by Alberton's second-grade class, in homage to characters from the "Minions" kids movie franchise. Bob and Stuart bore the best apples. But Jeanne fretted: "All the lower branches that the kids could reach, the bears broke off."

As a nonprofit, the Brovold Community Orchard is eligible for grant money and matching funds to pay for electric fencing — an avenue the organization is pursuing. But the Summerfields said having the community help pitch in toward fencing keeps in the spirit of a community-centered institution that last year sent more than 3,800 pounds of free, fresh-picked fruit home with more than 300 people from Missoula to Superior. Another 1,000 pounds or more of fruit on the ground was given away to feed livestock. The orchard also hosts educational programs for local schoolchildren, including apple cider-pressing, and offers work for people with developmental disabilities.

"If you get funding from a corporate source, that's great — but it doesn't involve the community," Bob said, adding that even "them verbally giving us their support means as much as writing a check. We'll get as much as we get in that (GoFundMe) account and that'll be great."

Jeanne and Bob turned the orchard into a nonprofit in May 2021. A handful of Alberton locals serve on the board alongside the Summerfields. Bob is the board president. The couple still own their 100 acres, but they lease the 3-acre orchard land to the nonprofit for $1 annually.

Jeanne's grandparents bought the property in Alberton, then a railroad town, in 1952. Back then the plot at the far east end of town played host to a motel of sorts, with about a dozen single-room cabins, two small homes and a bathhouse. Jeanne's parents bought the property in 1966, and the cabins got razed sometime in the '70s. Her father planted the orchard in the early '80s.

Jeanne's father, Norman Brovold, lived through the Great Depression and was shaped by crushing food scarcity and brutal competition between neighbors over tree fruit in his native Wisconsin. Part of his motivation in planting the orchard, the Summerfields said, was to make sure his neighbors in Alberton would be spared that experience. Brovold, who died in May at 93 years old, particularly loved kids and offered tractor rides through his orchard, where local families were free to come and pick fruit. Making the orchard a nonprofit, they said, was "our way of honoring him and his dream for the orchard."

Norman Brovold did not like bears at all. The orchard probably should've been fenced years ago, Bob said, when bears occasionally came through to eat the fruit.

Norman "just shrugged it off and went on," Bob recalled. "He used to curse the bears — a lot."

This year's standouts in Missoula-area conservation work will be honored this week by those who came before them.

Earlier this month, the BLM withdrew 2,688.13 acres of public land in the area from eligibility for new mining claims for 20 years.

Two grizzly bears were killed by wildlife managers near Ovando this week after a series of conflicts with humans across the upper Blackfoot Valley this summer.

A Charlo man has been charged in federal court for allegedly shooting and killing a grizzly bear four years ago.

The Flathead Avalanche Center will be armed with additional crucial data this winter from the heart of the group's largest forecast zone.

A University of Montana graduate is overseeing the district of an Idaho national forest that shares an extensive border with Montana and the Bitterroot National Forest.

Bold and hungry, ‘town bears’ are increasing after poor berry crop in Flathead

Wildlife managers are trying to capture and relocate two grizzly bears in the northern Bitterroot Valley before the bears get into conflict with humans.

The megafire has scorched more than 130,000 acres so far and three people have died during firefighting efforts.

Referendum on Russia: Kyiv and Western allies call the vote a 'sham'

Sugar overdose? New survey predicts how big candy sales will be in 2022

Sugar overdose? New survey predicts how big candy sales will be in 2022

Bob Summerfield, co-owner of the Brovold Community Orchard in Alberton, looks at bear damage to one of the fruit trees on Tuesday afternoon. Summerfield, along with his wife, Jeanne, are urging Alberton community members to bear-proof their properties after black bears were seen climbing trees and eating fruit at the orchard.

Claw marks from a black bear on one of the orchard trees at Brovold Community Orchard on Tuesday.