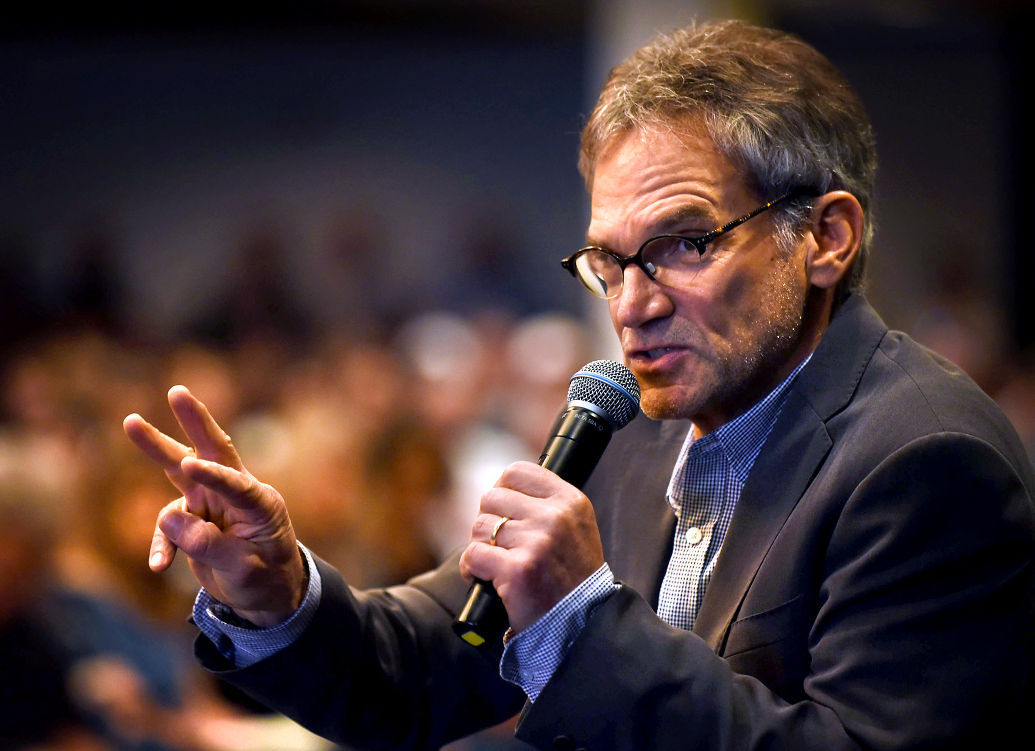 "I wanted to tell the story of acquaintance rape from the victim's point of view," said writer Jon Krakauer of his new book "Missoula: Rape and the Justice System in a College Town." Krakauer answered questions from Larry Abramson, dean of the University of Montana School of Journalism, in front of a packed house at the DoubleTree Hotel ballroom in Missoula on Tuesday night. 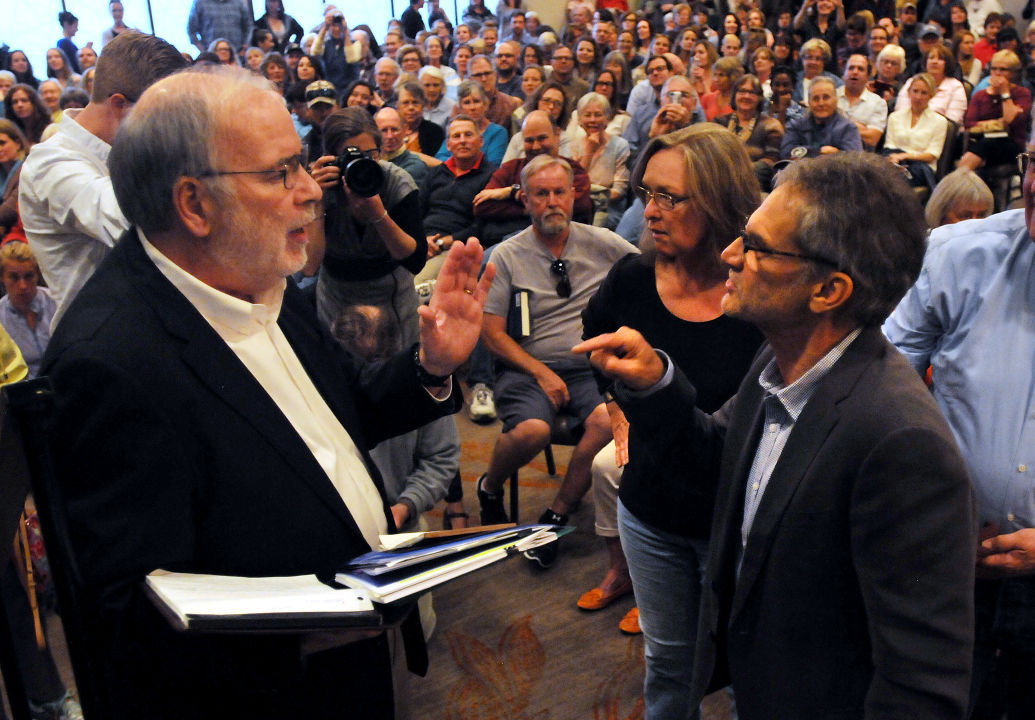 A man who introduced himself as Thomas Dove, left, got into a heated exchange with Krakauer at the end of the interview. 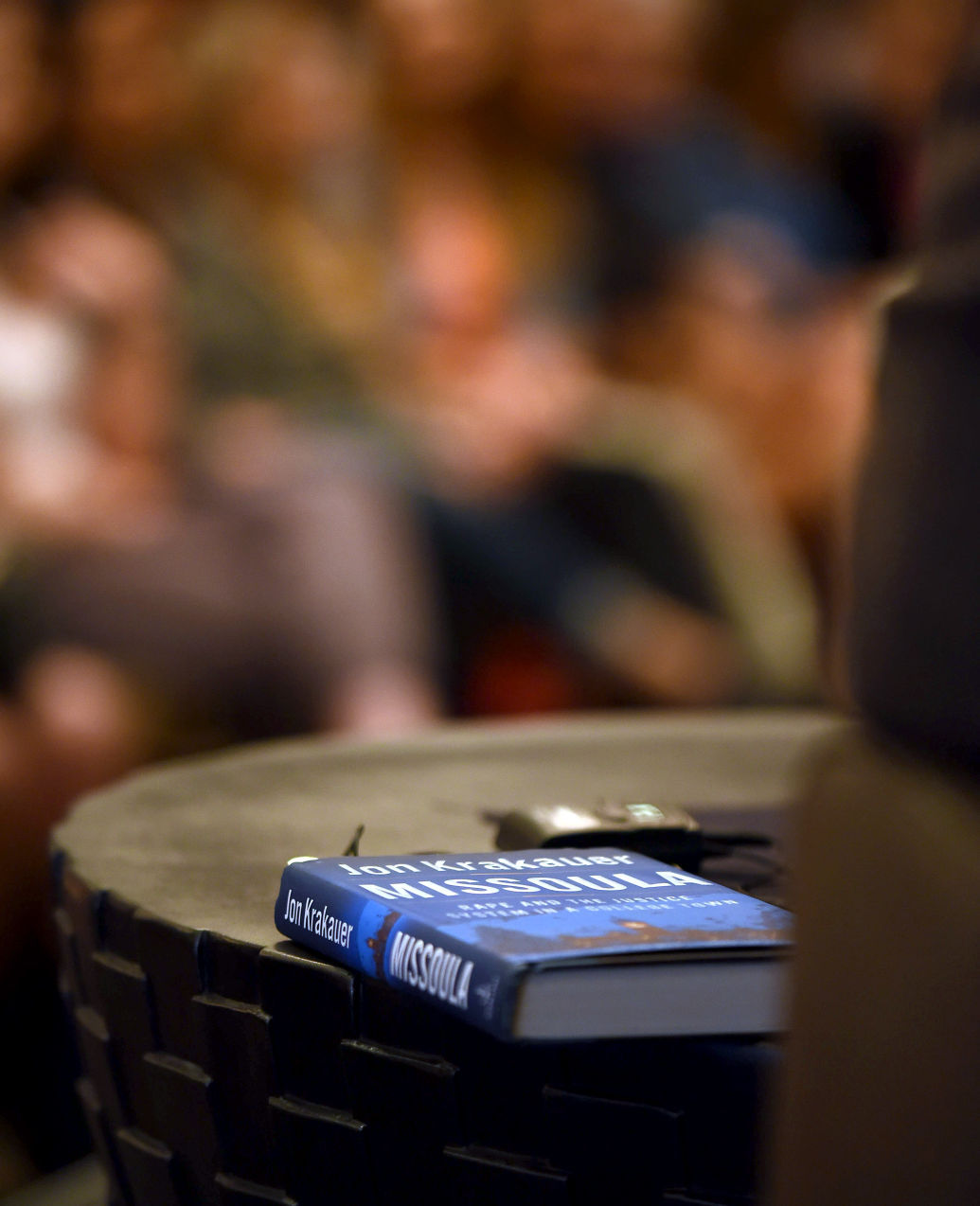 It seemed that most of the crowd was appreciative of Krakauer's book, giving him a standing ovation at the beginning and end of the talk. 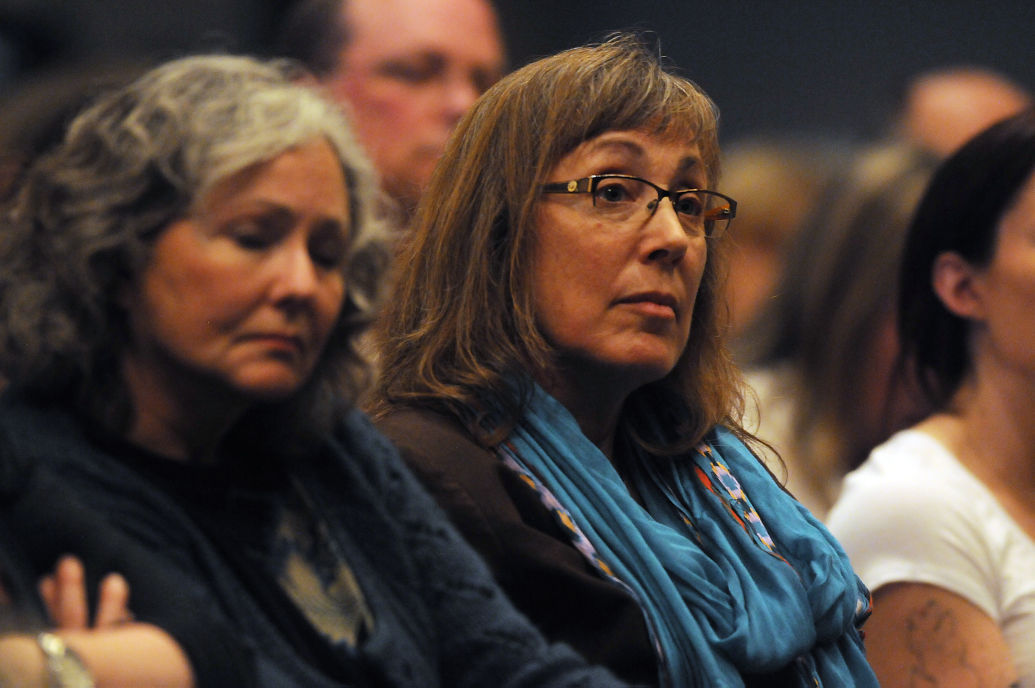 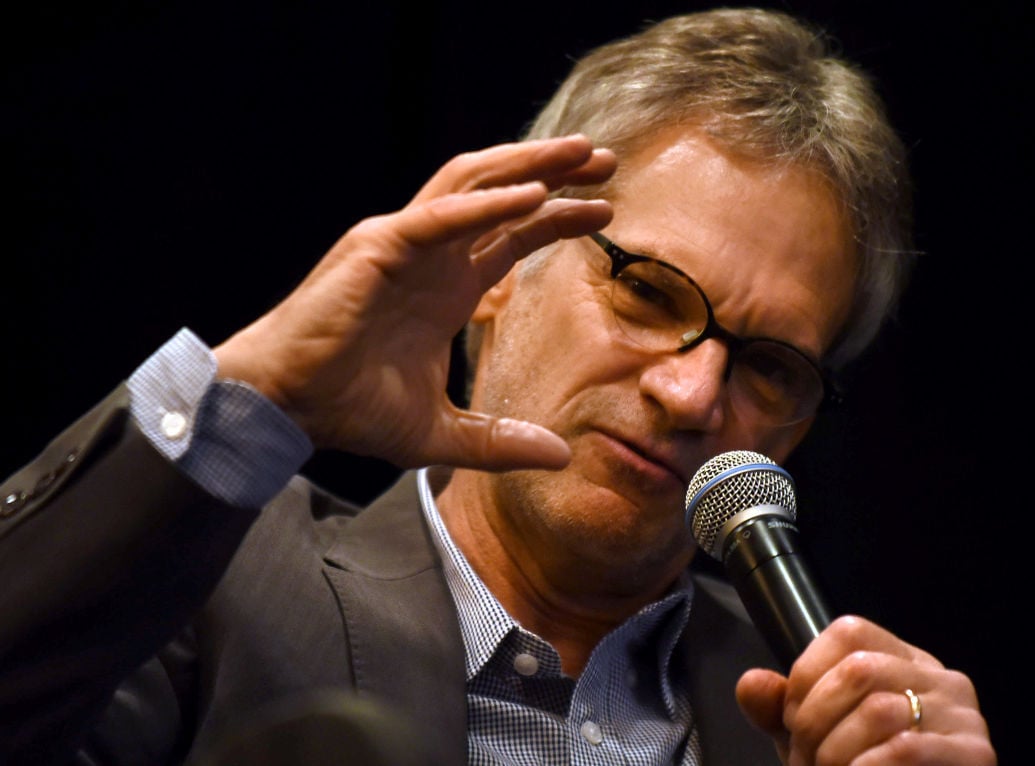 "For every one of those guys, though, there's at least 100 women who were raped, and their rapist walked away laughing," said the best-selling author and investigative journalist.

Krakauer made the statement Wednesday night during a discussion about his most recent book, "Missoula: Rape and the Justice System in a College Town."

Fact and Fiction organized the community forum, which packed Missoula's DoubleTree ballroom with a capacity crowd of 600.

The audience gave the author a standing ovation even before he took questions from moderator Larry Abramson, dean of the University of Montana School of Journalism.

The crowd periodically cheered and clapped in response to Krakauer's statements, and booed a man who monopolized the microphone at the end of the hour with a diatribe but no question.

At the forum, Krakauer defended his journalistic choices in the book about acquaintance rape and detailing cases in Missoula from 2010 to 2012. He discussed his view of prosecuting sexual assault, and he talked about editorial choices he made to limit the focus of the book.

Krakauer said he made a conscious decision to not mention "rape culture" and omit any discussion of drinking, which is a problem. He did so in order to keep the attention on rape victims.

"I wanted to tell the story of acquaintance rape from the victim's point of view. That seemed to be what was lacking," Krakauer said.

One problem when prosecutors decide a case is too difficult to take on is the victim gets left out of the picture and her credibility is undermined, Krakauer said. He agreed the justice system should not convict a man falsely accused of rape.

However, Krakauer said the number of false rape accusations are minimal compared to the number of victims whose cases get ignored.

"She's being falsely accused of being a liar, and that's at least as damaging," Krakauer said.

The author used the case against former UM Grizzlies quarterback Jordan Johnson as an example. He said he understands the reason the Missoula District Court jury found Johnson not guilty of sexual intercourse without consent.

One reason was the lawyers who represented Johnson, David Paoli and Kirsten Pabst, now the Missoula County attorney, mounted a "really aggressive" and "not entirely honest" defense, Krakauer said. A juror told him she believed Johnson raped the woman, but she and other jurors also had doubts.

"The burden of proof for criminal cases is really high," Krakauer said.

But just because a man is found not guilty of rape doesn't mean he's innocent, he said.

"I want people to look at the evidence and understand that just because a guy was found not guilty of rape doesn't mean the victim lied," said Krakauer.

At the same time, he said, he believes the cases of acquaintance rape in his book demonstrated probable cause, even in incidents where the prosecutor didn't file charges.

In his questions, Abramson pressed Krakauer on the reasons he didn't interview some main players identified in the book.

In some cases, Krakauer said, officials stonewalled him. In other cases, people threatened to sue him, and some didn't have a perspective he wanted to hear.

For instance, the author is seeking in a lawsuit information about how and why Johnson's expulsion from UM was reversed. A district court judge ordered the university to give Krakauer the documents he requested, but the university is hiding behind a privacy law and appealed to the Montana Supreme Court, he said.

So Krakauer didn't see the point in having a conversation with a UM spokesperson, and he paraphrased the absurdity that would result: "Let us tell you all the great things we've done to improve the thing we're not going to tell you about."

At the same time, though, Krakauer said he gives UM credit in the book for improvements it has made.

In the interview, Abramson said many victims have published books about rape before: "Is it ironic or strange that you come along, a guy, and you write a book, and suddenly it seems to be getting an inordinate amount of attention. Does that make you feel uncomfortable?"

Krakauer said he's talked to feminists who are angry about that fact, but he had no control over the attention, and he's glad it's in the limelight, at least for now. He also said the lack of attention on other books is unfortunate.

In his talk, Krakauer also praised women who are speaking out, using their real names and refusing to bear shame. He also lauded former Missoulian reporter Gwen Florio, who first reported the rapes included in his book; Florio now teaches journalism at UM.

After the interview, a man who introduced himself as Thomas Dove took the mic and began giving his background. Krakauer requested the man ask his question.

I applaud Jon Krakauer for writing the book, "Missoula," and for his powerful, clear voice bringing both compassion and knowledge to the immen…

Rape must be prosecuted correctly

Jon Krakauer's request to obtain the records of a Montana quarterback accused of rape will go one more round in the Montana Supreme Court.

The University of Montana Police Department is the second Missoula organization to fully implement an agreement with the U.S. Department of Ju…

A former Montana Grizzlies quarterback's claim to privacy had ended by the time Jon Krakauer asked for his discipline records, the best-sellin…

A standing-room-only, diverse crowd of more than 600 showed up to listen to an interview of Jon Krakauer by University of Montana School of Jo…

Jon Krakauer’s new book, “Missoula: Rape and the Justice System in a College Town,” has put the city in the national spotlight and once again …

In 18 years, retired Dean of Students Charles Couture only saw one prosecutor or law officer testify as a witness at a University of Montana s…

As a first-year player in any league, you can't make the team if you can't practice.

With at least 15 staff standing around her in support, Missoula County Attorney Kirsten Pabst delivered a lengthy public statement Wednesday i…

Lin Bateman and her husband had received death threats, and the victim of stalking and other crimes said she has Kirsten Pabst to thank for ke…

Tuesday's release of best-selling author Jon Krakauer's latest project, "Missoula: Rape and the Justice System in a College Town," had many locals anxious if not uneasy. Not among them was University of Montana athletic director Kent Haslam, who called the latest account of several highly publicized sexual assault allegations against UM football players in 2012 and 2013 an "opportunity" not to be shied away from.

Pabst made last-ditch effort to delay publication of 'Missoula'

Alleging "actionable libel" against "several young men" and damage to her own character, Missoula County Attorney Kirsten Pabst made a last-di…

It's good news for the Missoula Police Department, but it won't sound like it at first.

Krakauer discusses 'Missoula: Rape and the Justice System in a Small Town'

Jon Krakauer has files about rape cases in some 30 different cities in the U.S.

Jon Krakauer has "no doubt" rape victims in Missoula will be served poorly with Kirsten Pabst as the Missoula County attorney. On Tuesday, Doubleday will release the bestselling author's book called "Missoula: Rape and the Justice System in a College Town." In the book, women tell stories of being raped by acquaintances and failed by the justice system in cases from 2010 to 2012.

Writer Jon Krakauer sat for an interview before a packed house at the Missoula Double Tree Hotel ballroom Tuesday night in Missoula. The autho…

"I wanted to tell the story of acquaintance rape from the victim's point of view," said writer Jon Krakauer of his new book "Missoula: Rape and the Justice System in a College Town." Krakauer answered questions from Larry Abramson, dean of the University of Montana School of Journalism, in front of a packed house at the DoubleTree Hotel ballroom in Missoula on Tuesday night.

A man who introduced himself as Thomas Dove, left, got into a heated exchange with Krakauer at the end of the interview.

It seemed that most of the crowd was appreciative of Krakauer's book, giving him a standing ovation at the beginning and end of the talk.