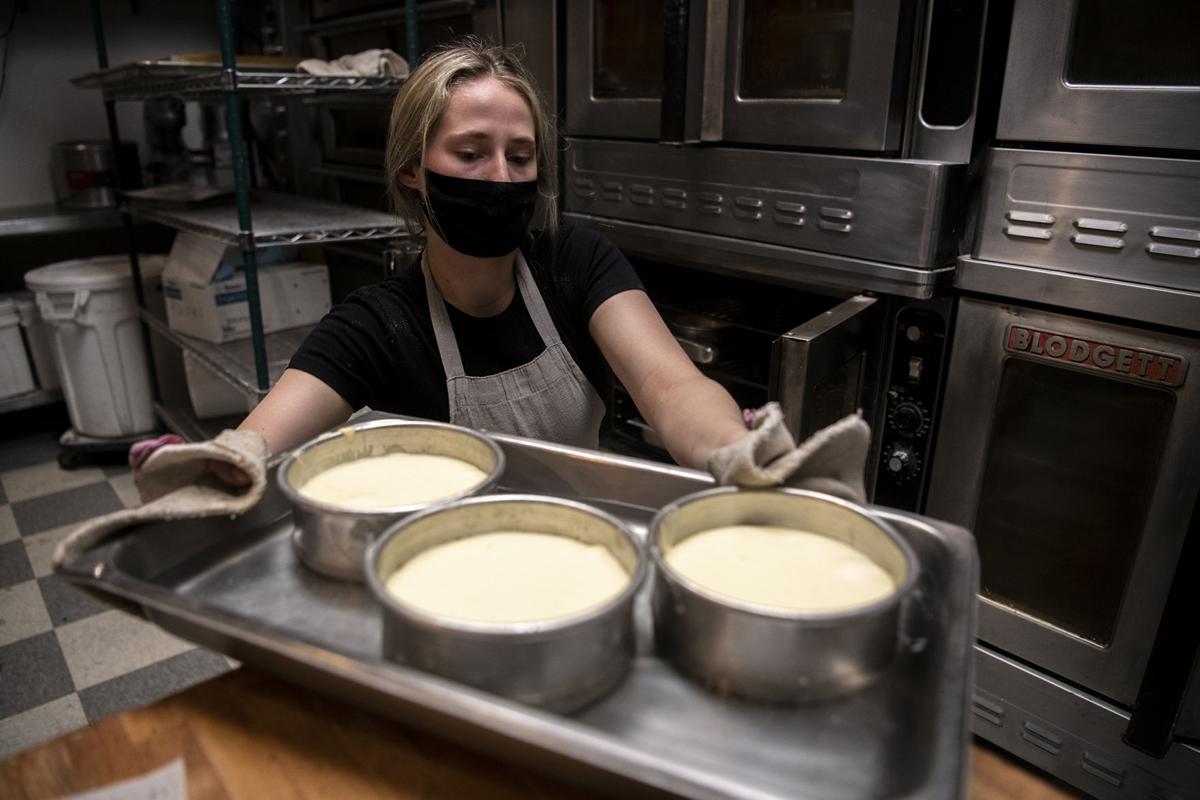 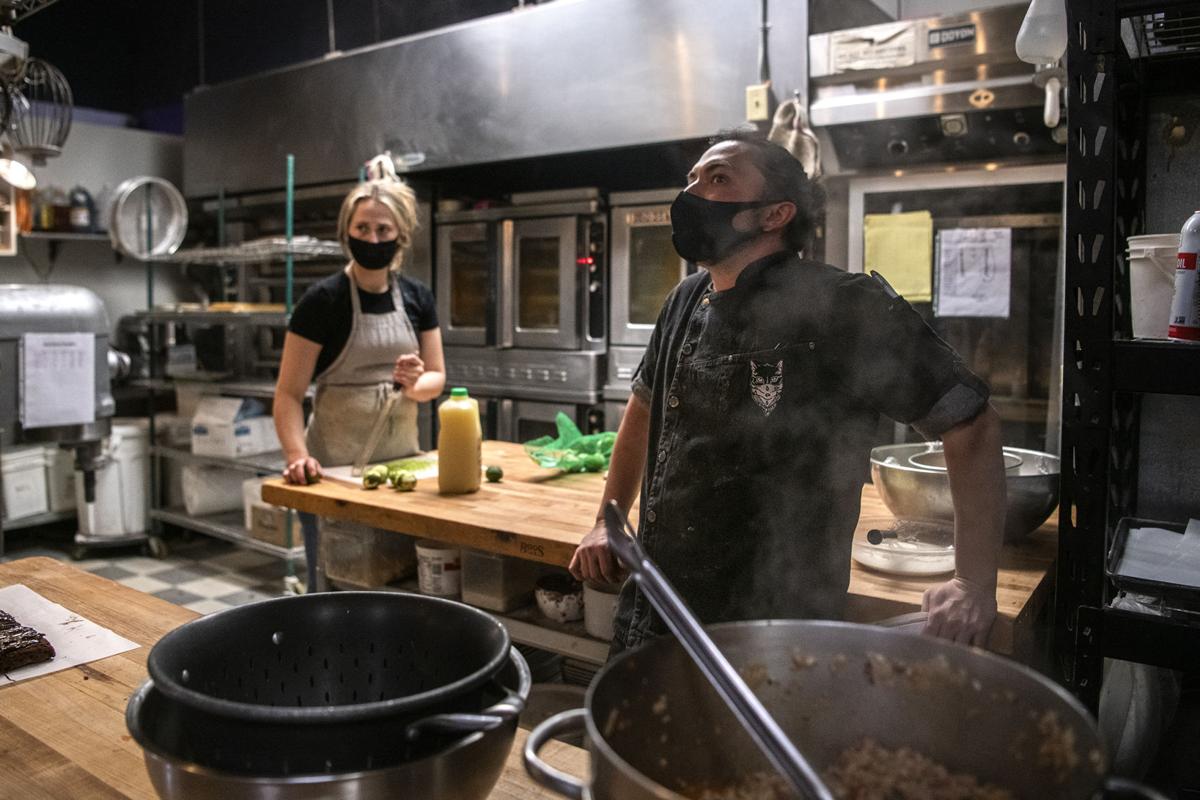 Emma Honn, left, and Justin Philalack are two of Black Cat's 12 to 13 workers. The shop typically employs 20 to 25 people. 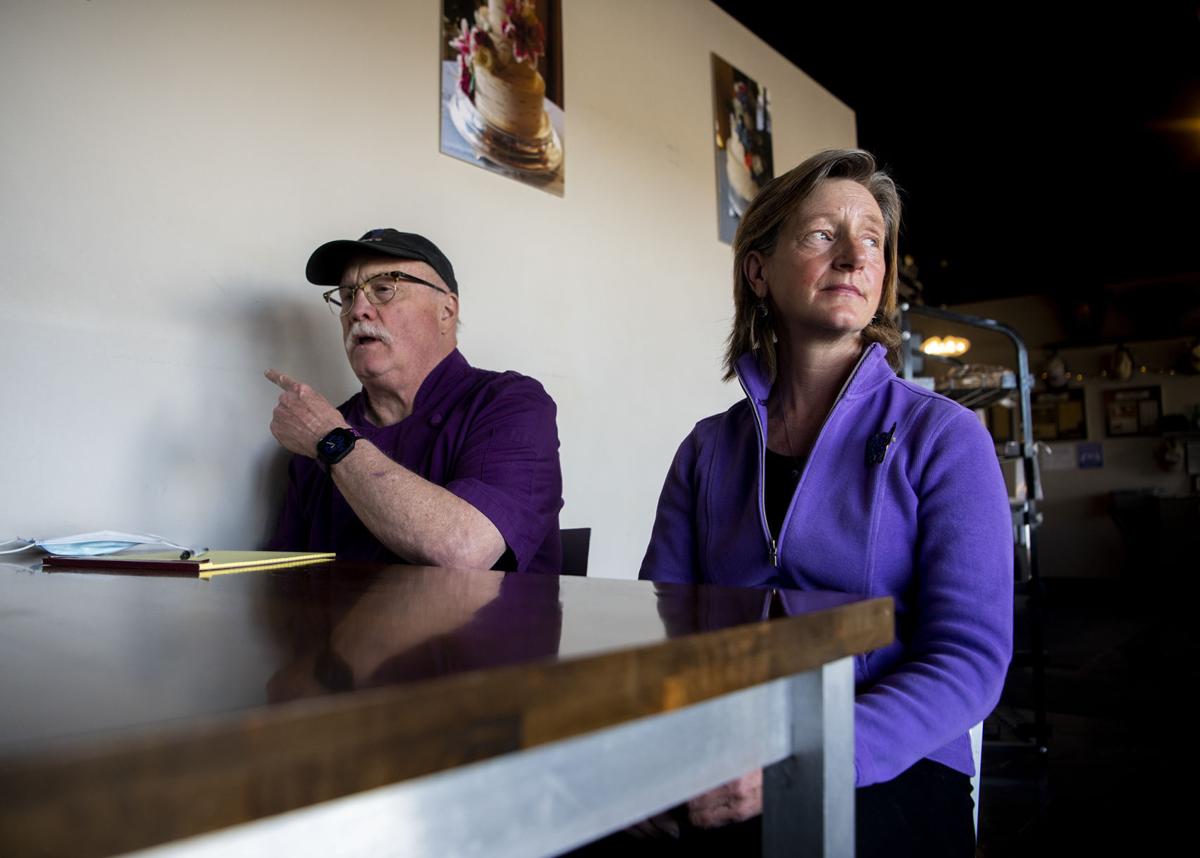 Owners Jack and Christy Wich said there have been multiple no-shows for both interviews and first shifts over the past few months.

Jack and Christy Wich are desperate to give people jobs, but they can't find anyone willing to take them.

The longtime owners of Black Cat Bake Shop in Missoula say small businesses are struggling to fill open positions right now as the economy heats up, but the available labor pool is still relatively small.

"We have four positions open," Christy explained. "One is for a barista. We've gotten maybe three to four applications for that job, when we would usually get 20-25. We have three back-of-house positions and we've gotten no applications."

They're trying to ramp their business back up to meet demand as customers feel more comfortable going out, but they can't keep the bread shelves stocked without an overnight baker.

Jack said he's working six days a week, 10 hours a day just to keep up, even though he's still got severe long-haul symptoms from contracting COVID-19 months ago.

"Business is picking up all over and we can't hire anybody," he said. "Really, we're getting no applicants or they make an appointment for the interview and then they never show up. Or they show up and you hire them, and they don't show up for the first day of work."

Jack has talked to business owners all over Missoula who feel the same way, he said. The bake shop is offering $10.50 an hour to start for some of the positions, with an extra dollar for overnight shifts, but employees also all share tips from the front of the house so the pay is quite a bit more than that.

To offer higher pay, the couple would have to raise the prices on their products, but customers aren't willing to pay an extra $1 for a pastry that they've always had for $3.75. The profit margins in their business are razor-thin.

"We can't pay what contractors pay, like $30 an hour," Jack said. "We're never gonna be able to pay that. We make cookies and muffins. So it takes a lot of $1.50 cookies to make up the wages. So we kinda have that ceiling where people don't wanna pay, you know, $5 for a cinnamon roll. They'll pay $2.50, but not $5. So we have that downward pressure all the time."

They've increased pay as much as they can.

"Even with increased pay, we still can't get anybody," he said.

Christy also believes that people are choosing to remain on unemployment rather than enter the workforce.

"Some other employers I've talked to feel the same way," she said. "The enhanced unemployment the government put out was wonderful for a lot of people, but at this point they don't have to go out and actively look for work. And that goes through September, so that's going to mean a tough summer for us."

Jack said one person to whom they offered a job told them he needed to "check the status" of his unemployment, and they never heard from him again.

They've had to reduce the hours and days that they're open due to staffing issues. Right now, they've got around half of the roughly 25 employees they had pre-pandemic. Their bread rack and pastry case, usually overflowing, are relatively meager these days because they just don't have enough workers, even though they've advertised nationally.

And customers just keep coming in wanting more product every day. On Tuesday, the lunch rush was as hectic as ever, with the few remaining employees hustling to do multiple jobs at once.

A report in August of 2020 from the National Bureau of Economic Research found that enhanced unemployment insurance benefits didn't necessarily keep people from entering the workforce, but it did show that workers were able to seek jobs that better fit their education and skills. A U.S. Census survey in March found that 4.2 million Americans aren't working because of fear of the coronavirus.

Missoula's unemployment rate is 4.9%, which is far above where it stood in December of 2019 at 3.7%, according to the Montana Department of Labor and Industry. As recently as September 2018, the unemployment rate in Missoula was at 2.9%.

Karen Byrne and her husband, Barrett Byrne, own Rattlesnake Market and Cafe in Missoula. When asked if she had trouble finding help, Karen told the Missoulian she couldn't speak at the moment — she was too busy helping customers because she's short on staff.

Barrett eventually called back to confirm that situation.

"We are seeing a lot fewer applicants than we have in the past," he said. "We have a very good core staff that have been with us throughout the whole pandemic. We didn't lay anybody off, but we had some attrition where people who were students moved on."

Business has steadily increased the last two months, so they need help, he said. They've also had trouble with applicants committing to taking the job once it's offered.

"The quantity of applications is not there and we're probably not getting as many qualified people as in the past," he said. "Every business is gearing up, so it's going to be a challenge. We're a very labor-intensive business."

Rattlesnake pays "well above" minimum wage and offers discounts and other benefits, along with predictable scheduling for people who need to balance work and home life, he said. To fill positions, they'll have to look toward a younger pool of applicants.

"They will support the core group of staff we have in existence," he said. "Expectations will be high on them. If they apply for a summer job, that means they'll be available for the summer. It's kind of life lessons that will be exposed to younger workers. We're trying to get creative."

Charlie Scheel, a manager at Great Harvest Bread Co. in Missoula, said they've had to close on Mondays because of a lack of staff. He recently hired two people, but he's still looking for one more.

With tips, workers there can expect to earn an extra $2-$3 per hour on top of the $10 per hour base pay, Scheel said. Before the pandemic they were making an extra $4-$5 with tips.

"We've always just relied on people coming in the door and seeing the sign for open jobs," he said. "But we've only gotten one application from someone who came in and picked up an application."

Jack Wich said every business owner is telling him the same story about not having enough applicants.

"It's always the exact same thing," he said. "It's frustrating."

Marshall Mountain, which was once a commercial ski area just outside of Missoula, is under contract to be sold.

"People call me a 'Debbie Downer' because I tend to be pessimistic," said a Missoula hospital chief executive. "I just don't want to set our expectations too soon because the unknowns continue."

After a COVID outbreak at a Missoula hospital, nurses who've been denied hazard pay during the pandemic say they're burnt out, frustrated and overwhelmed by watching people die alone.

"My wife Megan and I are looking into securing a food trailer in which to prepare and serve up some delicious Pakistani food to tantalize your taste buds and keep you coming back for more," said Zohair Bajwa.

No one was hurt as a result of the fire.

Montana added 194 new cases of COVID-19 on Wednesday, while more than 258,000 residents are considered fully immunized from the virus.

Montana added 194 new cases of COVID-19 on Thursday, and two more residents have died due to the virus.

The workers are continuing to protest despite losing their jobs.

"It's happening under the radar. A lot of those are cash transactions. So (apartments) that people have been living in affordably are going to get bought up."

A new place to get specialty foods from all over the world has opened near Southgate Mall in Missoula. Also, the Downtown Missoula Partnership is resuming history tours.

One homeless man said the Temporary Safe Outdoor Space has been a "Godsend" to himself and his wife.

Emma Honn, left, and Justin Philalack are two of Black Cat's 12 to 13 workers. The shop typically employs 20 to 25 people.

Owners Jack and Christy Wich said there have been multiple no-shows for both interviews and first shifts over the past few months.