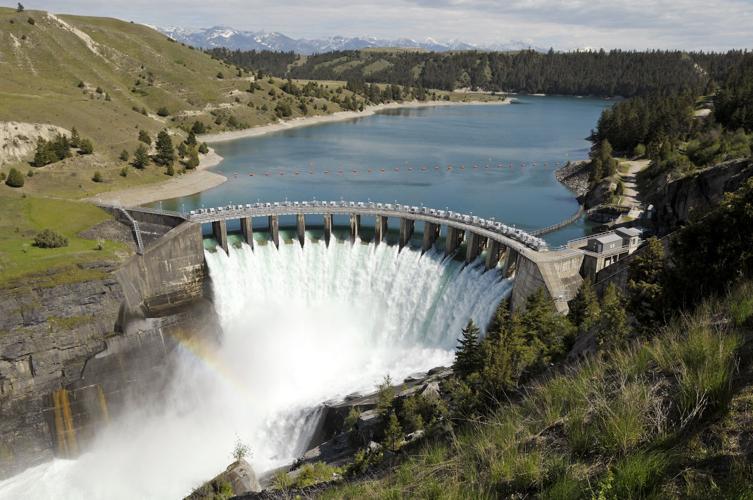 Water spills over Kerr Dam in May of 2011, when regulators kept the gates open to prepare for a heavy spring runoff that would fill Flathead Lake. 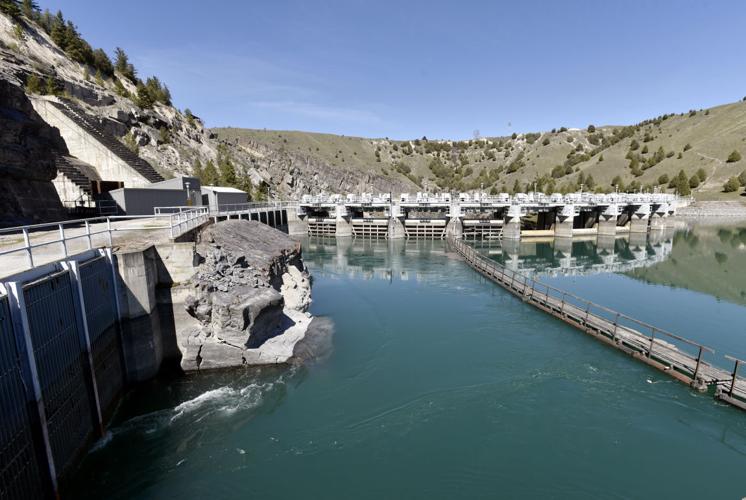 Flathead Lake backs up behind Kerr Dam, which was completed in 1938. 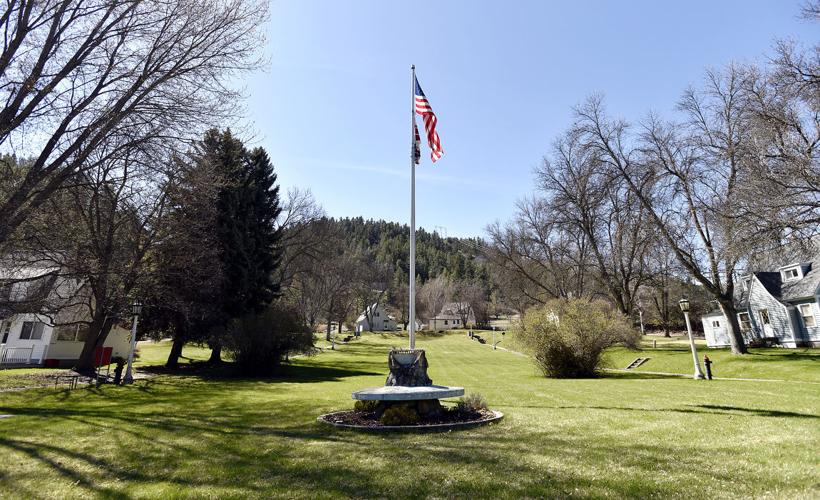 The small village of half a dozen homes below the powerhouse historically were provided to dam employees and their families. Only one operator lives there full-time, and Energy Keepers may turn some of the houses into office space.

POLSON – A Montana state senator and a former state legislator on Thursday asked a federal judge to stop the Confederated Salish and Kootenai Tribes from taking ownership of Kerr Dam this weekend.

The tribes are scheduled to become the first Indian tribes in America to own a major hydroelectric facility on Saturday.

Their attorney, Lawrence Kogan of New York City, told the Missoulian that national security issues involving the dam’s transfer have not been properly addressed by the federal government.

Court documents filed by Kogan suggest the nation of Turkey has sought to invest in Native American tribes because the 2009 Homeless Emergency Assistance and Rapid Transition to Housing Act makes Indian reservations “largely off-limits to federal and state regulatory and law enforcement authorities.”

“It would appear that this setting would provide Turkey and such organizations with the opportunity to more freely promote their brand of Islam on reservations and/or to pursue other potentially more dangerous activities,” the complaint states.

That includes the possibility that Turkey seeks “access to the uranium deposits and bountiful water sources surrounding the Flathead Reservation for production of yellowcake capable of later conversion to a gaseous state for eventual use in incendiary devices,” it goes on.

The complaint asks a judge to issue an emergency temporary restraining order and temporary injunction prohibiting the Federal Energy Regulatory Commission from conveying the dam to the tribes.

Kogan said a hearing is set for Friday afternoon in U.S. District Court in Washington, D.C.

“The tribes are surprised at this lawsuit, considering that we have fulfilled all requirements to satisfy a 30-year-old contract,” CSKT spokesman Rob McDonald said after news of the complaint broke less than 48 hours before the tribes are scheduled to hold a celebration of their acquisition of the dam Saturday at Salish Kootenai College.

“The Kerr license was finalized in 1985, with the tribes as co-licensee,” McDonald went on. “Our legal team is still going through the lawsuit to understand clearly what is being alleged. Energy Keepers (the tribally owned corporation that will operate the dam) will continue to work diligently with all involved parties during these last days of transferring the Kerr hydroelectric facility to CSKT.”

Keenan and Jackson’s 54-page complaint also alleges that FERC improperly “rubber-stamped” changes made by the Department of Interior to the 1985 agreement that launched CSKT down the path to potential ownership of the dam.

The scheduled conveyance of the Kerr Hydroelectric Project to the tribes on Saturday “is an indispensable element” of an “overall long-term political strategy to restore to the tribes their pre-Hellgate Treaty of 1855 on and off-reservation waters and lands,” the complaint says.

It maintains the Department of Interior, FERC and CSKT are behind the alleged strategy, and if the tribes take over Saturday, it will “for all intents and purposes … ensure the CSKT’s ownership, management and control of ALL 12 dams and reservoirs on the Flathead Reservation, at the expense of the reservation’s irrigation community.”

“The scheduled … conveyance of the Kerr Project and license, however, is a legally flawed conveyance that does not comply with various substantive and procedural federal regulatory and constitutional requirements,” the complaint goes on.

Norman Bay, chairman of the Federal Energy Regulatory Commission, is scheduled to attend Saturday’s celebration at the Joe McDonald Health and Fitness Center on the SKC campus in Pablo.

Bay is named as the lead defendant in the lawsuit. Other defendants include the other four FERC commissioners, Interior Secretary Sally Jewell, Assistant Secretary of Indian Affairs Kevin Washburn, and U.S. Fish and Wildlife director Dan Ashe.

The complaint alleges that the transfer of the dam “consummates a long interconnected series of incremental steps defendants have executed in coordinated fashion since 1985” to gain control of Kerr Dam, “at the expense of irrigators living on the Flathead Indian Reservation, and businesses and recreationalists living off of said reservation.”

Keenan, owner of the Bigfork Inn, is a state senator who unsuccessfully challenged incumbent Conrad Burns for the Republican nomination to the U.S. Senate in 2006, and was Corey Stapleton’s running mate in the 2012 GOP gubernatorial primary when Rick Hill and Jon Sonju won the nomination.

Jackson was a long-term Kalispell-area legislator in the Montana House and Senate, and is currently supervisor of the Flathead Conservation District.

Also listed as a plaintiff is Pointer Enterprises of Bigfork, which operates scenic cruises on Flathead Lake and “has long sought to secure information from FERC concerning agency determinations regarding management of lake levels and river flow rates, and the conveyance of the Kerr Project …,” Kogan’s document says.

In his statement, McDonald, the CSKT spokesman, said that “Energy Keepers, the tribal entity charged with securing the purchase and operation of the dam, wants to assure everyone that the highest safety measures have been taken during the transfer process.”

'We are ready for this': Tribes move ahead as judge denies restraining order

POLSON – The Confederated Salish and Kootenai Tribes paid NorthWestern Energy $18.2 million for Kerr Dam on Thursday, and a federal judge on F…

HELENA (AP) – A former state senator has entered the race to become Montana's next secretary of state.

U.S. attorneys are requesting a federal judge dismiss a lawsuit that attempted to block the transfer of Kerr Dam to the Confederated Salish an…

Tribes still mulling whether, how much to offset $1M in lost tax revenues from Kerr Dam

POLSON – As the Confederated Salish and Kootenai Tribes prepare for their historic takeover of Kerr Dam on Saturday, local officials are still…

Tribes get ready to celebrate their takeover of Kerr Dam

PABLO – The Indian tribes that once opposed the construction of Kerr Dam will celebrate their acquisition of it over Labor Day weekend.

Three years ago, Energy Keepers, Inc., the federally chartered corporation of the Confederated Salish and Kootenai Tribes, was created to mana…

POLSON – On a picture-perfect Friday afternoon overlooking Flathead Lake, boats could be seen in the distance cutting wakes through Polson Bay and The Narrows. Their props and keels have been several inches closer to underwater rock hazards for much of this summer, and the vessels sit lower than usual at docks.

POLSON – Tens of thousands of days – a lifetime’s worth – will stretch between two historic moments on the Flathead Indian Reservation.

Biden says US would defend Taiwan if China invaded

Biden says US would defend Taiwan if China invaded

Water spills over Kerr Dam in May of 2011, when regulators kept the gates open to prepare for a heavy spring runoff that would fill Flathead Lake.

Flathead Lake backs up behind Kerr Dam, which was completed in 1938.

The small village of half a dozen homes below the powerhouse historically were provided to dam employees and their families. Only one operator lives there full-time, and Energy Keepers may turn some of the houses into office space.