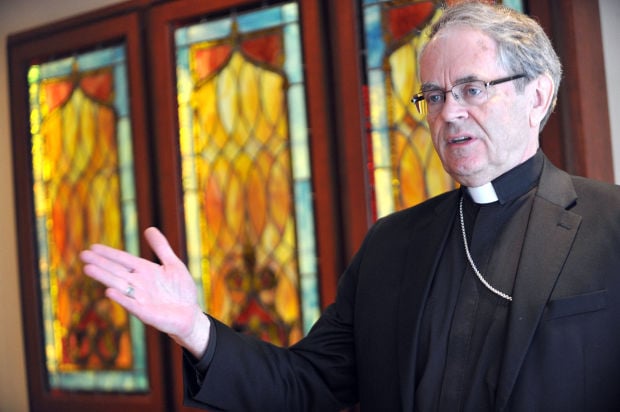 Bishop George L. Thomas speaks at a news conference Friday Jan. 31, 2014, in Helena, Mont., about steps the Diocese of Helena has taken toward bringing resolution to claims of abuse by filing for Chapter 11 bankruptcy. 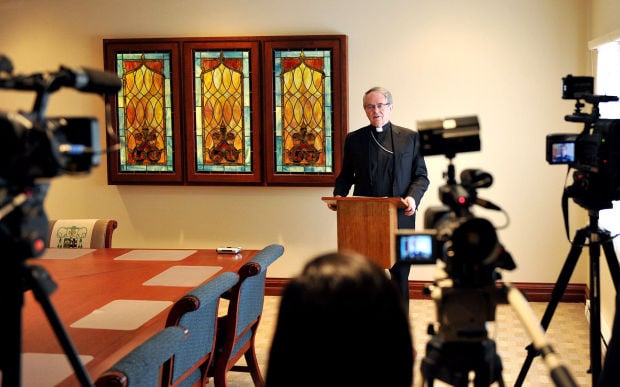 Bishop George L. Thomas fields questions from media Friday Jan. 31, 2014, in Helena, Mont., as he unveils the outline of settlement arrangements with abuse victims. "I want to assure you that none of those who have been credibly accused remain active in ministry at this time," Thomas said. "In fact, a majority of those accused have died."

Lawyers representing victims of sexual assault that allegedly occurred for more than 40 years at the Ursuline Academy in St. Ignatius are pledging to take the case to trial this summer – even after the Catholic Diocese of Helena filed for bankruptcy Friday to settle a similar lawsuit.

The case against the Ursuline Sisters of the Western Province alleges that 10 nuns sexually abused Native American children at the Catholic boarding school from the 1930s to the 1970s, and lists 37 men and women as the victims of sexual molestation.

The lead counsel in the case, Blaine Tamaki of the Tamaki Law Offices of Yakima, Wash., is hoping to go to trial this summer and expose the alleged abuse to the public.

The 2011 lawsuit was filed in conjunction with another lawsuit against the Diocese of Helena, listing 362 victims as plaintiffs. The diocese filed for bankruptcy and pledged a settlement of $15 million Friday, to be funded by insurance and the diocese’s assets.

As part of the settlement agreement, Helena Bishop George L. Thomas issued an apology Friday, saying no child should be the victim of abuse within the Catholic Church.

“On behalf of the entire Diocese of Helena, I express my profound sorrow and sincere apologies to anyone who was abused by a priest, a sister, or a lay Church worker,” he wrote in a news release.

The diocese also vowed to publish the names of clergy members who have been “credibly” accused and contribute $2.5 million to a fund assisting victims of abuse who come forward in the future.

Diocese spokesperson Dan Bartleson said he didn’t know how many names of former clergy members, many of whom are now deceased, will be published.

“The damage done here is a real and palpable pain,” Bartleson said. “(Thomas) has spent time apologizing and participated in the healing process personally. I don’t think any of us have a sense that the $15 million fixes things.”

Individual disbursement of the $15 million will be decided upon by an independent evaluator. If it were distributed evenly, the amount per plaintiff would be $41,436.46 before attorneys’ fees.

The lead attorney for the plaintiffs against the diocese, Molly Howard, could not be reached for comment.

It is true, Tamaki said, that no amount of money will fix the damage done by clergy members, but he said the partial settlement is a significant step in the healing process.

At a news conference at the Missoula County Courthouse Friday afternoon, Tamaki said the suit is the first of its size that lists the perpetrators of sexual violence as nuns, but he claims reports of sexual abuse by nuns is prevalent nationwide.

“The Ursulines have not taken steps to acknowledge accountability for the harms that they have caused,” he said.

He said the order has been “belligerent” in its failure to acknowledge the “horrors” that took place at the school in St. Ignatius.

The Ursuline’s attorney, Thomas Q. Johnson, could not be reached for comment Friday .

The suit lists Mother Superior Loyola, who Tamaki said was one of the main perpetrators of abuse, Mother Cecelia, Sister John, Sister Marion and other Ursuline nuns.

Tamaki was accompanied by several alleged victims of abuse, who emotionally recalled the years they spent at the school and the abuse they endured at the hands of the Ursuline Sisters and priests from the Oregon Province of the Society of Jesus – commonly called Jesuits – who ran the school.

One such victim, Francis Franny Burke, said when he finally came home from the school, at the age of 8, it was like getting out of prison.

“We were beaten and raped when we were just innocent children,” Burke said. “I relive it. It’s tough to even talk about.”

Burke was joined by Thomas Lozeau Jr., 55, Jackie Trotchie, 67, and Gary Salois, 61, all of whom took turns talking about the alleged sexual abuse and the toll it has taken on their lives.

“They’re having to accept the fact that these things did happen,” Lozeau said. “And as much as they wish it would go away, it’s not going to go away.”

BUTTE – The Helena Diocese has fired an unmarried Butte Central Catholic Schools teacher for getting pregnant, its superintendent said Tuesday.

Diocese of Helena bankruptcy: $33.6M in liabilities more than twice its assets

HELENA – The liabilities of the Roman Catholic Diocese of Helena total $33.6 million, or more than twice its assets of slightly more than $16 …

Lawyers: Abusers to be named in settlement with Catholic church of western Montana

HELENA – Most of the 362 sex-abuse victims who sued the Catholic church of western Montana, saying they were abused years ago by priests and n…

HELENA — An order of nuns being sued by people who claim they were sexually abused as children at the Ursuline Academy in St. Ignatius is aski…

HELENA — An order of nuns being sued for child sex abuse wants to bring the Roman Catholic Diocese of Helena back into state court. Attorneys for the Ursuline Sisters of the Western Province say they may seek to have the diocese to pay for part of any judgment that goes against the order.

HELENA – Attorneys for the Roman Catholic Diocese of Helena, an order of nuns and hundreds of alleged sex abuse victims said Tuesday they will…

HELENA – New claims of sexual abuse at the hands of Roman Catholic clergy are coming from the Blackfeet Indian Reservation, bringing to at lea…

Bishop George L. Thomas speaks at a news conference Friday Jan. 31, 2014, in Helena, Mont., about steps the Diocese of Helena has taken toward bringing resolution to claims of abuse by filing for Chapter 11 bankruptcy.

Bishop George L. Thomas fields questions from media Friday Jan. 31, 2014, in Helena, Mont., as he unveils the outline of settlement arrangements with abuse victims. "I want to assure you that none of those who have been credibly accused remain active in ministry at this time," Thomas said. "In fact, a majority of those accused have died."