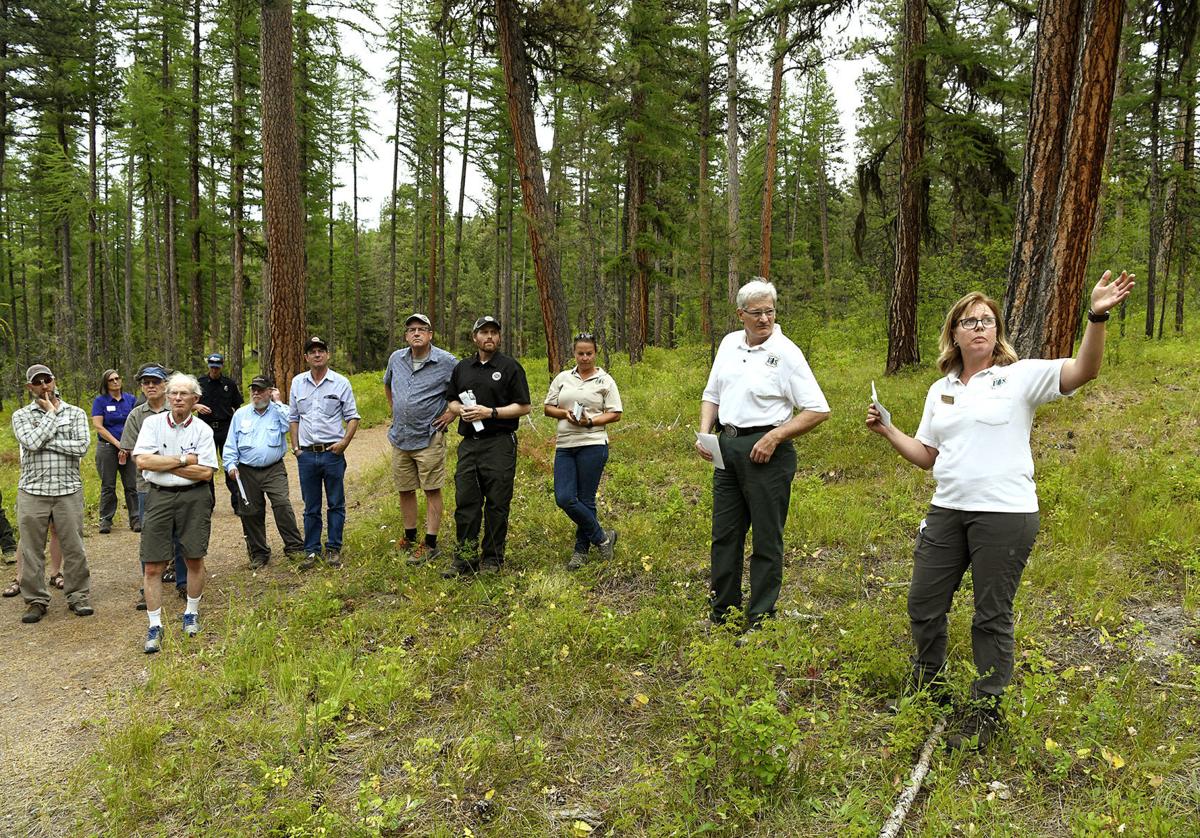 Lolo National Forest silviculturist Sheryl Gunn, right, talks about tree growth in Pattee Canyon during a public site visit Tuesday to show forest treatment projects. The site visit included talks on the history of fire in the Missoula area and what organizations and individuals can do to live with wildfire. 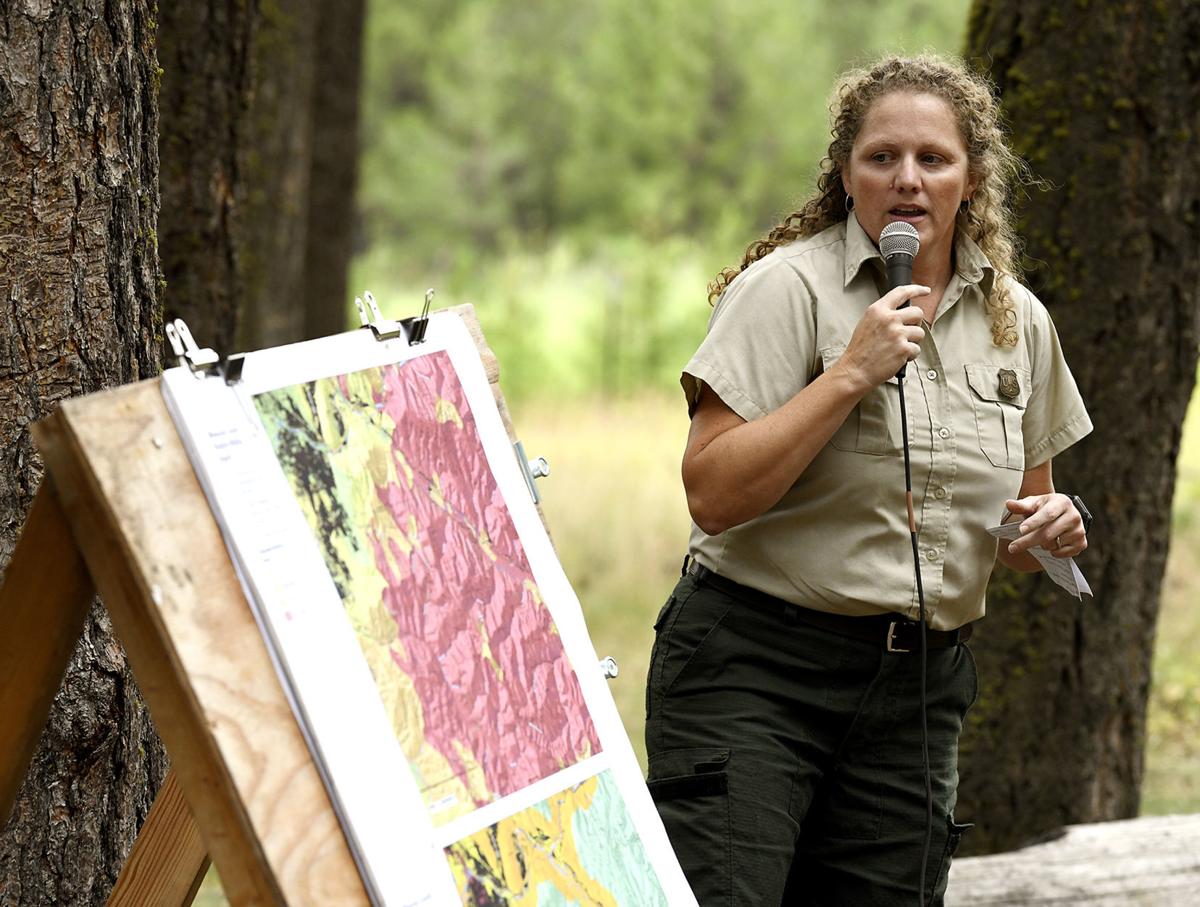 Missoula District Ranger Jen Hensiek talks about wildfire in Missoula County during the site visit at the Pattee Canyon picnic area on Tuesday.

PATTEE CANYON — As the sun peeked through the towering Ponderosa pines Tuesday afternoon, Lolo National Forest officials reflected on the previous land management actions while asking members of the public what they wanted to see in the future.

It was about 20 years ago that the Forest Service removed scores of Douglas fir from the landscape here, which took away ladder fuels and opened the canopy to lessen the intensity of fires in the 500-year-old "P-pine" crowns. They allowed for commercial harvesting of logs, thinned out small trees, and burned the underbrush, taking out combustible needles and pine cones.

Similar work is being considered for other portions of the Missoula Ranger District that surround the city, as part of a focused fuels and forest resiliency project called Wildfire Adapted Missoula. On a tour of the Pattee Canyon area with about 40 people, District Ranger Jen Hensiek noted that intense and fast-moving wildfires are becoming more frequent, threatening both people and property.

“I call it ‘the wicked problem.’ How do we reduce the risk in our community?” Hensiek asked. “We live in a fire dependent landscape. … “What do you think the action should be? What is the risk? What is our goal as a community?”

Pointing to large maps, she showed how the city is surrounded by forested lands that hold a high risk of intense wildfires. Hensiek added that while she lives within city limits, her home is in the urban wildland interface, and both the Forest Service and the citizens are responsible for mitigating the danger as much as possible.

The Wildfire Adapted Missoula project, known as WAM, is considering changing from the small-scale projects of the last 20 years to larger efforts like those in Pattee Canyon. In anticipation of a formal analysis and public comment process later this year, Hensiek and the National Forest Foundation are holding discussions with neighborhood residents, both government and non-governmental organizations, community leaders, local firefighters and businesses to talk about strategies to reduce fire risk and improve forest resiliency.

“Over the next six to eight months, we’ll be doing planning. This is the first step in that tonight, it’s about having a conversation,” Hensiek said.

Lory Rainey wants to participate in that conversation. She received a small grant to take out trees on her property, but it wasn’t enough to remove all that needed to go. Rainey added that she wasn’t allowed to seek additional grant money through the program to remove additional fuels.

“I want to be proactive … but how do you go about getting more help?” Rainey asked.

Hensiek added those are the types of discussions that need to take place, noting that new initiatives are creating additional opportunities for landowners. She also pointed Rainey to Max Rebholz, who is the new wildfire preparedness coordinator for Missoula County’s Office of Emergency Management.

“Your best bet is to talk to Max about potential options for the next step,” Hensiek said.

Tuesday’s tour was the second of three “Learning Labs” in which participants discuss why uncharacteristically severe wildfires have become a regular part of summer in recent years, as well as strategies to reduce the fire risk and improve forest resiliency. The next Learning Lab is set for 5 to 7 p.m. July 31 at the Missoula Rural Fire District Station 1 at 2521 South Ave. W.

Pattee Canyon area resident Mark Hollinger attended Tuesday’s tour, noting that he’s thinned out trees on his property and will continue to do so.

“I’m a strong advocate of people getting on board in the urban interface,” Hollinger said. “I think everyone should thin their property.”

For more information on WAM, go online to https://www.nationalforests.org/who-we-are/regional-offices/northern-rockies/wildfire-adapted-missoula

The city of Libby is emerging as a test case for how an urban community in Montana deals with chronic wasting disease, according to Montana Fi…

Don't overlook historic Skookum Butte lookout, one of the last of its kind

LOLO NATIONAL FOREST — Past the sea of beargrass, beyond the high mountain meadows filled with lupines, yarrow and asters, above the pines bur…

Two men killed during the devastating fire season of 2017 are being memorialized this week in the Treasure State.

Missoula will see more forest fires in its future, but it may have influence over how big they are and how long they last.

Missoula’s fire department has earned almost $395,000 during the past 10 months for renting its wildland firefighting equipment to communities…

Firefighters battle blaze "on a rock pile" near Missoula

At 35 acres, the Beeskove fire is small by Montana standards. That’s not making it easy to fight.

The Missoula Ranger District has put out a Wildfire Adapted Missoula plan that lays out multiple tasks for lowering fire risk in and around the Missoula Valley.

Lolo National Forest silviculturist Sheryl Gunn, right, talks about tree growth in Pattee Canyon during a public site visit Tuesday to show forest treatment projects. The site visit included talks on the history of fire in the Missoula area and what organizations and individuals can do to live with wildfire.

Missoula District Ranger Jen Hensiek talks about wildfire in Missoula County during the site visit at the Pattee Canyon picnic area on Tuesday.