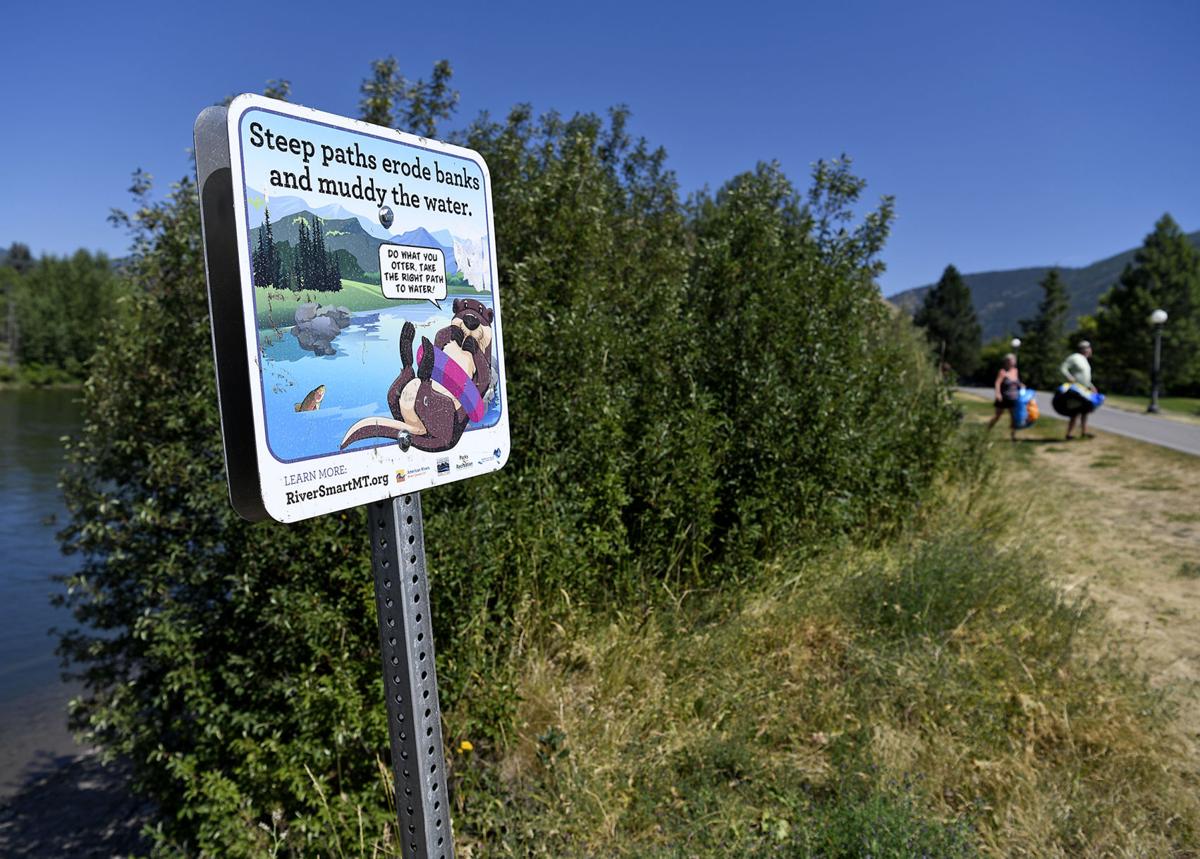 A sign posted on the south bank of the Clark Fork River in Missoula warns people not to erode the banks by using rogue trails, sometimes to no effect. The city has also narrowed the amount of grass it mows along the pedestrian trail to encourage regeneration of the banks. 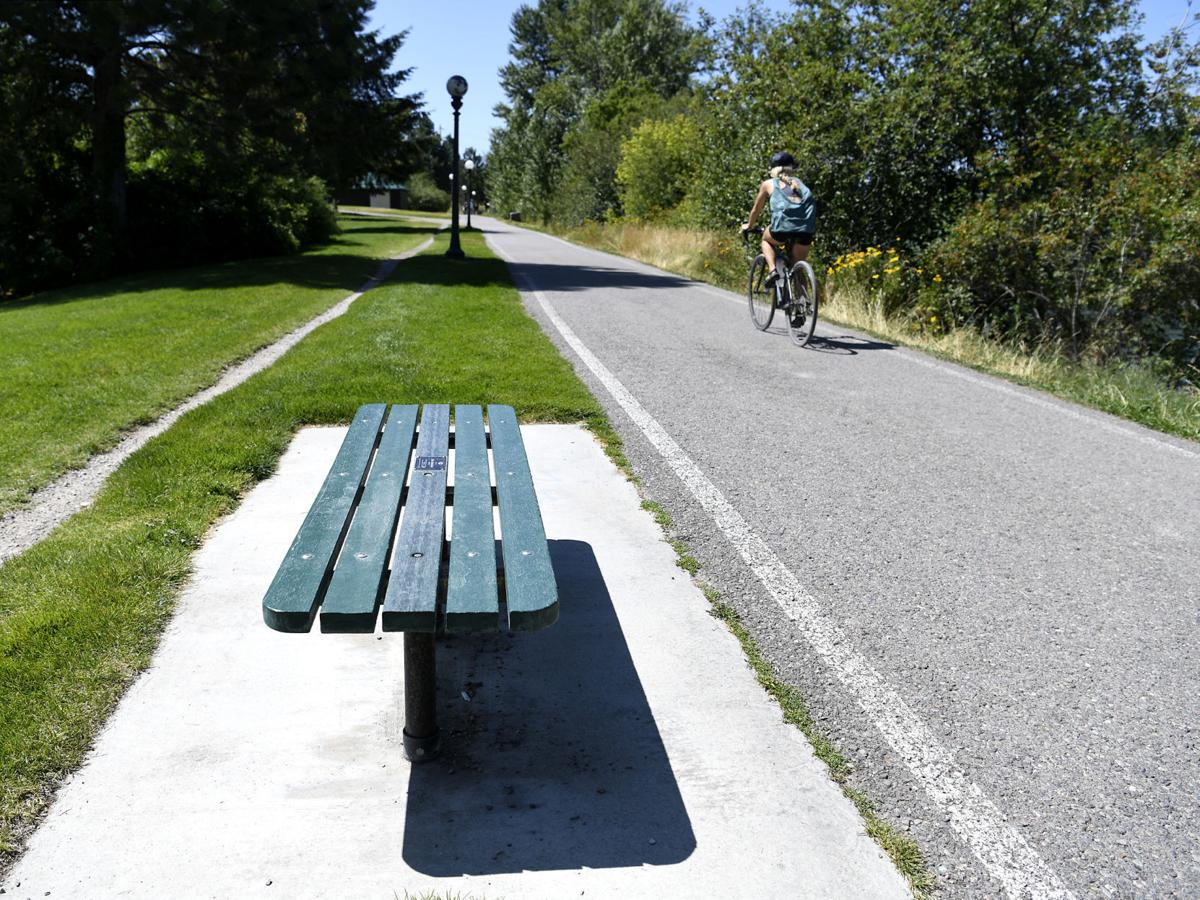 A number of benches have also been moved away from the river side of pedestrian trails to discourage user trails to the Clark Fork River.

One doesn’t usually reach for a lawn mower to fix a river problem, but sometimes that’s the tool that works.

Along the downtown reach of the Clark Fork River, dozens of little footpaths tumble 15 feet or more from the riverside pedestrian trail to the water’s edge between Madison Avenue and Higgins Avenue bridges. They mark where parties of inner-tube floaters, paddle-boarders, and dog-exercising waders have scrambled in and out of the Clark Fork on hot afternoons. And like varicose veins on an athlete’s leg, they indicate a public health and safety issue as water lovers erode the banks, spread weeds and leave trash and other, uh, waste along the shoreline.

So Missoula Conservation Lands Manager Morgan Valliant got together with the city lawn-mowing crews and lightened their workload a bit. Specifically, he asked them to mow about three feet of grass along the riverside trail instead of the full six feet.

“It’s helped tremendously with natural regeneration of woody species,” Valliant said. “We also had several benches between the trail and the river, and we just moved them to the other side of the trail. Between that and the mowing, over a dozen of these rogue, highly erosive user trails have disappeared.”

The trick doesn’t always work. Lines of fencing have discouraged use of several well-rutted trails on the south bank. But even a posted sign warning “Steep Paths Erode Banks and Muddy Waters” couldn’t prevent people from bending the wire mesh nearly to the ground at one spot near a public restroom at the east end of Fourth Avenue.

Yet this bit of social engineering is just one of several efforts underway to help people have fun on the river without loving it to death, according to Linda McCarthy of the Downtown Missoula Partnership.

“We’ve been seeing an overwhelming number of people using the river corridor,” McCarthy said. “That’s been the case for the last four to six years. The whole Blackfoot River corridor is also heavily used, and we’re seeing emerging use around Buckhouse Bridge on the Bitterroot River.”

This summer’s publication of a Downtown River Map helps floaters find the best entries and exits to the popular stretch between Milltown State Park east of Missoula and Silver Park, which has the last easily accessible boat ramp for leaving the water in the downtown area. Printed waterproof editions of the map are available at numerous locations downtown and at the Montana Department of Fish, Wildlife & Parks office on Spurgin Road. McCarthy said future editions will expand the scope to include access points on the Blackfoot and eventually the Bitterroot rivers as funds become available.

That was a relief to Joylynn Glidewell, who was leaving a shuttle car under the Higgins Avenue Bridge in preparation for a Tuesday afternoon float in the 90-degree heat. She and four friends were headed upriver to put in at Milltown State Park’s Confluence Area.

“We usually see people getting out by the big hotel (DoubleTree Hotel), but they’ve got signs up saying you can’t do that anymore,” Glidewell said. “It’s hard to know where to go.”

McCarthy said discussions are also building around expanding bus service from convenient parking areas like the University of Montana campus and other downtown sites.

“People like to go where there are restrooms and garbage — services you need when floating the river,” McCarthy said. “You have to have a little savviness to float the river. You need to know where to put in, where to take out and where it’s dangerous.”

“Missoula is known for the river. It goes all the way through town. If you hike up on the M, it’s the main part of everybody’s pictures that you see. It’s a big deal.”

Floaters illegally parked along most of Juniper Drive and Tamarack Road may receive citations now that the county has replaced vandalized "no parking" signs.

Old Highway 200 will be blocked completely near Marshall Canyon Road starting Monday evening and for much of the next several weeks to make room for an erosion repair project.

A sign posted on the south bank of the Clark Fork River in Missoula warns people not to erode the banks by using rogue trails, sometimes to no effect. The city has also narrowed the amount of grass it mows along the pedestrian trail to encourage regeneration of the banks.

A number of benches have also been moved away from the river side of pedestrian trails to discourage user trails to the Clark Fork River.