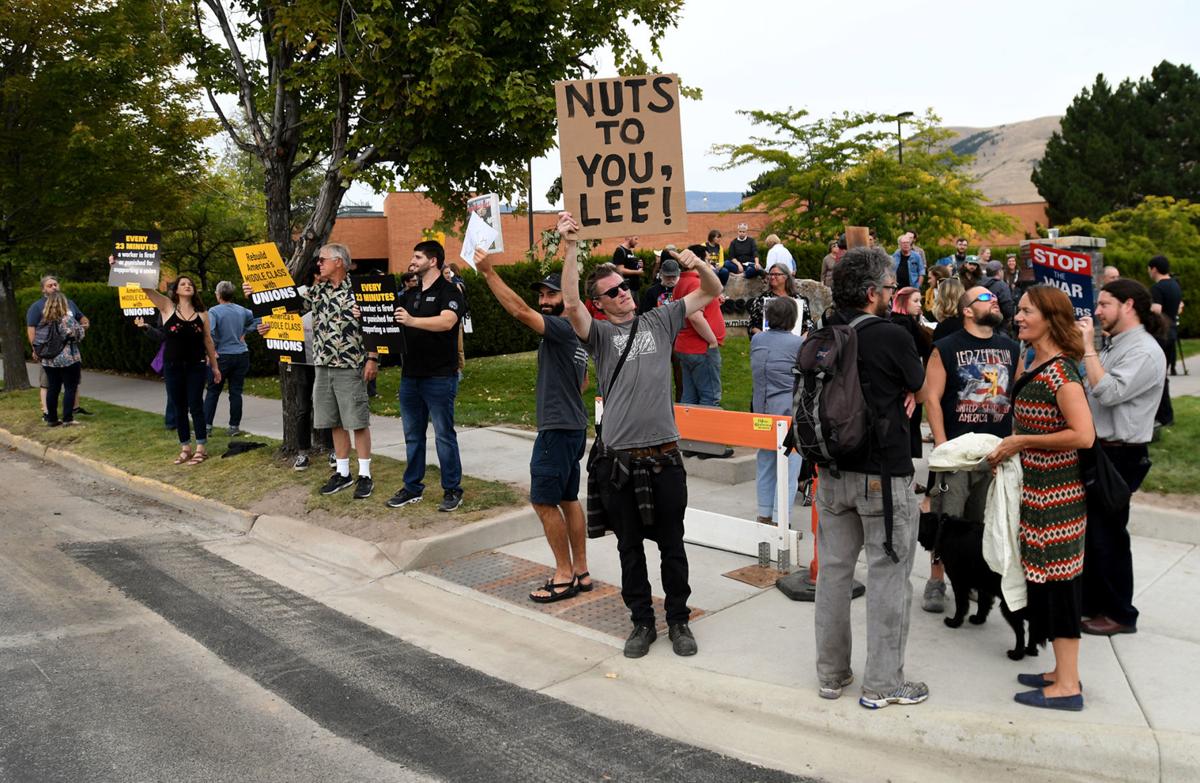 A group of protesters gathers outside the Missoulian offices Tuesday afternoon to protest the decision by Lee Enterprises Inc., to close the Missoula Independent. Lee owns the Missoulian, as well as the Ravalli Republic, the Helena Independent Record, The Montana Standard and the Billings Gazette. 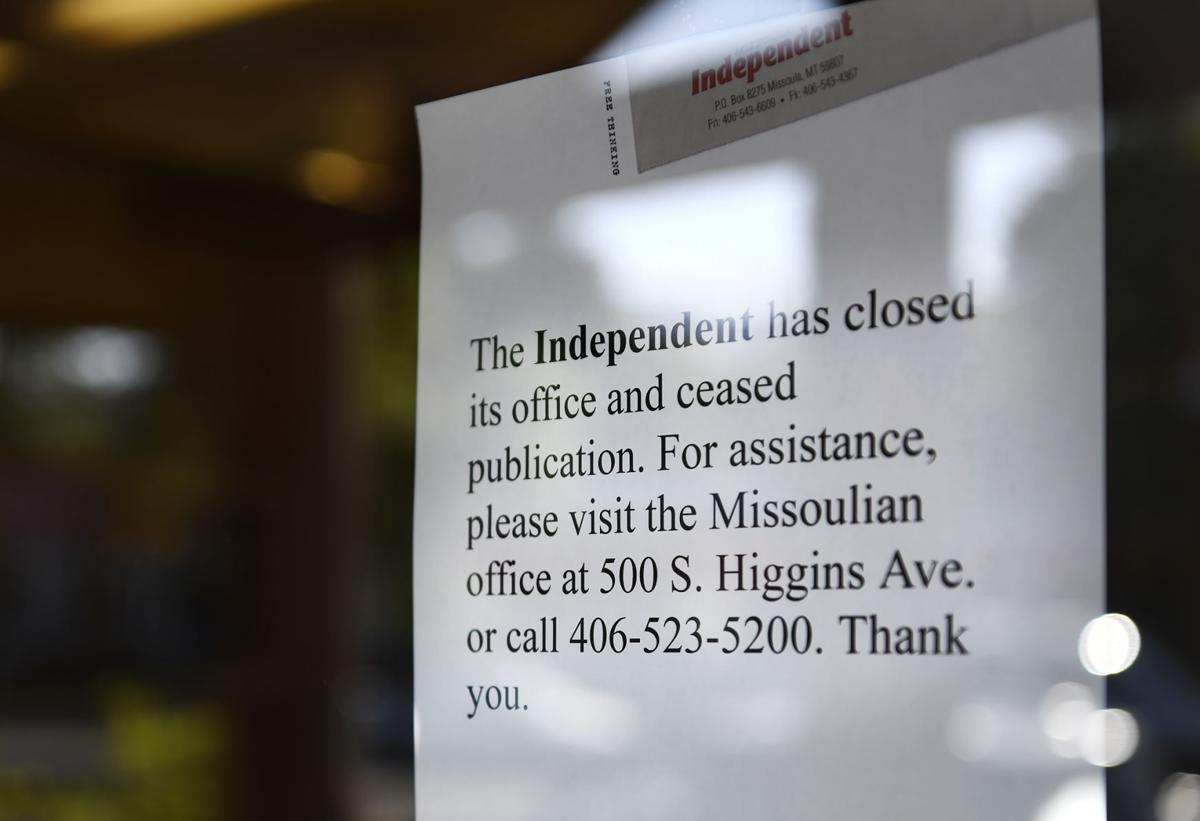 "The Independent has consistently lost money for its owners and is not financially sustainable," said Matt Gibson, general manager for the Missoulian, the Ravalli Republic and the Independent. 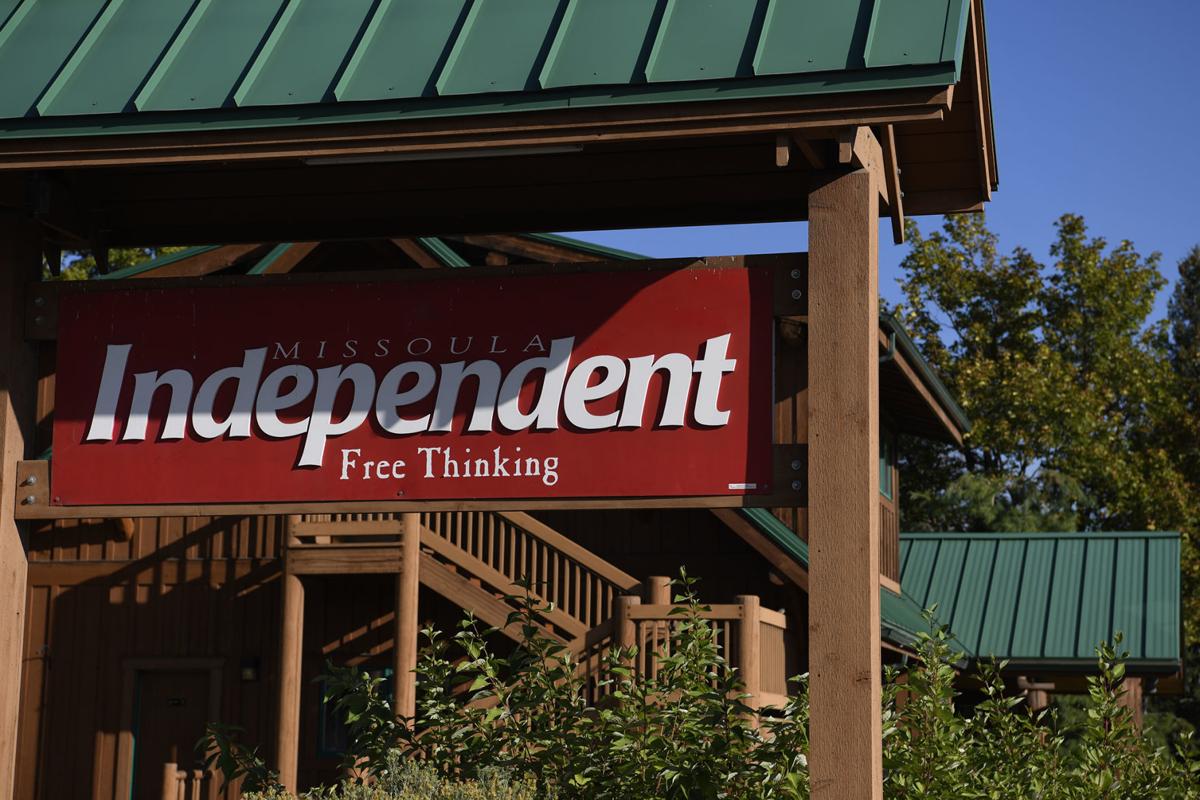 "It's sad for us to see a publication as longstanding and as freethinking as the Independent shut down," said Erin Erickson of Missoula Rises, which organized the demonstration that attracted about 75 people on the corner of South Higgins Avenue and Fourth Street East. Erickson stressed that the demonstration was not aimed at the Missoulian; rather its corporate owner, Lee Enterprises.

Matt Gibson sold the Independent — widely known as the Indy — to Lee in April 2017, then served as general manager for the Missoulian, the Ravalli Republic and the Independent. In Montana, Lee also owns the Billings Gazette, the Helena Independent Record and the Montana Standard in Butte.

"The Independent has consistently lost money for its owners and is not financially sustainable," said Gibson, who'd owned the Indy since 1997.

"I had hoped that by selling it to Lee Enterprises we would be able to create collaborative approaches and find new efficiencies to turn it into a profitable business," Gibson said. "Unfortunately our efforts were unsuccessful and the Indy continued to lose money."

“Made my last edit on a cover story at 12:29 a.m.,” Indy staffer Derek Brouwer tweeted Tuesday morning. “Was woken at 7:50 a.m. by a call from Lee Enterprises saying that the Indy is closed, effective immediately.”

Brouwer also tweeted an image of an email from Lee informing staffers that the paper had closed and that "the offices will be closed and you are not to report to work or come into the building." Salary and benefits will be provided through Oct. 10, according to the note.

Staffers could call the Missoulian to schedule an appointment to pick up their personal belongings, or have them mailed, according to the note.

Gibson rejected characterizations on social media that those actions amounted to a "lockout," saying that Indy staffers "continue to receive salary and benefits for a period of time … We're continuing to negotiate with the union as we unwind our operations."

The shutdown of the Independent follows a downward trend in the newspaper industry, particularly for alternative weeklies. The Village Voice in New York City closed two weeks ago and Seattle's alt-weekly, The Stranger, now publishes only every other week.

In April, the Indy staff voted to unionize, forming the Missoula News Guild. Negotiations were ongoing when the paper closed.

Lee Banville, an associate professor of journalism at the University of Montana, said the news of the Indy’s closure seemed inevitable. (Banville's wife was a freelancer for the Independent.)

“It certainly seems like the direction things were headed almost from the time Lee Enterprises purchased the Indy, and certainly once the Indy staff unionized,” he said.

Mark Anderlik, a longtime union organizer in Missoula who attended Tuesday afternoon's demonstration, said he was "outraged" by the decision to shutter the Indy.

"The implicit premise when they bought the Indy was that they would find a way to make it go so that we'd have robust journalism … this betrays the workers who'd worked hard at the Indy."

When the sale was announced last year, Gibson said it would allow Lee and the Indy to "maximize our resources to deliver strong local reporting, and we’ll offer unbeatable audience reach and marketing savvy for advertisers.”

Banville said one thing that did surprise him was Lee Enterprises’ apparent decision to shutter the Independent website, which makes its news archives inaccessible.

Gibson said efforts are being made to preserve the Indy’s archives.

Banville said he doesn’t think the decision by the Indy staff to unionize was the paper’s death knell.

“It might have changed the timing. It took the debate about the future of the alt-weekly public and it also clearly rankled Lee Enterprises to have to deal with a union. It may have sped things up,” he said.

Banville said “it’s a loss” that the staff wasn’t given time to put together a final issue with advance notice that it would be the last.

“It’s clear (Lee Enterprises) felt they could not have trusted a known last issue being produced,” he said. “I think they decided to not let them do that. They were probably worried what would happen. The decision to just lock everybody out is a fairly typical corporate move. That happens in other businesses like that. It still seems pretty rough and impersonal, but it’s how corporations oftentimes let people go.”

The non-mainstream viewpoints and underground culture of Missoula were often spotlighted by the Indy over the years, Banville said.

"I think the whole ‘keep Missoula weird’ aspect, the Missoula Indy was a big part of that,” he said. “The Missoula Independent helped foster and create the weirdness of Missoula. I think that’s going to be lost unless somebody steps in to fill that void. Missoula just got a little less weird.”

The paper was also a springboard for interns and young journalists looking to strike out into the world.

“It got a lot of really good journalists started here in Montana,” he said. “It was a great sort of training ground for people to do all sorts of different careers. It also gave a home to the ‘not typical’ sort of journalist. You didn’t have to be a kid who fit in everywhere. You could be a little bit weird or little bit eccentric and the Indy was better for it. The Indy was home, and loss of that is going to change the media environment over the next 10 years.”

Banville said he hopes readers don’t confuse the journalists at the Missoulian with the decisions made by the corporation that owns the paper.

“It’s not the Missoulian staff choosing to lose this. That’s the other thing, is the fall-out. I’m worried. I hope the community doesn’t see it as (Missoulian editor) Kathy Best’s fault. The journalists at the Missoulian are not the corporate entity,” he said.

The Indy began publishing in 1991 and was distributed at more than 480 locations in Missoula, Ravalli and Lake counties. It also had an online presence at missoulanews.com.

Lee Enterprises is a publicly traded media company based in Davenport, Iowa. Its daily newspapers and weekly publications reach 49 markets in 21 states. The company reported $566.9 million in revenue in 2017, but also has over $500 million in outstanding debt obligations.

“Pour one out for the Indy, y’all,” Brad Tyer, the paper's editor, posted on Facebook Tuesday. “… It was fun while it lasted."

The employees of the Missoula Independent voted unanimously to unionize on Friday, weeks after alerting parent company Lee Enterprises of thei…

It wasn’t 9/11 but his latest textbook that brought Bruce Whitehead into the Missoulian on Tuesday, the 17th anniversary of the attacks.

Barbara LeBuhn loved to walk across the University of Montana campus in the fall with her sister, Nancy Pickhardt.

A year into ownership of Missoula’s water utility, the city has spent $3.8 million to replace nine water mains, transferred 91 customers from …

The pilot of an experimental helicopter died Wednesday after he crashed into a hangar facility at Billings Logan International Airport, said airport director Kevin Ploehn.

ANCHORAGE, Alaska — Interior Department land managers have been ordered to review hunting and fishing regulations on department lands to determine how they conflict with state regulations.

Officials suspect foul play after a Great Falls man was found near death and partially bound in electrical wire near Lincoln.

Supporters of continued federal oversight for Yellowstone grizzly bears have asked a federal judge to block Wyoming’s grizzly hunting season for another two weeks while they await his ruling on the legality of removing the bears’ Endangered Species Act protection.

It’s a lot of monsters: 426, to be exact, hanging on the walls of two rooms and a hallway in the Zootown Arts Community Center.

The Montana Board of Regents approved Wednesday a $1.56 billion budget for the 2019 fiscal year, albeit with questions and pointed observations.

For Brent Ruby, building stand-up paddleboards is even better than cruising them across the surface of a calm lake through a mystical morning …

Missoulian general manager Matt Gibson is leaving to take a position as the executive director of the Montana Newspaper Association.

A group of protesters gathers outside the Missoulian offices Tuesday afternoon to protest the decision by Lee Enterprises Inc., to close the Missoula Independent. Lee owns the Missoulian, as well as the Ravalli Republic, the Helena Independent Record, The Montana Standard and the Billings Gazette.

"The Independent has consistently lost money for its owners and is not financially sustainable," said Matt Gibson, general manager for the Missoulian, the Ravalli Republic and the Independent.