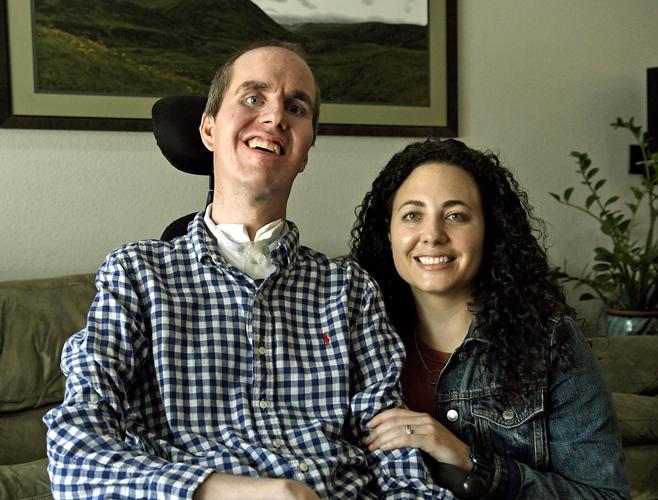 Jack Finlay, at home in Missoula with his wife Abby, will graduate from the University of Montana on Saturday with a doctorate in mathematics. Finlay reached the goal while dealing with the challenges of a diagnosis of amyotrophic lateral sclerosis (ALS). 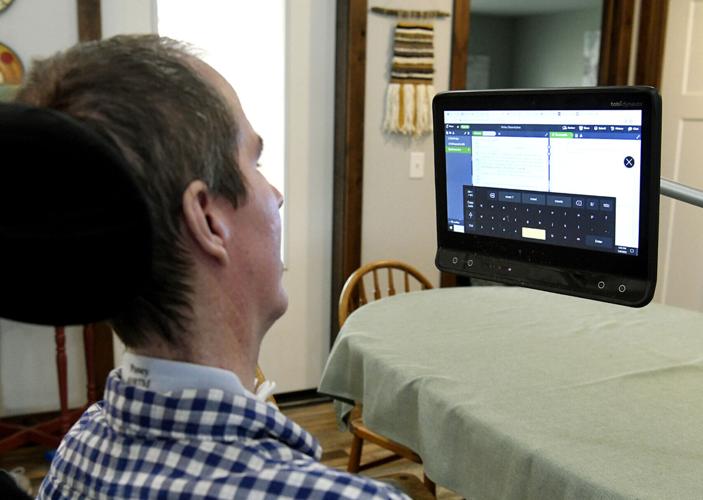 Finlay uses an eye-gaze computer that tracks the movement of his pupils to control the functions.

Whenever Jack Finlay is looking at the ceiling you can almost certainly bet he’s working through a math problem.

For the past 15 years, he’s been moving through the ranks of academia at the University of Montana's mathematical sciences program, all the while navigating challenges that come with being nearly 12 years into an amyotrophic lateral sclerosis (ALS) diagnosis.

“He stares at the ceiling because he can’t really do scratch work,” said Abby Finlay, Jack’s wife of six years. “So whenever I see his eyes going up, I know he’s thinking about math and imagining it on the ceiling.”

On Saturday, he’ll graduate from the university with a doctorate.

Jack was first diagnosed during his junior year of undergraduate studies in November 2010. He dreamed of becoming a doctor, but his diagnosis made him consider a different path.

“I thought I should find something that I could do without my hands,” Jack said.

His decision to transition to a degree in mathematics caused some of his UM professors to reflect on their own passions.

“He chose the ultimate life of the mind in specializing in mathematics,” said Mark Kayll, a professor in the mathematical sciences program. "He figured, I guess, that he would be able to keep doing that as long as he lives.

“It’s a dedication to my subject that makes me sort of — I don’t know — it gives me pause,” Kayll continued. “Would I make that choice? I mean, do I love mathematics as much as he does?”

While Jack had a deep interest in math in high school, his inconsistency in turning in homework might have indicated otherwise to outsiders. He now jokes that he was saving himself for homework and academics that lay ahead of him.

“I fell in love with the logic of math,” Jack said. “When I get down it is good to do math to reset myself.”

Jack worked with Kayll and Cory Palmer, another professor in the mathematical sciences program, as he moved through graduate classes and eventually to his doctoral work. For his doctorate, Jack worked with random graphs that model networks like Facebook or crime rings.

For example, in a graph modeling Facebook, individual people would be represented by dots, or vertices, and the lines that connect those points to each other represent them being “friends.” The result looks like the maps that visualize various connecting flights from airports.

“This random thing is a very powerful way of handling complex behavior in some controllable way,” he continued.

Another aspect of random graphs that people are interested in is examining the connectivity of a network.

“His motivational paragraph is a very pure math thesis,” Kayll said. "But he does motivate it with a historical problem about computer networks and passwords."

After graduation, Jack plans on becoming an actuary after passing the exam.

Getting to this point was no easy task. Over the last 12 years, Jack’s physical abilities have diminished to the point that he needs to use a wheelchair. He’s also lost his voice and often uses a computer to speak. Abby can also read Jack’s lips to communicate with him.

In order to communicate, play chess or do school work Jack uses an eye-gaze computer — a tablet-sized device that has cameras to translate the user's pupil movements into mouse cursor movements and functions.

Due to his medication, Jack stopped attending classes in person around 2017 and instead utilized a robot to sit in for him. The four-foot-tall robot has a camera Jack controls remotely to view the classroom, and a screen so he can speak with people in class.

But typing on his eye gaze computer is not a breeze. It requires an incredible amount of time and concentration. After years of practice, only a fool would challenge Jack to a staring contest.

“But I do have the best looking homework,” Jack joked.

The math building is one of the few places Jack feels normal. He very rarely accepted extensions on homework offered by his professors through the university’s disability services.

“I like to think of myself as normal,” Jack said. “I think it’s how I deal with ALS. I feel normal when I am held to the same standards.”

“There’s been times that he’s been hospitalized for weeks and he still shows up to class,” Abby added. "He takes the test as he’s laying in the hospital bed."

Through juggling his academic pursuits with ALS, Jack’s learned that he has more patience than he previously thought.

Abby said Jack has taught her to be less of a worrier.

“He’s always telling me that things will always work out, it’ll all be OK,” she said. “And every single time he said that it’s always true. Just that faith in everything, as chaotic as things get. Everything eventually settles down and re-balances.

“You say that — that you can handle everything that’s put in your path, but Jack just shows that every single day.”

Across the country, many child care workers participated in A Day Without Child Care by going on strike. Most Missoula providers opted against closing their doors.

'Second to none': Blakely to be next Hellgate Elementary superintendent

After six years of working with Hellgate Elementary, assistant superintendent Molly Blakely is stepping up to the role of superintendent.

“In all of Missoula, we just need more color,” said Keira Kujawa, a seventh-grade student at Sussex.

University of Montana explores sale of beer and wine on campus

"A major reason why we are exploring this possibility of a taproom on campus is to provide our students further engagement — which is critical as we take steps coming out of the pandemic," said UM spokesperson Dave Kuntz.

At a coroner’s inquest Friday morning in Missoula, a jury confirmed a young Native American man died by suicide last summer during a chase with Missoula police.

Students returned to the Adams Center for spring commencement from the University of Montana after the pandemic disrupted ceremonies for the last two years.

Jack Finlay, at home in Missoula with his wife Abby, will graduate from the University of Montana on Saturday with a doctorate in mathematics. Finlay reached the goal while dealing with the challenges of a diagnosis of amyotrophic lateral sclerosis (ALS).

Finlay uses an eye-gaze computer that tracks the movement of his pupils to control the functions.