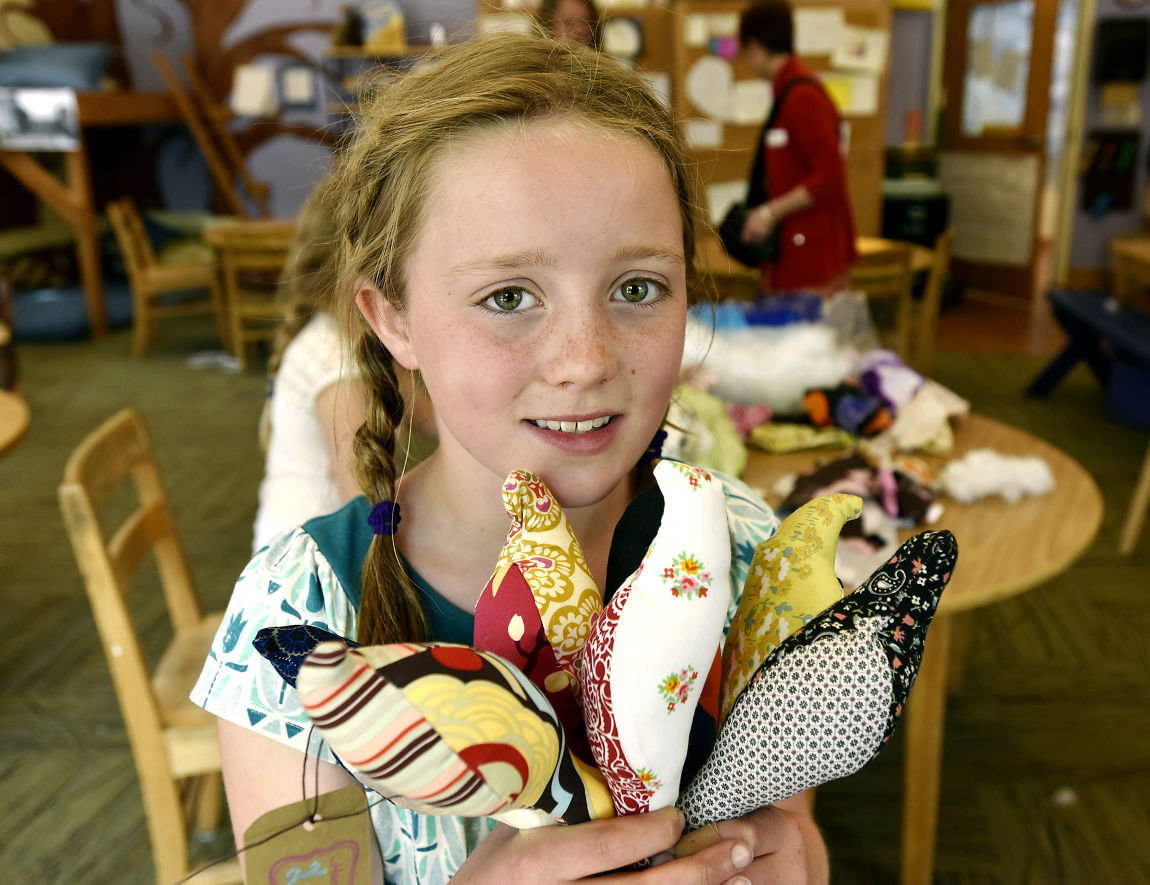 Lily Miller, a fourth-grader at Sussex School, has been raising money to send Nepalese girls to school by selling Lily's Lovebirds. Lily makes the cloth birds with help from family and fellow students. 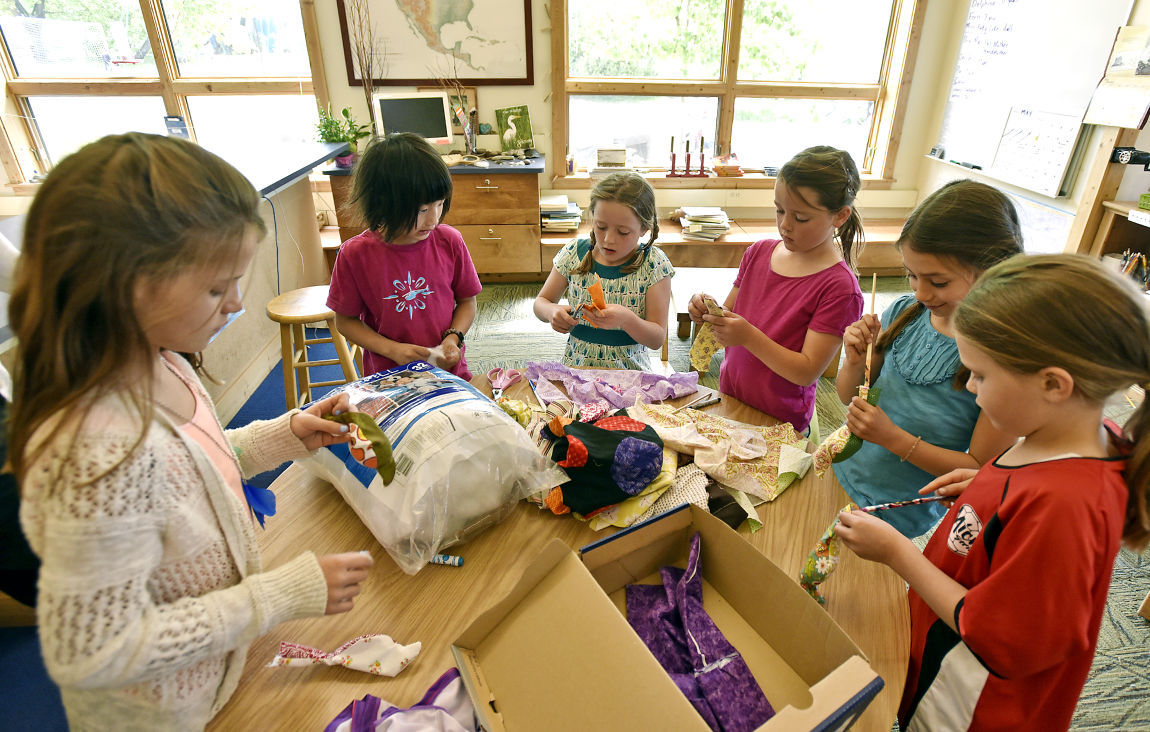 A group of Sussex School students makes the stuffed birds recently at the school. 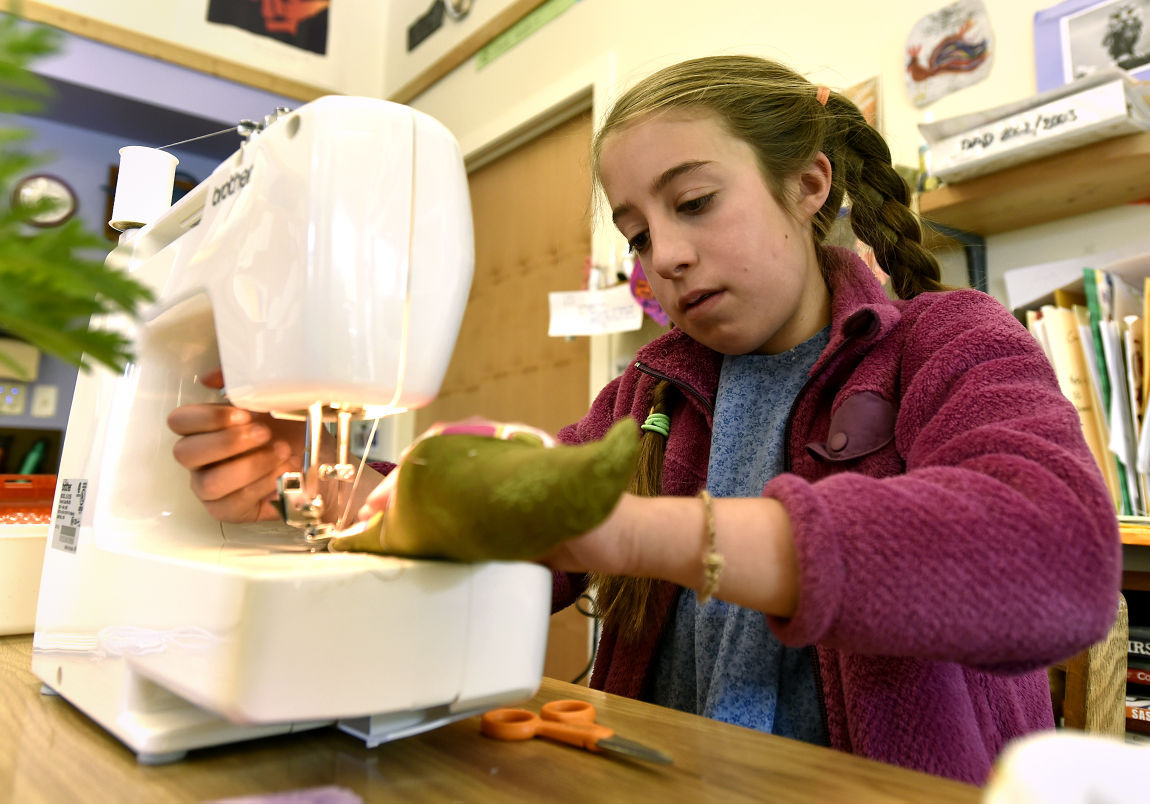 Fifth-grader Daisy Kulina sews some of Lily's Lovebirds recently at the school.

Lily Miller is the only girl on her hockey team – an outward manifestation of her belief that girls can do anything.

When she read “I Am Malala” by Malala Yousafzai, she was shocked that girls in other parts of the world don’t go to school.

“And I really wanted other people to go to school, too,” she said.

When girls are educated, they grow into women who are able to better support their families and communities, leading to more peace, she said.

It only costs $10 to send a Nepalese girl to school for a month through The Power of 5, which is part of the Conscious Connections Foundation.

Initially, the Sussex School fourth-grader made the birds for a fundraiser for the all-abilities playground when she was is second grade.

“I started it because I wanted to help someone,” Lily said while she traced the pattern for a bird’s body on a piece of brightly colored fabric.

Lily is on a team of three, including her mom, Terry, and younger sister, Maizy.

Each bird takes about half an hour to complete.

The girls cut out the birds when they have a few minutes to spare and then stuff them when they watch movies. Terry sews them when she finds time.

“It’s really fun to work with them because we talk a lot and have smiles on our faces,” Lily said.

The trick is preventing burnout and keeping the project a work of love, Terry said.

The birds and Lily’s efforts have been gaining notoriety, and the A Mighty Girl website has been helping spread the word about the birds.

Because so many people want one, the birds are on backorder.

“It’s amazing because it shows that even a small, quiet voice can resonate above all the noise,” Terry said, adding support and offers of help have streamed in from as far away as Florida.

“I think it’s good news in a world of bad news,” she said about why Lily’s work has interested so many people.

Several Sussex students have been inspired to help, and on Thursday some of Lily's schoolmates helped her make 16 birds and another recent work session resulted in 50 birds.

“Then to be able to help someone at the same time is even better because you feel great while you’re sewing,” Kulina said from her perch by the sewing machine.

She said she knew not all girls are allowed to go to school and, coupled with the devastating Nepal earthquake, it made sense to help.

Through letters, Lily gets to know the girls who she helps and about their lives.

“They thank me,” she said, adding she was relieved to hear that none of the girls at the school she helps were injured in the earthquake because they were outside at recess.

“I was sad, but I was happy that no one was hurt,” she said.

So far, Lily has raised about $3,000 for The Power of 5 and the Malala Fund and she said she plans to continue the work.

“Because I feel happy making them and it’s fun communicating with all of the girls in Nepal,” she said.

To learn more, go to lilyslovebirds.com.

Greg Friedman wore shorts and flip-flops for the first day of school at Sussex School.

Missoula girl, Thompson Falls woman to be honored for service to community

Caroline Keys somewhat jokingly says her dream job would be as a backup singer.

In between preparing for the state MathCounts and spelling bee competitions later this month, Emma Peasley finds time for other pursuits, incl…

Missoula schoolchildren became flames and trees Tuesday during “Fire Speaks the Land,” an interactive dance performance that taught students a…

Lily Miller, a fourth-grader at Sussex School, has been raising money to send Nepalese girls to school by selling Lily's Lovebirds. Lily makes the cloth birds with help from family and fellow students.

A group of Sussex School students makes the stuffed birds recently at the school.

Fifth-grader Daisy Kulina sews some of Lily's Lovebirds recently at the school.