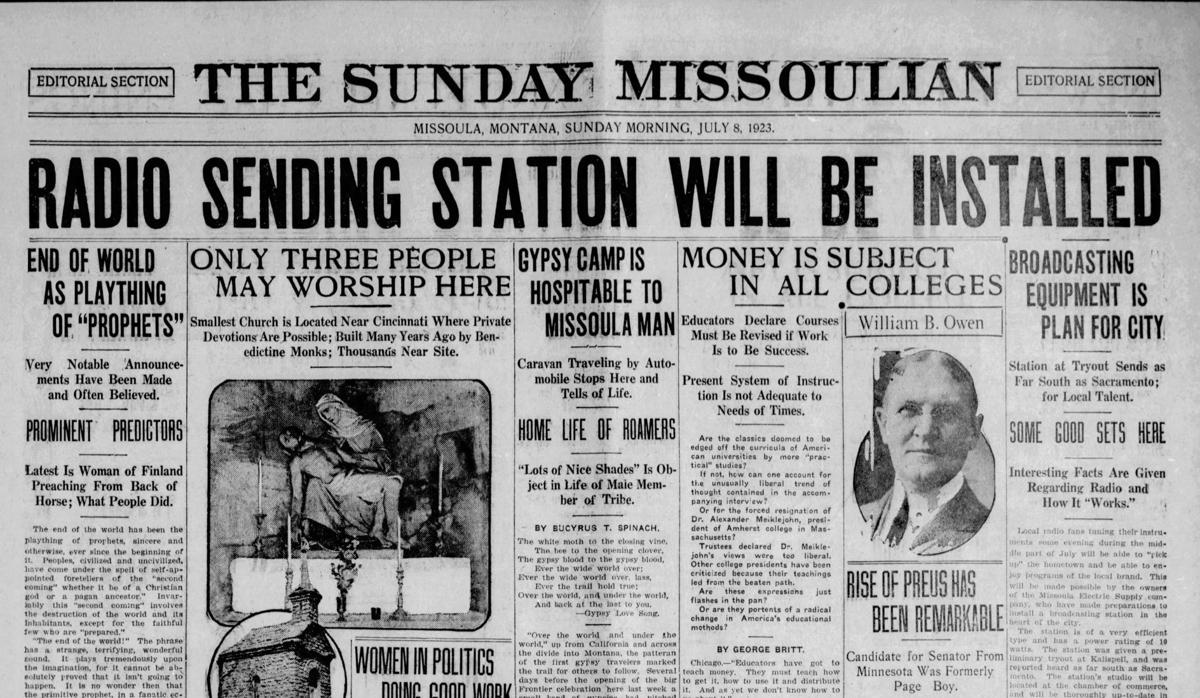 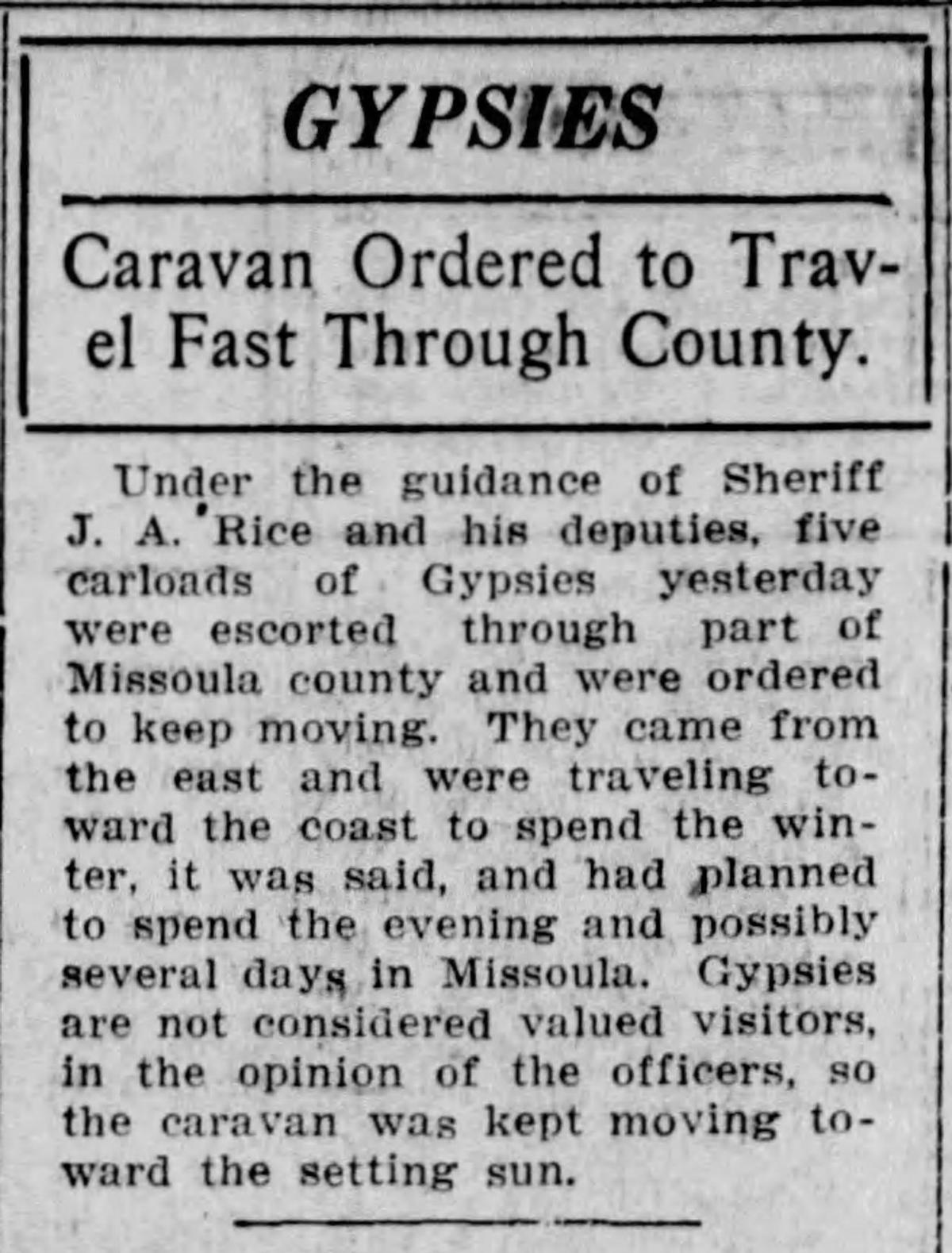 It's safe to say Missoula and Montana never did come to grips with one forgotten minority group. Whenever caravans of Gypsies appeared, we responded the same way in 1915 as we did in 1975, with suspicion, stereotyping and intolerance.

That said, it never reached the level of violence experienced in Europe in the 1930s and 1940s, when half a million Gypsies — or Roma, as they prefer to be known — were gassed, tortured and starved to death by the Nazis of Germany.

Roma were largely poor, non-English speakers who gained unseemly reputations because they roamed from town to town across America, first in wagon caravans and then in automobiles.

"Gypsies Ordered to Leave the City Immediately. Band of Wanderers Camped East of Town Is Told to Cut 'Er Loose," was a Page 3 headline in the Missoulian on June 14, 1915.

The story said the unwelcome visitors complied, "realizing well that it was fortunate that a charge of fortune telling was not pressed against them."

In March 1933, four cars loaded with 35 Roma reached Missoula from the west "but barely entered the city limits when the officers met them and requested that they keep going," a news story said. "They were escorted through the city and as far east as Bonner."

The story said a number of years earlier "petty thievery was noticed every time groups of Gypsies camped near the city.” Ever since then “the tribes have been hurried on."

Three months later, on June 4, 1933, came this report: "Gypsies touring through this section have apparently told each other that Missoula is not a good city for them to visit. As a result, a small band camped Saturday at Bonner, on A.C.M. property. Elmer A. Wurtz, an operator for the company, telephoned the sheriff's office that campers were welcome there, but not the Gypsies."

Deputy Earl Secrist of Milltown went up to Bonner, "and a short time later the Gypsies departed," the Missoulian reported in those heart-of-Depression years.

It was statewide news in August 1963 when some 125 Roma made their way in a car caravan across the Montana Hi-Line.

“The gypsies say they do roofing work,” an Associated Press account said.

They entered western Montana where law enforcement “put a little pressure” on them to keep moving east. Sheriff Ed Pierson was prepared to give the travelers a forgiving reception in Toole County. That was dashed when a group of teenagers showered the caravan with rocks and bottles west of Shelby. No arrests were made.

The band filtered through Havre about noon on Aug. 8 and was “boosted” through Chinook to Harlem. The Roma were looking for a park to camp at in Blaine County, the sheriff said. He was more concerned about them stopping at a state park near the Missouri River than about them stopping in town.

“He said ranchers might be bothered,” the story said.

A reporter asked Forrest Anderson, Montana's attorney general at the time, about the legal grounds of prosecuting Gypsies. Anderson said the most common tool would be a vagrancy statute dating back to Montana’s territorial days that applied to “every person (except an Indian) without visible means of living, who has the physical ability to work and who does not seek employment,” as well as “every person who roams about from place to place without any lawful business.”

As late as Aug. 26, 1975, an AP story datelined Virginia City reported the apprehension in Basin of 16 "Gypsies" — two men and "a congregation of women and children, all of whom professed scant or no knowledge of English" — on suspicion of stealing $1,400 from a hotel-store in Cameron, Madison County. One woman, Shojkd Elizabeth Yenis of Los Angeles, appeared in court and was released on $1,000 bond after a Sept. 22 preliminary hearing was set. She didn't appear, forfeiting the bond.

Yenis' husband flew to Montana from California where he was a roofing contractor. Asked by a Great Falls reporter if the "Gypsy" appellation applied to his wife and her party, Alix Yenis hotly replied: "My wife is Hungarian and I'm Mexican. What is that supposed to mean? Are we two-headed monsters or something?"

At the same time, a group of 20 to 30 travelers in five "new, glistening automobiles" also identified as a gypsy caravan was stopped in Harlowton. Authorities had received a complaint that tennis shoes and other goods were taken from a local variety store. No stolen goods were found in a search of the cars, however, and the convoy was sent on its way.

"Sheriff's Deputy Larry Clifford of the Wheatland County office said English-speaking members of the group said they had emigrated from Yugoslavia to Mexico, leaving Mexico City for resettlement in the Chicago area about two years ago," the AP reported.

As recently as the early 1980s, Missoula had a visit from travelers identified as Gypsies. In a 1983 Missoulian story, reporter Steve Smith talked about how St. Patrick Hospital was dealing with patients who didn't speak English.

“The hospital faced a particularly unusual language-barrier challenge last summer when a caravan of Gypsies from the Chicago area came through town,” Smith wrote. “In the group was a woman suffering from severe abdominal pains.”

The woman spoke a Slavic language, Smith said, and “only through considerable arm-waving and body language were doctors and nurses able to help her.”

A bloomin' time in Ireland, Missoula

Next Sunday, June 16, is Bloomsday.

Missoula's Derby horse gave us an exciting month in '87

First word of Missoula’s first chautauqua came in the spring of 1913.

A 19-year-old Florence teen is charged with felony assault for threatening his mother with a hammer before barricading himself away from police in her home.