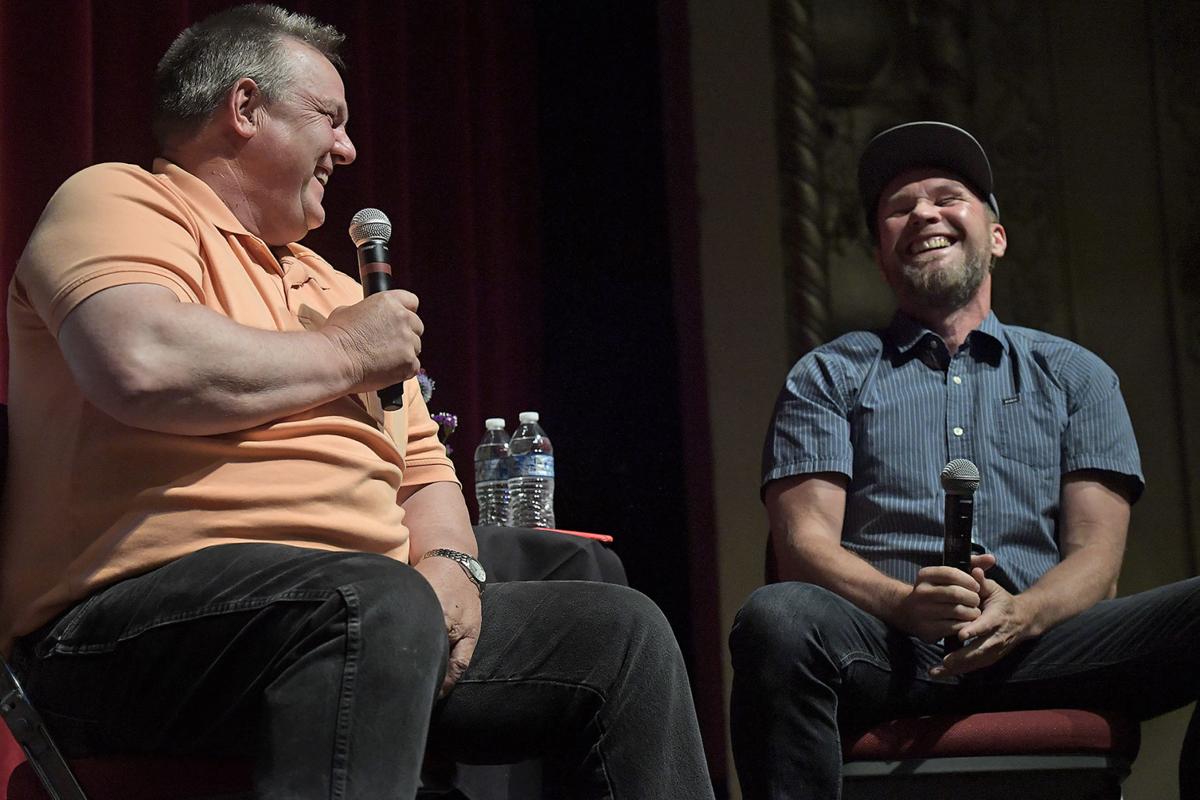 Sen. Jon Tester and Pearl Jam bassist Jeff Ament share a laugh before answering questions Sunday night at the Wilma. Ament and Pearl Jam have played in Missoula every time Tester has run for office since 2006. 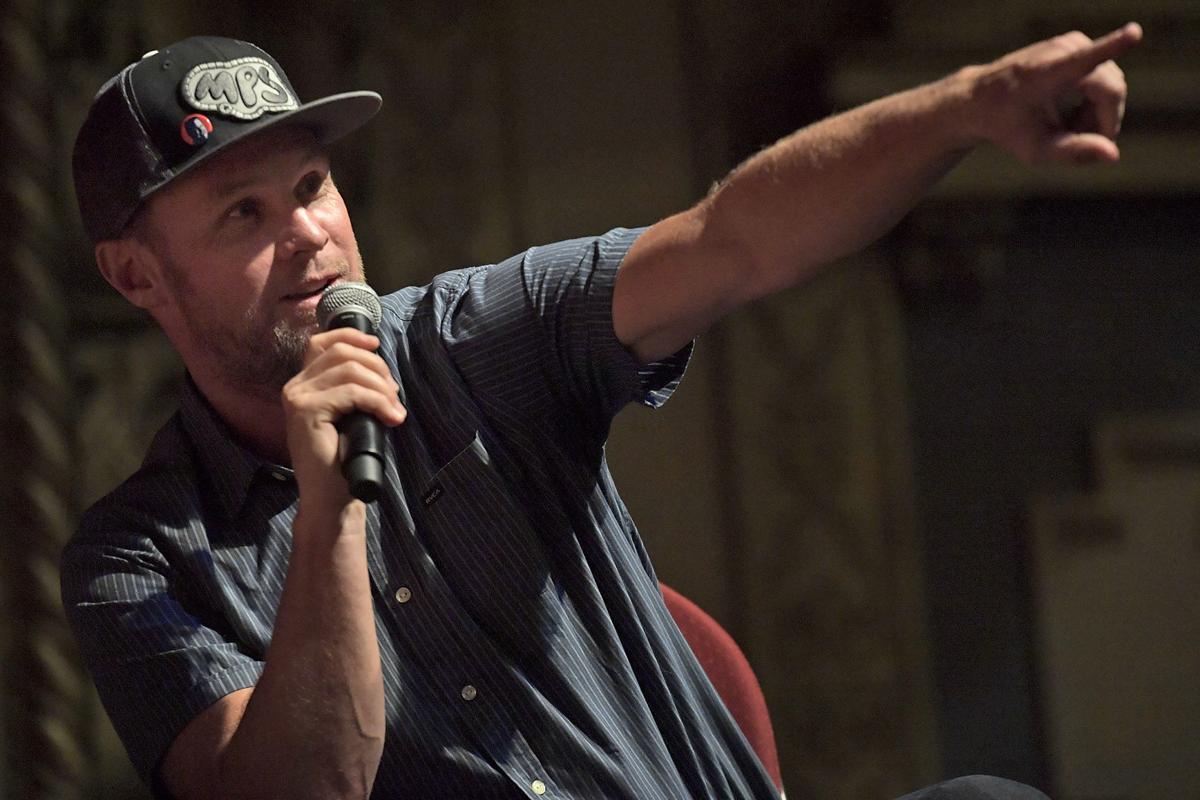 Pearl Jam bassist Jeff Ament points to his parents in the crowd. Ament is a few years younger than Tester and knew the senator growing up in Big Sandy.

Tester and Ament talked a little about music and reminisced about growing up in the small town of Big Sandy during a question-and-answer session at the Wilma Theater here Sunday night in advance of Pearl Jam’s concert Monday night. Missoula Mayor John Engen played host and about 700 people came, more than live in Big Sandy.

Pearl Jam has only four U.S. cities on its tour this year: Seattle, Chicago, Boston and Missoula. The band is playing here to help rally support for Tester, a Democrat who is seeking re-election to what would be his third term this fall.

Tester is running against state Auditor Matt Rosendale, a Republican who has drawn a significant amount of support from national groups seeking to unseat Democrats in states President Donald Trump won in 2016. Montana fits that bill: Trump won by 20 points here.

Engen, also a Democrat, asked Ament about why it's important to him and the band to play concerts like the one set for Monday at Washington-Grizzly Stadium, where about 25,000 are expected.

“The more we travel and the more that we see, you have more and more conversations, and a lot of those conversations are people that relate to a lot of our songs, which address a lot of those issues and I think that just puts you in touch with sometimes the desperation and the injustice and things that are happening around the world and it makes you want to be their voice, because a lot of those people don’t have a voice,” Ament said.

“We’ve sort of built this platform that allows us to comment and have an opinion and it’s what makes the band great. It’s what I love about it. I love that even if people don’t agree with where we’re coming from, I love that. Let’s bring on that conversation between people and get people to understand what’s going on out here. Sometimes people have their avenues for getting their information and sometimes those avenues aren’t giving you the right information.”

Tester, who will turn 62 later this month, and Ament, 55, grew up knowing each other’s families in the town of Big Sandy, home to about 600 people in the shadow of the Bears Paw Mountains in Montana’s Golden Triangle, known for prime wheat-growing conditions.

Ament said that growing up, Tester was a better student.

“I think the teachers and our superiors were probably more excited about his path than my path at the time," Ament said.

Engen ribbed Tester with a joke about the senator not spending much time in Montana, though he was working on his farm this week during the August recess. It’s an issue on which Rosendale has tried to attack Tester, telling voters that after a dozen years in the U.S. Senate, Tester is more connected with Washington, D.C., than the Big Sky state.

Tester gave it back to Engen, saying “It seems so long ago I was (in Big Sandy), like 3 o’clock this afternoon.” The senator then got serious about what his family farm, which was homesteaded by his grandparents, means to him.

“It’s grounding. It’s home. It’s where we’re from, where Jeff goes back to, where I still live," Tester said.

Ament’s dad, George, was the mayor and barber in Big Sandy, and Tester told the crowd George Ament was the first to give him the flattop haircut for which he’s now famous.

“George is the guy that first patented the haircut here on my head,” Tester said, adding that it came after he asked the barber to give him curly hair.

“I went to a school board meeting and had this fluffy hair and that didn’t work too good, so then we decided to go with the low-maintenance version, which was a high-and-tight flattop.”

The two also brought up Ament’s work to build skate parks around Montana, including one that just opened in Rocky Boy’s reservation, just north of Big Sandy.

“I didn’t think I’d be in a band this long, to still be doing it and making money has allowed me to roll over a bunch of that money into really cool projects,” Ament said. “ … It’s like a long marriage. If you can somehow navigate through the rough water and you get 30 years in, there’s some really special stuff happening and that’s where we’re at.”

Before picking up a guitar on stage that fans probably hoped Ament would play, Engen encouraged people to sign up to help Tester’s campaign with knocking on doors and getting people out to vote.

Engen played a song he wrote for the occasion, a three-chord special that focused on Tester’s haircut, as well as his missing three fingers Tester lost to a meat grinder accident as a child.

Arleen McGlade and her husband came from Littleton, Colorado, to see Tester and Pearl Jam.

Though McGlade, a Democrat, and her husband, a Republican, can’t vote in Montana, they’re still passionate about Tester, following and supporting his career. They also came to the 2012 Pearl Jam concert in Missoula in support of Tester.

“We do keep an eye on Jon Tester and what he’s doing,” McGlade said. “Jon is one of these guys we feel is reasonable when most aren’t. We aren’t the type to support any politician, but Jon is an exception.”

Linda Ducharme Deschames, who was born in St. Ignatius and lives in Missoula, said she’d never heard a Pearl Jam song, but wanted to support Tester.

“I like him. He’s done a lot for the Native Americans and for the veterans,” Ducharme Deschames said.

'I had to get out of there': Fire rages around Glacier Park's Lake McDonald

Wildfires in southwest Montana growing, one driven by its own smoke column

Helicopters were aiding suppression efforts on three wildfires in southwest Montana on Monday, including one in the Goldstone Pass that was largely driven by its own giant plumes of smoke.

When Pearl Jam first released the song, "Not For You," back in 1994, singer Eddie Vedder sounded downtrodden when he said, "all that's sacred …

If people are going to tailgate, why not give them a cause?

Sen. Jon Tester and Pearl Jam bassist Jeff Ament share a laugh before answering questions Sunday night at the Wilma. Ament and Pearl Jam have played in Missoula every time Tester has run for office since 2006.

Pearl Jam bassist Jeff Ament points to his parents in the crowd. Ament is a few years younger than Tester and knew the senator growing up in Big Sandy.