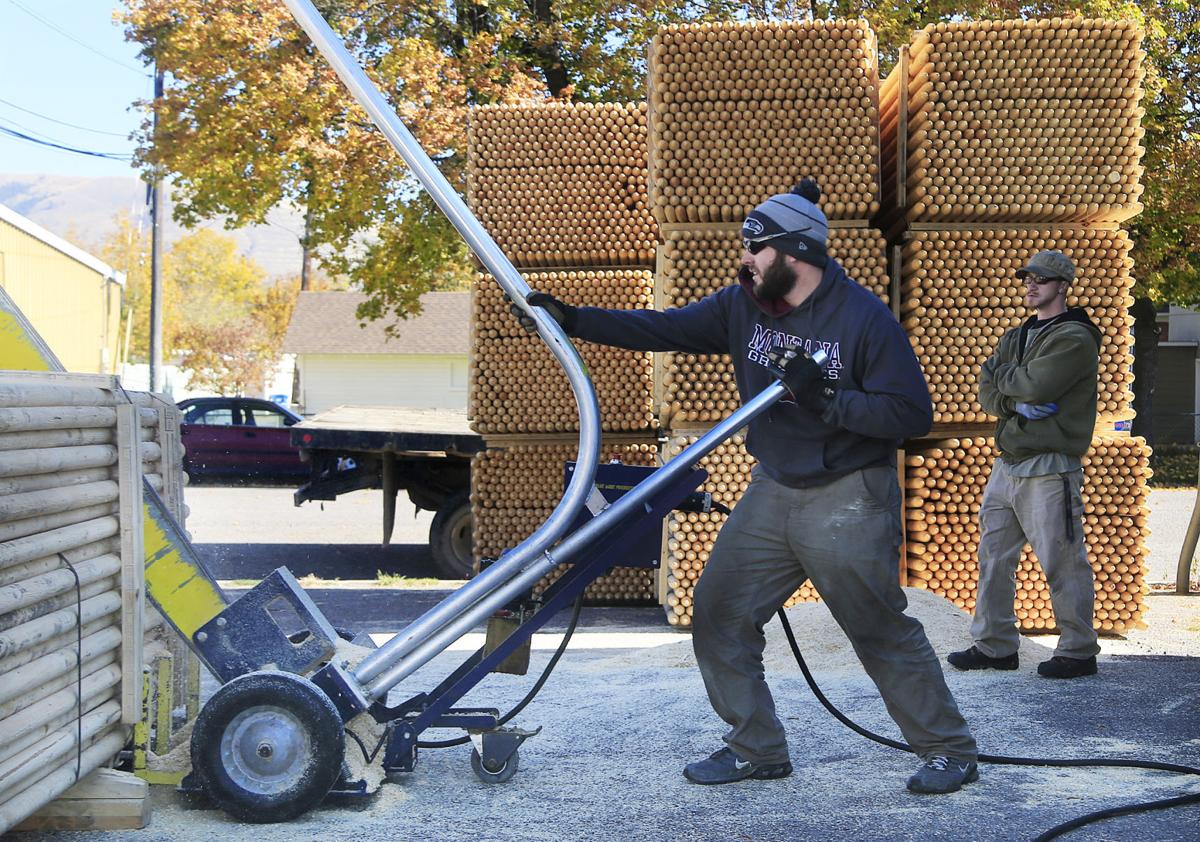 Steven Attleberger, 26, front, uses a saw to cut through tree stakes at the Opportunity Resources Inc. wood shop on Third Street last week as Larry Van Noy looks on. Attleberger has been working at ORI for five years, and he’s only had his pay increased once to about $10.50 an hour. 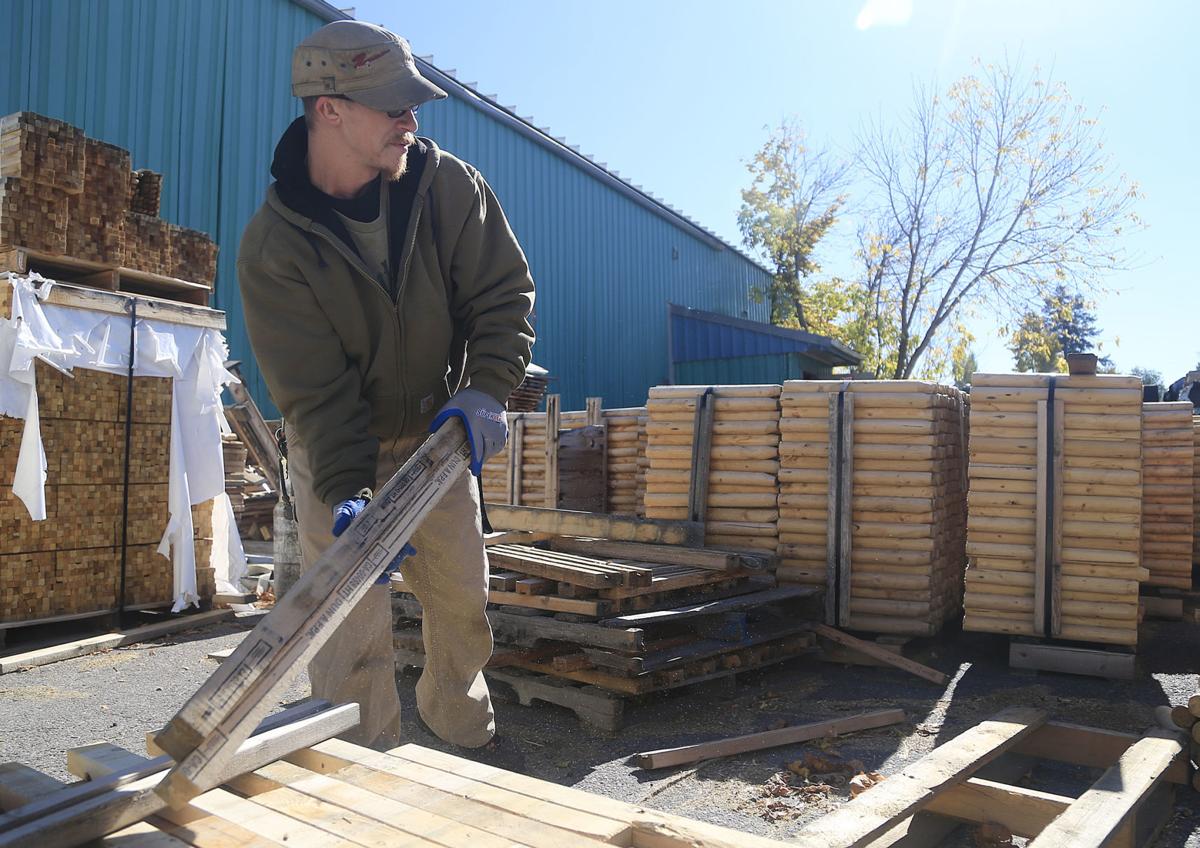 Larry Van Noy, a client of ORI, works at the nonprofit's wood shop on Third Street in the fall of 2016.

Due to a tight labor market and a lack of funding from the state, a local nonprofit is facing a severe shortage of workers to help people with disabilities.

“I hope people understand that we’re in a crisis,” says Ken Brown, the director of specialized services at Opportunity Resources Inc. in Missoula, which provides direct service to just over 700 individuals, and case management for another 800 people.

Brown is referring to the organization’s extreme difficulty in recruiting and retaining qualified direct support professionals, the people who supervise Opportunity’s clients and enable them to be fully engaged members of the community. Currently, Opportunity has a whopping 41 open positions for direct support providers, and while the turnover rate is still good compared to other similar organizations, it’s getting higher as people leave to find better-paying jobs.

The cause of the problem is simple. Opportunity’s budget is set by the state Legislature, and a significant wage increase hasn’t been approved in a long time. So most direct support providers are making around $10 an hour in Missoula, where the unemployment rate is between 3 percent and 3.5 percent and people can find better-paying jobs at fast food restaurants.

“You can make $12 an hour working at Burger King,” explained Jesse Dunn, Opportunity's CEO. “So while we’re competitive in this industry and in this market, it is not as attractive as working at some of the fast food places.”

“So every two years we go with a tin cup in hand to the Legislature and beg for pretty insignificant raises,” he said. “It really limits our ability to pay what individuals are worth in providing direct support. We try to mitigate that with a superb training program and flexibility in terms of work hours, and the rewards of providing this kind of service really attracts individuals who have good hearts and who have an orientation to do good in society.”

Dunn said a living wage in Missoula is around $15 an hour due to the cost of living here.

“There’s so many needs in the state that sometimes our voice gets lost,” Dunn said.

Steven Attleberger, 26, has been working at Opportunity for five years, and he’s only had his pay increased once, to about $10.50 an hour.

“It’s not livable, I tell you what,” he said. “I live paycheck to paycheck.”

Attleberger works at Opportunity’s wood shop on Third Street, where dozens of people with disabilities learn real-world carpentry and other skills that eventually could help them get jobs in the private sector. One of the main goals of Opportunity is to transition people to becoming more independent, and direct support providers like Attleberger play a crucial role. He isn’t just a boss – he treats everyone like his coworker and often takes trips to places like Glacier with Opportunity’s clients.

“Obviously, I’ve been here for five years, I love what I do,” he said. “I didn’t think I’d be in this kind of work, but I love working here. But I’d love to get a little more pay because then I’d stay. Because we’re losing a lot of staff, quick. Guys I’ve worked with since I first started here are starting to quit because they’ve got families and stuff to feed."

He loves the work, which is why he’s stayed so long, but the monthly rent for him and his fiancée is $950, not including utilities. That’s typical in Missoula, where housing prices have surged in the last couple years.

"It’s tough when it takes at least $14 an hour to live in Missoula and we’re getting paid $4 less than that an hour," he said. "It’s really hard to save money and do all that stuff.”

Larry Van Noy, a client of ORI, is one of the people Attleberger supervises at the wood shop. Van Noy has also been able to secure a job at a local Meineke auto shop as well.

He said that when there’s a lot of turnover in the direct support providers, it has a negative effect on him and his fellow coworkers. In fact, Van Noy has testified before the Legislature and intends to go back this January.

“The way that I see staffing leaving and coming and going, it’s, you know, it’s not only hard for me, it’s hard for others,” he said. “If we were able to find more staff, and upgrade the pay, we could get out and do more things.”

The lack of adequate staff means many direct support providers like Attleberger have to work weekends and overtime. Sometimes, they have to skip taking special trips like driving to Glacier because there simply aren’t enough supervisors to do it. For people with disabilities, missing those kinds of opportunities is devastating.

"When we’re not working, staffers go for drives with me or whatever and take other (clients) for drives or take them out to eat, and without staffing it’s much harder for us to get out and do things,” Van Noy said. “That’s one of the main goals of it, is to get us back out into the community. When we don’t have staff, I feel isolated. Isolation is not a good thing for anybody. So hopefully we will be able to achieve more staff with better pay.”

The situation is so grim that Opportunity recently had to sell one of its group homes because they couldn’t hire enough staff to maintain it. The lack of adequate staff also means people on waiting lists are denied service even when there is funding available. Due to an aging population, Dunn said that by 2022 more than a million new direct support provider positions will be open across the country.

Dunn said that the low unemployment rate means that there is an ever-dwindling pool of eligible job-seekers from which to draw.

“The individuals required to fill these positions have to have a certain skill set,” Dunn said. “They don’t have to be super-professionals, but they have to pass a background check because they are working with people who are vulnerable in many ways.”

Dunn emphasizes that Opportunity's clients are still getting the services they need despite the staffing levels.

“But the downside to that is when we’re thinly staffed there’s a lot of overtime work and people can burn out pretty easily,” he said. “But once we attract people, the working conditions are great, the benefits are good and we hang on to people.”

For people like Attleberger, the margin between his job satisfaction and his ability to afford to live on the pay is getting slimmer every month.

“It’s a great job, and I love it,” he said. “If you raised the pay a couple bucks, there would be tons of working here. You wouldn’t have to be stressing about bills.”

In the near future, a beautiful new campground and recreational center west of Missoula will serve a special purpose.

The organizers of the Missoula Marathon have committed to donating money to three local nonprofits, including one longtime organization that’s…

Steven Attleberger, 26, front, uses a saw to cut through tree stakes at the Opportunity Resources Inc. wood shop on Third Street last week as Larry Van Noy looks on. Attleberger has been working at ORI for five years, and he’s only had his pay increased once to about $10.50 an hour.

Larry Van Noy, a client of ORI, works at the nonprofit's wood shop on Third Street in the fall of 2016.