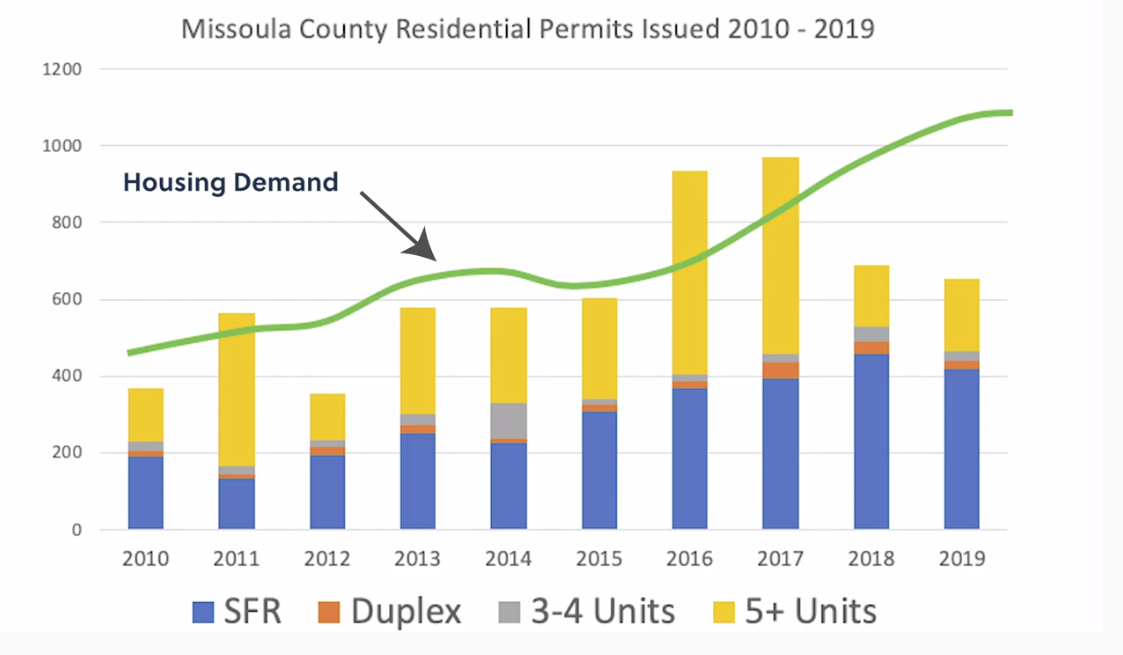 A slide from a Youtube presentation by Matt Mellott, a commercial real estate advisor in Missoula. 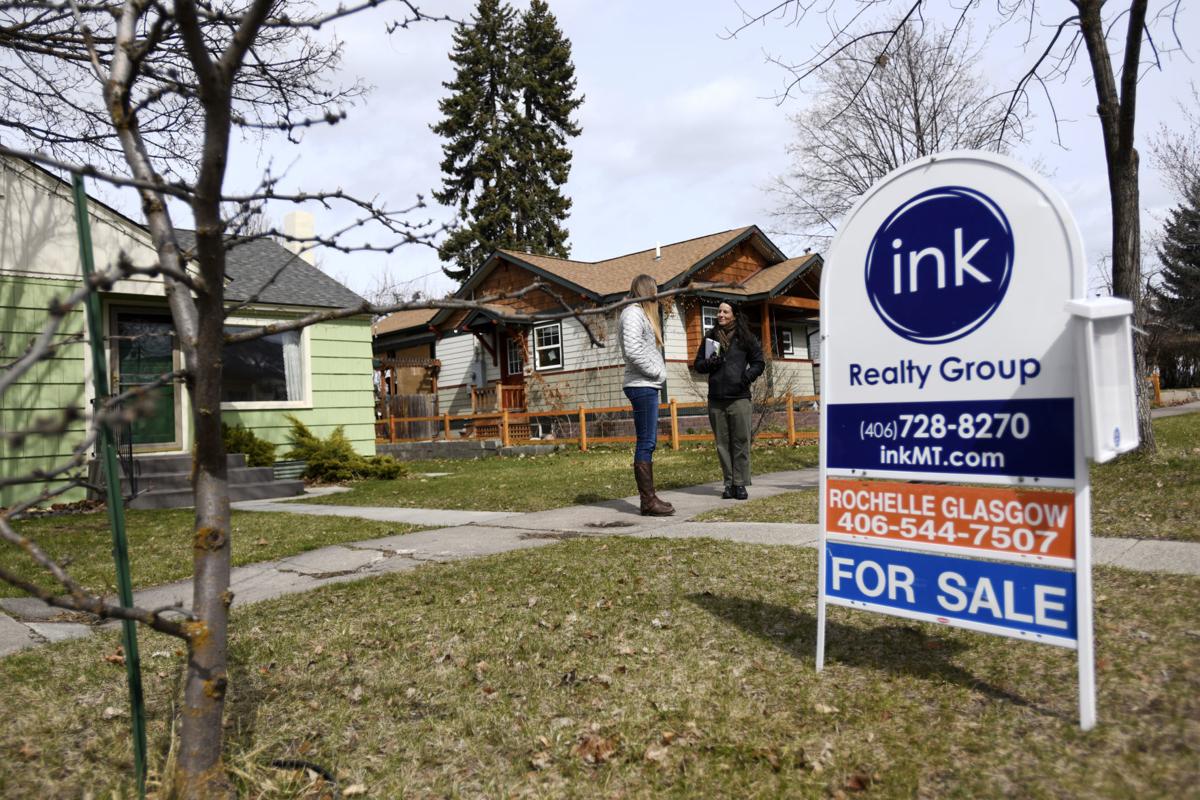 Local real estate professionals said they aren’t seeing a huge increase of out-of-state buyers seeking to move to Montana due to the relatively low numbers of coronavirus infections here, however.

“Anecdotally, it’s not like it started during the pandemic,” explained Brint Wahlberg of Windermere Real Estate in Missoula. He helps put together the annual industry reports for the Missoula Organization of Realtors.

“What’s been happening for the last couple years is people are moving into western Montana and other parts of Montana and they’re coming from other markets with substantially higher home values," he said. "This isn’t a new phenomenon in Missoula. We’ve seen this before. Data shows it’s Washington, California, Oregon, Colorado, Nevada and some other spots.”

People from those places sell their house there and come to Montana with “hundreds of thousands of dollars in cash in their pocket,” Wahlberg explained.

“That allows them to come into places like Missoula and it's much more affordable for them,” he said. “I’m working with two (clients) myself right now. One came out of California and one out of Florida. In both situations, one’s coming home and the other has family here, so it’s not just like, ‘I’m getting out of Florida and California because of COVID.'”

Wahlberg said he also hasn’t seen an increase in cash buyers suddenly expressing interest in coming to Montana during the pandemic.

“It’s a regular occurrence,” he said. “This tends to happen in our market.”

In fact, data from the local Multiple Listing Service shows that 33 of the 458 total residential sales in Missoula this year were all cash, which is 7.2%.

The same drop in percentage of cash sales has been recorded in the greater western Montana area as well.

The MLS doesn’t record huge down payments, and the Internal Revenue Service has stopped providing data on the locations from which people are moving to Missoula, so it’s unclear whether there’s been a spike in out-of-state buyers here. Wahlberg said low interest rates might be contributing to the drop in cash sales.

The climbing median sales price is attributable, as it has been for much of the last decade, to a lack of inventory relative to demand.

“It’s climbing quick again,” Walhberg said. “What happened was supply levels started to finally fix themselves at the beginning of the year, then COVID hit and supply dropped again because a lot of people opted not to list. But a lot of people, as our numbers show, want to buy homes and interest rates are low. So if the recession doesn’t impact them they still are trying to get out and get something, and that led to another supply crunch and bidding up.”

Melissa Huus, a Realtor with Exit Realty in Missoula, said she personally hasn’t had one out-of-state-buyer specifically mention Montana’s low coronavirus count as a reason for moving here. But she’s seen increased demand from out-of-state buyers over the last eight months.

“It’s been a goal of theirs for a long time to get away from growing metropolitan areas,” she said, describing a typical story from her clients. “When they originally bought, they were rural and now the suburbs are hitting them, or quality of life.”

She said one of her out-of-state clients bought in the $350,000 range but a few others were higher than that.

“The simple answer is that a bunch of greedy developers and Californians who can afford to make above-market cash offers swoop in and buy all the properties and make it unaffordable,” he joked in a Youtube video explaining rising housing prices. “But it’s not that simple.”

Mellott went on to say that since the end of the Great Recession, building permits for residential housing units have not kept pace with population growth and job creation in Missoula. He said that between 2010 and 2016, there were generally fewer units permitted than one would expect given population growth and average household size. Builders responded in 2016 and 2017 with a huge surge in development, which caused vacancy to spike and rents to go down. However, rising construction costs and land prices depressed building activity the past couple years, which leads to higher rent and housing prices.

David Passieri, a Realtor at Mission Valley Properties in St. Ignatius north of Missoula, has been in the business since 1989.

He said about 90% of potential clients are from out of the area. Of the ones who end up actually buying property in the Mission Valley, about half are from out of state, he said.

“I would say a lot of them are Missoulians wanting to get out of Missoula, mostly because of disdain with the governance of the city and higher taxes being discussed and taxed,” he said. “It has been that and traffic. Those are the ones that end up buying. Out-of-staters don’t know where they’re going to end up, so one out of 10 actually purchases.”

Passieri noted that many of his clients from Missoula still commute to work in Missoula. He said housing prices in the Mission Valley have risen about 3% a year since 2012, which is much lower than in Missoula, where housing prices have increased by nearly 60% since 2010.

New registry aims to cut down on stolen bikes in Missoula

Finally, a cross-jurisdictional bike registry is available for Missoulians.

Masks are required at the Clark Fork River Market and "strongly encouraged" at the Missoula Farmers' Market.

"The fundamental question is, is it a really a business or just a game that rich people play?" said Jim Valeo, who voted against using TIF for the bitcoin facility's fan blades.

The infected person had no known contact with a positive COVID-19 case, and no recent travel history outside the county.

A local church will move in, and future housing developments are in the design phase.

“... Ninety-five percent show up with a mask, they get it. But those who didn’t were annoyed and rude. It really took a toll on staff and made them feel terrible and erased all the good things."

"It's something that we're honored to be asked to participate in," said Tim O'Leary, who owns KettleHouse Brewing with his wife Suzy Rizza.

"I wanted to get involved and see where my food came from and just see the whole entire process from breeding to watching ‘em birth, watching ‘em grow up to seeing ‘em get cut up. I think it’s a wild process.”

A slide from a Youtube presentation by Matt Mellott, a commercial real estate advisor in Missoula.