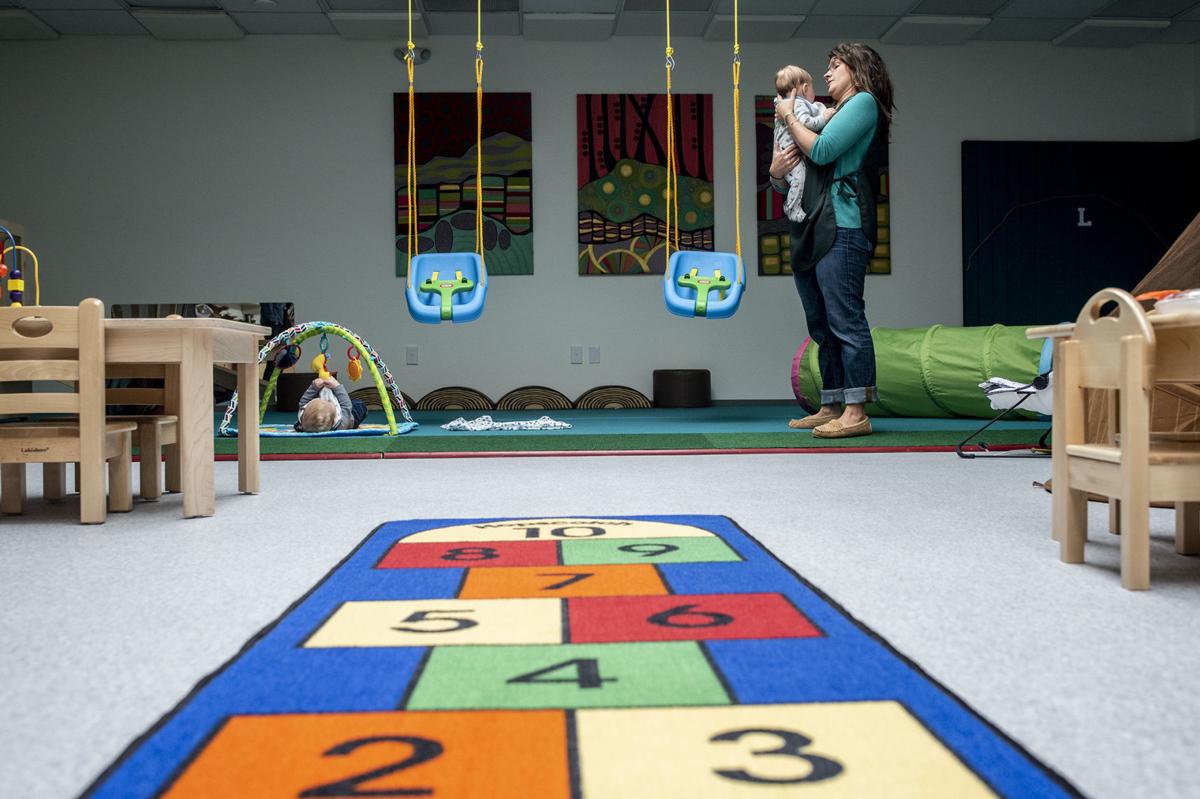 Katie Heckert holds an infant at the new learning facility inside the offices of Submittable in Missoula on Thursday. The company hopes to serve as a model for other businesses trying to address shortages in the workforce due to lack of infant care in Missoula. 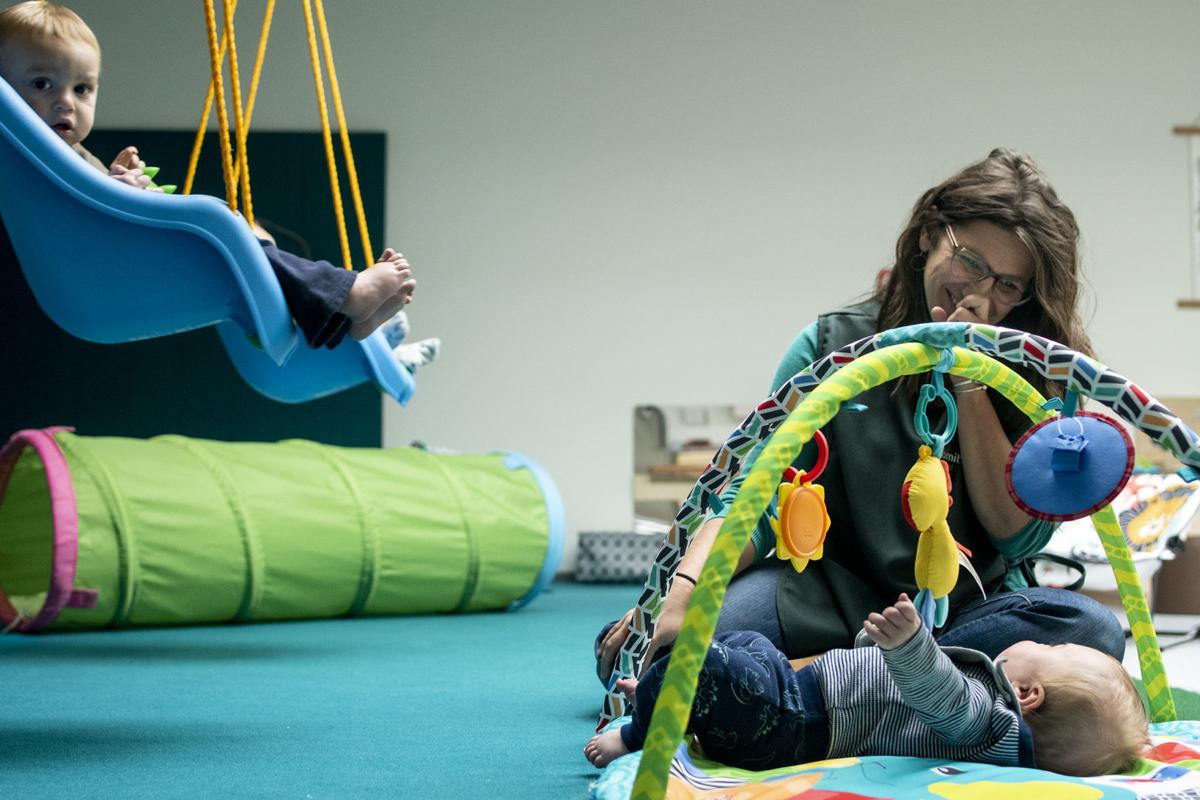 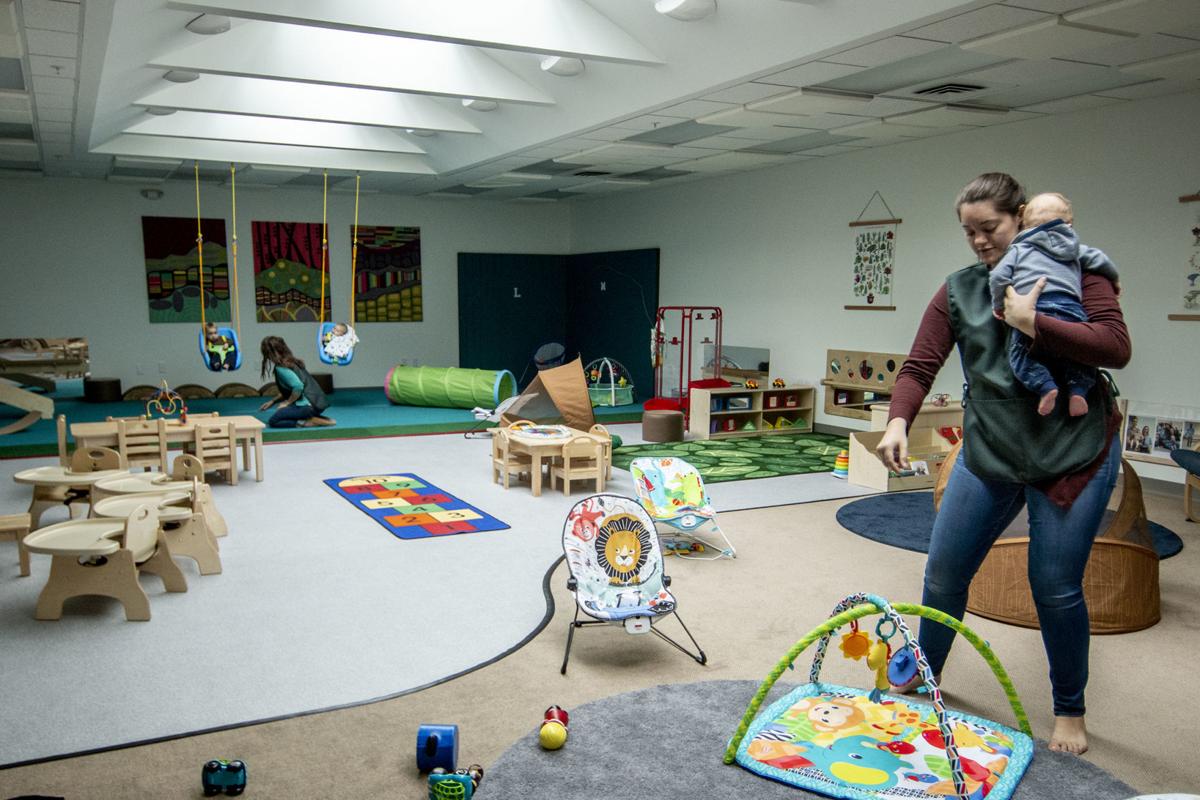 Ariel Kane cares for an infant in the new day care facility inside the offices of Submittable on Thursday. Many local businesses point to expensive child care as one of the leading causes of workforce shortages.

Katie Heckert holds an infant at the new learning facility inside the offices of Submittable in Missoula on Thursday. The company hopes to serve as a model for other businesses trying to address shortages in the workforce due to lack of infant care in Missoula.

Ariel Kane cares for an infant in the new day care facility inside the offices of Submittable on Thursday. Many local businesses point to expensive child care as one of the leading causes of workforce shortages.

A Missoula tech company has opened an in-house child care facility for its employees, and they’re hoping it can serve as a model for other businesses trying to address a workforce shortage partly exacerbated by the lack of infant care.

Submittable’s new Kid Care is a large, sunlit room staffed by four employees inside the Florence Building downtown. Already, staff cares for eight kids ages 0-2 in the space, where they have access to Caras Park nearby. Most importantly, though, their parents can drop in anytime.

With roughly 100 employees, Submittable is one of Missoula's fast-growing tech companies. The founders created a submission review platform now used by clients around the world including AT&T, New Belgium Brewing and National Geographic.

A survey completed earlier this year by the Missoula Area Chamber of Commerce found that infant care in Missoula cost an average of $819 a month. Many business leaders in Missoula have pointed to the high cost of child care as a reason why many parents are choosing to stay at home and leave the workforce, contributing to a shortage of employees here.

“It's such a big city problem, but we have it here,” Stainken explained.

Stainken and her husband were on a waiting list for 18 months at four different day care centers in Missoula when they had their first daughter. They had to pay for a nanny, and eventually her husband had to drop out of school because they just couldn’t find child care.

“We were just like piecing it together because we could never get her into a really quality center,” she recalled.

She and her fellow coworker Bracha Tenenbaum, who has a 1-year-old, went out to lunch recently and decided they were going to ask the company to open a day care.

Co-founders Michael Fitzgerald, John Brownell and Bruce Tribbensee were all for it.

“In the first six months I worked here, we still had less than 13 people, but I remember (Fitzgerald) said when we get big enough (an in-house child care facility) would be so cool,” Stainken recalled. “I never forgot it. We just thought maybe we’re big enough now. We talked at lunch and said 'let's go for it'.”

The parents pay a comparable market rate for the child care, and the day care employees get full Submittable benefits.

“It solves for availability,” Stainken said. “It doesn’t solve for affordability, not right now. But the other thing that’s so awesome is for breastfeeding moms. When you first come back to work, I can’t even explain the impact of that, being able to nurse your baby.”

Tenenbaum was able to celebrate her son Abe’s first birthday on Thursday at her office. She said the in-house care has been a game-changer in her life.

“Oh my gosh it's huge,” she said. “The drop off and pick up is so much easier. Yesterday I had to take him to a doctor appointment. That was a breeze.”

About half of the Submittable employees who have babies are men, Stainken added.

At Submittable, Stainken said they hired a consultant, Kelly Hess of the Missoula Food Bank, to come up with a budget and other logistics for the new center. Both Tenenbaum and Stainken said Submittable would be more than willing to help other businesses in town set up something similar.

"It takes a while to get all the right parts in place," Tenenbaum said. "I thought we could just use a spare room, and I could show up with my baby. It took time but it's possible."

This story has been updated to correct the number of children in the Submittable daycare.