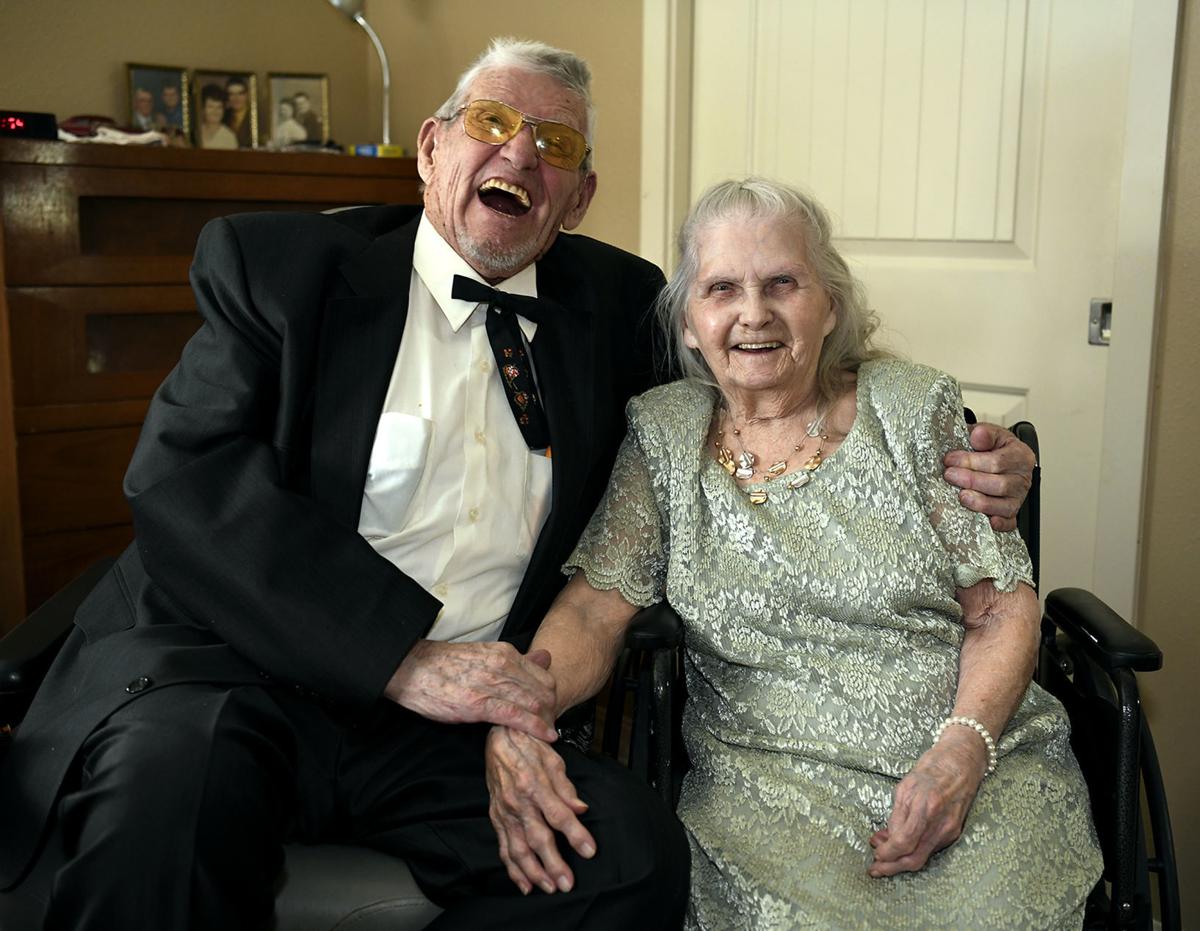 Ken and Ilene Schneider sit in one of their rooms Wednesday at BeeHive Homes of Missoula, where they'll celebrate their 75th wedding anniversary with a party on Sunday. "My wife is a very, very wonderful woman. Far more than I deserved," Ken said. 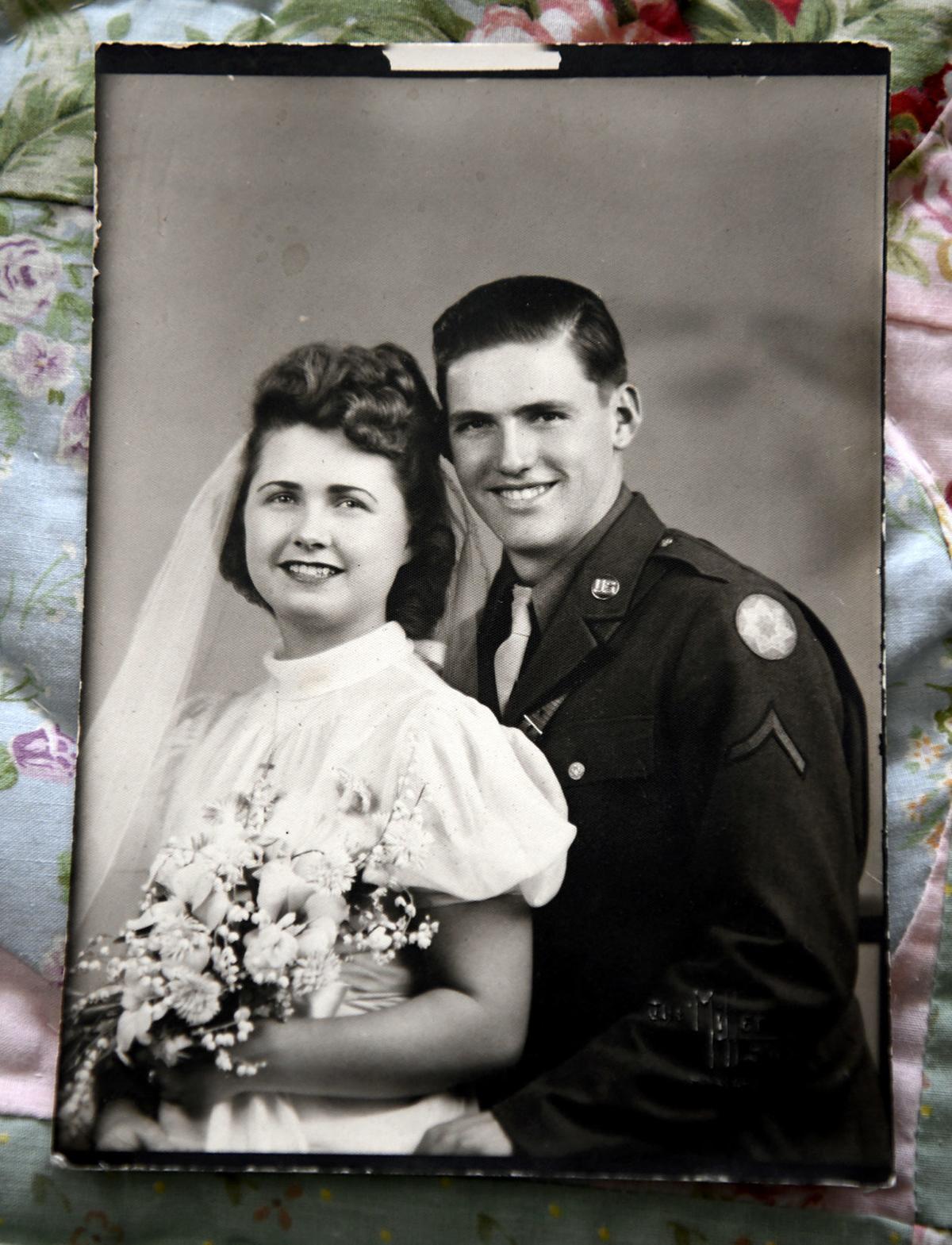 Ken and Ilene Schneider were married on Feb. 7, 1944, in Pierpont, South Dakota, when he was on a seven-day furlough from the Army. 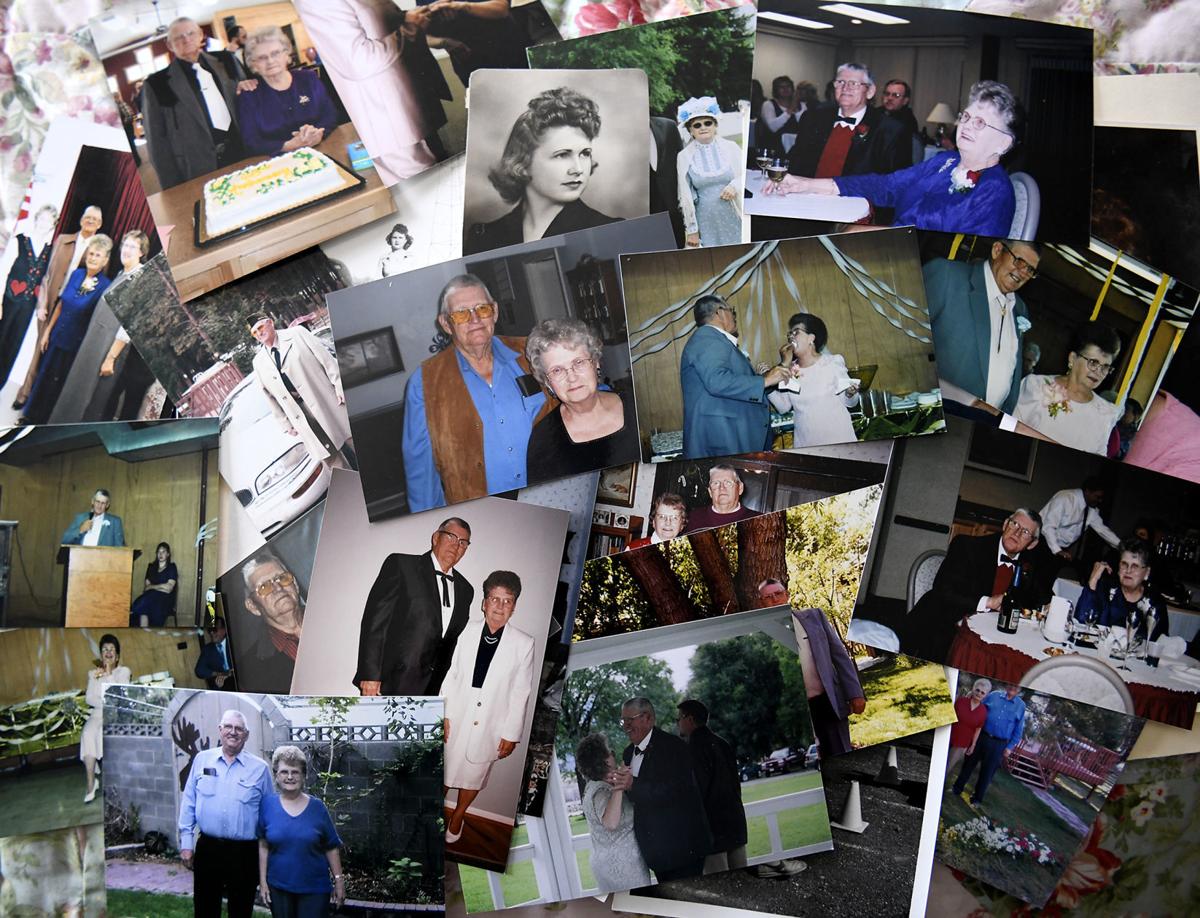 A lifetime's worth of anniversaries and memories is found in the Schneider family's photographs.

Ken and Ilene Schneider sit in one of their rooms Wednesday at BeeHive Homes of Missoula, where they'll celebrate their 75th wedding anniversary with a party on Sunday. "My wife is a very, very wonderful woman. Far more than I deserved," Ken said.

Ken and Ilene Schneider were married on Feb. 7, 1944, in Pierpont, South Dakota, when he was on a seven-day furlough from the Army.

A lifetime's worth of anniversaries and memories is found in the Schneider family's photographs.

Ken Schneider is still the happiest man in the world when his arm is around his wife.

He once sang Ilene a love song and gave her 50 roses, one for each year they’d been married.

That was a quarter of a century ago.

On Sunday, the Schneiders will be guests of honor at a family get-together at BeeHive Homes in west Missoula. They’ll be marking an occasion that’s exceedingly rare here or anywhere else: their 75th wedding anniversary.

“The only thing we can think to put 75 roses in is to wrap a bucket in tissue paper,” said Linda White, one of the Schneiders’ three children and the only one who won’t make it for cake and ice cream. She lives in Lolo but come winters she’s a snowbird nestled in Yuma, Arizona.

Son Bill Schneider, an outdoors writer and publisher, will be over from Helena. Daughter Laurie Lockridge will drive the 25 miles in from Potomac.

And once again Ilene, 93, will be serenaded with “Have I Told You Lately That I Love You?”

Ken, a World War II veteran, mechanic and one-time small town chief of police, practiced the song with the church pianist before their 50th anniversary in 1994 at the Veterans Community Hall in Bristol, South Dakota.

“People were filtering in off the street when they heard Kenny Schneider was singing,” Lockridge recalled. “I mean, mechanics, bar people, church people ... They were all like, ‘You’ve gotta hear this. Kenny Schneider is singing.’”

He’s still a wonderful singer, his wife insisted Wednesday, though Ken scoffs at the notion.

He has turned Sunday’s “Have I Told You Lately?” crooning duties over to a professional — the 1964 Jim Reeves version on CD of the 1945 lovers’ classic that has been covered by everyone from Bing Crosby and Anita Bryant to Elvis Presley, Patti Page and Rod Stewart.

Ken and Ilene sat side by side in wheelchairs on the eve of Valentine’s Day in his room at BeeHive. With only a little prompting he crooned a couple lines.

Have I told you lately that I love you?

“My wife is a very, very wonderful woman,” he said. “Far more than I deserved.”

They grew up in small towns 17 miles apart on the plains of northeastern South Dakota. Ilene Johnson was the daughter of a prominent farmer in Pierpont, Schneider the son of a Bristol policeman.

She was four years younger than he, just 15 when they started dating. When World War II broke out, Schneider tried three times to enlist.

“I had a bad left eye and they didn’t want me,” he said. “Then they came up with what they called a limited service program.”

Drafted into the Army, Schneider spent most of the next four years as a military policeman. He was at Fort Snelling, Minnesota, in early 1944 when the call came to ship out. His company first moved to Michigan, giving Schneider time to go home on a seven-day furlough. Before it was up, he was a married man at age 22. Ilene, who’d been teaching at a country school, was six weeks short of her 19th birthday.

They’d broached the matter, but when Ken arrived there was no set plan to get married.

“I wanted to, but I knew my folks weren’t going to like it,” Ilene said.

Ken had his own reservations.

Ilene prevailed, and they were wed on Feb. 7, 1944, in the parsonage in Pierpont.

Two weeks later he was off to war. Schneider spent the next 30 months in New Guinea, followed by a stint in the Philippines. It wasn't until nearly three years later that he was honorably discharged and the Schneiders settled into married life in South Dakota. There was heartbreak: Two children died in infancy.

Ilene became a bookkeeper, meanwhile developing a love and talent for art. Ken, a natural mechanic, worked in that field and others, including as a grain elevator operator and chief of the police department in Leola, South Dakota.

“I was going to stick to police work but soon changed my mind,” he said. “That’s the kind of life that don’t go with married life because you’re out all night, sleep all day.”

By 1971, the kids were mostly grown. When Bill got on with Montana Outdoors magazine, his parents were ready for a move west too.

They landed in Missoula where Ken worked for Otto’s Wrecking, then spent his last 10 working years fixing up police cars for the city of Missoula. Ilene kept the books for Bill Nooney’s Western Montana Co-Op.

They returned to South Dakota in 1982, but soon became “gypsies,” as their kids called them.

“We started out in a little Datsun pickup and, you know, it took us 14 years to get home,” Ken said.

In a succession of trailers and motor homes they toured the country buying, fixing and selling old jewelry.

“Mom would repair it and redo the clasps and then they’d resell it and display it better,” Lockridge said. “It paid for all their gas and food and they just kept going. We never knew where they were.”

It was a lifestyle that would test many marriages. Not the Schneiders'.

“We got along fine,” said Ken, who was into walleye fishing and hunting well into his 80s and loved to waltz. “We did things together, we went places together, we worked together. I think that’s what makes a marriage is when people learn to live together, not one going one way and one going the other.”

“We had our problems,” Ilene allowed. “I bent a little more than he did, but he always treated me great. He's been a good husband.”

“Mom was a pretty good equal until in later years when she couldn’t take good care of herself," Lockridge said.

In 2003 the Schneiders were back in Montana to stay, this time in Potomac with Lockridge and her family.

Her dad kept the entire Potomac Valley apprised of the goings-on, Lockridge said. He did all the snow plowing at home into his 90s. Ilene’s oil and water colors were displayed at shows and in galleries alongside Lockridge’s chainsaw carvings.

Three years ago, as that old outlaw Time caught up, they moved into Missoula. Last year Ken left Grizzly Peak to join Ilene at BeeHive Homes, where she’s in memory care.

“Oh, we did have a bump or two in the road, but basically we’ve probably had as good a marriage, and I have as good a family, as anybody could ask for,” Ken said. “Now we’re living in probably one of the nicest places in town, the BeeHive, and they do a good job of taking care of us.”

“They have an amazing ability to find happiness in all the small things that other people take for granted," daughters Lockridge and White wrote in a list of reasons why the marriage lasted 75 years.

“They never hang on to the sad or the bad; they seem to start every day all new again.

“They stick up for each other for whatever happened, even if the rest of the world knows it wasn’t true.

"They have the love of every child, grandchild and great-grandchild without question.”

The Schneiders are huggers, lovers and kissers, and they never lose faith.

Has Ken told Ilene lately that he loves her?

“Yeah, he has,” she answered with a shy smile.

“Would you believe,” he asked, “that I even said so today?”

Lawrence and Peggy Haas celebrated their 70th wedding anniversary on Feb. 7. They were married decades ago at St. Patrick Hospital, where Lawr…