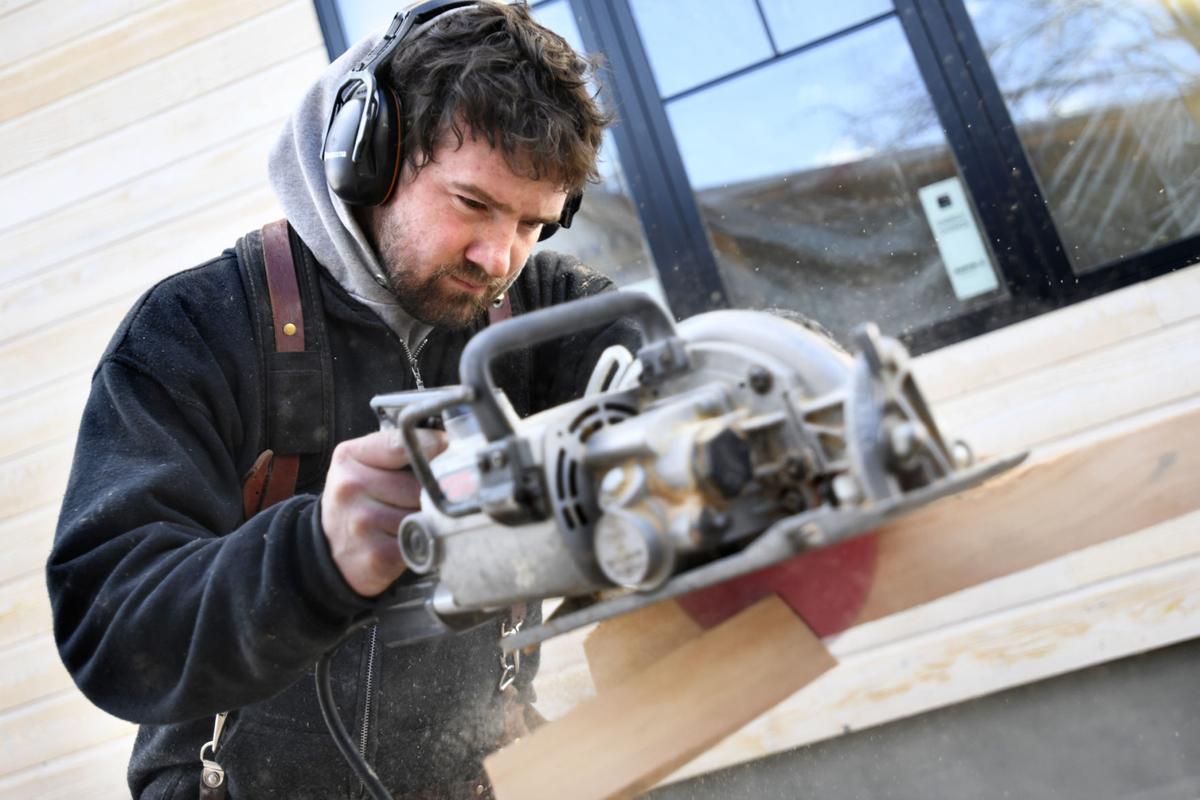 Caleb Lockyer, of Mast & Co. Builders, makes a cut on a board while working on a home near the University of Montana campus Monday afternoon. In Missoula, housing prices have risen nearly 30 percent since 2010, mainly due to a lack of housing supply. According to the Missoula Organization of Realtors, the median sales price of a home in Missoula right now is $273,000. The median sales price for the entire year of 2016 was $255,000. 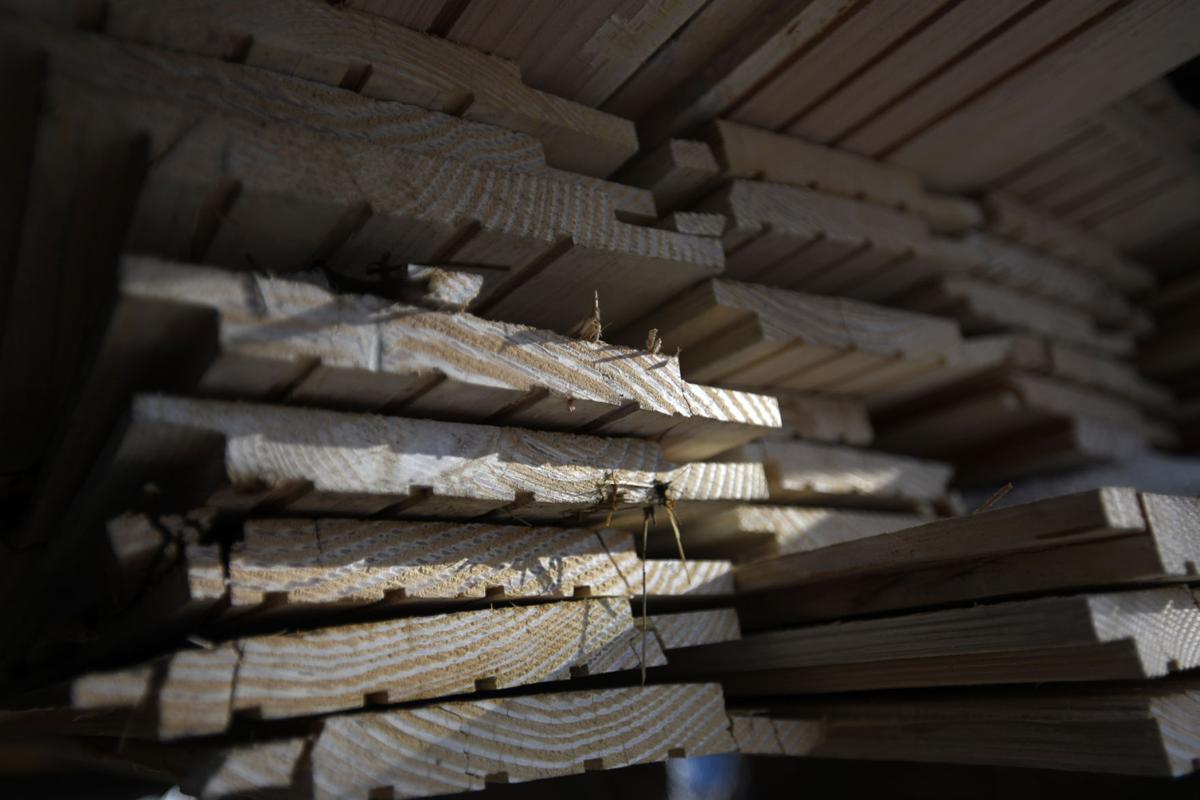 Just as there are two sides to every coin, the relatively high and stable prices for lumber over the past year have the Montana wood products industry happy — but home builders are frustrated because they have to pass on those costs to consumers in the midst of already lofty housing prices.

“Lumber prices right now are really high,” he said. “They went up at the beginning of 2017 and stayed consistently high. It’s a combination of a gradual increase in new home construction, which helped create more demand ,and fires through the West that restricted the supply of logs.”

At least one Missoula builder said those high prices for raw materials to construct houses contribute to the ever-soaring home prices here.

“Pricing fluctuates, but essentially the prices for materials are 25 percent more than a year ago,” said Wade Hoyt of Hoyt Homes in Missoula. “Materials is one item in a list of 60 we price in to the list price of a house. But due to price increases, the cost of a home right now is 17-18 percent higher than it was a year ago.

Loren Rose, the Chief Operating Officer of Pyramid Mountain Lumber in Seeley Lake, said lumber accounts for about 5 percent of a home's cost.

“Right now there’s a shortage of product (houses),” Hoyt said. “Realtors are asking for more, and home builders are trying to fill it. But there’s a lot of shortage because of topography. The average lot is between $85,000 and $90,000 so it’s hard to do an entry-level home at that lot price.”

“Two years ago I was doing some multi-family stuff for $100 a square foot, and now it's $130 a square foot, (at least) I’m hoping it’s $130 per square foot,” he said. “Labor costs are going up, and subcontractors are having to pay more to keep help. All the commercial work has robbed the labor pool. Everybody’s busy so there’s not an extra body to be had. It takes longer to do a project now.”

Hoyt said the price for OSB (oriented strand board), a widely used building product similar to particle board, has quadrupled since the beginning of 2016.

“That’s directly reflected to the flooding in Houston and the hurricane in Florida and California with the fires,” he said. “Every time a big disaster hits, building materials go to those places first. Everything that comes into Montana comes in by truck or train. We don’t manufacture much here.”

“Last year was probably as busy as I’ve seen,” said Hoyt, who has 40 years of experience in the industry. “I don’t know if it’s going to be the same this year, but every indication says it is.”

For Hoyt, the fact that the United States re-installed tariffs and countervailing duties on imported Canadian softwood is bad news, because that means Canadian lumber isn’t relatively cheap anymore.

However, that has been great news for the timber industry in Montana, according to Julia Altemus, the executive director of the Montana Wood Products Association.

“Prices (for lumber) remain stable and they are higher than they have been,” she said. “Lumber prices have improved. The tariff and the countervailing duty that the Department of Commerce put on Canadian mills has definitely helped keep lumber prices high. They are still dumping across the border, but it’s not as bad as it was. Canadians are still making money because our dollar is stronger.”

Altemus said lumber prices are higher than they were last year.

“Having stability for prices is really good,” she said. “We are still not at full capacity. Timber mills in Montana are still at 60-70 percent of capacity. Some of the salvage projects that are coming on will help that, so we should see an increase.”

Altemus estimates that Montana's timber industry, most of it in the western part of the state, employs 7,300 people.

Last summer's devastating wildfire season, and how communities can decrease the risk of such catastrophic fires, was the focus of “Rising From…

Tourism is a vital part of the economy in western Montana during the summer, and the wildfires that have caused closures of popular roads, lak…

Missoula is slowly chipping away at a chronic lack of affordable housing, although housing prices versus incomes here are still worse than in …

A court order to redact and submit for release a student-athlete’s disciplinary records would set a “dangerous precedent” for citizens, accord…

The median sales price of a home in Missoula went up roughly 5.1 percent last year to a record $268,250, which means a family would need an in…

The Forest Service’s Northern Region is proposing to log less than one half of 1 percent of the 700,000 acres of national forest lands that bu…

Over the past 25 years, the rate in the growth of both housing prices and population in Montana has been faster than the national average. Mis…

Based on the relationship between home prices and building permits over time, a duo of economists at the University of Montana has found littl…

Pyramid Mountain Lumber is applying for a state grant to hire six additional people to help with its transition to new technology.

Caleb Lockyer, of Mast & Co. Builders, makes a cut on a board while working on a home near the University of Montana campus Monday afternoon. In Missoula, housing prices have risen nearly 30 percent since 2010, mainly due to a lack of housing supply. According to the Missoula Organization of Realtors, the median sales price of a home in Missoula right now is $273,000. The median sales price for the entire year of 2016 was $255,000.