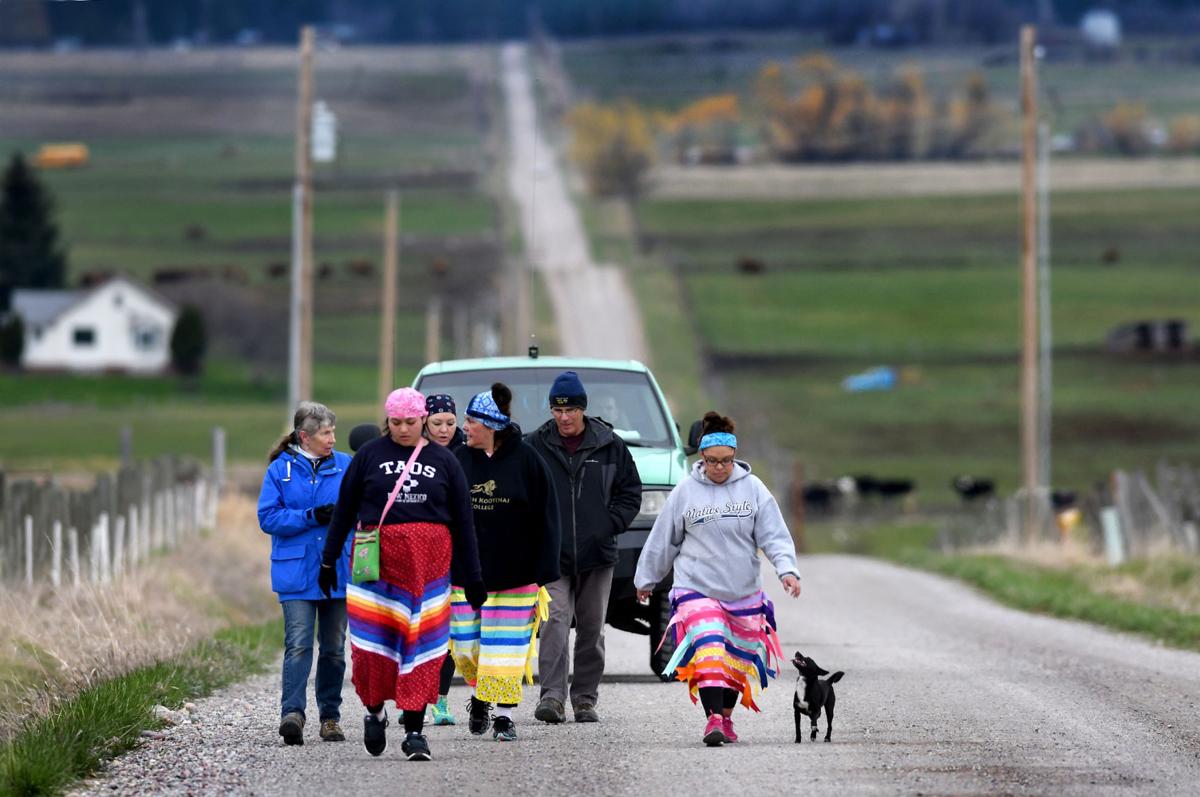 Marita GrowingThunder, second from left, walks Monday morning with Alex Wright, left, Sunday Plant, Shannon GrowingThunder, Daniel Hart and Briana Lamb and her dog Benny along Hillside Road between Ronan and St. Ignatius in a march across the Flathead Indian Reservation to raise awareness for missing and murdered Indigenous women. The walk began Saturday in Rollins and will end Tuesday in Arlee. 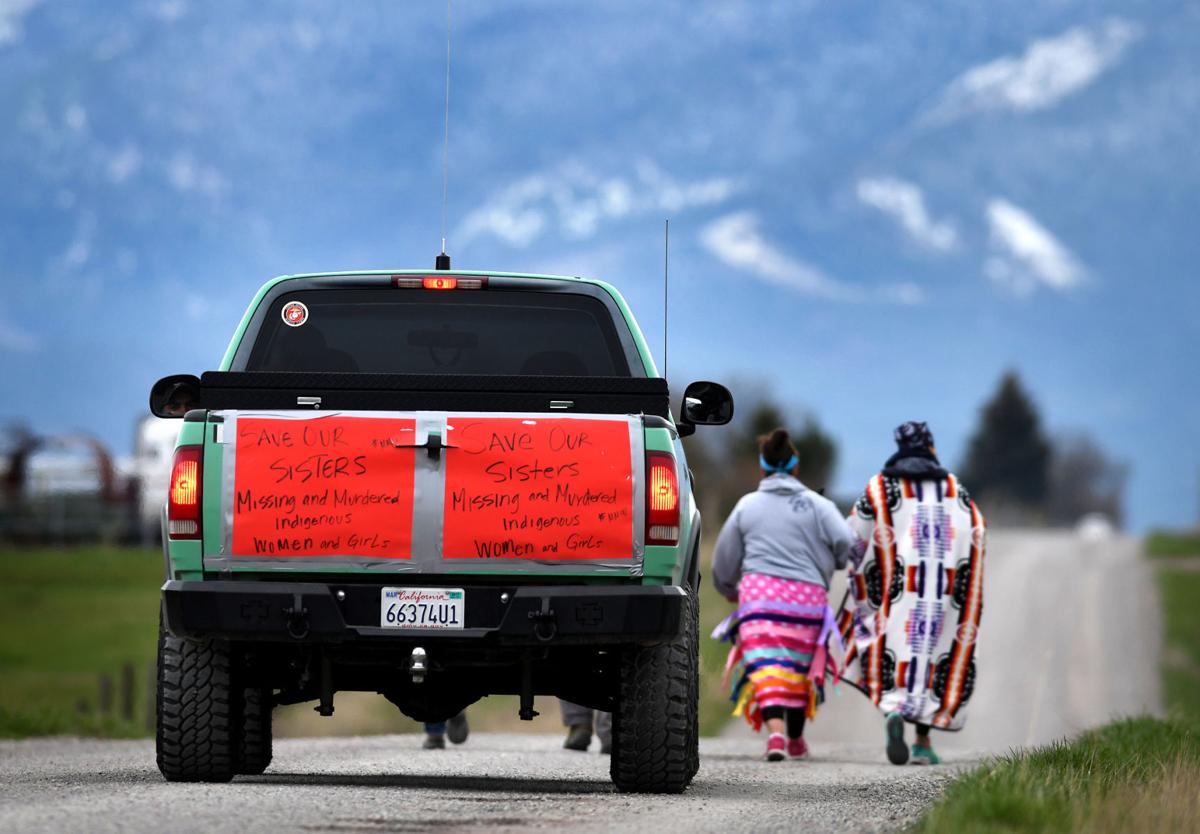 "I want Native women to be aware," says Marita GrowingThunder, "to protect themselves because they are vulnerable."

Marita GrowingThunder, second from left, walks Monday morning with Alex Wright, left, Sunday Plant, Shannon GrowingThunder, Daniel Hart and Briana Lamb and her dog Benny along Hillside Road between Ronan and St. Ignatius in a march across the Flathead Indian Reservation to raise awareness for missing and murdered Indigenous women. The walk began Saturday in Rollins and will end Tuesday in Arlee.

"I want Native women to be aware," says Marita GrowingThunder, "to protect themselves because they are vulnerable."

ST. IGNATIUS — Marita GrowingThunder has spent the year raising awareness about missing and murdered Native American women with her hands. This weekend, she added her feet to the cause.

The Polson High School senior began walking across the Flathead Indian Reservation Saturday morning. Monday, she had about 15 miles to go before she would be done.

GrowingThunder, along with her friends and family, will have walked just under 75 miles in four days by the time they reach Arlee Tuesday evening.

GrowingThunder grew up hearing the stories of women murdered within her own family. Since she was a child, she has known about the violence Indigenous women face in their lives.

"I want Native women to be aware, to protect themselves, because they are vulnerable," she said.

GrowingThunder has worked throughout her senior year to bring awareness to the problem of violence against Indigenous women. She has sewn a new dress almost every night in honor of either a murdered or missing Indigenous woman.

Her work came out of an arts advocacy project she developed over the summer at the Center for Creative Youth at Wesleyan University in Middletown, Connecticut. She's gotten donations from across the world for her project and posts photos on her Facebook page of the dresses, along with the names of some of the women she has honored.

In Montana, where Native American women make up about 3 percent of the overall population, they made up about 6 percent of homicide victims between 2011 and 2015, according to the Montana Department of Public Health and Human Services' 2015 vital statistics report.

White women make up about 44.5 percent of Montana's population, but accounted for about 21 percent of homicide victimes between 2011 and 2015.

Sunday Plant, who marched with GrowingThunder Monday, said she has known at least two women in her family who were murdered.

Plant's eldest daughter, now attending college in New Mexico, is friends with GrowingThunder. Plant said she was walking in part for her.

Raising her two daughters, the fear of violence against them was never far from her mind, Plant said. When her eldest daughter left for college, she made her get GPS on her phone. "So I'd always know where she was," Plant said.

Briana Lamb, 28, walked with her dog, Benny. Lamb has followed what Canada has done in the past year to try to better understand and address the death and disappearances of the country's indigenous women.

The Missing and Murdered Indigenous Women and Girls movement began in Canada about 20 years ago, Lamb said. It wasn't until December 2015 that the Canadian government established a commission to launch an inquiry into the situation.

The commission was given a budget of more than $50 million (Canadian) and is expected to release a final report on its findings in 2018. Nothing like it exists in the U.S., Lamb said.

The number of marchers ranged from three to 30 people over the first three days of the march. It started at 7:30 a.m. Saturday at the Flathead reservation sign, just outside Dayton. The group covered about 20 miles on the first day, walking south on U.S. Highway 93 until they reached Polson.

On the second day of the march, GrowingThunder rode horseback while the rest of the group walked beside her. People honked and some flipped her off, GrowingThunder said, citing racism in Polson.

The group continued on to Ronan, where the second day of the march ended. By Monday morning, the group had made it to St. Ignatius and marchers planned to finish their day at the St. Ignatius Mission.

Tuesday, the group plans to reach Arlee, where the march will be concluded with a prayer.

Dr. Annjeanette Belcourt is an American Indian Assistant Professor in the College of Health Professions and Biomedical Sciences at the University of Montana. Belcourt has studied the impact of trauma and resiliency within tribal communities.

People have grown more aware in the last decade of the issue of violence against all women, Belcourt said. Still, there is always room for improvement when it comes to the prevention of violence in all communities.

"It is a crucial question, what can we do?" Belcourt said.

What GrowingThunder has done is courageous, Belcourt said. The persistence she has shown, making a dress everyday to honor these women is admirable and helps survivors, Belcourt said. Belcourt's own sister was shot and killed in 2001.

"Speaking as a family member of someone who was murdered, it is meaningful to see a young person do something that is cultural and very respectful," Belcourt said.

Belcourt is an enrolled member of the Three Affiliated Tribes and grew up on the Blackfeet Indian Reservation.

When Belcourt's sister died, her family turned to their culture for comfort and healing. She sees GrowingThunder sewing ceremonial dresses in honor of those who have been murdered or are missing women as a powerful example of native resilience.

"It is like a healing ceremony for the community," Belcourt said.

POLSON – The first name you’re going to read in this story is Lakota Rae Renville.