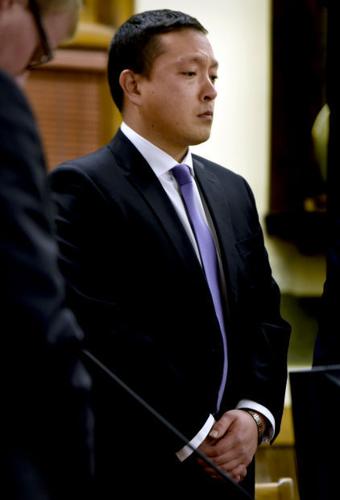 Markus Kaarma listens Wednesday as he is declared guilty of deliberate homicide by a Missoula District Court jury in the shooting death of Diren Dede in Kaarma's garage last spring. 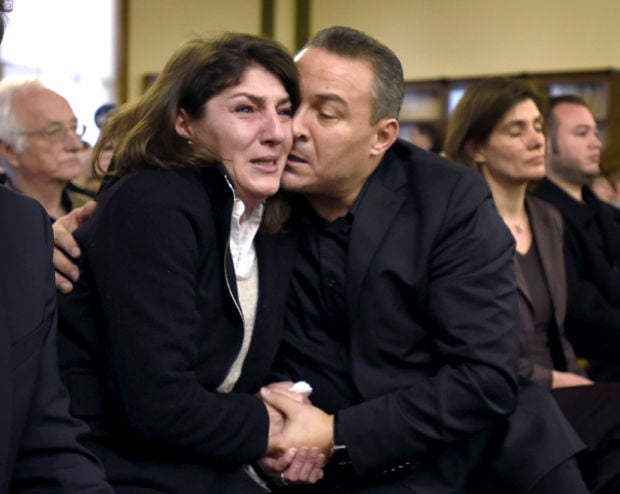 Gulcin and Celal Dede embrace following the guilty verdict against Marcus Kaarma who was convicted of deliberate homicide for the killing of their 17-year-old son Diren last April. 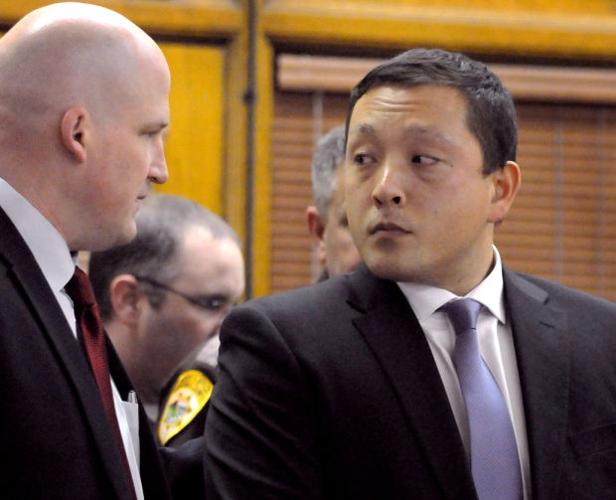 Markus Kaarma talks with his attorney Brian Smith before being escorted from Missoula District Court Thursday after he was convicted of deliberate homicide in the shooting death of Diren Dede last April. 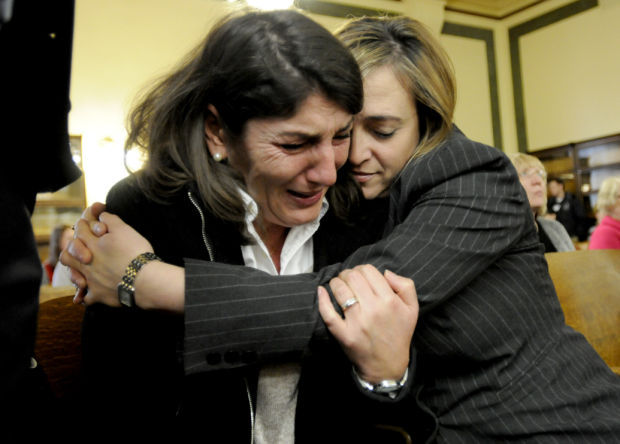 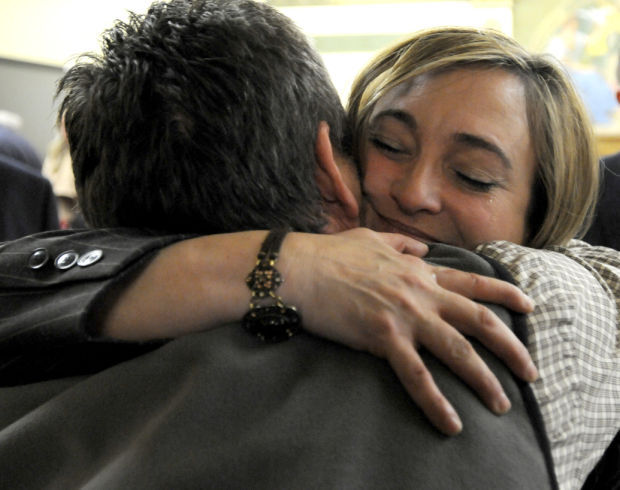 With tears streaming down her cheek, Deputy County Attorney Jennifer Clark embraces a supporter after the verdict. 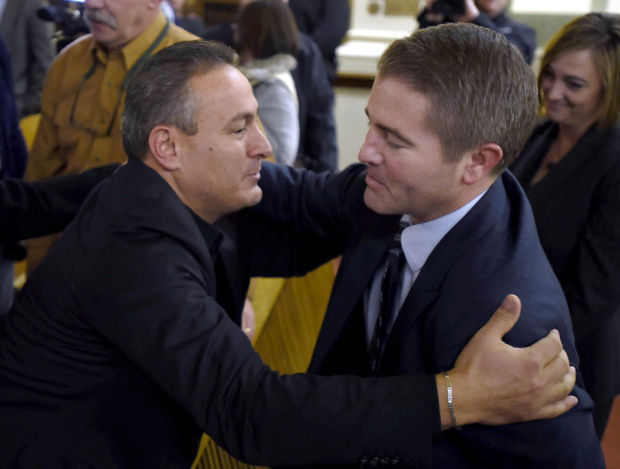 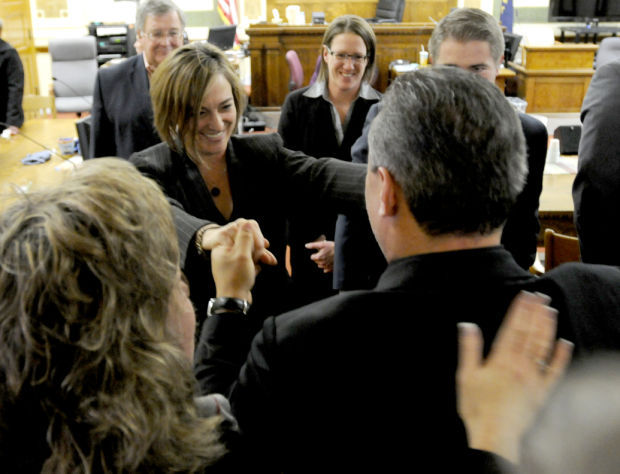 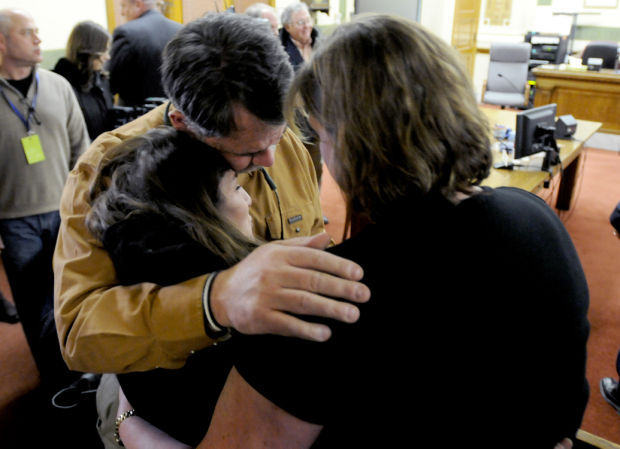 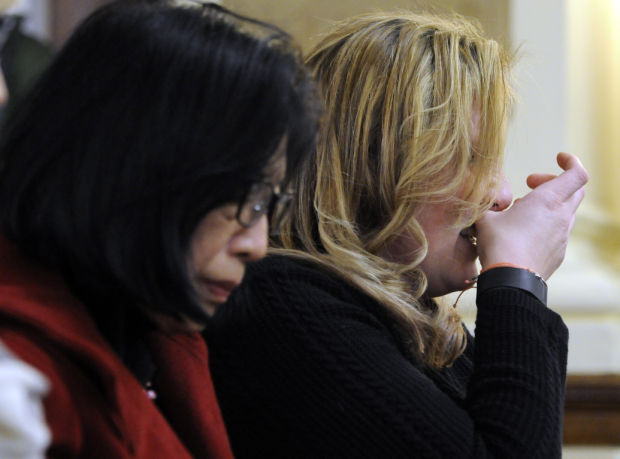 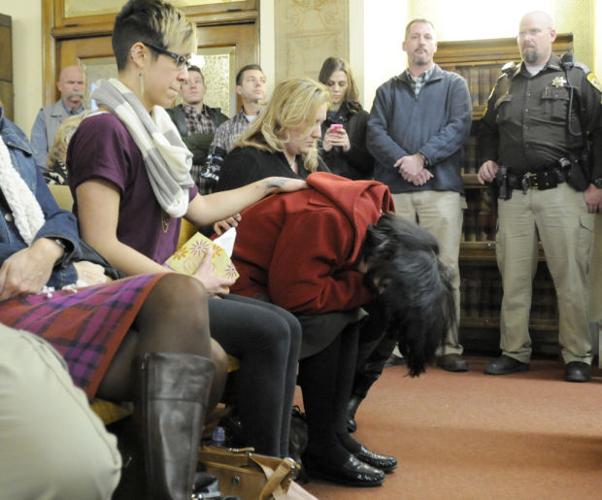 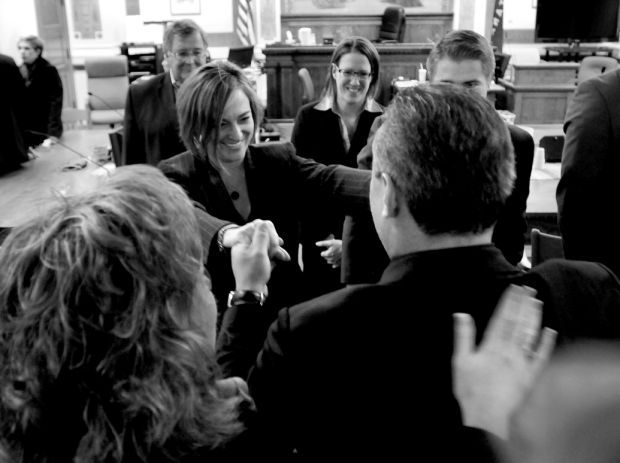 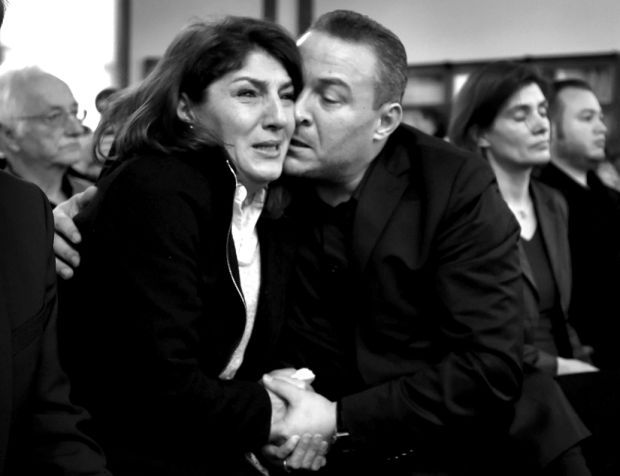 Gulcin and Celal Dede embrace in Missoula District Court on Wednesday as the jury's guilty verdict is read convicting Markus Kaarma of deliberate homicide in the death of their son, Diren. 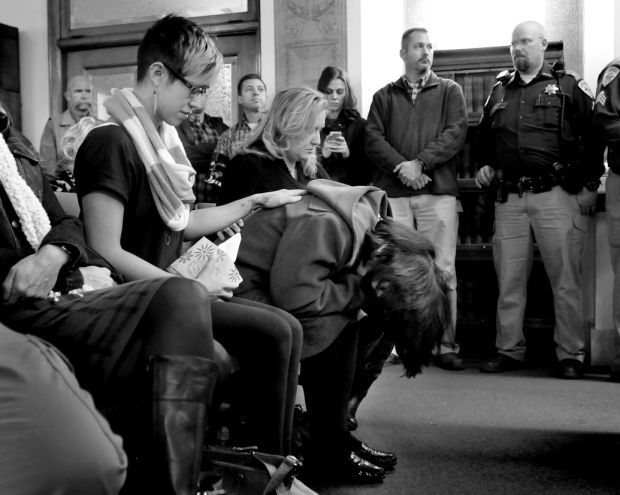 A collective cry erupted on the third floor of the Missoula County Courthouse on Wednesday as a jury of eight women and four men found Markus Hendrik Kaarma guilty of deliberate homicide.

The courtroom's enthusiasm for the verdict was tempered by sobs coming from Kaarma’s mother, Chong Oak Kaarma.

“Oh, no,” she cried, leaning forward in her chair.

Dede’s parents, Celal and Gulcin, held each other – crying tears of joy as the verdict was read. They continued to hold one another after the jury was dismissed.

“Diren, we made it,” Gulcin cried in German while hugging friends in the courtroom.

“Long live justice,” Celal said. “This is very good. I don’t know what else to say. Thank for all. Thank you for Montana.”

Dede was taking a late-night walk through his host family's Grant Creek neighborhood when Kaarma confronted him in the darkened garage – shooting Dede twice with a shotgun. One shot hit the boy's arm, and was survivable. The second, fatal shot hit him in the head.

Kaarma cried quietly as the jury entered the courtroom and continued to cry as the verdict was read.

He was escorted out of the courtroom by a Missoula County sheriff’s deputy and one of his attorneys, Brian Smith, after District Judge Ed McLean remanded him to the Missoula County jail to await sentencing Feb. 11.

Dede’s parents will give a victim’s impact statement in the courtroom and McLean will set bail for Kaarma on Thursday at 10 a.m. Under state sentencing guidelines, Kaarma faces prison time of "not less than 10 years and not more than 100."

Randy Smith and Kate Walker – Dede’s Missoula host parents – were also crying in the courtroom. Walker, who testified that Dede was a joy to host and reported never having any conflicts with him, was overwhelmed with emotion.

“Obviously, we feel good about the verdict,” he said. “Justice was done. There’s no way you can undo all the pain that was caused by so many people, but maybe this is a time to start over.”

"At this point, we're obviously disappointed with the decision, and we'll continue to fight this until we feel that justice is served for Markus Kaarma," Ryan said.

He anticipates lawyers will file the appeal as court procedures dictate, likely several months after sentencing. They will base it in part on "a number of procedural issues that we just think were not addressed properly that need to be looked at by the (Montana) Supreme Court."

"We're still analyzing those kinds of things. Obviously, it's pretty raw and fresh for us today," Ryan said.

As the attorneys left a packed courthouse, Smith walked with his arm around Kaarma’s mother.

Defense lawyers presented a relatively short case. They called only a few witnesses and rested after a couple of days.

A variety of decisions – both strategic ones by the team and decisions by the court – led to the defense's presentation, Ryan said Wednesday.

Once the lawyers digested the outcome, he said, they would take time later to review their case to see where it may have fallen short.

Wednesday’s verdict came after several weeks of trial and months of international media attention – with both the German media and the German government following the trial’s progress.

German attorney Andreas Thiel and German Consul Ulrike Julia Reinhardt accompanied Dede’s parents for part of the trial and were present Wednesday when the guilty verdict was read.

“We hoped for it and we prayed for it, and actually I expected it after yesterday, but I was insecure after hours of waiting,” Thiel told the Missoulian moments after hearing the jurors' decision.

He said Dede's parents needed the guilty verdict so they could attempt to find some peace and closure for the loss of their son.

“It’s the biggest relief they can have,” Thiel explained. “Now they can resolve … their grief. It was the main mission for them to come here and see the man who shot their son … get a guilty verdict.”

Reinhardt said the citizens of Missoula have been warm and welcoming to Dede’s parents.

“The German government would like to thank all the people involved in the trial,” she said. “We are particularly impressed by the outpouring of sympathy and compassion that the parents of Diren experienced here in the last weeks.”

Kaarma’s partner, Janelle Pflager, refused to comment after the conviction, while prosecutors said they would comment after Thursday's hearing.

Jurors began their deliberations Tuesday afternoon after defense attorneys and prosecutors made their final arguments in a packed and tension-filled courtroom.

Kaarma’s five-member defense team argued that he shot Dede in self-defense after a ring of teenage burglars targeted his home. Ryan gave the closing arguments Tuesday, indicating that Dede had every intention of stealing possessions from Kaarma’s garage when he went out for a walk with his friend and fellow exchange student, Robby Pazmino, that evening.

“What he was doing was going to violate the sanctity of someone’s home,” Ryan said. “He has no business being where he’s at. He’s up to no good. He’s looking to go stealing something.”

He suggested Dede, Pazmino and a third unidentified person were involved in an orchestrated attempt to burglarize Kaarma’s home, using testimony from a neighbor who told the court that he observed an “exodus” of cars from the neighborhood after the shooting.

The defense also attempted to paint a portrait of a botched police investigation, and Ryan quizzed many police officers, including lead detective Guy Baker, about apparent lapses at the scene and his own qualifications.

After the verdict, Baker said he had faith in the investigation all along. He also said he aims to improve police work in every instance.

"With any investigation, I think hindsight is 20-20, and you can reflect and try to improve for the next time, and not just with this case," Baker said.

Prosecutors contended Kaarma premeditated the shooting, and that he and Pflager set a trap to ensnare would-be burglars in their garage.

They argued Dede was only taking a walk with his best friend Pazmino, who testified that he didn’t know what Dede was doing when he slipped into Kaarma’s partially open garage.

“The only person who rushed to judgment was the defendant," Deputy County Attorney Karla Painter said in her closing argument. "The only person that was targeted was Mr. Dede. He didn’t need to die on April 27. Was he somewhere he shouldn’t have been? Yes. Was he considering taking something he shouldn’t have? Probably. Did he deserve to die for (teenage) transgressions?

"Instead Diren, an unarmed child, was violently and senselessly executed. Please tell the defendant and Mr. and Mrs. Dede though we live in a state with a strong gun culture, it is not one of lawlessness," she continued. "Please tell Mr. and Mrs. Dede that Diren’s life was worth more than a couple cans of beer. Please find him guilty."

Join the Missoulian for live coverage, via Twitter, from Missoula County District Court. A bail hearing and victim testimony is expected to be…

Diren Dede's parents told a packed courtroom Thursday that their son's death at the hands of a Missoula man left them broken-hearted, and their lives destroyed. The man convicted of the teenager's murder responded with an apology for the fatal shooting last April 27 - and the pain it caused Celal and Gulcin Dede.

Janelle Pflager, the partner of the Missoula man who was convicted of murdering a teenage exchange student this week, will not face charges.

Gulcin Dede got the call on a Sunday morning. Her only son and youngest child, Diren, had been shot and killed.

Missoula man with violent past accused of knife attack

A Missoula man faces $50,000 bail on felony charges of burglary and assault with a weapon after allegedly going to another man's home and atta…

Markus Kaarma, convicted last week of murdering a 17-year-old exchange student in his Grant Creek garage, will ask for release on bail at a Ch…

Markus Kaarma was denied bail Wednesday and will be held in Missoula County jail awaiting sentencing for his deliberate homicide conviction.

Prosecutors: New Kaarma trial would be 'miscarriage of justice'

Prosecutors said Friday it would be a miscarriage of justice to set aside the guilty verdict in the December homicide trial of Markus Kaarma, …

Markus Kaarma, the Missoula man convicted of murdering a German exchange student in his garage, has settled a civil lawsuit filed by the victi…

The killing in Missoula of Diren Dede is on the radar of exchange programs in Montana and the foreign students they would court.

Coming to an early end, Markus Kaarma’s attorneys rested their case Monday morning after showing a brief video of Kaarma crying upon learning …

Photos from the Markus Kaarma trial

Markus Kaarma listens Wednesday as he is declared guilty of deliberate homicide by a Missoula District Court jury in the shooting death of Diren Dede in Kaarma's garage last spring.

Gulcin and Celal Dede embrace following the guilty verdict against Marcus Kaarma who was convicted of deliberate homicide for the killing of their 17-year-old son Diren last April.

Markus Kaarma talks with his attorney Brian Smith before being escorted from Missoula District Court Thursday after he was convicted of deliberate homicide in the shooting death of Diren Dede last April.

With tears streaming down her cheek, Deputy County Attorney Jennifer Clark embraces a supporter after the verdict.

Gulcin and Celal Dede embrace in Missoula District Court on Wednesday as the jury's guilty verdict is read convicting Markus Kaarma of deliberate homicide in the death of their son, Diren.