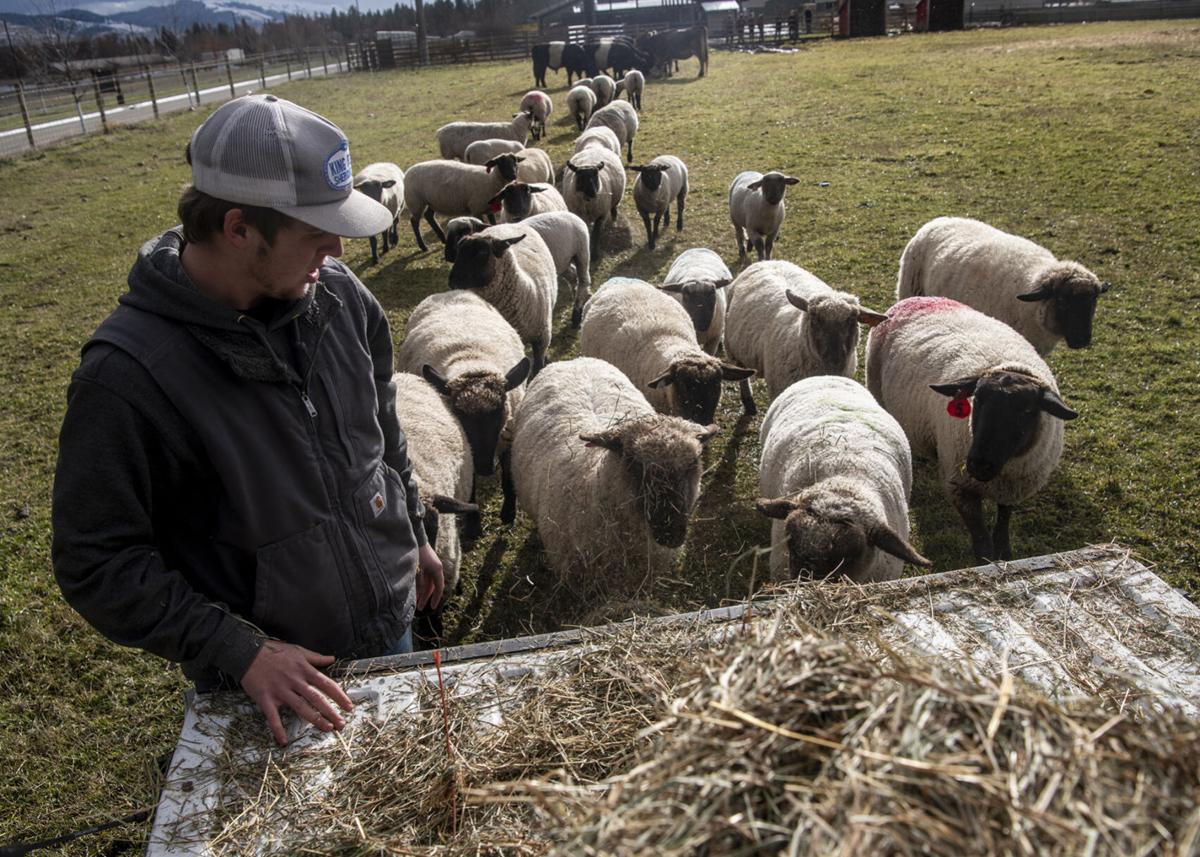 Colter McWilliams, a senior at Big Sky High School, feeds the sheep and Belted Galloway cattle, seen in the back, at the Missoula Agricultural Center on Thursday afternoon. Students from Big Sky started a new class this week, learning hands-on experience taking care of pigs, sheep and cattle. 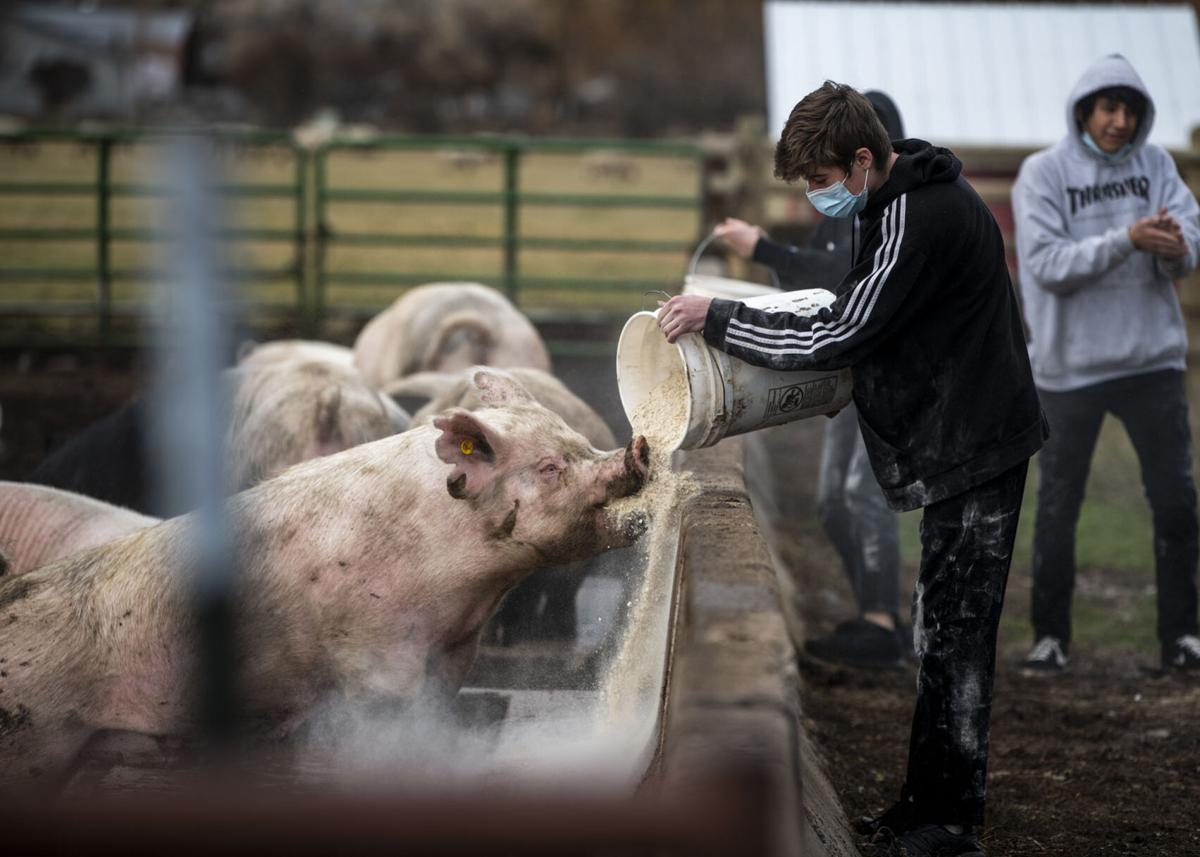 Cole Rhods, a student at Big Sky High School, feeds pigs during a class at the Missoula Agricultural Center. The goal of the program is to teach students where their food comes from. 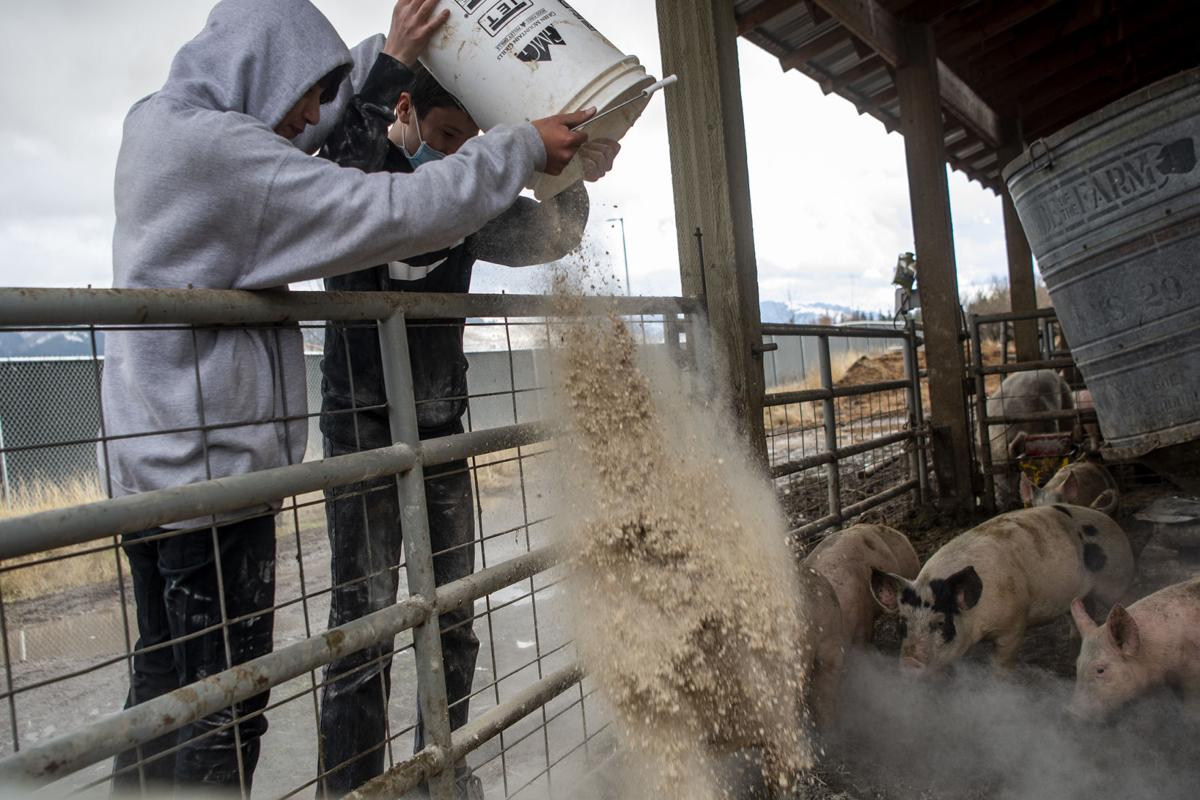 Big Sky High School students took time out of the conventional classroom Thursday to cut their teeth as agriculture enthusiasts on 100 acres in the middle of Missoula.

It was their first day of class at the Missoula Agricultural Center and the freshmen and one sophomore trudged through mud filled rain puddles to see newly weaned Belted Galloway calves together in the barn.

The Belted Galloway calves are long-haired bovine traditionally from Scotland that do better in colder temperatures, he said. Some call them "Oreo cows," and that's what they look like with a black and white color scheme. The young ones, Andres said, will take a while to get used to being without their mothers.

The Galloways are a new addition to the center. They were picked up in June from Illinois, and while they aren’t as sought after because of their long hair, Andres said, it’s nice to be part of the heritage breed.

Andres has taught at the Agricultural Center for around 14 years and said the tradition of the 100-acre farm is to teach students where their food comes from.

"From conception to consumption," he said, students from Hellgate High School, Sentinel High School and Big Sky High School get the chance to enroll as freshman in an agricultural class to learn hands-on experience with the animals from feeding and caring for pigs, sheep and cattle to the potential slaughter.

The Agriculture Center classes include a science-based curriculum surrounding agriculture, construction and industry as well as some veterinarian science.

"There's not a single kid here that come from an agricultural production background," Andres said, and he's not either. He grew up in Missoula and was also a member of the agriculture program and FFA, the Future Farmers of America. He wanted to come back to the area and teach what he felt made an impact on him as a student.

“Even if they choose not to go into agriculture, at least they’ll have a respect for where their food comes from,” he said.

It’s also a cultural introduction, he said, as green freshman learn the traditions of the history of Montana agriculture.

Andres said that some kids who are enrolled in FFA in addition to the class may have the opportunity to show and sell sheep, pigs or cows and make enough money to pay for their first year of college.

It’s an investment since the program doesn’t back the kids, he said, but it’s rewarding especially when students can develop a profit along with their passion.

Out with the animals, Andres instructed the kids to feed some of the cattle, so they grabbed buckets of chow and walked to the other side of the barn with older students watching over them.

Colter McWilliams, 17, a senior, stood in the barn with his cow. He started working at the center in the seventh grade in part of FFA and now he said it feels good to be one of the older kids helping with instruction, especially when his younger brother is in the group.

“It feels good to pass it on,” he said. Ranching for him is something he hopes to do when he graduates. His grandparents own some land in Dixon, and while they sold off the herd, he hopes to keep the tradition going.

“It’s a lot of work, but you get a lot of reward for it,” he said, adding that he breeds Angus and Herefords.

Seventeen-year-old senior at Big Sky Kadin Kammerer grew up in Missoula and also said that he started younger as a participant and has plans to start his own herd.

The two spoke on their experience in class and in FFA and said that now they were able to get jobs at the center and hope that the younger students stick with it as well.

From 7 a.m. to sometimes 9 p.m., the work varies, Kammerer said. Maybe they feed and work on the waterlines, but the work depends mostly on what’s needed.

“I like it,” he said. I like spending my time out here. Sometimes I don’t wanna go home.”

Two men, one who was recently suspected in a Flathead Valley homicide and allegedly bought meth from the Aryan Brotherhood, are facing federal drug and firearms charges.

Colin Cox has always loved animals. The soon-to-be junior at Big Sky High School said that growing up, he begged his parents to have pets.

Colter McWilliams, a senior at Big Sky High School, feeds the sheep and Belted Galloway cattle, seen in the back, at the Missoula Agricultural Center on Thursday afternoon. Students from Big Sky started a new class this week, learning hands-on experience taking care of pigs, sheep and cattle.

Cole Rhods, a student at Big Sky High School, feeds pigs during a class at the Missoula Agricultural Center. The goal of the program is to teach students where their food comes from.