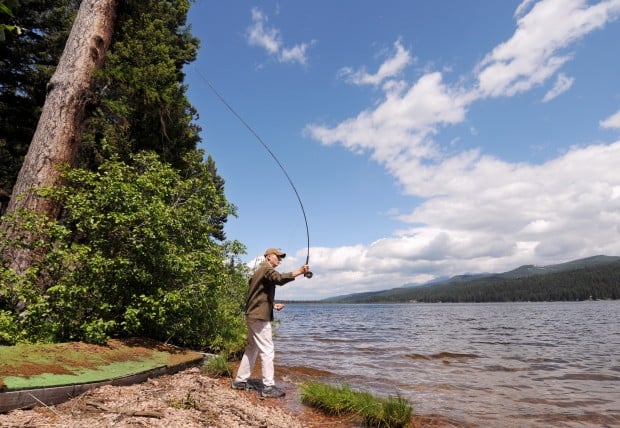 John Maclean has been fishing all his life. You could say fishing is in his blood. John’s father, Norman Maclean, who wrote “A River Runs Through It,” called his son “one of the finest fishermen, I’m sure, of his generation.” So it was with great regret back in 2005 that John accidentally killed the largest cutthroat trout he had ever caught. It has bothered him ever since. 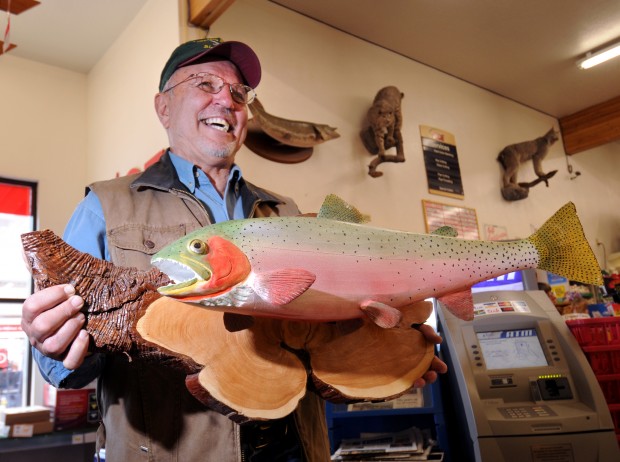 Working from a photograph that Maclean shot of the mammoth fish before it died, Seeley Lake wood craftsman Jeff Wisehart sculpted this 28-inch-long wooden replica of the trout. It is on display at Rovero’s Ace Hardware in Seeley Lake. 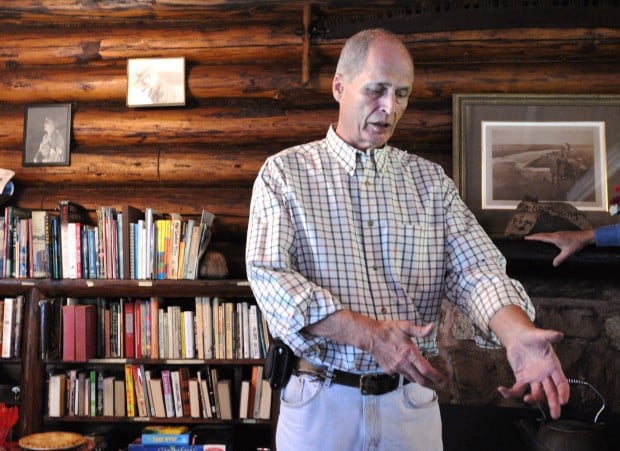 Maclean tells his fish story last week at the family cabin on the bank of Seeley Lake. “The whole point of this for me is to try to get some kind of reconciliation for an event that still bothers me,” says Maclean. 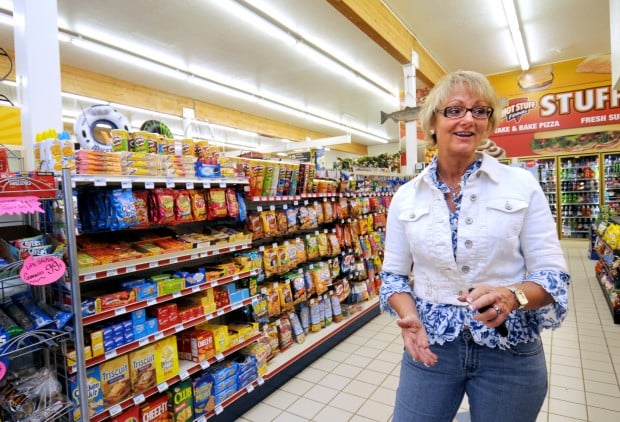 Adrienne Marx was honored when Maclean asked if she would display the fish sculpture at her hardware store in Seeley Lake.

By KIM BRIGGEMAN of the Missoulian

SEELEY LAKE – A man named Maclean caught a big fish in these waters a few years back.

The cutthroat must have weighed 9 pounds, and it was at least 27 inches long – the largest he’s ever seen or heard of in Seeley Lake.

When John Maclean went to release the fish, it sank straight to the bottom, probably the victim of a heart attack or a stroke.

The story might have ended there, on that October evening in 2005. But his is a family that famously blurs the line between religion and fly fishing. To Maclean this bordered on sin.

“This fish has had a lot of impact on me,” Maclean said the other day.

He was at his family’s historic log cabin on the west shore of Seeley Lake, where he’d stopped for a short summer visit and to help serve breakfast at the Seeley Volunteer Fire Department’s Fourth of July pancake feed.

Maclean’s late father Norman would have kept the trout to eat, the 69-year-old author allowed.

But he’s a different fisherman these days.

And so Maclean enlisted a budding local artisan, Jeff Wisehart, and Addrien Marx to “resurrect” his trout.

Today Wisehart’s eye-fetching replica hangs on the wall of Rovero’s, Marx’s store in Seeley Lake. Its body is carved of western cedar, its tail of redwood and the fins are quaking aspen.

The model hangs not far from a mount of an even larger northern pike, of a kind that Maclean laments has all but destroyed the trout fishery in the lake.

Marx said the cutthroat display and its story have helped visitors to her store make the connections between Seeley Lake and Norman Maclean’s far-rippling 1976 novella, “A River Runs Through It.” People worldwide who can’t find Montana on a map know about the Maclean family and the Blackfoot River’s haunting waters through the book and the 1992 movie that Robert Redford made from it.

She knows this firsthand, Marx said. She hiked the Inca Trail in Peru five years ago and at one camp her fellow trekkers were swapping tales of other trails they’d conquered. When it came Marx’s turn, all she could offer were the walks she’d made to Morrell Falls.

Where’s that? they wondered. She told them of the mountains of western Montana. When that didn’t ring enough bells, Marx asked if any of them had heard of “A River Runs Through It.”

“Here were these kids from five different countries and every single one of them had seen the movie,” Marx said.

Now another Maclean has another fishing story to share, and Marx is glad to help. They invited the local weekly and daily newspapers and a Missoula TV station to the Maclean cabin last week to tell it.

“The impact of a tiny fish – well, a large fish – floating to the bottom of the lake is, to me, just growing,” Marx said.

She said one of her favorite words is “synchronicity.” It has to do with what Norman Maclean was getting at when he wrote, “Eventually, all things merge into one.”

Marx said she met Norman Maclean, who died in 1990, and she’s been a friend of John Maclean for years. He lives in Washington, D.C., and regularly makes visits to the Montana cabin that his father and uncle Paul helped their father build as teens in 1921 and 1922. Unlike Norman, John doesn’t come here to write – too many distractions just outside the window.

A former diplomatic correspondent and editor for the Chicago Tribune, Maclean was part of the press corps that trotted the globe with Secretary of State Henry Kissinger during the Nixon and Ford administrations.

Now he researches and writes of wildfire disasters in the U.S. His fourth book, on the deadly 2006 Esperanza fire in Southern California, goes to the printer next month and will be out in January.

“What has really struck me through these years is John’s humanity,” Marx said. “For all the worlds that he’s seen, he slides so beautifully back into this country, into its natural beauty, and he has such reverence for it.”

So the emotion in Maclean’s voice didn’t surprise her last summer when he was telling Marx his “big fish” story over dinner at Trixie’s in Ovando.

“One of the photographs at the end of ‘A River Runs Through It’ is of his dad out here in the boat, in solitude, fishing quietly. I had a background image of John in the foreground and his dad in the background,” Marx said.

Jeff Wisehart died six years ago, and it changed his life.

The former teacher and principal at Valley Christian School in Missoula had run 15 marathons, but that didn’t keep his heart beating when the attack hit. Doctors who’d left high-profile positions to come to Montana to be near fly-fishing streams hastily hooked him to a defibrillator at St. Patrick Hospital.

“To be perfectly honest with you, I felt a sense of peace that I’ve never felt in my life, ever,” he added.

When he awoke, he looked up at the faces that surrounded him.

“They pulled the paddles off me, and I said, ‘I thought those things were black.’ ”

It wasn’t until two weeks ago that Wisehart got the doc’s OK to train for a marathon again. In the interim, he retired, moved to the Double Arrow Ranch in Seeley with wife Natalie and, two years ago, started fooling around with wood.

“It’s therapy,” Wisehart said. “I’ve always considered myself a patient man – I mean, you can’t be an administrator and not be patient. But I’ve never had anything teach me patience as much as woodworking.

“I get anxious and I want to hurry up and see what it looks like, and every time I rush I screw it up.”

Before Maclean tried to release the big trout that October evening nearly seven years ago, he took two bad photographs. Normally cutthroat will lie still in your canoe, he said. “And when you take out your camera they almost look up at you and smile, beautifully.”

This one neither posed nor held still – until it hit the water again. He speculates that the stress of the half-hour fight to land the behemoth and its sedentary lifestyle on the bottom of the lake led to its sudden demise.

All Maclean had left of the fish to show Wisehart were the two photographs. Wisehart, a virtual neophyte in the art of wood carving, was wary when he took on the job. He’d never carved anything so big, he had other projects in the queue, and he understood how much the project meant to Maclean.

But Maclean was comfortable with his choice of sculptors, especially the fact that Wisehart didn’t use plastic pre-forms.

“He was carving his things from wood, from scratch, and they were beautiful,” he said.

After months of trials and corrections, and 11 pages of email exchanges with Maclean, Wisehart finished the fish last winter.

Coloring was an issue. Maclean’s catch had been a bland silver hue. After consultation, Wisehart went with its high spawning colors.

“Jeff’s argument convinced me,” Maclean said. “He said when you’re laid away, the undertakers don’t try to make you look like you’re 87 years old. They’ll put you in your World War I uniform and rouge your cheeks and make you look good. Why not make it look good on the way out? That worked for me.”

Wisehart learned as he went. He discovered that using dental instruments to create fish scales was onerous on such a large fish. So he soaked bridal veil and laid it on the fish, pulling it off before it dried.

“John’s fish was the guinea pig for me,” Wisehart said. “It was truly a labor of love, and it took forever, and anybody who’s an artist in any way, shape or form wonders if the owner is going to like it.”

The owner’s verdict: It too is beautiful – a favored Maclean word.

What it was, he said, was “a very unfortunate accident.”

“But I’ve looked at enough fires to realize that unfortunate accidents have a lot of resonance beyond the accident.”

What started as a bit of lore about Missoula’s “A River Runs Through It” family could soon become a new backcountry landmark.

The Norman Maclean Trail doesn’t even exist on a map yet, but it’s got lots of folks between Missoula and Seeley Lake excited about its potential.

If you come to a certain bend in the Big Blackfoot River above the mouth of Belmont Creek on a summer morning, you’ll glimpse the rhapsody of …

John Maclean has been fishing all his life. You could say fishing is in his blood. John’s father, Norman Maclean, who wrote “A River Runs Through It,” called his son “one of the finest fishermen, I’m sure, of his generation.” So it was with great regret back in 2005 that John accidentally killed the largest cutthroat trout he had ever caught. It has bothered him ever since.

Working from a photograph that Maclean shot of the mammoth fish before it died, Seeley Lake wood craftsman Jeff Wisehart sculpted this 28-inch-long wooden replica of the trout. It is on display at Rovero’s Ace Hardware in Seeley Lake.

Maclean tells his fish story last week at the family cabin on the bank of Seeley Lake. “The whole point of this for me is to try to get some kind of reconciliation for an event that still bothers me,” says Maclean.

Adrienne Marx was honored when Maclean asked if she would display the fish sculpture at her hardware store in Seeley Lake.