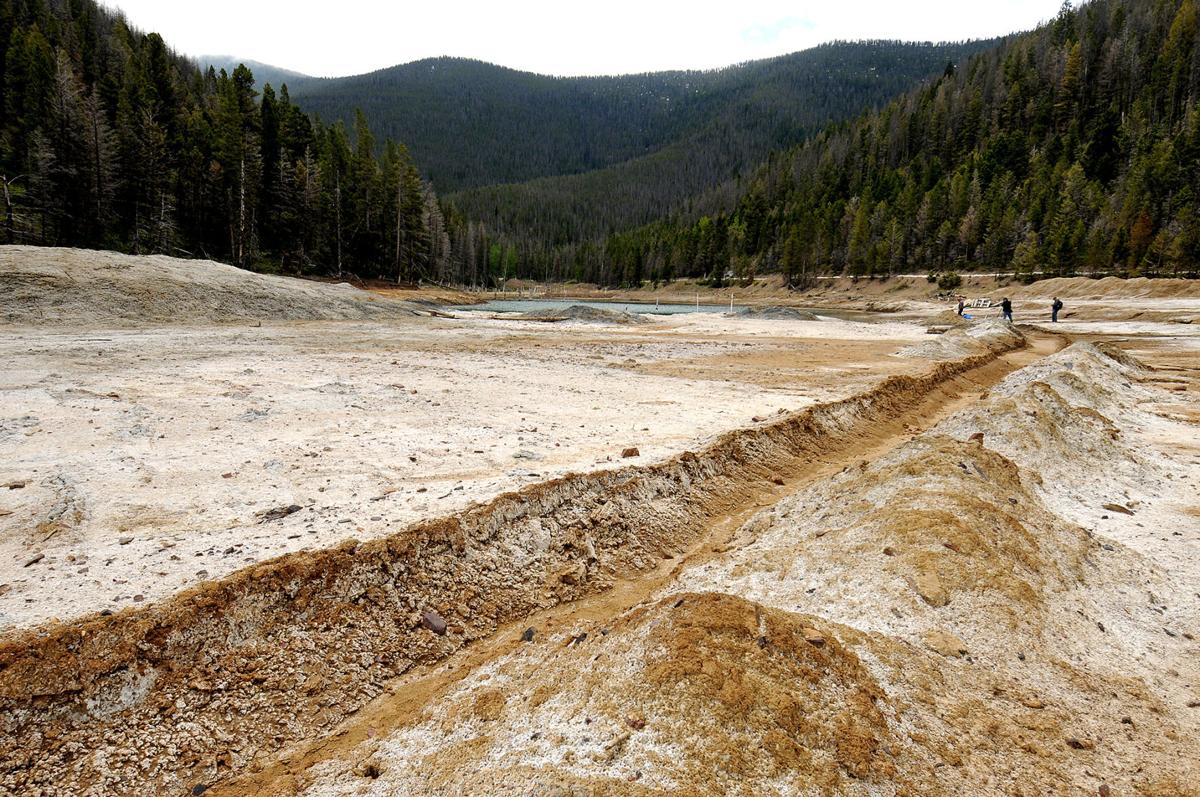 Reclamation of the Mike Horse Dam area is seen in a photograph from 2014. The decade-long restoration project is completed, with the contaminated mining waste removed and the floodplain and stream channel restored. 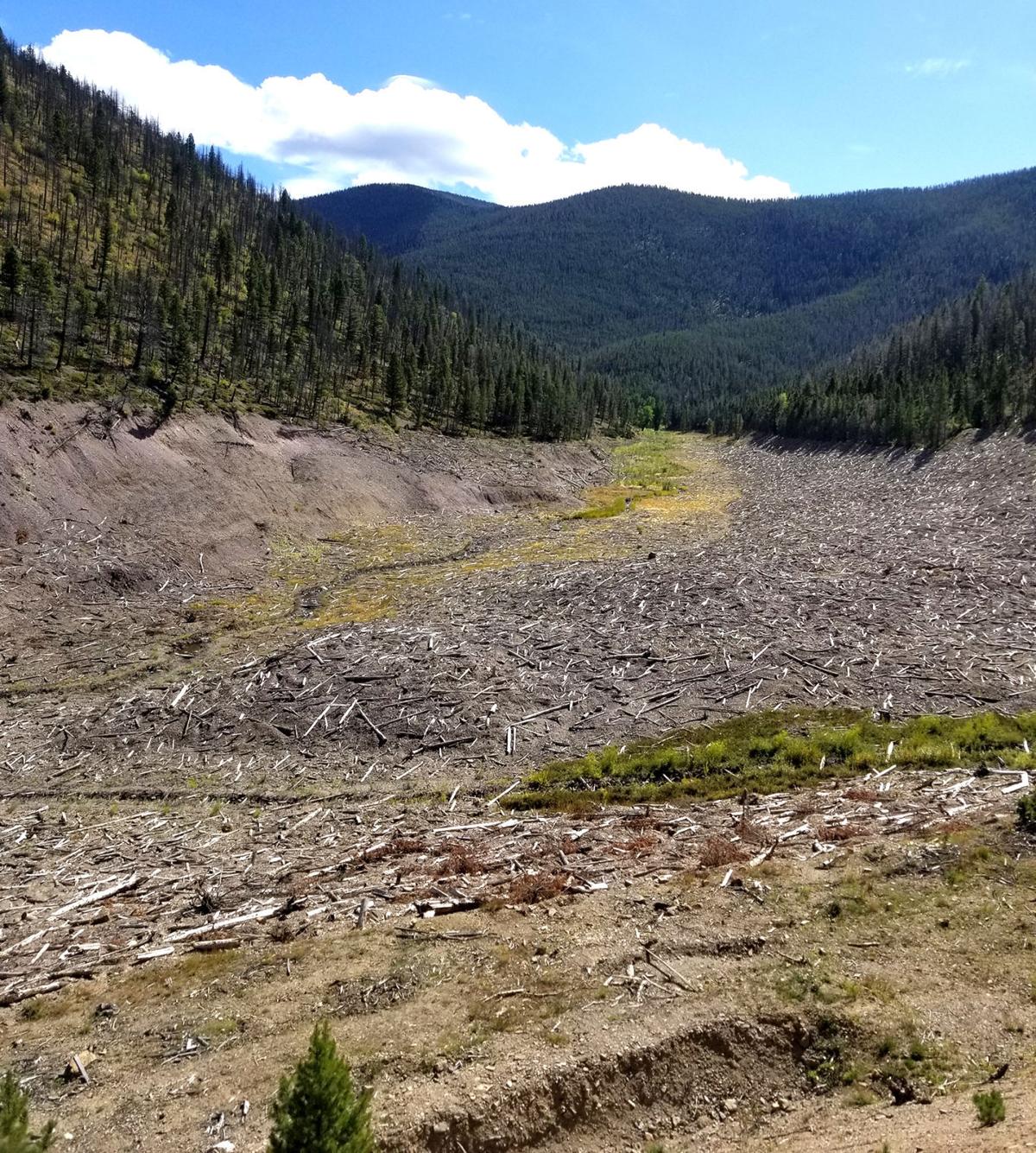 The Mike Horse Dam and tailings impoundment site is seen after the removal and restoration.

The once-polluted waters of the Upper Blackfoot Mining Complex, where vegetation was thinning and aquatic life non-existent, are now seeing signs of life again after a decade-long restoration project concludes.

“The response has been swift and positive," said Beau Downing, the restoration project manager from the Montana Department of Justice’s Natural Resource Damage Program. if you hadn't been up there before the stuff was gone and saw it when it was void of life.”

The streams and floodplains below the Mike Horse Dam were contaminated with mining waste after the dam flooded in 1975, sending more than 200,000 cubic yards of mine tailings, the leftover materials after mining companies separate the valuable components from the unwanted ones, into the river and nearby streams.

That resulted in deposits of zinc, copper, arsenic, cadmium, lead, aluvium and iron getting into the watershed. David Bowers, the project manager for the mining complex representing the state Department of Environmental Quality, explained that the various metals dumped by the mines are toxic to aquatic environments.

“The areas that we worked in the Blackfoot River — the Beartrap Creek and Mike Horse Creek environments — were void of aquatic insects (and) fish,” Bowers said. “They were basically dead reaches of stream and river.”

The sparse vegetation, lack of aquatic life and even the way metals would change the water’s color all indicated the level of pollution. Alluvium made the water white and copper made it turquoise.

Bowers said the project has been in the works since 1993 and he’s been a part of it since 2002. It wasn’t until they settled a claim with Atlantic Richfield Co. and ASARCO LLC, companies that own many of the mining facilities that caused the contamination, for $39 million that they had the funding to do the restoration project.

Work started in 2010, bringing in anywhere from 25 to 40 workers from around Montana in any given season to consult, operate the machinery, and manage the site over the course of 10 years. They expected to remove half a million cubic yards of mine tailings and waste. By the end, they doubled that.

For the first half of the reclamation, they used large construction equipment and machinery to dig out the waste, remove the dam and transport it all to a mine waste repository where it was contained and sealed from any outside exposure. Bowers explained that letting the mine tailings and waste go through wet and dry cycles causes metal salts to form. Those get flushed into the streams and rivers when it rains. With the repository’s liner they don’t have to worry about that problem.

Steve Opp, the on-scene coordinator with the United States Forest Service, said it was necessary to remove the whole Mike Horse Dam with the rest of the reclamation because it could erode and cause more pollution over time. it also presented a risk of flooding again. In 2011, heavy spring rains almost produced a repeat of the 1975 flood that caused most of this damage in the first place.

The second half of the project was about restoring the area to a livable and sustainable environment again.

“We were importing clean material and building a floodplain and a stream channel from scratch,” Downing said. “You took the contamination away and you left behind essentially a blank rock slate that had to be built back up in a way that could support not only aquatic life in the stream channel, but provide the terrestrial benefits on the floodplain.”

They added compost to the soil, laid willow cuttings in the stream banks and seeded the area. Once they had clean water flowing through the streams again, fish and aquatic insects started to come back. He said two types of fish that have shown up are the native westlope cutthroat trout and non-native Eastern brook trout.

And he said, once they shut down the site and all of the humans, heavy equipment and noise left, the land animals came out, too. Downing said at the beginning of last year he found wolf tracks in the snow around the newly developed floodplain.

By 2020 most of the work was done, but they did finish planting new vegetation and seeding in the fall and now they just have to monitor the site.

“I've been fortunate enough to be able to take my kids up there and have them walk the floodplain and see fish and enjoy the site since it was opened back up,” Downing said.

Now that the restoration is complete the land is open to the public again. Opp said recreation for fishers, hikers, hunters and even eventually ATVers will be open this year. He said there should also be interpretive kiosks set up on the land with information about the mining and restoration project.

“I'm elated that the work is done,” Opp said. “But I'll be honest, I will miss going up there because it was a great place to be with good people.”

“I'm still sort of in mourning,” Downing added. “It ended up being so much a part of your professional, and even somewhat your personal, life. To put so much time and dedication into a place and to have to walk away from that after that is difficult.”

Bowers, the veteran of the group, said it was fascinating to think back on all of the time, money and work that went into making it all happen. He also said that major support for the project came from stakeholders, from the Lincoln Chamber of Commerce to Montana Fish, Wildlife & Parks. But ultimately it was all for the Montana people.

“To see where it's at today is very rewarding,” Bowers said. “It's definitely a lifetime achievement. A lifetime memory. Like my daughter likes to say, I am the janitor of the environment.”

'More of a jewel': Crown of the Continent's borders expanded

LINCOLN — The 13 million-acre Crown of the Continent officially just grew by 496,164 acres, the equivalent of 775 square miles.

The strange life of H.M. Kleinschmidt

It was nothing short of heroic what H.M. Kleinschmidt did that cold, clear night 65 years ago.

A western Montana woman was convicted Friday of killing her ex-boyfriend in May 2018 amid a protracted custody dispute over their daughter.

Here we are: Missoula group brings diversity to the outdoors

The 20 participants stood in a circle, their bundled snow clothes and keen energy keeping them warm.

Reclamation of the Mike Horse Dam area is seen in a photograph from 2014. The decade-long restoration project is completed, with the contaminated mining waste removed and the floodplain and stream channel restored.

The Mike Horse Dam and tailings impoundment site is seen after the removal and restoration.